The Nutcracker ballet is a holiday tradition for so many families. This year we attended a beautiful performance of the Nutcracker presented by the Goh Ballet and marveled at the music, pageantry, and classic story. But for many families, a trip to the ballet just isn’t in the cards, so here’s your chance to bring home Disney’s dazzling adventure The Nutcracker and the Four Realms on January 29, 2019. 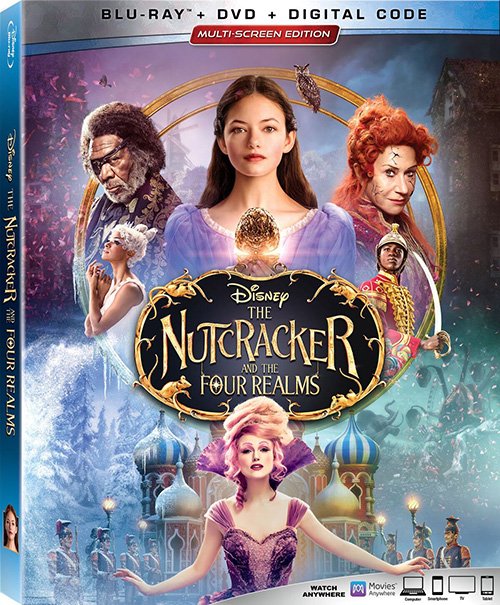 The Nutcracker and the Four Realms is available on Digital and Movies Anywhere, and on 4K Ultra HD, Blu-ray, and DVD on January 29.

Pick up your copy of The Nutcracker and the Four Realms on Amazon!

To be clear, this is an original story inspired by the beloved ballet “The Nutcracker” based on E.T.A. Hoffmann’s classic tale. The movie includes the iconic Nutcracker Suite by Tchaikovsky, a beautiful ballet number starring Misty Copeland as the Ballerina Princess, and a host of familiar characters like Clara, Fritz, Drosselmeyer, the Nutcracker (though this version is a captain in the guard instead of a prince), the Sugar Plum Fairy, and the Mouse King, but don’t expect a faithful retelling of the ballet.

In The Nutcracker and the Four Realms, Clara (Mackenzie Foy) travels along a golden thread, presented at Drosselmeyer’s (Morgan Freeman) annual party, eagerly searching for a one-of-a-kind key that will unlock a music box that holds a priceless gift. When she enters a mysterious parallel world, Clara encounters a Nutcracker soldier named Phillip (Jayden Fowora-Knight), a gang of mice and three Realm regents, including the Sugar Plum Fairy (Keira Knightley). Ultimately, she must brave the ominous Fourth Realm, home to the tyrant Mother Ginger (Helen Mirren), to retrieve the key and return harmony to the unstable world. 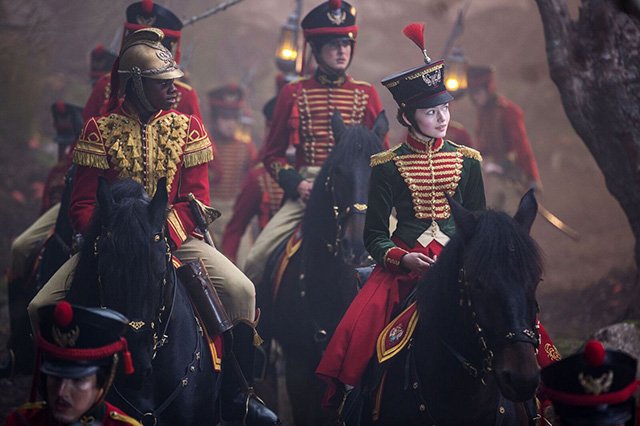 It’s never clear how Clara’s mother visited the Four Realms or what happened after she left, and I do wish we had gotten a bit more background here. Anyway, it turns out that the Sugar Plum Fairy isn’t exactly who we thought she was (maybe eating some of her own cotton candy hair was a red flag?), but Clara uses her understanding of physics and tinkering to escape and turn the tables on Sugar Plum.

This visually stunning film is filled with rich, opulent costumes and elaborate architecture that underscore the magic of the Four Realms. Misty Copeland’s enchanting ballet sequence midway through evokes the charm of the original ballet and is particularly exquisite. 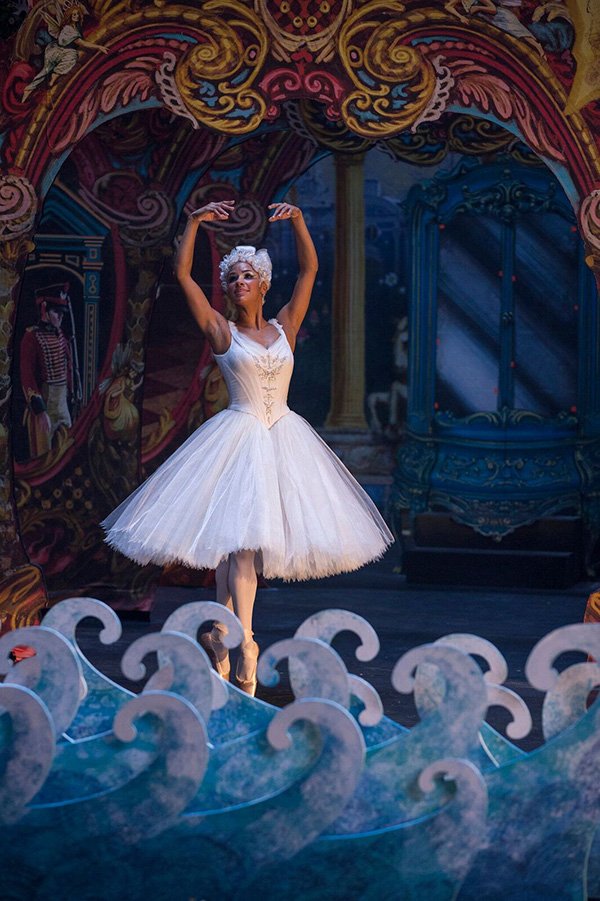 Parents of younger children should be aware of a scary scene early on when Clara first discovers the Four Realms and she is carried off by the Mouse King, a hulking yet sinuous body formed from thousands of CG mice. Later in the film, Clara and the Nutcracker enter the Fourth Realm (formerly known as the Land of Amusements) populated by hordes of those aforementioned mice, menacing carnival clowns, and a giant mechanical replica of Mother Ginger. Young children will likely find the creepy carnival atmosphere frightening.

Bonus features include a discussion with American Ballet Theatre’s Misty Copeland about her role as the enchanting Ballerina Princess, her personal history with “The “Nutcracker” ballet, and her inspirational and historic rise within the world of dance. Extras take viewers on the set of “The Nutcracker and the Four Realms” to meet both new and reimagined characters, and discover how the Land of Sweets, Land of Snowflakes, Land of Flowers and mysterious Fourth Realm were created to such dazzling effect. Deleted scenes provide a look at magical moments that didn’t make the final version of the movie.

Win The Nutcracker and the Four Realms on Blu-ray

I’ve got two copies of The Nutcracker and the Four Realms to give away to a pair of lucky readers. Enter in the giveaway widget below. This giveaway is open to residents of Canada and the U.S., 18+. All the winner’s entries will be verified.

Disclosure: I received a sample item to facilitate this review. All opinions expressed are completely honest and my own, based on my personal experience. Your experience may differ. This post contains affiliate links. As an Amazon Associate I earn from qualifying purchases, at no additional cost to you.