Owlkids Books for the Holidays | This West Coast Mommy

You already know how much we love books. They inspire, educate, and entertain, and the holidays wouldn’t be complete without a few books under our tree. Canadian children’s book publisher Owlkids Books kindly offered to let us share some of our favourite new releases and back catalogue books with you as part of our Gift Guide. Take a look at some of Owlkids Books’ most engaging children’s books, then scroll all the way down to enter to win this same collection for your own kiddos!

When Planet Earth Was New by James Gladstone & Katherine Diemert 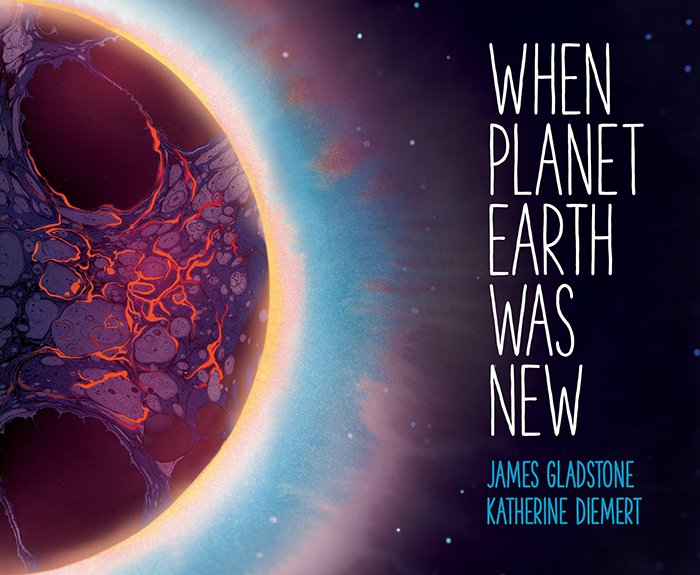 This stunning picture book manages to condense billions of years of change and evolution on planet Earth into sixteen striking watercolour spreads. These astonishing paintings illustrate how our planet has changed – from molten rock and a poison gas atmosphere to the formation of oceans, the slow evolution of plants and animals beneath and above the ocean, and the very late arrival of humans on the scene. Each page has a brief free verse describing some of these major transformations occurring over time. 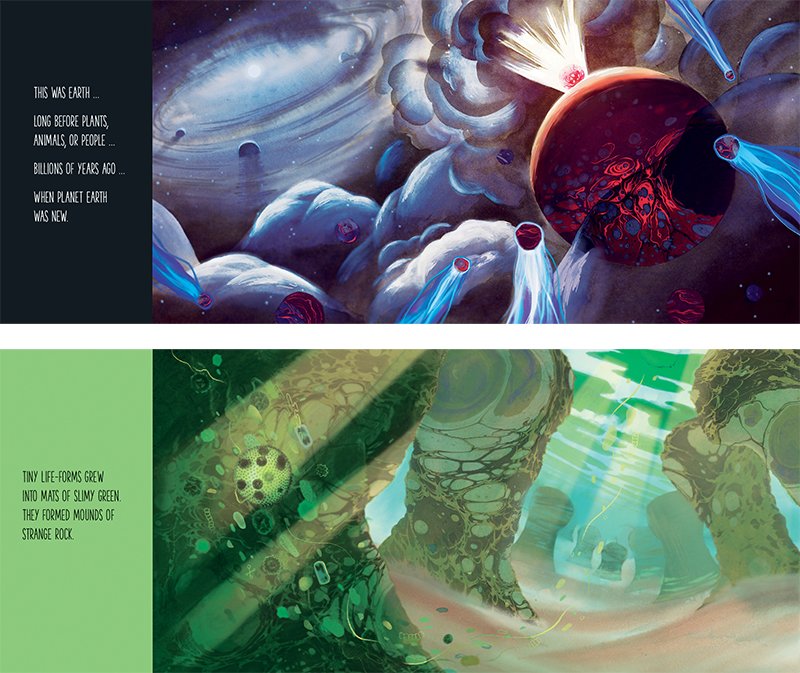 When Planet Earth Was New reminds me of the Timeline of the Universe poster used in Montessori classrooms (the first Great Lesson) to help children understand geologic time and to place human history and Earth’s history within the larger context. There isn’t much detail to be found, but this book is designed to inspire and encourage further scientific inquiry rather than instruct directly. Think of it as a springboard to further discovery and discussion.

The last spread shows all the pages again in thumbnail form with some further notes about what is happening in each painting. At the end of the book is a glossary, Author’s Note, and list of source books and websites to explore further. This is one of my favourite books of the season, and I hope my girls will be just as excited when they find it under the tree. (Suggested ages 5-9.)

Letters to a Prisoner by Jacques Goldstyn 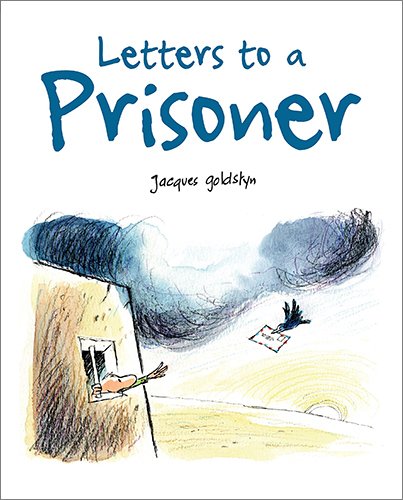 Inspired by Amnesty International’s letter-writing campaigns, Letters to a Prisoner is the wordless story of a man jailed for expressing his opinion. Told in ink sketch cartoons and watercolours only, the story opens with a father and daughter attending a peaceful demonstration together. At the protest, the man is assaulted, arrested, and thrown into jail by government soldiers. 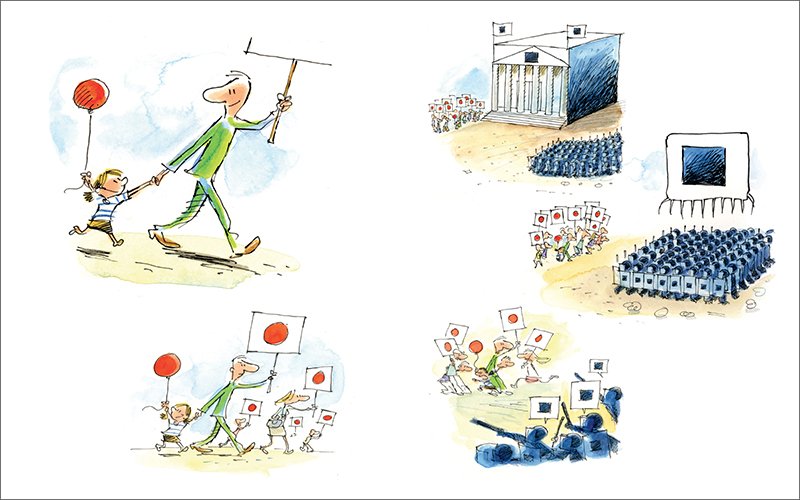 Alone in his cell, the man begins to lose all hope until a bird delivers a letter from someone on the outside. Reading the letter literally shines light into his dark cell. The prison guard destroys the first letter, but the bird continues to deliver them. When the angry guard confiscates and burns them all, the smoke sends an S.O.S. signal far and wide inspiring people around the globe to write to the prisoner. More and more letters arrive and flood the prison until the man escapes on wings made from those letters to rejoin his daughter. This was a moving and inspiring story, easily understood by both my daughters and suitable for helping children understand the importance of free speech and the work that Amnesty International does. (Suggested ages 6-10.)

Sizing Up Winter by Lizann Flatt 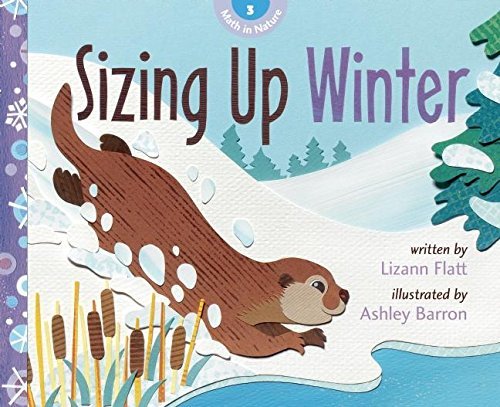 Are snowflakes all the same size? How do deer mice measure distance? Can weasels track the days of the week? The friendly collage illustrations invite young children to think about measurement in a different way. Using snowy landscapes and winter-loving animals, as the units of measurement, Sizing Up Winter explores basic numeracy concepts like counting, distance, length, depth, volume, mass, and time. (Suggested ages 4-7.) 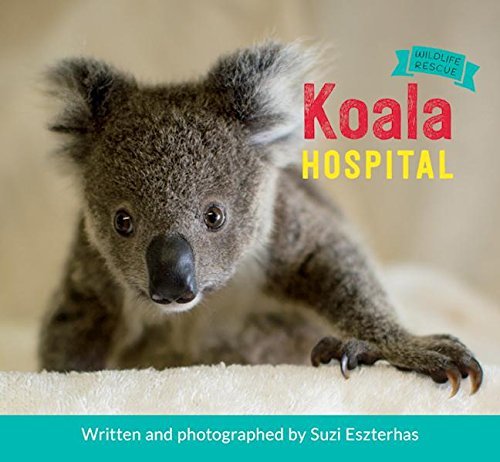 Koala Hospital is the first book in Owlkids Books’ Wildlife Rescue series. This volume takes us behind the scenes in a rescue centre for orphaned, wounded, and sick koalas in Port Macquarie, Australia. Beautifully illustrated with wildlife photographer Suzi Eszterhas’ full-colour photos of fuzzy, cuddly koalas and their caregivers, readers will learn about some of the circumstances that lead to koalas coming to the hospital. As koalas share the same environment as people, they can fall victim to cars, pet dogs, and illness. Kids will learn about the medical care given to these marsupials and how the team fosters and teaches orphaned babies to get them ready for a return to the wild. Finally, the book ends with information about koala conservation efforts and tips for kids interested in helping koalas and local wildlife at home.

We love books that help us raise kids to understand the importance of conservation and to become good global citizens. This whole series is a big hit with me and with my girls. A portion of the royalties from this book is donated to the Koala Hospital in Port Macquarie, Australia. (Suggested ages 7-10.) 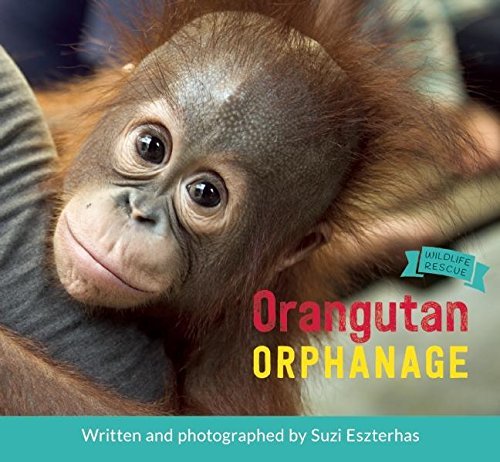 In this second volume of the Wildlife Rescue series, we visit the Orangutan Care Center and Quarantine in Borneo. Featuring Suzi Eszterhas’ stunning photography, we learn about the sad fact of poachers attempting to steal baby orangutans which often leaves them orphaned. Baby orangutans wear diapers, drink formula from a bottle, have regular baths, and require around the clock love and care just like human babies. Foster parents commit to caring for a baby orangutan for up to eight years or longer! They will also teach their orangutan babies to climb, find food, and navigate the forest in preparation for returning to the wild.

Like the previous volume, the book closes with information about the orangutan’s status in the wild and what work is being done to preserve their habitat. Kids can also learn ways to help orangutans themselves and animals in their own backyards. A portion of the royalties from this book is donated to the Orangutan Care Center and Quarantine in Borneo. (Suggested ages 7-10.) 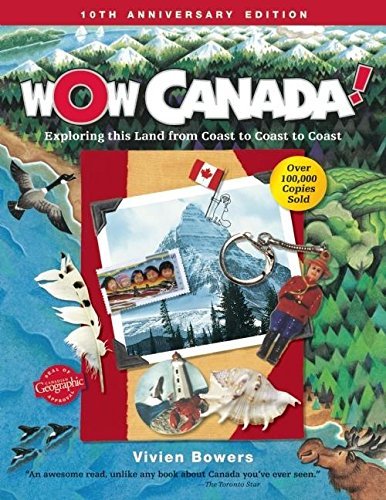 This tenth anniversary edition of Wow Canada! is a little older now (published 2010), but still a great resource. Readers will join eleven-year-old Guy and his family on a fantastic cross-country road trip from the Pacific Coast, across the Prairies, through Ontario and Quebec, into the Maritimes, and then up north. Each chapter covers one of Canada’s ten provinces and three territories and starts with an illustrated map highlighting the province’s landmarks and wildlife, provincial flag, provincial arms, and provincial flower. 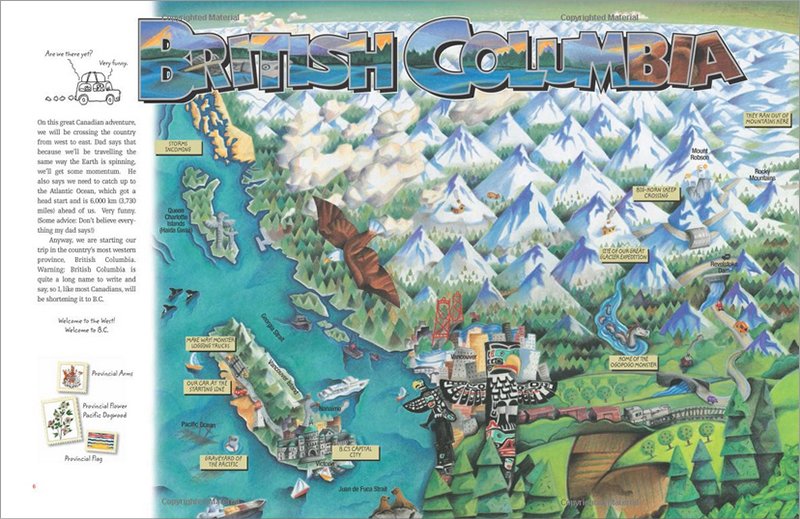 The busy pages pack in a lot of information scrapbook style with humourous doodles, photos, comic strips, postcards, slides, dried flowers, road trip survival tips, and more. Because there’s so much more to Canada than can possibly be contained within these pages, each chapter ends with a list of things to do and places to see next time – fodder for future research. 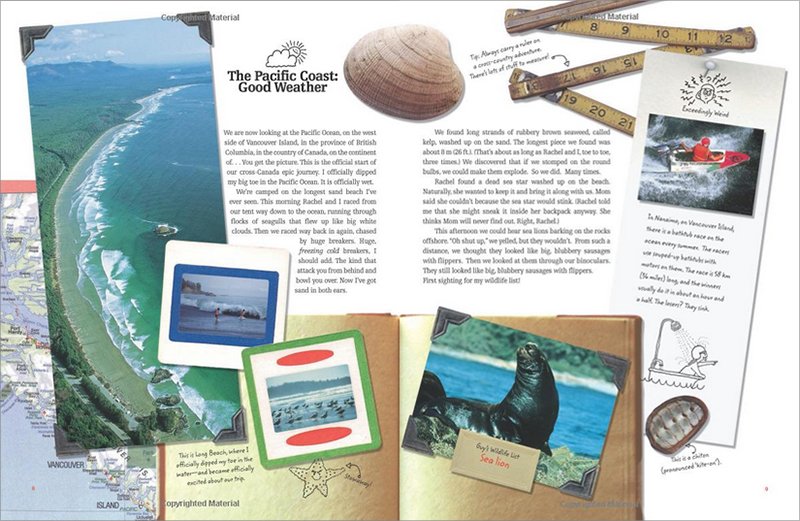 The last section of the book lists a summary of basic demographic information on each province and territory. What does Nunavut mean? How did Saskatchewan get its name? Learn all the capital cities and other major cities in each province or territory, their major industries, provincial symbols, and what makes each province/territory unique. I did notice a distinct lack of material about Canada’s First Nations peoples until the second-to-last chapter on Nunavut. Despite this, I would still recommend this as an engaging guidebook for children to plan next summer’s road trip and learn the basics about each province’s history, major cities, tourist attractions, natural features, wildlife, foods, interesting Canadian trivia, and more along the way.  (Suggested ages 8-12.)

The Book of Languages: Talk Your Way Around the World by Mick Webb 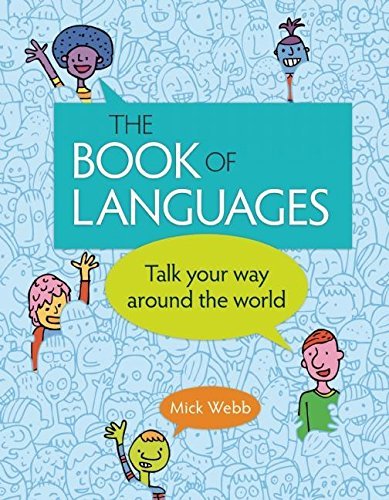 Did you know that around the world, humans speak almost 7,000 languages? Wow! This book starts with an introduction to the importance of language and its development, then offers a cursory overview of 21 languages around the world, from Arabic to Zulu, organized within language families. Each spread introduces one world language with a brief history, linguistic map, how to say the numbers from one to 10, common greetings, and some conversational phrases like “Hello, how are you?” and “I’m fine, thanks.” The last section covers sign languages, semaphore, Morse code, and animal communication.

No, your child won’t be able to hold a conversation, but this book just might encourage their curiosity about other people and help them appreciate the differences between us. Besides, being able to say hello in 20 other languages is a great way to make friends around the world! (Suggested ages 8-12.) 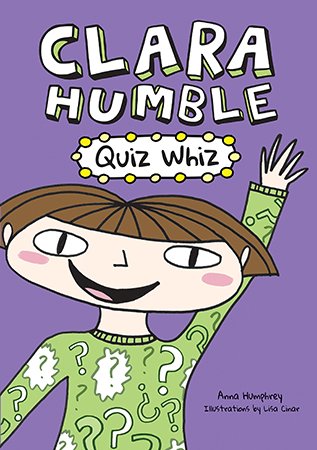 We really enjoyed Humphrey’s first book, Clara Humble and the Not-So-Super Powers (see our review here), so we were eager to read the second installment. This time, she’s competing in her favourite game show, Smarty Pants, against her best friend Bradley for a thousand dollar prize. Much of the action takes place at the game show where the contestants must answer trivia questions while completing physical challenges at the same time. The game show setting is a lot of fun. For example, the kids must answer trivia questions about dairy products while drinking a bottle of chocolate milk from an extra long straw. But get the question wrong and get squirted with chocolate pudding!

The competition gets ugly with the boys and the girls sabotaging each other both on the show and at school. Clara and Bradley’s friendship may be over. Will the two friends do the right thing? Who will win the game show in the end? Illustrated with Clara’s own doodles and comics, this is a fun and satisfying read for middle school kids. (Suggested ages 8-12.)

Win a Mini Owlkids Books Library for the Holidays!

One lucky This West Coast Mommy reader will win all eight of the children’s books reviewed in this post, courtesy of Owlkids Books! 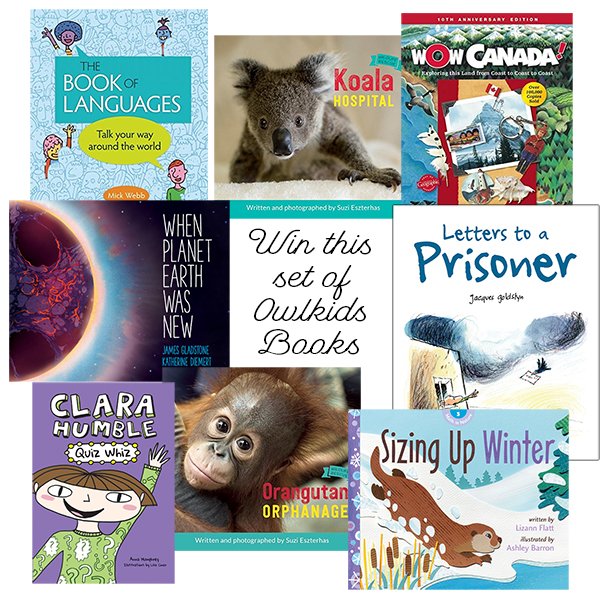 Enter to win in the giveaway widget below. This giveaway is open to residents of the US and Canada, 18+. All the winner’s entries will be verified. Prize delivery is not guaranteed by Christmas, so please plan accordingly.

Disclosure: I received sample items for review. All opinions expressed are completely honest and my own, based on my personal experience. Your experience may differ. This post contains affiliate links. This West Coast Mommy is a participant in the Amazon Services LLC Associates Program, an affiliate advertising program designed to provide a means for sites to earn advertising fees by advertising and linking to Amazon.com.