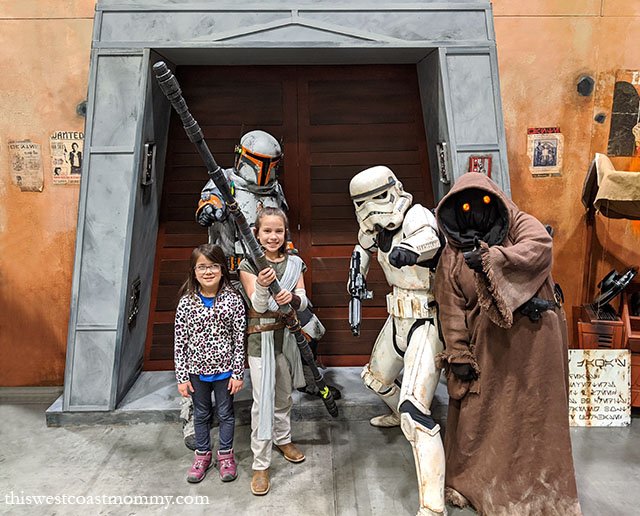 May the 4th be with you!

How are you celebrating Star Wars Day this year? We’re all at home anyway, so the fans in my house will be watching Star Wars movies, working on their current Star Wars LEGO projects, looking for their favourite characters in our collection of DK Star Wars reference books, and possibly having an epic lightsaber battle when the sun goes down.

DK Books kindly sent us a few more Star Wars volumes to fill my daughters’ need for everything Star Wars, and we wanted to share them with you for your young (and not-so-young) fans at home as well. 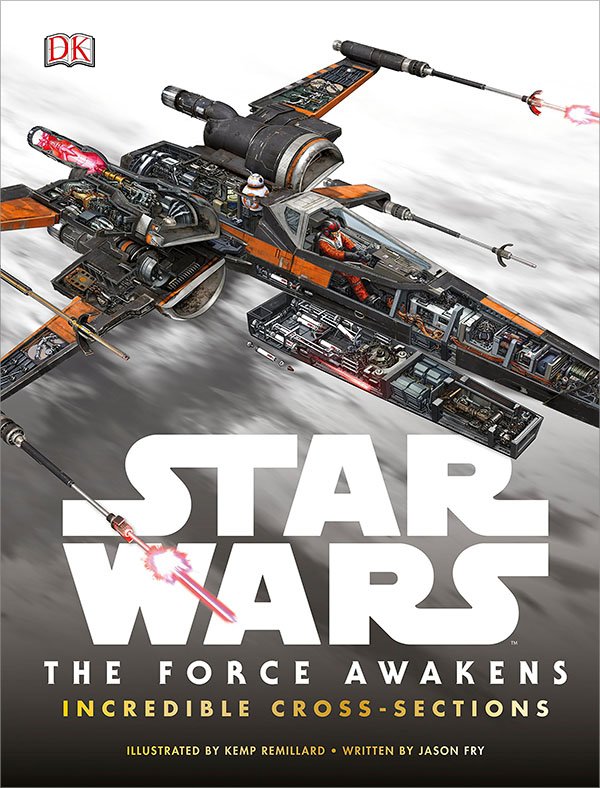 Like other books in the Incredible Cross-Sections series, this extra large hardcover has extra large pages to capture as much detail as possible. This book covers the following vehicles from 2015’s Star Wars: The Force Awakens: a stormtrooper transport, Poe’s X-Wing, a command shuttle, the Star Destroyer Finalizer, Rey’s speeder, a TIE fighter, a Special Forces TIE fighter, a quadjumper, the Millennium Falcon, Han’s freighter, a Resistance transport, and a snow speeder. 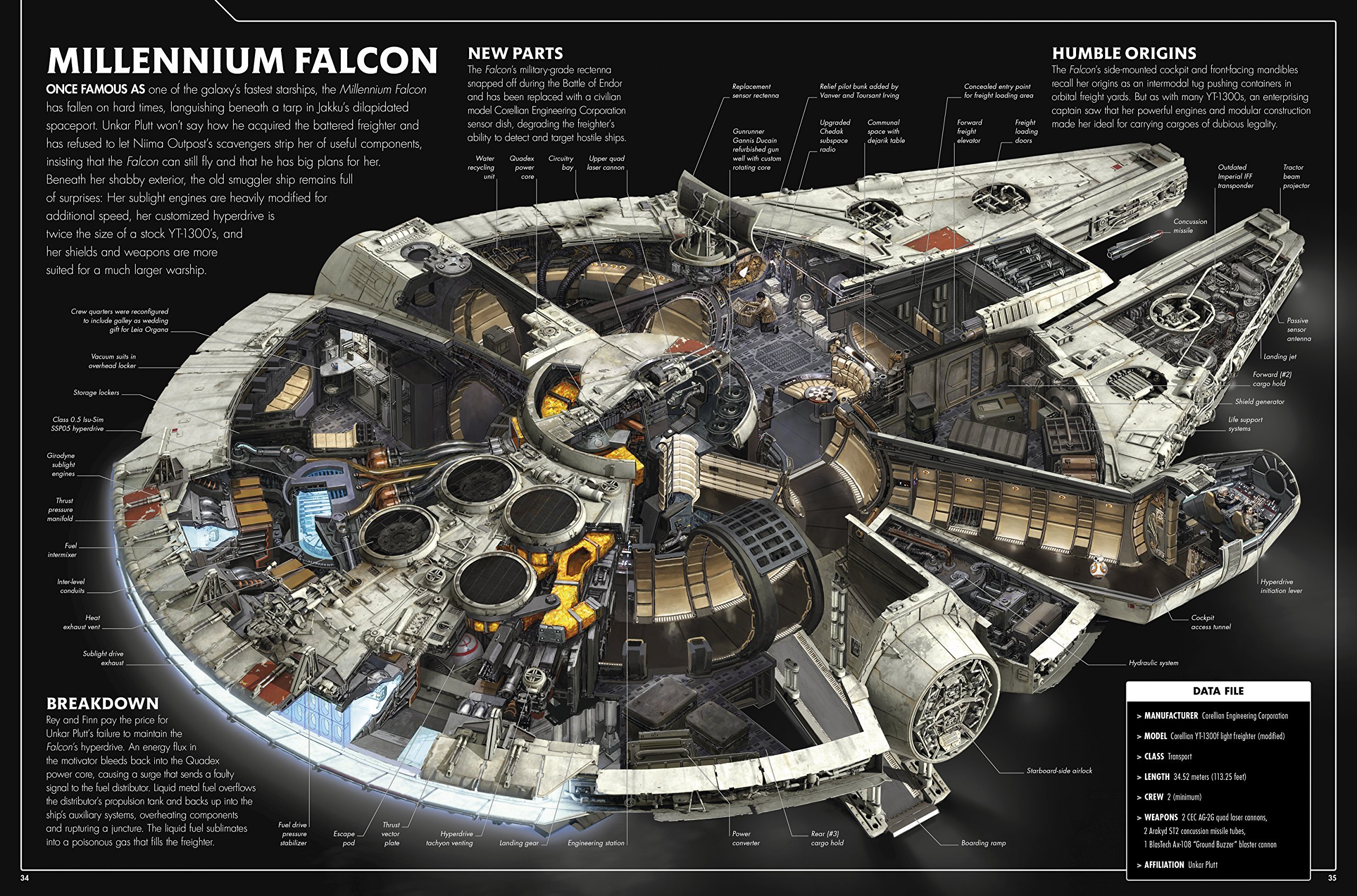 Each spread introduces the vehicle’s backstory and key features, while intricate cross-sections provide an unparalleled number of details inside and out. Quick reference Data File boxes give manufacturer, model, class, length, crew, weapons, and affiliation for each vehicle. The most impressive cross-section is the four-page center fold out spotlighting Kylo Ren’s First Order Star Destroyer flagship, Finalizer, in exhaustive detail. 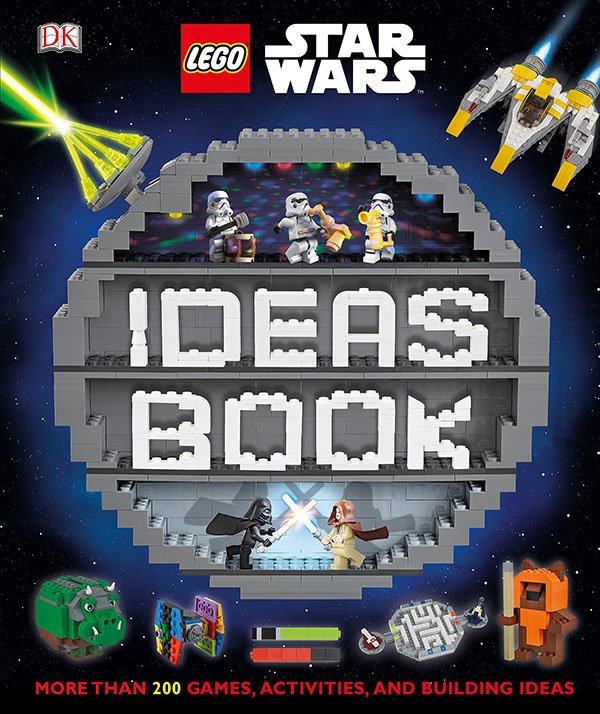 Find a galaxy full of LEGO® Star Wars™ ideas to build – from activities and art, games and challenges, to practical makes and your very own inventions!

Inspired by the Star Wars universe, this hardcover book is packed with over 200 activities and building ideas to inspire young Star Wars and LEGO fans. From customized Star Wars podracers and miniature movie sets, to a Star Wars inspired locking safe and pencil case made out of LEGO bricks, there’s hours and hours of LEGO fun to be had. A whole Challenge chapter will show kids how to build games like Star Wars bingo, battle droid bowling, and pin the arm on the wampa.

This book doesn’t include step-by-step instructions like those that come in a typical LEGO set. Instead it contains ideas. Labelled diagrams suggest using certain pieces to get a specific look or effect, but the models are better seen as inspiration for kids to exercise their own creativity. For example, the book shows a Boba Fett mosaic portrait that kids can either recreate brick for brick or use as a jumping off point for their own creations. 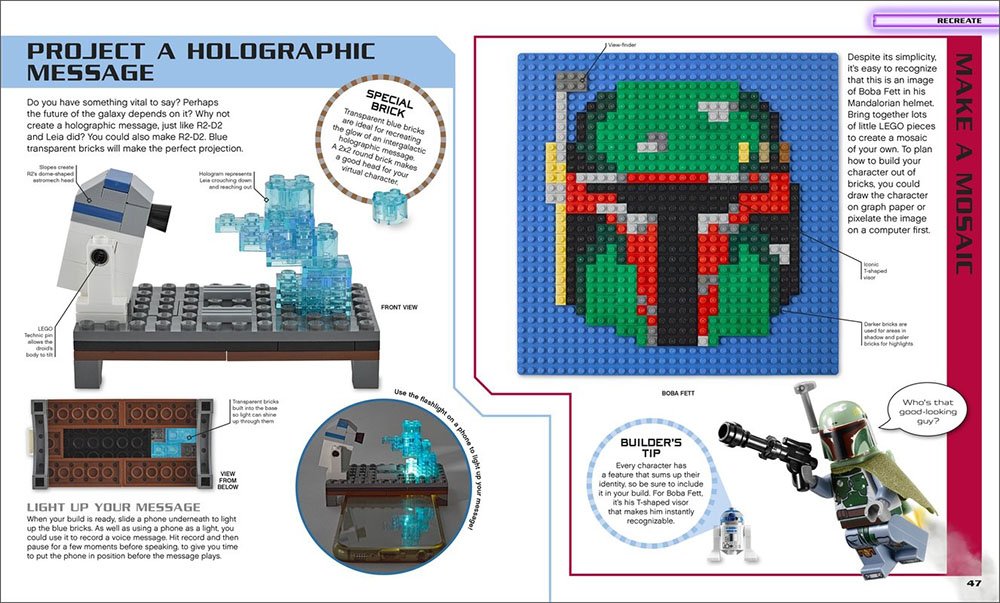 Build the Coruscant City skyline, recreate Anakin’s goggles, design your own mix and match droids, create a wookiee catapult. and more! Special Brick bubbles and Builder’s Tips on each page provide more help and guidance for smart building. There are no LEGO bricks included, so this book is best for kids who already have a lot of LEGO to play with. 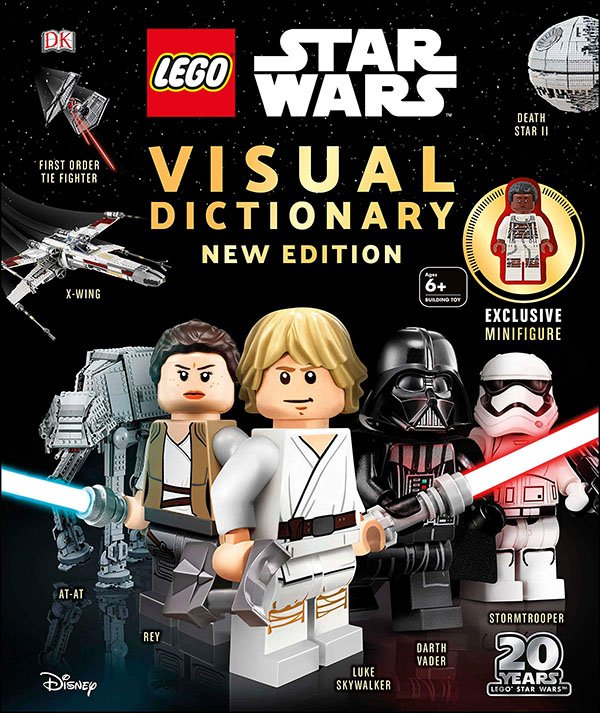 Published last year for the 20th anniversary of LEGO Star Wars, this updated and expanded edition of LEGO Star Wars: The Visual Dictionary is a must for any fan. It comes with a new chapter covering the Rise of the First Order and an exclusive Finn minifigure in his leaking bacta suit from The Last Jedi. Compared to the last 2014 edition, this updated version adds sets from Rogue One, Solo, Star Wars: Rebels, and the Episodes VII and VIII. It doesn’t have the Minifigure Gallery anymore, presumably as DK has released a separate LEGO Star Wars Character Encyclopedia for those.

The hardcover starts with a timeline highlighting some of the most significant LEGO Star Wars sets and milestones since 1999. The first three chapters covers sets and minifigures organized by trilogy – the Fall of the Republic (Episodes I-III), the Galactic Civil War (Episodes IV-VI, Rebels, Solo, Rogue One), and the Rise of the First Order (Episodes VII-IX). Chapter 4 turns to specialist sets like the Microfighters line made from an average of 100 bricks, LEGO Technic, and buildable figures. The final chapter, Beyond the Brick, shows fans how sets, vehicles, and minifigures are designed and created by the LEGO Star Wars creative team. 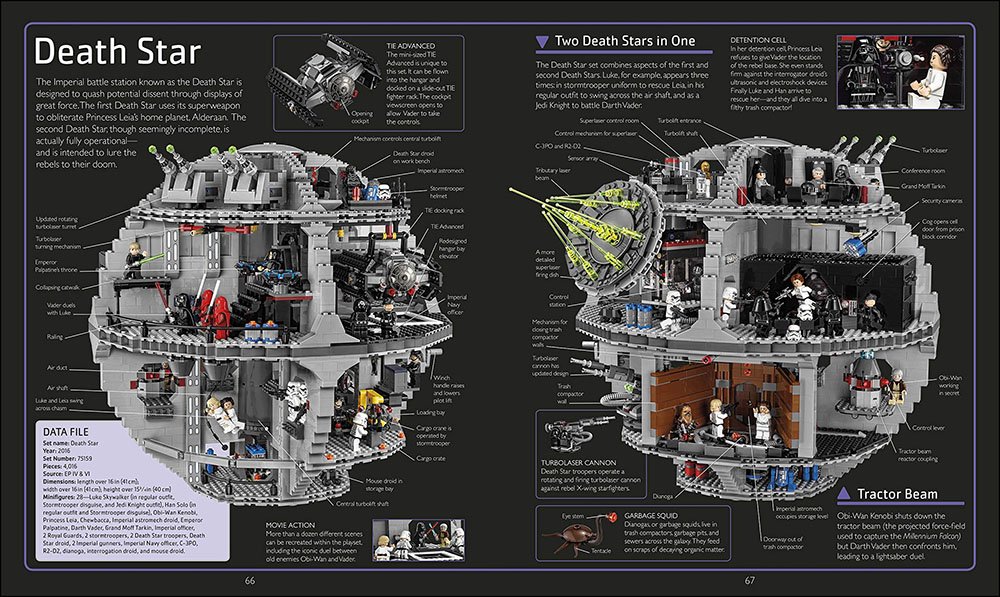 Each set featured in the book includes a quick reference data box with the set’s official name, year released, LEGO identification number, number of pieces, and the source that inspired the model. Larger sets also include the dimensions of the completed set and the minifigures that come with it. Our favourite sets to look at include the Ewok Village set Tee received for her 6th birthday, the Millennium Falcon that opens up like a blooming onion to see inside, and the 4000-piece Death Star we’ve been working on since Christmas. 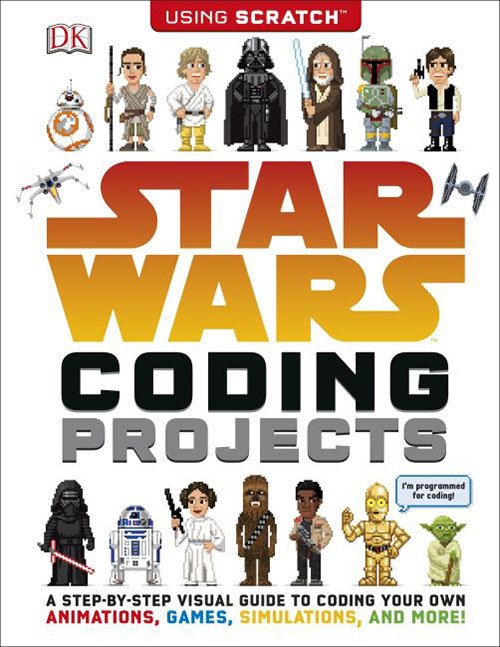 Don’t worry, neither you nor the kids need any prior coding experience. Step-by-step instructions and screenshots will walk them through creating six different games and help them build their confidence and coding skills as they complete each. Avoid the evil robot in the cargo bay, create a droid workshop, practice your jetpack skills in a training simulator, capture Kyber crystals just by moving your hand, take on a secret spy mission, and fly your ship through an asteroid field. 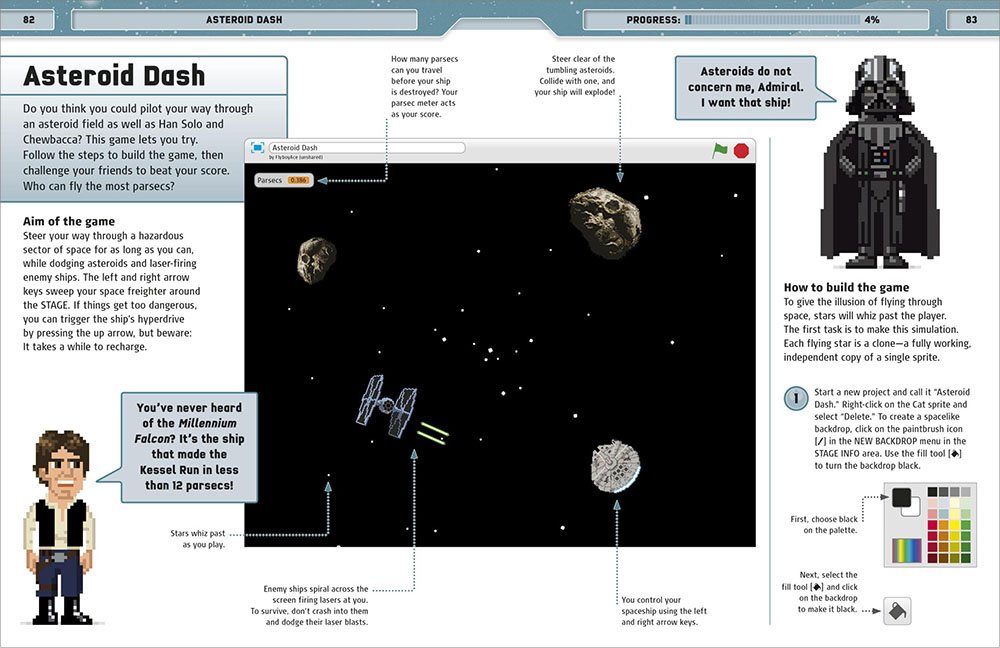 Be aware that the Star Wars graphics seen in the book are not officially available in Scratch. The book suggests that kids either use the default Scratch cat character image or draw their own Star Wars art. Tee was pretty disappointed to discover there was no link to download the Star Wars art used throughout the book, but you can search “Star Wars coding projects” in Scratch and use the remix function to reuse images other people have shared for this purpose.

Another thing to note is this edition is from 2017 and uses Scratch 2.0. The current online version is Scratch 3.0 though, so there are some minor changes in the appearance and user interface that could be a little confusing to kids. It wasn’t difficult to generalize the instructions to the newest version of Scratch, you can download Scratch 2.0 from the website and install it on your computer so it exactly matches what you see in the guide.