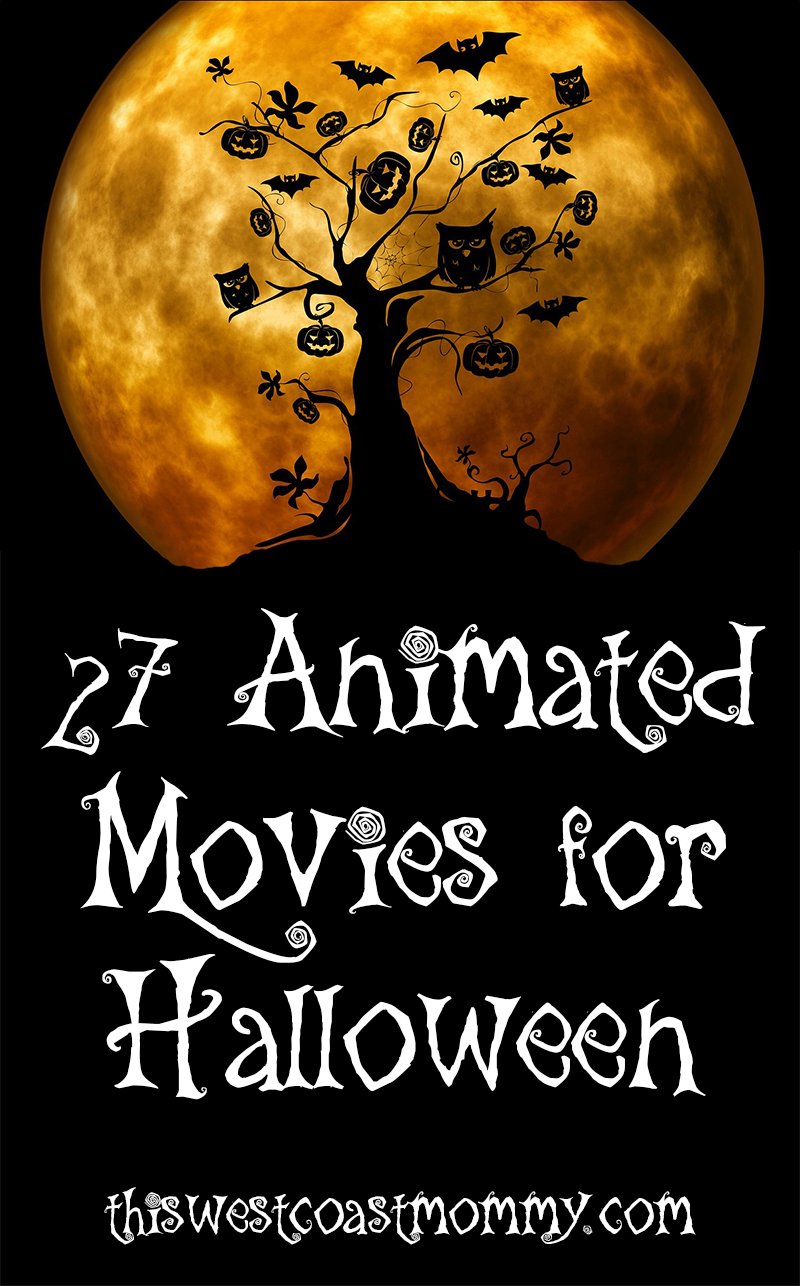 If you’re looking for some spooky movies to watch this month, here’s the ultimate list of animated movies perfect for viewing with the entire family! I’ve organized them according to suggested age, but you know your child best and what level of spookiness they can handle. My ratings are based on my personal judgement, my own kids’ scare tolerance, and info from Common Sense Media (one of my go-to resources before letting my kids watch a movie I haven’t already seen). Enjoy!

These movies are aimed at the preschool crowd and should be safe for all but the most sensitive kiddies. 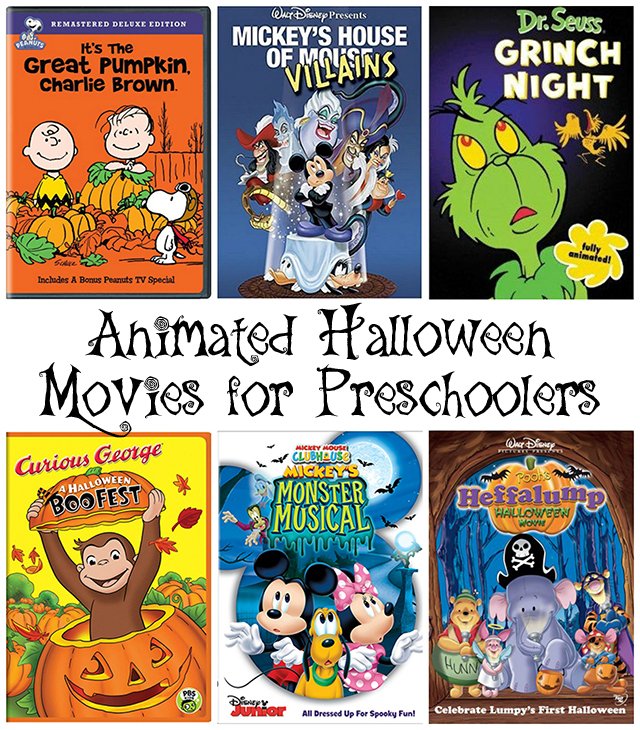 It’s The Great Pumpkin, Charlie Brown! (1966)
In this Peanuts classic, the gang celebrates Halloween with trick-or-treating and a party while Linus waits in the pumpkin patch for the Great Pumpkin to arrive.
BUY HERE

Mickey’s House of Villains (2002)
The best meet the baddest when Mickey Mouse comes face-to-face with the Disney villains everyone loves to hate. Mickey Mouse, Minnie Mouse, Donald Duck, Pluto and Goofy have their hands full when the wicked Jafar teams up with Cruella, Hades, Ursula, Captain Hook, Maleficent and all of the other dastardly villains in a wild attempt to turn the House of Mouse into the House of Villains.
BUY HERE

Halloween is Grinch Night (aka: Grinch Night) (1977)
The Grinch is back! When the sleepy peace of Whoville is disturbed by the howling sour-sweet wind signalling the arrival of Grinch Night, one brave little boy, Eukariah, sets out to save his town.
BUY HERE

Curious George: Halloween Boo Fest (2013)
Autumn is here, bringing colorful leaves, hay rides, pumpkin patches, and the annual Boo Festival. After hearing about a legendary scarecrow who steals hats, the inquisitive monkey and his friends set out to find him.
BUY HERE

Pooh’s Heffalump Halloween Movie (2005)
It’s a hilariously haunting Halloween in the Hundred Acre Wood. Roo’s best new pal, Lumpy, is excited to trick-or-treat for the first time … until Tigger warns them about the dreaded Gobloon, who’ll turn you into a Jaggedy Lantern if he catches you. But if they catch the Gobloon before it catches them, they get to make a wish!
BUY HERE

Mickey Mouse Clubhouse: Mickey’s Monster Musical (2015)
Visit the creaky castle of kindly Count Mickula and help the Clubhouse pals solve a puzzling riddle: Who, or what, is making a curious clanging, banging noise? With the right Monster Mouseketools and help from YOU, this mystery will soon be history!
BUY HERE

There are lots of great choices for kids in this age group. Here are some of my favourites that we’ve enjoyed together as a family. 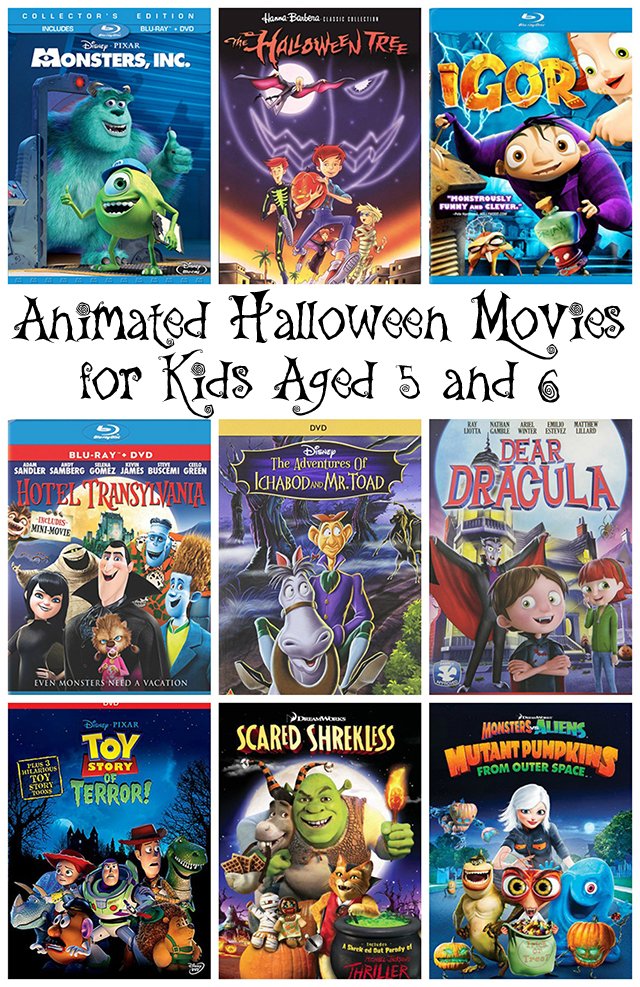 Monsters, Inc. (2001)
Lovable Sulley and his wisecracking sidekick Mike Wazowski are the top scare team at Monsters, Inc., the scream-processing factory in Monstropolis. When a little girl named Boo wanders into their world, it’s the monsters who are scared silly, and it’s up to Sulley and Mike to keep her out of sight and get her back home.
BUY HERE

The Halloween Tree (1993)
Sit on the edge of your seat and enjoy master storyteller Ray Bradbury’s classic adventure of four youths who try to save the spirit of their friend Pip from the ghosts of Halloween past. The four encounter a mysterious character, Moundshroud who takes them on a magical journey that sweeps them back as far as 4,000 years and touches down in exotic places all over the world like Egypt, England, France and Mexico. Along the way they discover the magic and meaning of Halloween – and friendship.
BUY HERE

Igor (2008)
Determined to prove he can create his own diabolical invention, a mad scientist’s nice-guy assistant Igor creates a female Franken-monster. But Eva turns out to be sweet, kind, and friendly, not a monster at all. When she falls into the clutches of Dr. Schadenfreude and his shape-shifting girlfriend, it’s up to Igor and his sidekicks to save Eva and their country from real evildoers.
BUY HERE

Hotel Transylvania (2013)
Welcome to Hotel Transylvania, Dracula’s lavish five-stake resort, where monsters and their families can live it up and no humans are allowed. One special weekend, Dracula has invited all his monstrous friends to celebrate his beloved daughter Mavis’s 118th birthday. For Dracula catering to all of these legendary monsters is no problem, but the party really starts when one ordinary guy stumbles into the hotel and changes everything. With 3 sequels, there’s lots of Hotel Transylvania fun to be had!
BUY HERE

The Adventures of Ichabod & Mr. Toad (1949)
Two animated Disney adaptions of those classic tales “The Legend of Sleepy Hollow” and “The Wind in the Willows.”
BUY HERE

Dear Dracula (2012)
What happens when Sam, a monster movie buff, writes a letter to Dracula instead of Santa? Dracula shows up at his door! Chaos ensues as Sam tries to help Dracula regain his confidence and learn to scare again.
BUY HERE

Toy Story of Terror (2013)
What starts out as an exciting road trip for the Toy Story gang takes an unexpected turn for the worse following a detour to a roadside motel. After Mr. Potato Head suddenly disappears, his friends find themselves caught up in a hilarious mystery that must be solved before they suffer the same fate!
BUY HERE

Scared Shrekless (2011)
It’s Halloween night, and Shrek’s family is celebrating by scaring trick-or-treaters. Shrek claims that nothing can scare an ogre because ogres are “the kings of Halloween”. To prove him wrong, Donkey proposes a challenge to see who can tell the scariest story, but Shrek amps it up by choosing to hold their contest in Lord Farquaad’s abandoned castle Duloc.
BUY HERE

Monsters Vs. Aliens: Mutant Pumpkins from Outer Space (2009)
Susan Murphy (a.k.a. Ginormica) and the Monsters are now working with the US government as special ops. So when an alien presence is detected in Susan’s hometown right before Halloween, the team is dispatched to investigate. Everything appears normal, right down to the jack-o-lanterns peering out from every doorstep and windowsill. But when Halloween arrives, those innocent-looking carved pumpkins reveal themselves for what they really are: mutant aliens!
BUY HERE

These movies are just a little bit scarier, though my 5-year-old has watched several of these with no issues. As always, you be the judge of what your kids can handle. You may have noticed several movies in this batch from Tim Burton, Master of the Macabre. You can never go wrong with a Tim Burton movie for Halloween! 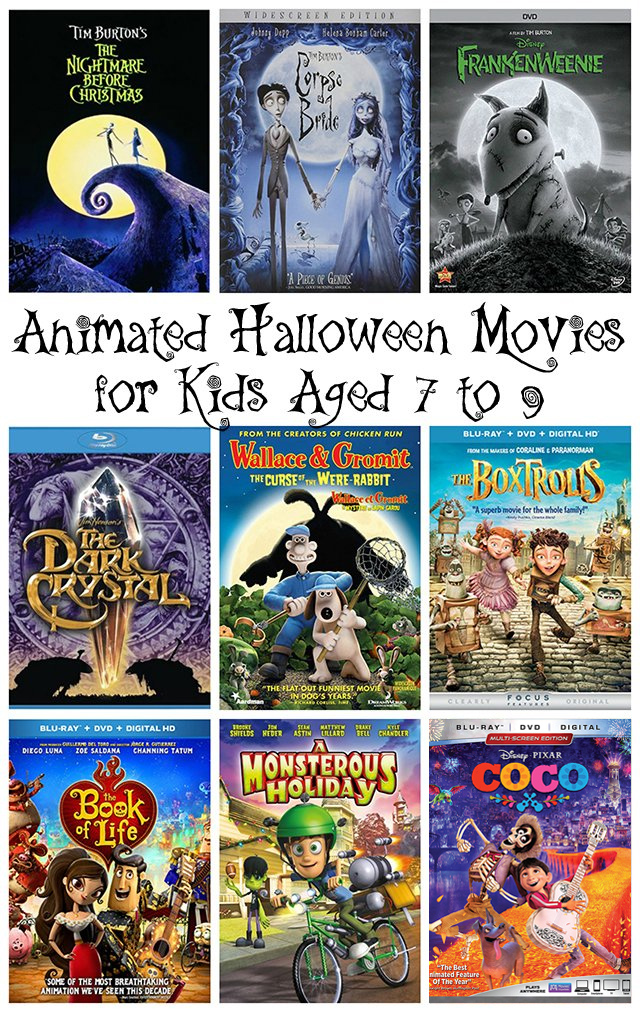 Tim Burton’s The Nightmare Before Christmas (1993)
Bored with the same old scare-and-scream routine, Jack Skellington, the Pumpkin King of Halloween Town, longs to spread the joy of Christmas. But his merry mission puts Santa in jeopardy and creates a nightmare for good little boys and girls everywhere! It’s not really Halloween until we’ve watched this stop-animation classic.
BUY HERE

Tim Burton’s Corpse Bride (2005)
This stop-motion animated feature follows the story of Victor, a young man whisked away to the underworld and wed to a mysterious Corpse Bride, while his real bride Victoria waits bereft in the land of the living.
BUY HERE

Frankenweenie (2012)
After unexpectedly losing his beloved dog Sparky, young Victor harnesses the power of science to bring his best friend back to life – with just a few minor adjustments. He tries to hide his home-sewn creation, but when Sparky gets out, Victor’s fellow students, teachers and the entire town learn that getting a new “leash on life” can be monstrous.
BUY HERE

The Dark Crystal (1982)
When Jen, a member of the Gelfling tribe, sets out to find the crystal’s missing shard and bring balance back to his world, his dangerous journey brings him face to face with monsters at every turn. This is one of my favourite movies of all time. While not specifically Halloween-themed, the dark and spooky atmosphere is perfect for the holiday.
BUY HERE

Wallace & Gromit: The Curse of the Were-Rabbit (2005)
Wallace and his loyal dog, Gromit, set out to discover the mystery behind the garden sabotage that plagues their village and threatens the annual giant vegetable growing contest.
BUY HERE

The Boxtrolls (2014)
Quirky, mischievous and good-hearted, these box-wearing creatures have lovingly raised a human boy named Eggs in a charming cavern below the bustling streets of Cheesebridge. But when evil Archibald Snatcher decides to capture the lovable misfits, it’s up to Eggs and his feisty young friend Winnie to save the Boxtrolls.
BUY HERE

The Book of Life (2014)
Manolo, a young man torn between fulfilling the expectations of his family and following his heart, embarks on an adventure that spans three fantastic worlds where he must face his greatest fears.
BUY HERE

A Monsterous Holiday (2013)
A young inventor named Andy meets Frankenstein’s monster, a teenager just like him. Andy uses Frankenstein’s lab to work on his project for the Science Fair, but when he makes a mistake, they must work together to save the town and Halloween.
BUY HERE

Coco (2017)
Despite his family’s baffling generations-old ban on music, Miguel dreams of becoming an accomplished musician like his idol, Ernesto de la Cruz. Desperate to prove his talent, Miguel finds himself in the stunning and colorful Land of the Dead following a mysterious chain of events. Along the way, he meets charming trickster Hector, and together, they set off on an extraordinary journey to unlock the real story behind Miguel’s family history.
BUY HERE

Despite being animated, these movies are definitely for the older crowd. These give me the creeps so they’re not for the faint of heart. You’ve been warned… 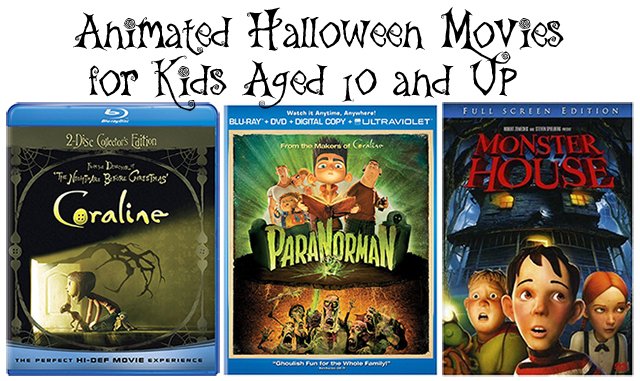 Coraline (2009)
While exploring her new house, Coraline discovers a strangely idealized version of her own world. Soon things take a sinister turn though, and she realizes that everything is not as charming as it seems.
BUY HERE

ParaNorman (2012)
Norman must use his ability to see and speak with the dead to save his town from a centuries-old curse. In addition to spooky zombies, he’ll also have to take on mysterious ghosts, wily witches and, worst, of all, clueless grown-ups. But this young ghoul whisperer will soon find his paranormal abilities pushed to their otherworldly limits.
BUY HERE

Monster House (2006)
When D.J. witnesses toys being swallowed up by the house next door, nobody believes him. But he’s not just imagining things. D.J. and his pals are about to find out just how bad it is!
BUY HERE

Which are your must-see movies for Halloween?