A Tea Party Birthday at The Great Escape in Langley, BC | This West Coast Mommy

As Tee’s fourth birthday loomed closer and closer this year, I began experiencing a curious mix of emotions. Wistfulness as I realized how far she’s getting from the newborn I held in my arms four years ago. Anticipation and excitement at celebrating another milestone with her. And dread of having to organize and host her birthday party. Anybody who’s done the home birthday party thing knows the amount of work involved in cleaning the house for company, decorating, preparing food, hosting and keeping the kids occupied, then cleaning the house all over again afterwards.

This year, we decided to give ourselves a break and let someone else take care of everything. (Though given that we had family over for Tee’s birthday anyway, we didn’t get as much of a break as I had hoped for.) Way, way back, I celebrated my seventh birthday at McDonald’s, and I remember that was one of the highlights of my year. There are so many more options available now than there were back then. I found an indoor theme park and family entertainment centre only a few minutes from my house, and they host birthday parties there! 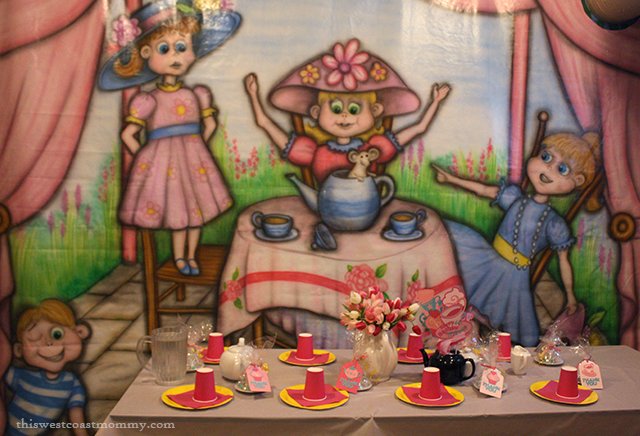 We invited seven friends from the neighbourhood to join us. I arrived a few minutes early to check in and to put up my custom tea party decorations. The room was already set up for us and decorated with two adorable tea party canvas murals, enough pretty dress up tea hats for everyone (including the boys), a balloon bouquet, and a set table. I had requested a pink tablecloth to match our decorations but noticed it was purple when I got there. I pointed out the mistake and the staff fixed it right away before any of the guests even arrived.

I met with our party host, Breanne, who was assigned to coordinate the party and make sure everything went smoothly. This is usually my job at home parties, so I was happy to pass the torch to someone else. Breanne put up the birthday banner I brought, welcomed the kids and parents, served the food and cake, and kept track of the schedule for our two hour time slot. She was very friendly and patient with the indecisive four and five year olds.

When the kids first arrived, we set them loose to play. After an hour, our kids were paged over the PA system to return for (iced) tea and little sandwiches. We received four kinds – tuna, ham and cheese, egg salad, and jam – on a tiered tray. The beverage options included water, iced tea, hot tea, and pop, but for kids this age, we stuck with water and iced tea. 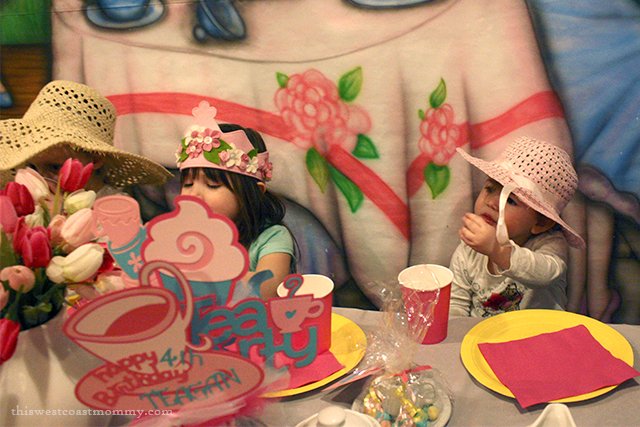 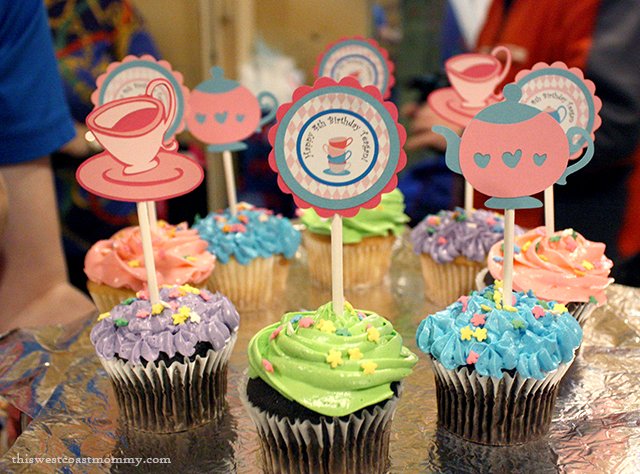 The kids got to play some more, then everybody came together again for cupcakes (one per child) and this fantastic birthday cake from The Cowardly Lemon made to look like a tea party table complete with tablecloth, four tiny teacups on saucers, a teapot, little tea sandwiches, cookies, and cupcakes. (Thank you, Kristy!) 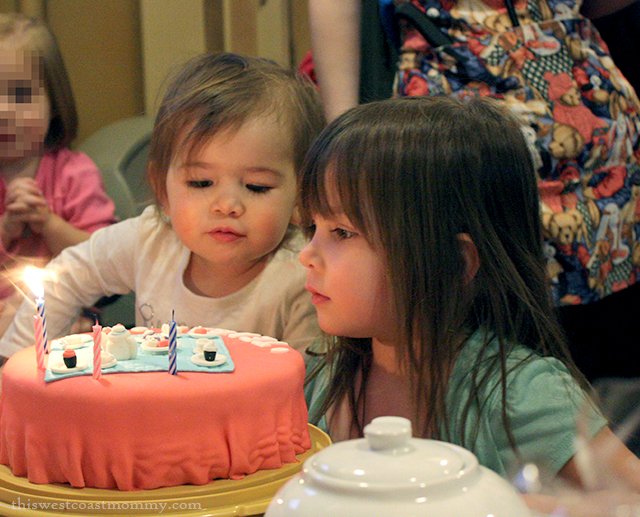 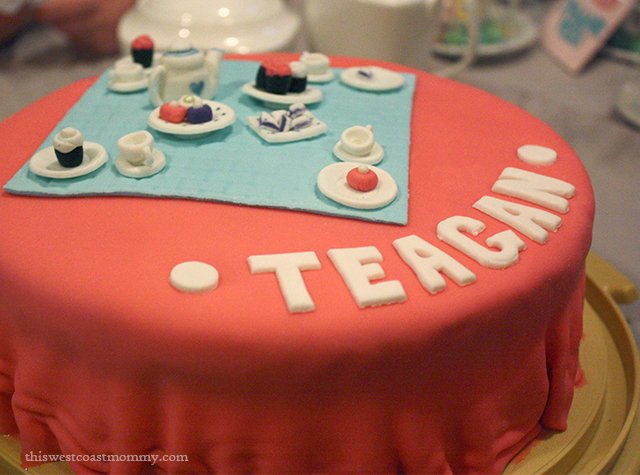 Then we opened presents. The Great Escape party packages all include a small present for the birthday girl so Breanne brought her a purple cinch sac. When Tee complained that she already had a backpack (we’re still working on expressing gratitude), Breanne kindly got her a frisbee instead.

We needed to vacate the party room after our allotted two hours, but any of the families that wanted to could stay and play after the party for as long as they wanted. I can’t tell you how nice it was just to leave and not have to worry about clean up!

Nothing’s perfect, and like any party we had a couple of hiccups. Our party package included an additional tray of small desserts that were forgotten in the back until an hour after the party had ended and everybody else had already gone home. I appreciated that the manager came back a little while later with complimentary 2 for 1 admission passes to hand out to each child who attended the party. Just a couple of minutes before that, Tee lost her helium balloon. I asked a nearby staff person for a new one, and he said he needed to check with the manager. It’s too bad the staff can’t give a crying child a new balloon without asking first, but when the manager saw what had happened she happily replaced it for us (and tied it to a slap bracelet on Tee’s wrist so she wouldn’t lose it again).

All the kids had a great time, and the parents were able to visit while the older kids played independently. There is so much for kids to do here. The Great Escape is by far the biggest family entertainment centre I’ve been in – bigger than the other nearby play places. The play areas themselves are reasonably clean and very inviting. They have a huge 24 foot tall four-level jungle-themed playground with over 50 different play elements. Tee’s favourite features were the Lava Drop Slide and the Water Wave Triple Slide. The Great Escape also has bowling, laser tag, 3D glow in the dark mini golf, a 5D simulator, a ballistics zone (ball cannon), a mini arcade, and a toddler zone. There’s something here for all ages! 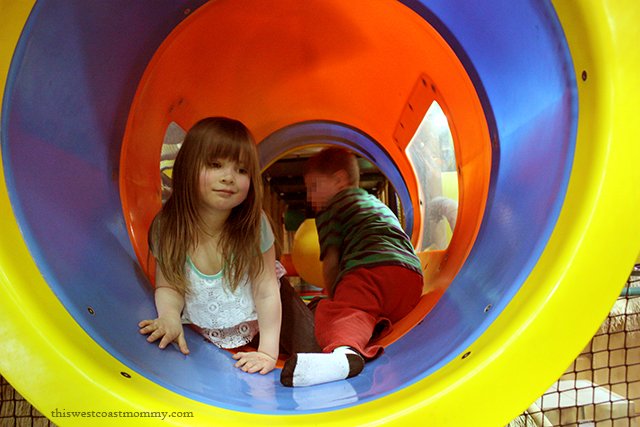 I loved that this was truly a whole party package, from the entertainment, decorations, food and drinks, hosting, and clean up, right down to the take home party favours. The only things I brought were the cake and custom decorations. I would absolutely do this again. It was totally worth not having to host everyone at my house, prepare food for everybody, keep the kids entertained, and clean up after. Instead I got to just enjoy the party!


Book your Great Escape party reservation online or by phone at 604-533-1432. Themed parties like the one I reviewed start at $260 for 8 children including the birthday girl/boy.

Disclosure: I received a party package to facilitate this review. All opinions expressed are completely honest and my own, based on my personal experience. Your experience may differ.