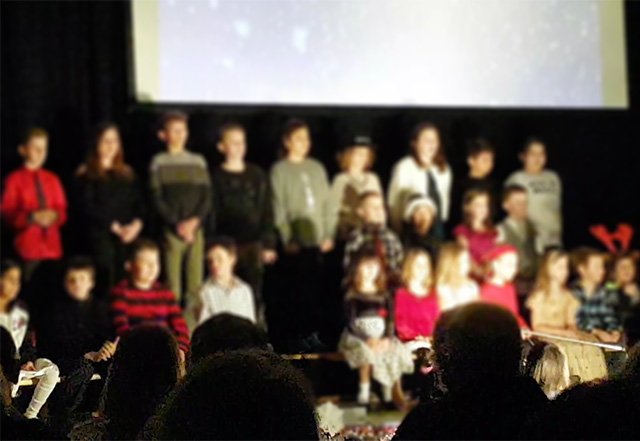 It’s holiday concert season again. All the “Jingle Bells” and “Frosty the Snowman” you can handle (and more)!

My kids and all their classmates have been practicing for their concert for weeks. Like a lot of parents, I’ve listened patiently through dozens of run throughs of the same Christmas carols over and over again the past few days.

Finally, after all the rehearsals, tonight was the night. The girls got out their fancy holiday dresses, and I did their hair. Since it was a special event, Tee got to wear a hint of blush and some lip gloss, and Kay got to wear one of my necklaces. They were both so excited!

Hubby and I were running late but managed to squeak into the gym just before the first class walked onto the stage. It was standing room only so we scooched into the back with the other parents who had arrived too late to snag a folding chair and got ready to stand for the next hour.

First up were the 5-year-olds singing “Little Snowflake.” You know that one, right?

We all clapped appreciatively, but before the applause was even over, I felt a tap on my shoulder. I turned to let the couple behind me get by, then someone else, and then a stream of parents walking past me, down the aisle, and out the door. As the next class was filing on the stage and getting ready to sing “Frosty the Snowman”, they continued leaving from all over the gymnasium. At least 30 parents walked out.

At first I was confused. Did they know something I didn’t? Were they going to pick up their kids and bring them back? As far as I knew, all the kids were being supervised by their teachers until the concert was over. I looked around and saw they were carrying their coats, umbrellas, bags, and purses.

These parents weren’t coming back. They’d come to see their child sing, and now that their child was done, they were leaving.

Seriously? When did this become okay? Maybe I’m being too blunt here, but it was rude and self-centred and disrespectful to all the kids who had worked so hard on their performances.

I understand that some parents really do have a good reason to leave early. Perhaps you or your child has special needs. Maybe the dog is sick and you need to get home right away. Maybe your baby is too fussy to stay any longer. I get it. I know there are lots of possible circumstances why some couldn’t stay an extra 30 minutes to watch and clap for the other kids. (Please remember, we’re not talking about a three-hour commitment here. The entire thing from beginning to end was less than an hour.)

But I doubt all the parents leaving had reasons like that though. Most of them had simply seen what they’d come to see and just didn’t feel like sticking around to watch anyone else’s kids stumble through some more Christmas carols.

Was I really looking forward to yet another version of “Winter Wonderland” where half the kids had forgotten the words, and the other half had forgotten the tune? Probably not. But there’s a social agreement when it comes to school concerts. We sit and listen and clap for your kid, and you’re supposed to do the same for everyone else’s.

As each class finished their song, parents continued to leave, usually walking out during the next class’ performance. By the end of the 50 minute concert, only about half of the audience was left. My 8-year-old daughter’s class went last, and she noticed. She noticed that the gym had been full to bursting at the start and was now half empty. She noticed all the empty seats. She told me she watched people walking out while she was on stage, and it hurt her feelings.

Later on, as we cuddled before bed, she whispered to me that she’d felt like crying, but wasn’t I proud that she’d tried really hard to stay focused on her song instead? It broke my heart.

To those parents and grandparents who stayed all the way to the end, thank you.

To those who didn’t stay, next time I hope you’ll do things differently. It’s not even an hour. Is it really too much to give up 45 minutes once a year so the other children don’t feel snubbed like that? Wouldn’t you want us to do the same for your child?

And if you really do have to leave early, then for the love of Pete stand near the exit door so you can go quietly and unobtrusively. Don’t sit in the middle of the row and make everyone stand up to let you through while the next group of kids is trying to sing their song as they watch you walk out.

Next year, it could be your kid who’s last to go on the stage. Even if my kids are finished, I promise to stay and clap for yours, and I hope all the other parents do too.