Tee turned four on Sunday, and seemingly overnight she’s become such a big girl! Last year I shared Kay’s home birth story in honour of her first birthday, so I thought it would be appropriate to share Tee’s birth story in celebration of her fourth. You know how some women have accidental home births? Well, this is the story of my accidental hospital birth. 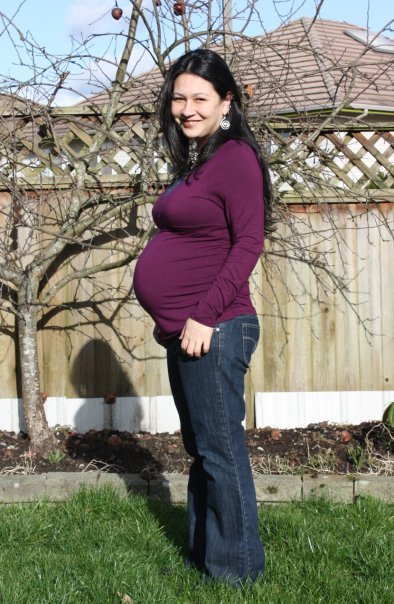 Four years ago, I was anxiously waiting to become a mother for the first time. On March 1, 2010, I was 37 weeks and 4 days pregnant. Even though 37 weeks is considered full-term, as a first time mom I was absolutely expecting to go past my due date and to have a L-O-O-O-N-G labour.

So I was a bit surprised when around 10 p.m. that evening, I started noticing some cramps that felt different from the Braxton-Hicks I’d been used to for the last couple of months. Around midnight I lost my mucous plug and the cramps began coming regularly every 10-15 minutes or so. We decided to try to get some sleep while we could, but around 6 a.m. my contractions woke me up. I didn’t want to be that mom that called the midwife hours before anything actually happened, so I laid quietly in bed until I noticed my contractions starting to get stronger and closer together.

We waited until 8:00 a.m., then my hubby Chris phoned the midwife to let her know what was happening. Anne told us she was already at the hospital with another woman in labour and suggested that I stop by for an early labour assessment. At that point she’d be able to determine if I could wait until she was done with her current client or if we would need to call another midwife to attend my home birth.

I had planned a peaceful drug-free and natural water birth at home with soft lighting and music. I had written out this beautiful birth plan that covered all the details (or so I thought), including having Chris catch the baby. I didn’t actually want to go to the hospital, but I wanted to see my regular midwife and not her back-up, so I agreed to the plan.

Anne suggested I have something to eat and leisurely make my way to the hospital before lunch time. By that time, the contractions were about 5 minutes apart and getting stronger. I laid down on the bed for a while. The contractions began coming even stronger, and I started to feel sick to my stomach. I told Chris I couldn’t eat and we should just go now. It took about 20 minutes to get organized and get in the car. By the time we were halfway to the hospital my contractions were coming three minutes apart, and I was no longer able to talk during them. Between contractions I told Chris we wouldn’t be coming home without the baby. The idea of getting back into the car and going home again to meet the midwife was not something I was willing to consider. I still thought I was in early labour. 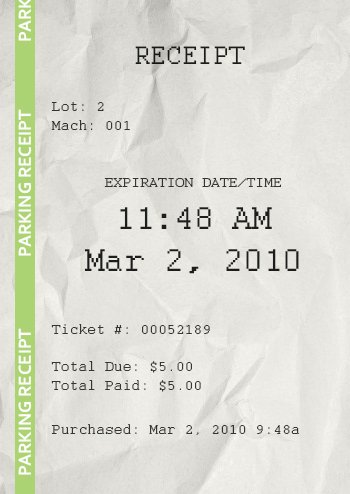 Chris dropped me off at the hospital entrance. He went to park the car and bought a parking ticket at 9:48 a.m. I sat in the main floor lounge waiting for him and just tried to breathe. When Chris came back we got in the elevator and went up to the maternity ward. A contraction hit me as I was getting in, and I doubled over. A stranger in the elevator reached out and patted my stomach. She said, “Don’t worry, it’s worth it.” If I could have straightened up, I would have smacked her. What on earth makes some people think that a pregnant woman’s belly is common property? The last thing I wanted was some stranger invading my personal space in the middle of all this pain. Back off!

After what felt like the longest elevator ride ever, we got to the maternity ward and the nurse sent us to the waiting room. I could barely lower myself into the chair, and I just kept thinking, “Oh my god I know they’re going to tell me I’m only 2 centimeters dilated and I’ve got hours to go and I don’t think I can handle it oh my god if this is early labour how will it feel when I’m really in labour I don’t think I can do this anymore…”

The midwife and her student met us right away and brought me into an assessment room. Anne talked with me for a couple of minutes then went to check on the progress of her other client. As soon as she left, a really strong twisting contraction hit and I bent right over hanging on to the exam table for all I was worth. At that moment I gave up and told the student midwife, “I can’t do this. I need drugs.” Rachel responded that they could get me something, but first I needed to get onto the exam table so she could see how dilated I was. Hubby helped me undress and get up on the table. Rachel took a quick look and calmly said, “You’re fully dilated, and I can see the head. I’m going to get Anne. Don’t push.” I was in transition! No wonder I was having such a hard time.

Rachel sounded so calm and reassuring. Except that when she left the room, I could hear her running down the hallway to the other room calling, “Anne!” Hubby reminded me to blow short sharp breaths (feather breathing). I was so relieved when Anne came in. I was feeling pretty panicky, and she was so calm.

And then I felt an incredibly intense, painful contraction twist my insides. I know they call it the urge to push, but it wasn’t an urge at all. It felt completely involuntary, like a sneeze. I remember seeing my stomach rippling with the contraction. Anne asked me if I could walk to the labour room, and I just shook my head. Was she crazy?

Anne organized Chris and her student to stand on each side to steady me on the two and a half foot wide gurney so I didn’t fall off. She told me that the sac of waters was bulging out and asked if she could break it to help the baby come. I couldn’t talk so Chris told her to go ahead. She broke the sac, and I felt a gush of water and the head descend. Anne helped support my perineum and told me to stop pushing in order to slow things down. I tried, but the pushing happened whether I wanted to or not.

With the next push, the head crowned and Anne urged me to put my hand down to touch the baby. Everything felt so intense that I had my eyes shut just trying to manage. I remember Anne telling me twice to open my eyes to see what was happening, but I didn’t want to. She told Chris now was the time to move down to catch the baby, but he looked at me and said he would stay with me. He told me later that he could see how frightened and panicky I was, and he knew I needed him more. That was exactly the right decision.

One more push and holy smokes they’re not kidding when they call it the ring of fire! Once that head came out, the relief was indescribable. Anne smoothly slid the looped cord over the baby’s head. One more contraction and her body slipped out. Anne scooped her up and immediately put my brand new little girl on my chest. Tee looked up at me and then peed on me. Time of birth was 10:18, 30 minutes after Chris had parked the car. If we had taken just a little longer to get going to the hospital, hubby would have been delivering this baby on the side of the road! 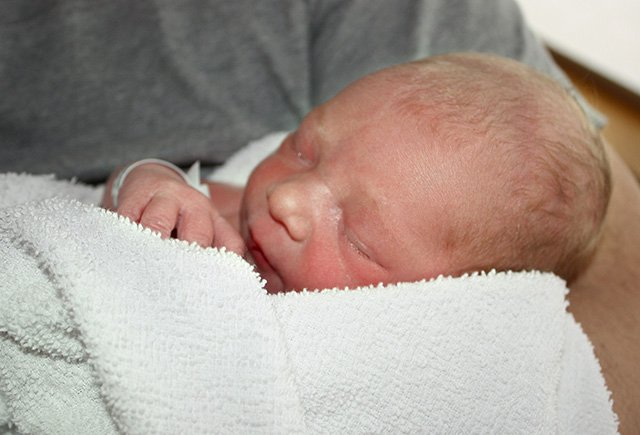 I held my baby in my arms, and Chris cut the cord once it stopped pulsing. Anne delivered the placenta, then she and a nurse wheeled me into a delivery room and transferred me into a proper bed. I held Tee and just marvelled at this tiny little being. She was only 19″ long and 6 pounds, 6 ounces. The student midwife Rachel helped me latch my baby on for the first time. Tee caught on pretty quickly and had her first meal right away. Before getting pregnant I had worried that breastfeeding might feel weird, but it just felt right to hold her close and nurse her. I had nourished her inside my body for the last nine months; it was only natural to keep going!

I really wanted to go home right away, but we had to wait as the midwives were busy with the first woman. We were finally able to get all the paperwork and measurements done and go home six hours later. The first woman was still in labour when we left with our new baby. 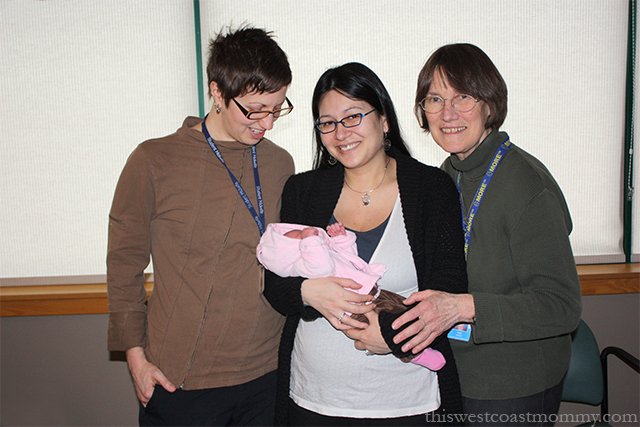 The drive home was filled with a stunned, exhausted silence. Neither of us had expected that we would be going home as a new family so soon. As soon as we got home I was so grateful to just get into bed and cuddle together, gazing at this small being that had made us a family forever. 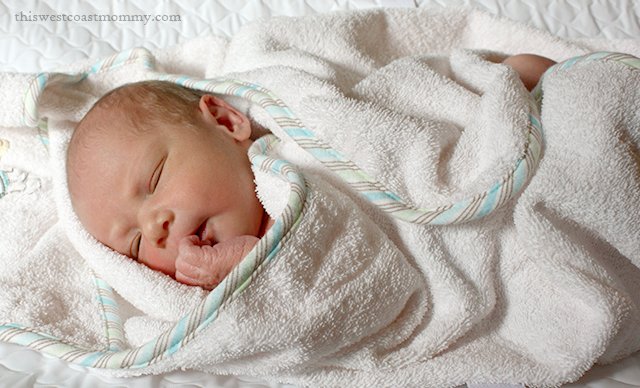