This past long weekend, I was sitting in the living room with the baby when I heard an incredibly loud BANG from the kitchen. It was so loud my ears were ringing. For one split second I wondered if someone had shot at my house! I looked over in the kitchen but couldn’t see anything. There was no smoke, no fire, and nothing seemed out of place, but I didn’t really want to investigate with the baby in my arms. Kay was crying so I took her upstairs and sent in the hubs to investigate. Chris gingerly moved everything off the kitchen counter and found this: 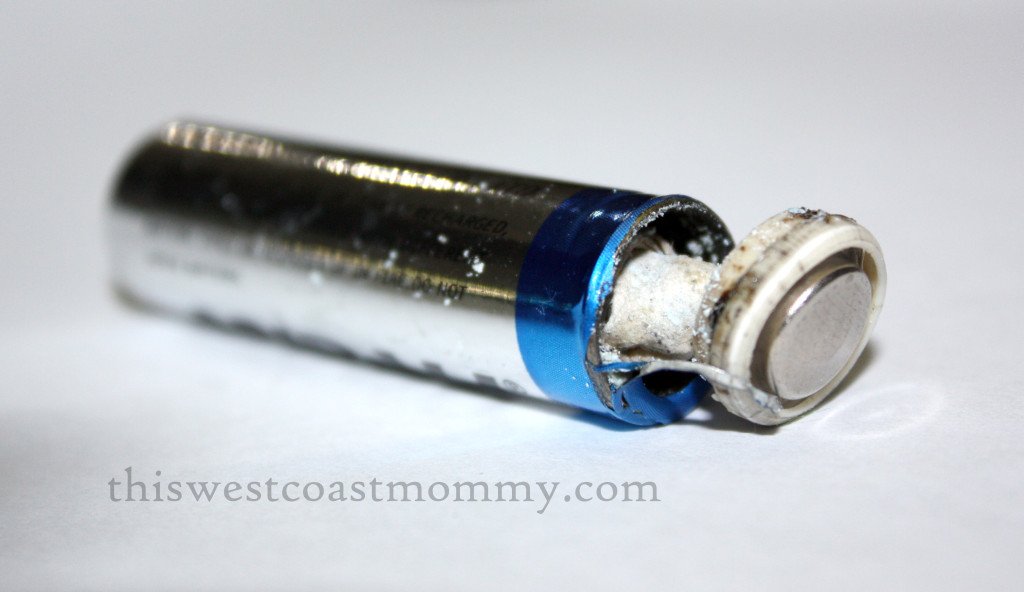 Upon closer inspection, I saw this warning in fine print on the side of the battery.

Caution: May explode or leak if recharged, inserted improperly, mixed with different battery types or disposed of in fire. Do not open battery.

Fair enough, but I hadn’t done any of those things! So naturally I started googling “exploding battery” and discovered that it’s not that unusual for batteries to explode. The most common scenario is when someone uses the wrong type of charger or tries to recharge a battery that isn’t rechargeable. Inserting a battery the wrong way can do it too, so pay attention to the little + and – diagram in your battery compartment. Removing the insulation (the plastic covering), submerging it in water, or exposing it to extreme heat can cause a battery to rupture as well.

I also learned this is why the instructions always tell you to replace all of the batteries in your device at once instead of one at a time. I had always figured it was a conspiracy between electronics manufacturers and the battery companies, but apparently if one of your batteries is low on juice but the others are full, they will attempt to “recharge” the dead one which will reduce the lifespan of the new batteries and could even cause the dead battery to overheat and explode.

And if you’re in the habit of carrying loose batteries and small metal objects in your pocket, STOP! They can rupture or leak if the metal on metal creates a short.

Of course, all this useful info doesn’t apply in my case. My battery wasn’t discoing with the dimes in my pocket. It wasn’t inserted backwards. It wasn’t even in any device. It was just lying there, peaceful and quiet on my kitchen counter, until it spontaneously exploded and scared the hell out of me!

So has this ever happened to you? Did you know your batteries could explode?