Up Close and Personal with Toopy and Binoo: Fun and Games | This West Coast Mommy

Last weekend, I got to take my girls out to see their favourite mouse and cat friends in their newest live theatre production, Toopy and Binoo: Fun and Games. We were especially excited because we were also invited to the VIP (Very Important Preschooler?) pre-show party. We arrived about 45 minutes before the show and joined some other lucky children in the party area. Every child received a Toopy and Binoo drawstring book bag containing a jumbo sized Toopy and Binoo activity book and Fun and Games poster.

But the highlight of the whole day was their personal meeting with Toopy and Binoo. We were able to take lots of pictures, with the girls and then with the whole family. The actors were wonderfully patient with the shy kids, and we never felt rushed. Both my girls were excited, but Keira in particular was absolutely enchanted by the experience. 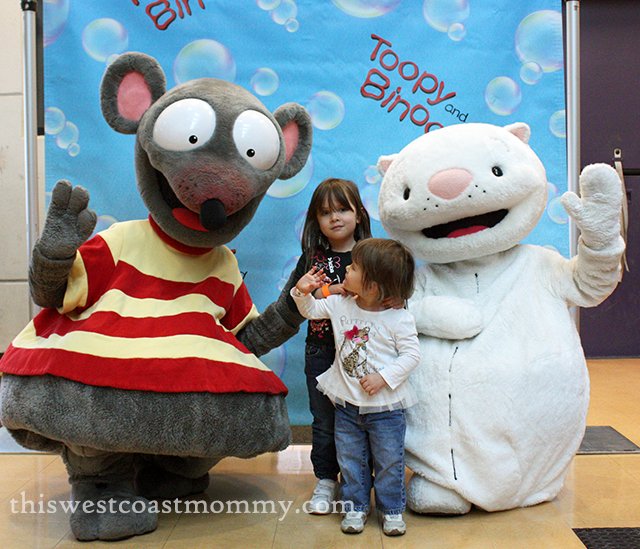 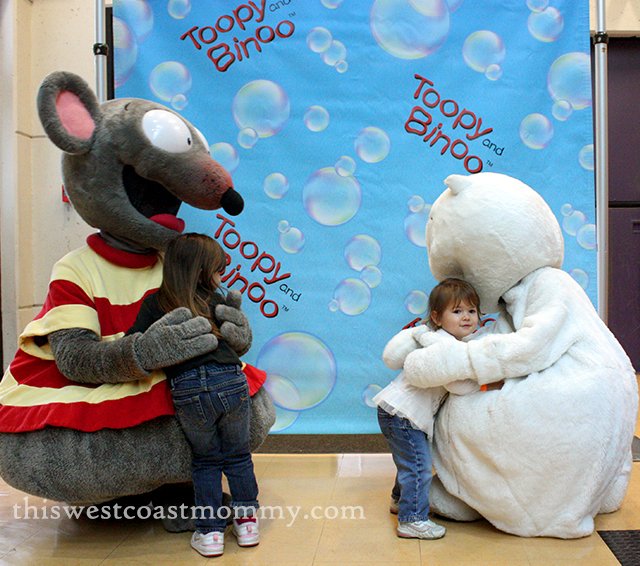 Even hubs and I got into the fun! Thank you for making my kids so happy! 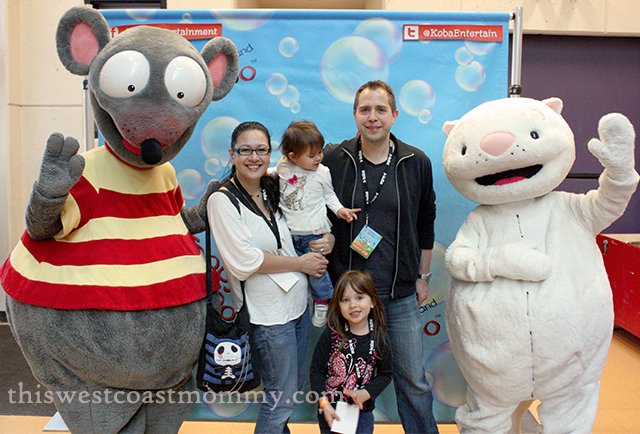 After the VIP experience, we found our seats in the Bell Performing Arts Theatre. We were up in the balcony but still had a good view of everything on stage. The stage was a straightforward set up with one large screen on the back wall and three TV screens on either side of the stage. Props were simple and in the style of the Toopy and Binoo cartoon. 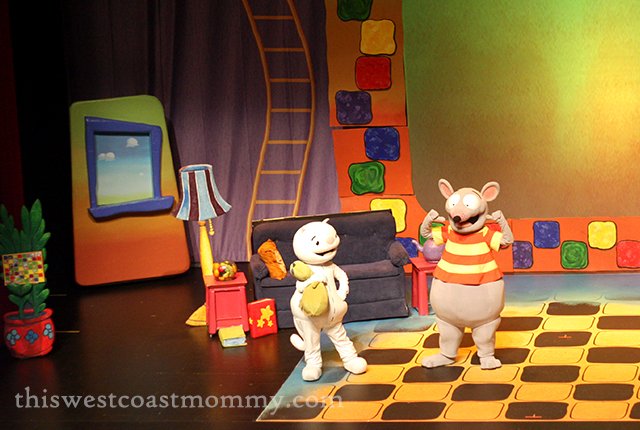 There was a bit of an issue with audio in the first few minutes, but the techs got it fixed quickly and everything was smooth sailing after that. The girls were up clapping and dancing from the first appearance of Toopy and Binoo on stage, and I don’t think they sat down through the rest of the show.

Toopy and Binoo try game after game, looking for the best game ever. They play hide and seek, charades with the Dustaroos, I Spy, Tic Tac Toe, and even a game show called What’s That Sound. Along the way, the friends keep running into a hint-dropping snake, but they’re unable to keep up with him to find out what he knows. 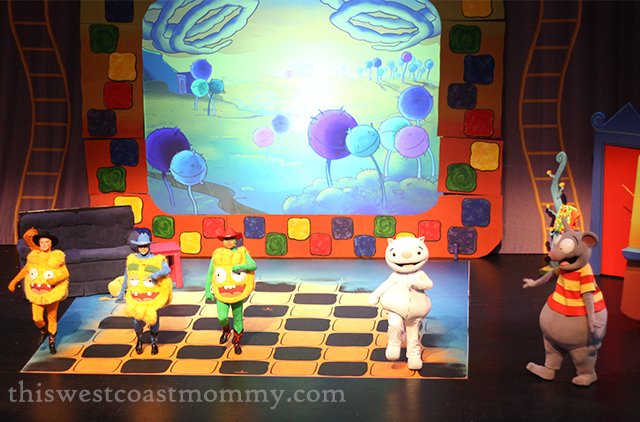 After the 15 minute intermission, Toopy and Binoo go on a little detour to visit Mr. Lips under the sea in hopes of curing Binoo’s hiccups. (“What do you get when you cross a fish with an elephant? Swimming trunks!”) 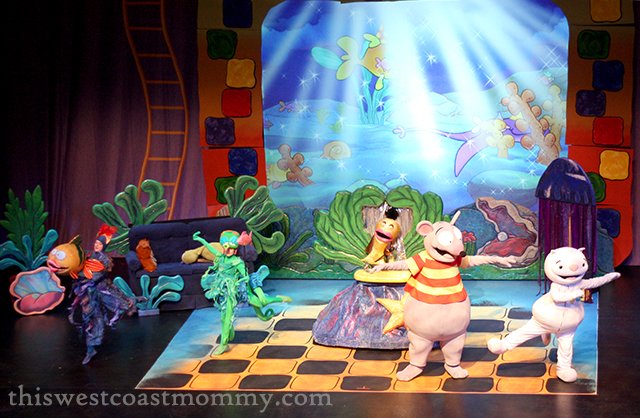 Back on dry land again, Toopy and Binoo run into some cats on a picnic and play rhyming riddles with them, then watch a vegetable race. The friends meet two sheep and play jump the gate, trade baaaa-d puns, and do the limbo.

At this point, there was a bit of an odd interlude with two monsters dancing to techno music while set changes were made behind them. This was the least successful part for me as it didn’t seem to fit the rest of the show.

Toopy finally catches up with the snake and discovers that the best game ever is Snakes and Ladders. While that may not be my choice for the best game ever, the song and dance finale of the show was definitely catchy and lots of fun! I had the song stuck in my head all day!

“You go up the wooden ladder, down the winding snake…
But first you need to give the little dice a shake.” 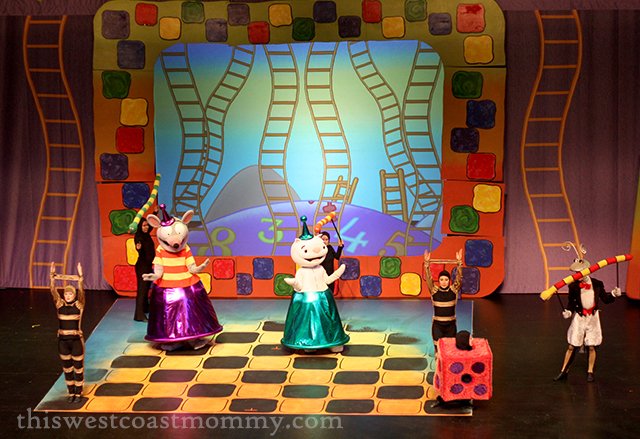 I loved how interactive the show was. Toopy and Binoo involved the audience members at multiple points throughout the show. Lots of singing and dancing kept my kids entranced, and appearances by other familiar characters from the TV show (the Dusteroos, Mr. Lips, the picnicking cats, the sheep, and monster friends) kept the production feeling comfortable and true to the feel of the TV show.

When the curtain went down, Keira kept waving and calling, “Bye, Toopy! Bye, Binoo!” We all had a great time, and the girls couldn’t stop talking about the show for days after. Even if your children aren’t familiar with Toopy and Binoo, they will thoroughly enjoy the show. And if you do have little fans at home, they’ll have the time of their lives!

Toopy and Binoo: Fun and Games is currently playing across Canada through to December 21, 2014. Follow Koba Entertainment on Facebook to get the latest information about Fun and Games and other children’s theatricals. Visit Toopy and Binoo on Tour for more tour info and to get your tickets before they sell out!

Disclosure: I received media tickets for the purpose of writing this review. All opinions expressed are completely honest and my own, based on my personal experience. Your experience may differ.