Editor’s note: We believe that all birth stories and all birth experiences matter. This post is part of an ongoing series of birth stories submitted by readers and fellow bloggers, featuring a diverse range of women and their birth experiences. Today’s story comes from Louise, a maternity nurse and mother of two, who describes the delivery of her first baby as “wonderful, short, and uneventful.” She encourages women to view birth as doable and nothing to fear. If you would like to share your own birth story, please visit this post to learn how. ~Olivia

As a nurse working in Maternity, I had seen it all! I had my ideas of how I was going to labour, how long I was going to breastfeed and what sort of mother I was going to be. These are obviously hilarious now that I look back on it as none of it went the way I was planning!

While my pregnancy consisted of perfect blood pressure, text book weight gain, and asymptomatic gestation, I regretted saying I would work until 38 weeks. At this rate I could just come in to work, casually stroll over to Labour and Delivery and have the perfect drug-free labour. Instead I finished working on Good Friday and my husband and I went out on a mini babymoon a couple of towns over. 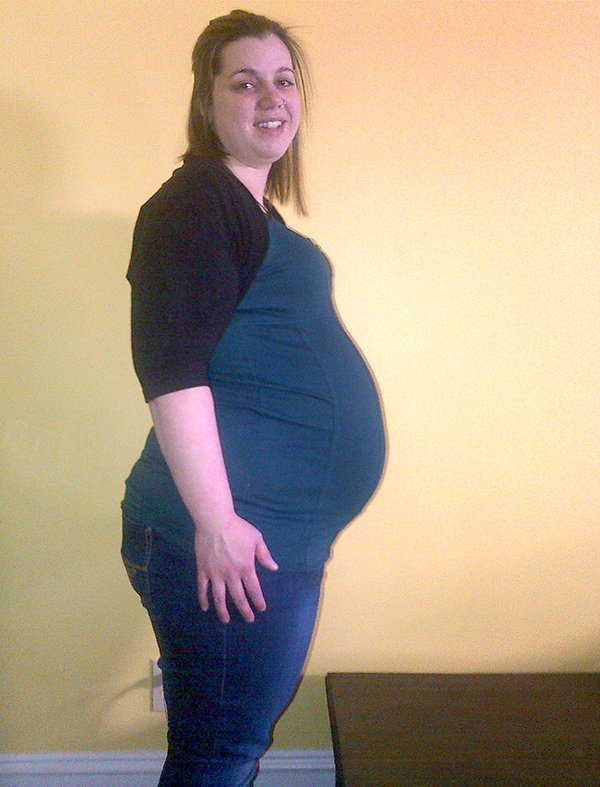 After indulging in WAY too much ham for Easter supper I went to bed thinking about the lazy few weeks I was about to have: catch up on Netflix, do a rigorous cleaning on the house, get the dogs groomed, etc., when a strange feeling in my pelvis indicated that my water broke!! My doctor had assured me that the water generally only broke while in labour and while the ‘Hollywood Gush’ was rather rare, here I was running to the bathroom leaving a trail behind me. My husband, panicked, had no idea what had gotten into me and followed me into the bathroom.

After debating for a few minutes about whether or not to go to the hospital, I went downstairs to look at the note my doctor had given us two weeks ago listing the signs that meant I had to go to the hospital. Sure enough, ‘water breaking’ was one of the reasons to go.

Although we lived a block from the hospital, we thought it prudent to drive there as it was 10:45 pm. Once at the hospital, jeans soaked (certain period pads make really poor amniotic fluid soakers), my coworkers helped me don a johnny shirt and asked me several times whether I was sure my water broke or not. Before my nurse could even ask me to cough, I had another gush which took away all doubts that my water had broken.

Unfortunately, I was not having any contractions. I was asked whether I wanted to start on a pitocin drip then or wait till the morning to see if I would start contracting on my own. I chose to wait. We were sent home to ‘get some sleep’, and asked to return the next morning at 7. My husband and I were both excited about the prospect of meeting our new one the next morning.

Getting some sleep was a lot easier said than done. Naturally my husband fell asleep right away, but just like the first day of school, I could not fall asleep for the life of me. Thinking about what my new baby was going to look like, fantasizing about motherhood etc. After tossing and turning in bed for 4 hours I decided to get up and get a snack, then headed to the couch to try to get some rest. I got little sleep there too. When 6 am finally rolled around, I took a quick shower. I didn’t seem to be gushing as much anymore, I was exhausted, and my contractions hadn’t started.

It was off to the hospital we went at 7. I got to chose my labour nurse and she came in to start my pitocin drip by about 7:45. My doctor came to see me at 8:30, thankfully she was the doctor on call. She checked my cervix, and I was 1 cm dilated. We chatted a bit and she was off to do her rounds. I was put on the monitor for a half hour then set free to roam the halls with half hour fetal heart checks and pitocin increases. We roamed the hospital corridors with several of my coworkers shocked that I was in labour as they had JUST seen me working 3 days before. 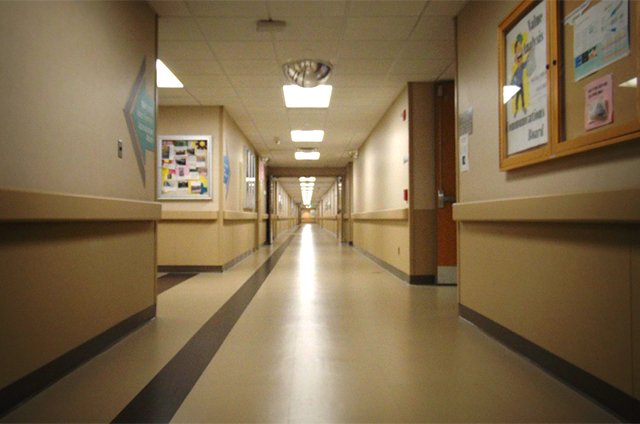 Around noon, nothing much was happening, I was still not feeling the contractions so I decided to try to get some sleep, but there was too much anticipation and excitement so I didn’t get any sleep. At 2, my contractions started to pick up. I was uncomfortable so I got checked I was only 3-4cms. I was incredibly disappointed. It was ridiculously hot there, but I was brought a fan and the windows were opened. I was offered some fentanyl and entenox and I took both. At this point my view of the afternoon are very hazy. My eyes were heavy, and I kept picturing waves ebbing and flowing as my contractions came and went. A nurse finally suggested I tried going to the bathroom around 6:30 and it was then that the urge to push hit me.

I climbed into bed, my doctor was called, my cervix was checked. I was fully effaced but a little lip remained. I was told to push a little to see if it would help and sure enough it did. At 6 I was given the okay to start pushing. Suddenly, my head was clear, the drugs and haze of the afternoon were gone. I found it extremely awkward to follow directions. I was very unsure of what I was doing and some very earthy animalistic sounds were coming out of me. The head started to crown, I was asked if I wanted to feel the head and I quickly refused. All I knew and wanted was to push. The burning feeling is the most prominent pain memory I have kept of the whole experience as the head was crowning. I don’t remember any of the other pain. Of course this is the only pain I had sober.

At 6:14pm, my doctor asked me to stop pushing. She could see that the umbilical cord was wrapped around the baby’s neck twice, but an uncontrollable contraction made sure I didn’t stop and my baby was born. No sound came out of her, but her eyes were wide opened, my doctor freed her quickly and my husband was offered to cut the cord. My baby was placed on my chest very ‘stunned’ but very alert. A few minutes later the placenta was delivered… piece of cake. My doc did a few repairs and I was free to hold my baby once again. Breastfeeding was a breeze at first too, then my husband held her for the first time while I called my mom to let her know she was born. Mom was very excited and offered to call everyone to let them know Zoe was born – good luck with that on April 1st! 🙂 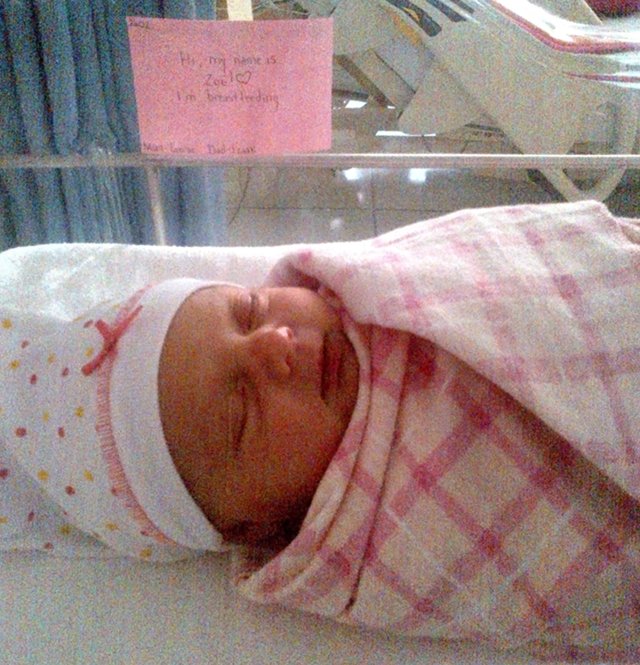 On the bassinet: “Hi, my name is Zoe! I’m breastfeeding.”