On April 17th, Marc and I went out for dinner on what we jokingly called our last hurrah. Leo wasn’t due for another 11 days, so we naively thought we had time. By they way I’m not setting you up for a wild “…and then my water broke in the restaurant” scenario. It was actually just a nice evening out, plus an excuse to post a fancy pic of us before the inevitable barrage of sleep deprived mom photos. 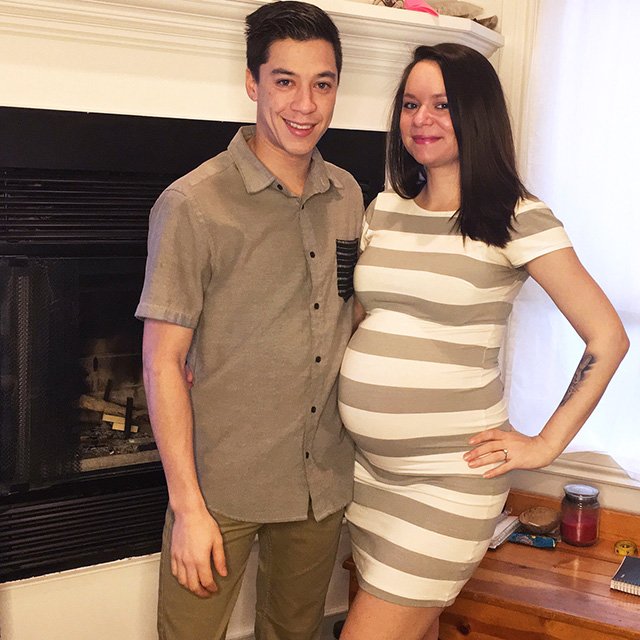 Anyway, I woke up at 10 am on April 19th to pee, which as you know we pregnant woman do 6540 times a night. When I started going back upstairs, I realized I was leaking down my leg! My first thought, “Oh great. I’m already a pee-leaking mom…” I hurried back to the bathroom and something just seemed off. I yelled up to Marc, “Um babe, I think I’m leaking!” Marc raced downstairs asking, “What? What do you mean? From where?”

I called Labour and Delivery and they told me to come in, so I did what any rational woman would do in that situation. I went back to bed. To be fair I wasn’t having contractions and was pretty sure I had lots of time! I told my best friend that I would probably go to L&D alone because it was most likely nothing. Having had a baby only five weeks before, she calmly told me that this was not an option. To be fair, I really did think it was a false alarm!

When I showed up to L&D around 1 pm the nurse at the desk looked at me sternly and said, “We thought you weren’t coming. What took you so long?!” I actually thought they would be glad I didn’t rush in for no reason. This was not the case, at least two other nurses scolded me for waiting too long. It was actually a pretty awful way to start the experience, especially because in the end they simply tested the fluid, confirmed my water broke, checked that I was only 1 cm dilated and had me wait in Triage for three hours until a room opened up. My contractions started around 2:45 pm and were pretty chill. I actually wasn’t sure they had started yet, but the nurse hooked me up to a monitor and showed me that yep, he’s on his way! 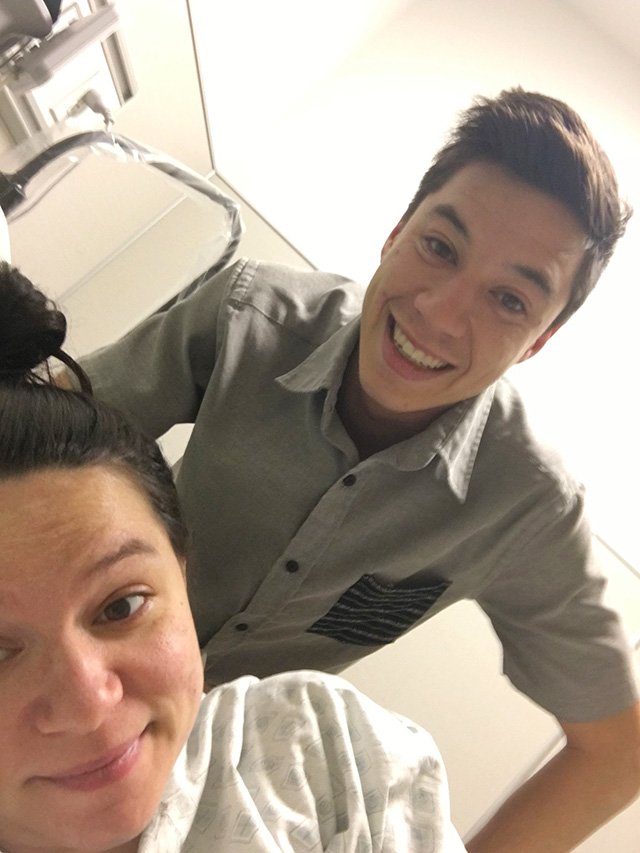 Getting to my delivery room was surreal. Marc and I set everything up and settled in for what was sure to be a long day. My doctor came in to say hi and do a quick check. She told me that she was going to have dinner and would come back around 9 pm because nothing much would happen before that. She said the main thing she wanted me to remember is that if at any point I felt like I needed to poop, I should ask for the nurse immediately. For some reason I didn’t ask why and just nodded. Poor Marc did the same.

The next few hours unfolded how I expected. Contractions were getting progressively stronger and closer together, but I felt like I was still a long way off. At one point the nurse asked how I was doing, I told her I was fine and that the contractions must not be that strong yet. When she looked at me and said, “Actually they’re quite strong. You’re just dealing well,” I felt like a warrior woman! Damn right I’m dealing well. Do you know who you’re talking to? The master birther that’s who!

Unfortunately this Wonder Woman facade faded quickly. Around 7 pm I started feeling like I couldn’t sit down or get comfortable in any way except for bouncing on the ball. And then it came… the nausea. I vomited on the floor. At this point I started considering an epidural. Initially I had hoped to avoid one, but I was realistic in the fact that I had no idea what to expect. I kept asking Marc, “Should I get it? I don’t want it too early. For the love of god make this freaking decision for me!” He of course was not down with seeing me in pain so thought I should get it, and eventually I asked. Did I mention that L&D was unusually busy that day? So we waited… and waited.

I was in pain and had no idea what I wanted. Marc just took the lead. He rubbed my back and my head, and when I wanted to stand he held me up and swayed with me which is still my second favourite moment of that day. Dance through the pain!

By 9 pm, my doctor showed up and said, “Now that’s the face I was looking for.” She checked and said I was only 5 cm but she could feel his hair and he was right there. She also said I was very effaced and she could probably get me to 6 cm with some work. TMI? Too bad, you’re reading a birth story!

Immediately after this convo, I had to poop. My doctor told me that was fine, but she was coming with me. All 3 of us all went into the washroom, and I started going what I thought was number 2, but now that I think back was actually pushing the baby out… I looked at her and said, “I’m sorry but I’m gonna puke again,” turned to the side, and puked in the corner. To this day she still says she is impressed I didn’t puke ON her. I have a memory of being on the toilet with steady contractions and hearing the anesthesiologist saunter into the main room and say, “She’s too far along, eh?” I don’t remember hearing the answer, but I do know that he left right away.

We came back into the main room, and I sat on the peanut ball. I cried a little tiny bit because I knew I would be doing this without meds. Even though I had wanted that, I was scared. Luckily though, things were happening so fast that I didn’t have time to dwell. At 9:30 pm, half an hour after my doctor showed up, I was ready to push! Looking back that seems crazy! 5 cm to 10 cm in half an hour. Ooof! No wonder there was no time to think!

So there I was, in the homestretch, and I started pushing. My doc had one leg, Marc had the other, and it started. I remember thinking the same thing at every contraction: if I just push my hardest and longest THIS might be the last push. So I grabbed hold of the top of the bed and gave about 4-5 mighty pushes before his head was out. I remember being worried that I was too loud, but some force just took over.

As cliched as it sounds I felt like a warrior woman, I swear to god. Marc told me that he was very impressed and that I could have probably birthed Leo in an alley or cave somewhere. I think he meant that as a compliment? My doctor really let me take the lead, and I think that really helped. At one point I looked at my doc and said, “Oh god I’m gonna scare the other women,” and laughed. The team just looked at me like I was crazy for laughing in the middle of active labour.

At this point I remember they kept telling me that they could see his hair. The heartburn was not for nothing after all! After the head, the little guy just seemed to pop out, and they immediately put him on me. I was oblivious to anything else that was happening and just stared at him! I do remember Marc cutting the umbilical cord, and in true Marc fashion he was hilariously awkward about it. He told me after how it was much harder (and more slippery) than he expected! 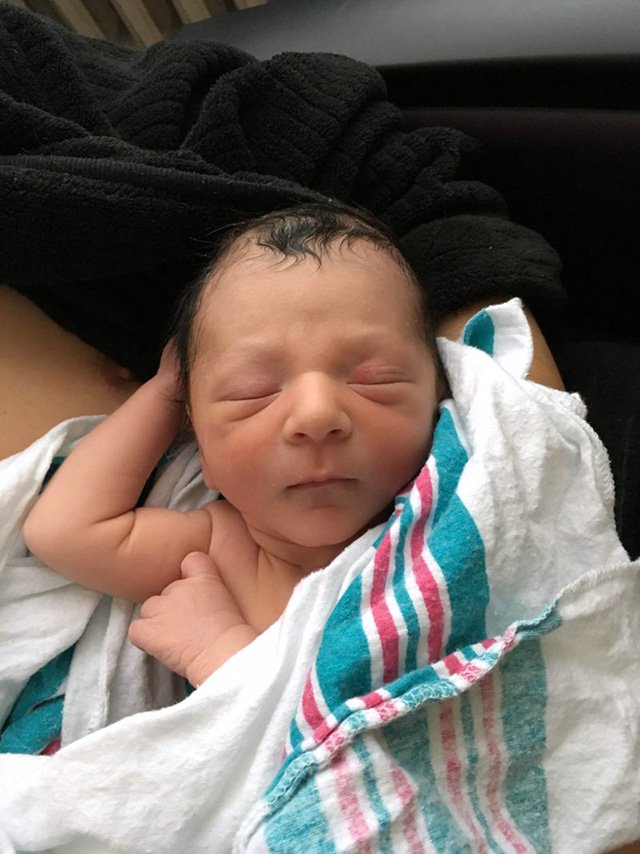 I thought I would cry more than I did. I mean, through the months leading up to it I cried just thinking about meeting him, but I was surprisingly zen. Leo was too, a little too much I guess because I remember the doc took him for a minute to make sure he COULD cry loud. Once she heard it, she gave him back and he quieted down again. Just a calm dude from the beginning I guess!

Leo latched right away, and Marc and I spent the next hour just staring at him. Side note: how cool is it that a newborn just knows how to find your boob and what to do with it? Little man was just like, “Alright Mom, that was hard work. Let’s get some nutrition going”. To this day he’s pretty demanding with the nursing. I have a slight boob monster on my hands.

Although Leo came early it was obvious he was more than ready to make his appearance. Check that alert face just minutes after being born! 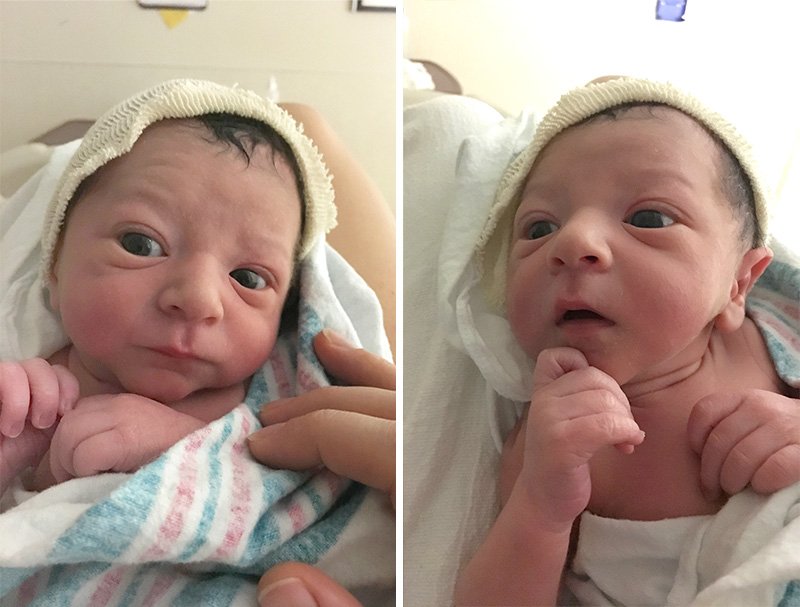 All in all, it was a very normal delivery. Leo was healthy, albeit a bit small at 5lbs 5oz. He was considered low birth weight so they checked his glucose levels a few times and I made sure to nurse him through the night. I have so many pictures on my phone from about 4am when it was just him and me awake. Poor Marc was passed out in the chair, but I think the little man and I were still flying high on endorphins! 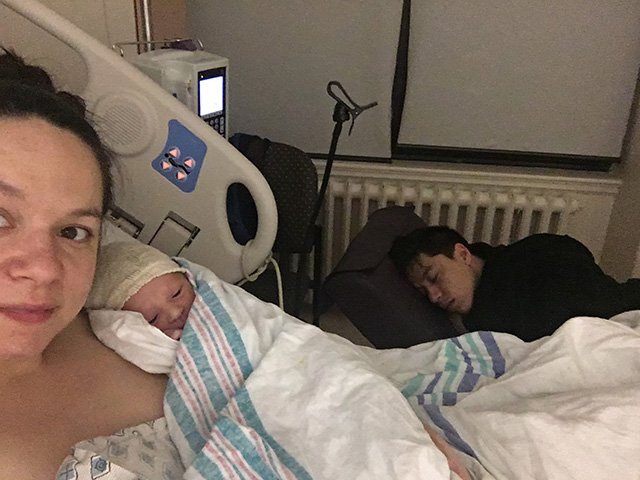 The next day we took him home with no idea what to expect. I just knew that this tiny human was my new BFF and things were about to get real. I just love him. Like a lot. *swoon*

Jessica is a first time mom living in Montreal, QC. She is a self described city girl with crunchy roots. In other words, an urban mama who loves the city life, all things hip hop, cloth diapering, breastfeeding, and baby wearing. It’s all about balance right? Jessica is a blogger and content creator at  Momtreal where she blogs about her life with the boys (boy mom level 100) and keeps you up to date on local baby-friendly events. Be sure to connect with her on Instagram at momtreal.514!