This past Wednesday, hubs and I had the opportunity to attend Cirque du Soleil’s TOTEM under the Grand Chapiteau in Vancouver. We arranged for a babysitter and had our second date night in a week. I can’t tell you how spoiled I felt! 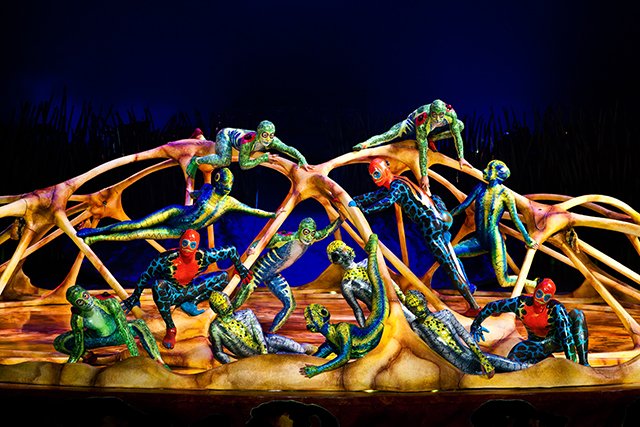 TOTEM traces the fascinating journey of the human species from its original amphibian state to its ultimate desire to fly. The characters evolve on a stage evoking a giant turtle, the symbol of origin for many ancient civilizations.

Inspired by many founding myths, TOTEM illustrates, through a visual and acrobatic language, the evolutionary progress of species.

Somewhere between science and legend TOTEM explores the ties that bind Man to other species, his dreams and his infinite potential.

Right from the beginning I was fascinated by how the relatively small stage was able to do so much. Computer projections of real world photographs taken around the globe transformed the stage into a swamp, an ocean, a volcanic island, and a night sky. A mobile platform built into the stage moved up and down, extended, retracted, and curled onto itself like a scorpion tail, enabling the set to become a bridge over water, a motorboat, and a rocket ship.

I have never been disappointed by a Cirque du Soleil performance. The visual spectacle and jaw-dropping performances were stunning as always. Particular highlights for us were the opening act high bars with colourful frogs and lizards soaring joyfully through the air, narrowly missing each other. 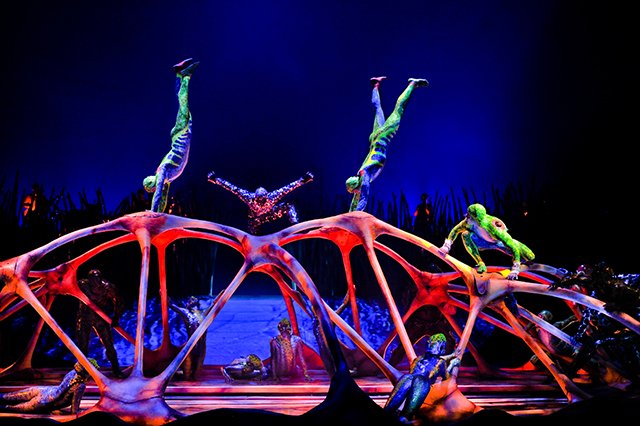 Inspired by Tibetan bowl dancers, the Unicycles and Bowls act had me mesmerized. These gorgeously costumed ladies amazed the audience by kicking brass bowls at each other and catching them on their heads, all while straddling 7 foot tall unicycles. The lush makeup and costumes were nearly as impressive as their feats of balance. 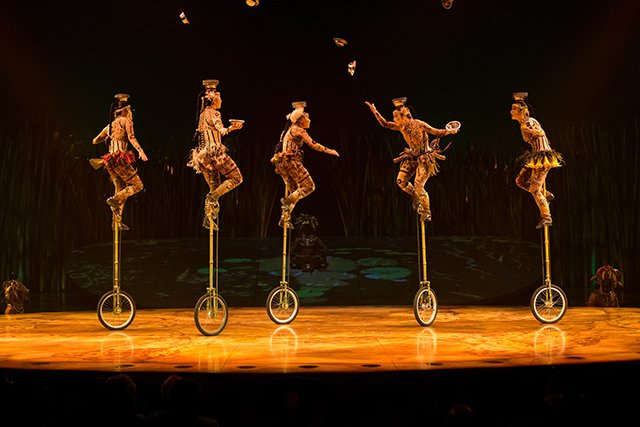 Another favourite act was the couple on the Fixed Trapeze teasing and flirting with each other high in the air. They made it look so graceful and effortless, but I can’t even imagine the strength and complete trust this routine requires. They worked without a safety net or safety lines, just a big pillow on the stage underneath them. As she dangled by her neck, I was on the edge of my seat afraid she might fall. 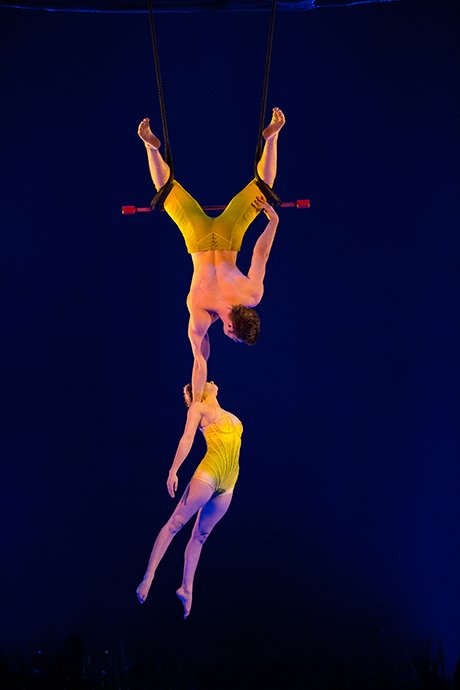 The Russian Bars finale was just incredible. I couldn’t believe my eyes as the acrobats flipped and tumbled over twenty feet in the air without one misstep, all on a 6 inch wide flexible plank held on their fellow performers’ shoulders. The oohs, aahs, and gasps from the audience members around me confirmed I wasn’t the only one dazzled by their athleticism and astonishing acrobatics. 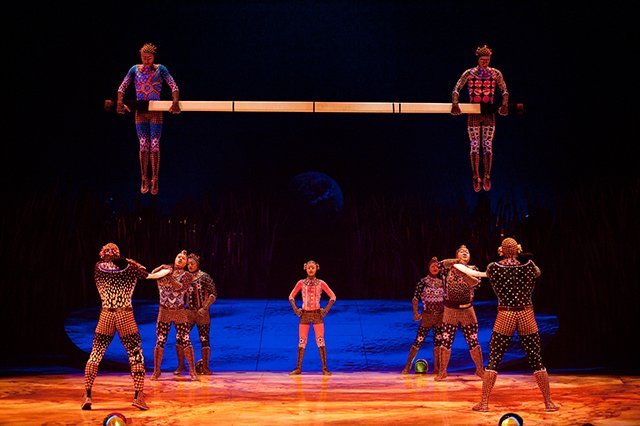 The entire two and a half hour show was set to beautifully evocative world music inspired by First Nations and Native American music. From start to finish, we were enthralled by the magic and pageantry of this performance. If you’ve attended a Cirque du Soleil performance before, then you know just what I mean. If you haven’t experienced the magic of Cirque du Soleil yet, what are you waiting for?

After the show, I had the opportunity to take a backstage tour and meet some of the performers. It was a real eye opener learning just how much goes into making the show we had just enjoyed. 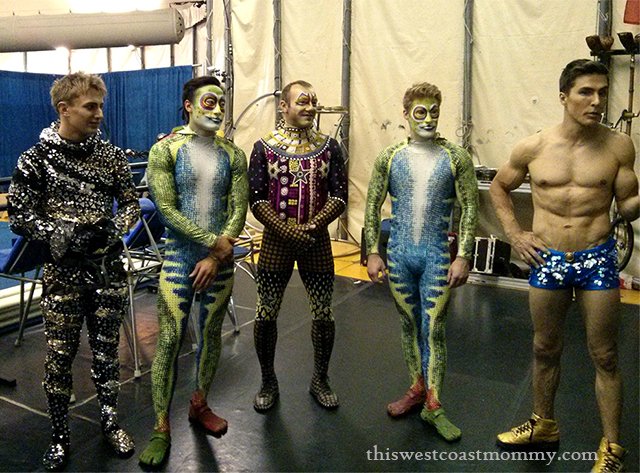 TOTEM is a travelling village. The international cast of 45 performers comes from 16 countries: Belarus, Canada, China, the Czech Republic, Finland, France, Germany, Italy, Japan, Moldova, Mongolia, Russia, Spain, Ukraine, the UK, and the US. A total of 170 people travel with TOTEM: 45 performers, 70 employees, and 55 family members.

It takes 65 semi trucks to move the show from site to site, 8 days to set up, and 3 days to take everything down. We got to check out the costume department where I found out that just the 1500 costume pieces themselves take up a whole truck. All the costumes are made from scratch, including dying and printing all the fabrics in house in Montreal. Every performer is measured using a 3D scanner to ensure the costumes fit perfectly. 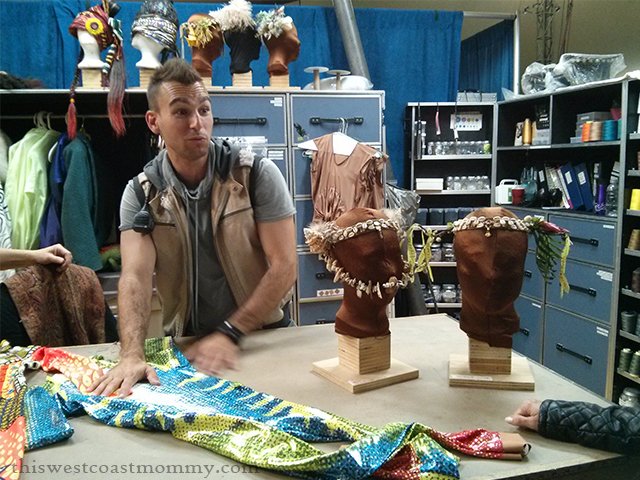 Each performer is responsible for doing their own makeup. Before the tour even starts they travel to Montreal for 18 hours of hands on training. I learned that the frog’s makeup is one of the most complex designs in the show. It has 22 different steps and can take up to 3 hours to do!

I loved learning how Cirque du Soleil takes care of its artists. The TOTEM team travels with two physiotherapists to help keep the performers fit and injury-free, a necessity with up to 9 or 10 performances a week. And with spouses and children travelling along with the troupe, it’s clear Cirque du Soleil values family too.

Many thanks to Cirque du Soleil and to our friendly tour guide Francis for a magical evening!

TOTEM is now playing under the Grand Chapiteau at Concord Pacific Place through July 6, 2014. Child tickets start at $40 and adult tickets at just $50. Buy your tickets online now! 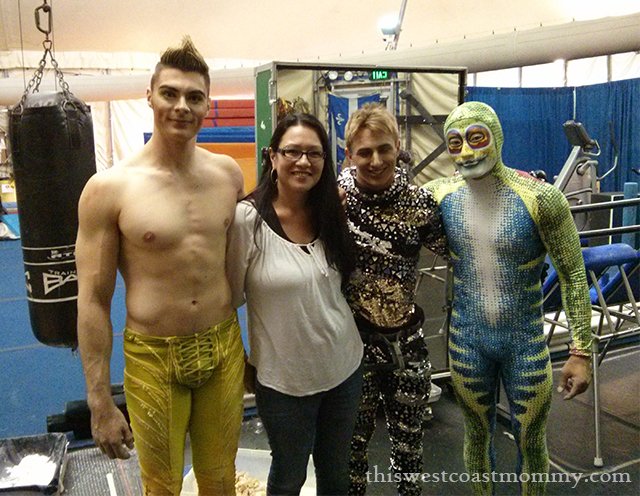