When I was a little girl, I was “a bit horse mad” as my father called it. For years, I begged my parents for a pony and riding lessons. I watched riding competitions on TV and could instantly identify an Arabian from an Appaloosa from a Quarter Horse. I read my copies of Black Beauty, The Black Stallion, and Misty of Chincoteague over and over again until they were tattered and worn. I was always fascinated by the power, grace, and beauty of horses. What girl didn’t dream of galloping away from homework, chores, and a humdrum life?

So of course I said, “You bet!” to an invitation to bring the family along to see Cavalia’s Odysseo show currently playing in Vancouver. Both for the romantic horse girl still inside of me, and for the anticipation of wowing my own little girls with this celebration of all things equine. 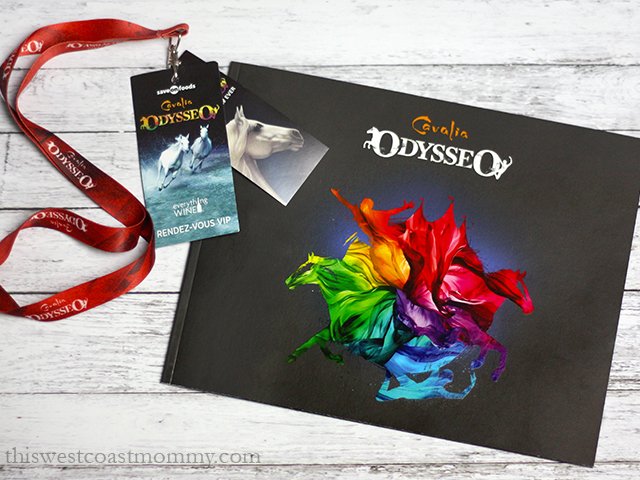 Cavalia graciously hosted us for a Rendez-Vous VIP experience under the Big White Top this week, and were we ever spoiled. Here’s what the package includes:

The VIP evening starts with an amazing spread of upscale, fresh and delicious dishes. We’re talking the good stuff here: sirloin steak, tiger prawns, shrimp dumplings in deep fried wonton wrappers, curried dal (lentils) with naan bread, kale Caesar salad. I think there was some cous cous and pasta salad too, as well as an assortment of crackers and the best hummus I’ve had in a long time. Staff kept the dishes coming as long as anyone was eating. Things look a bit picked over here, and the reason is because everything was sooo good! Several open bars around the room provided unlimited water, juice, pop, wine, and beer. 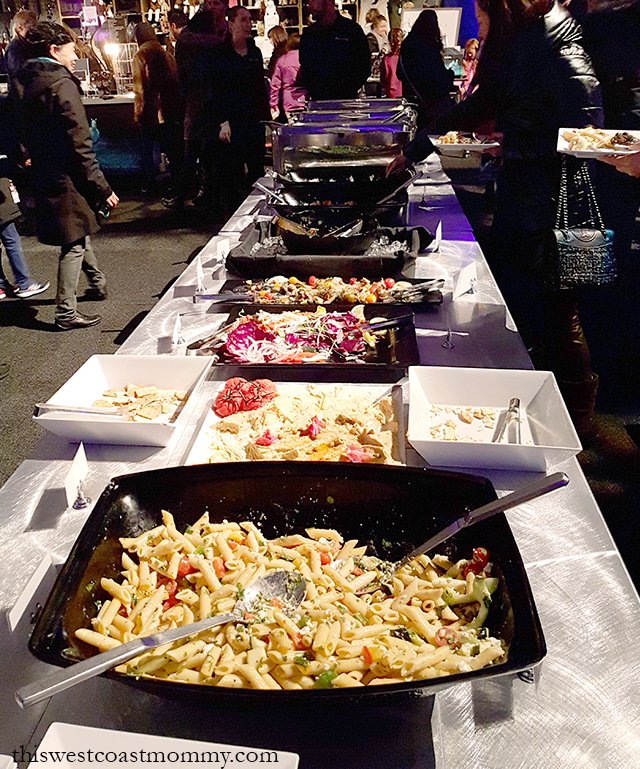 For those who might be a little nervous about trying “gourmet food” there was a kids’ corner with more kid-friendly fare like cheese pizza, sliders, and hot dogs. This was where we picked up complimentary bags of popcorn for the show too! 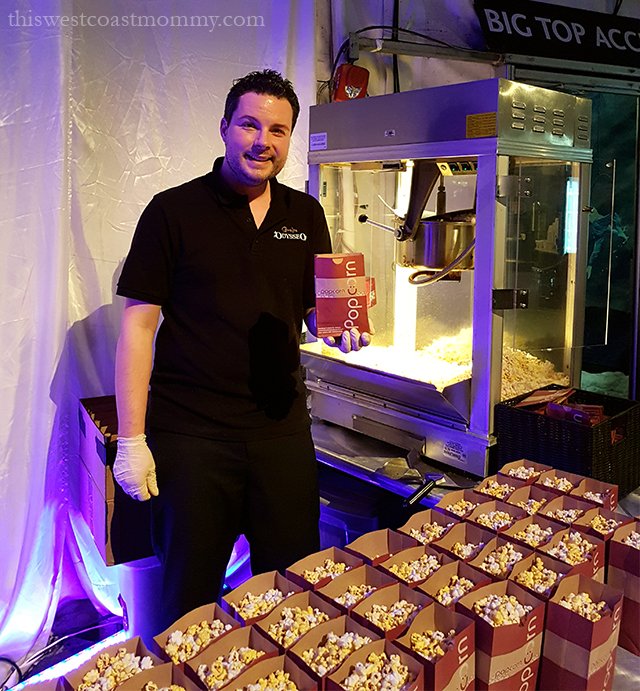 After dinner we found our seats and settled in for the first half of the show. The tent is an intimate setting so I don’t think any of the seats were far from the stage, but VIPs are seated in the first nine rows (six on the side) so you’re up close and personal. From our seats in the fifth row we could see the performers’ expressions and the horses muscles rippling as they performed. The people seated in the row ahead seemed amused by the girls’ excited stage whispers, “There’s a horsie. And another horsie. Look, it’s another horsie! Four horsies! Five horsies!” 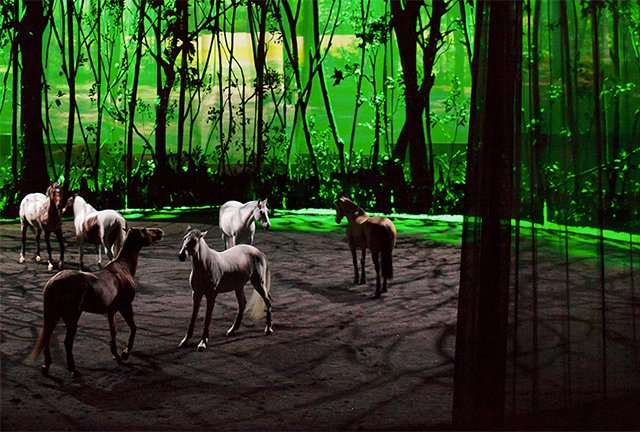 Cavalia Odysseo stars 65 horses and 48 human artists. The production’s Cirque du Soleil roots are on display in its structure of alternating acts, live music and singers, beautiful landscapes, and gorgeous choreography. The arena is smaller than I would have thought, but projected images on the back screens and on the arena itself create the illusion of a horizon and multiple environments for the performers.

The communication between performers and horses is apparent from the very first moment. In several acts, the horses are completely free – no saddle, harness, or bridle – and they work in complete harmony with their humans with just the slightest of verbal cues. 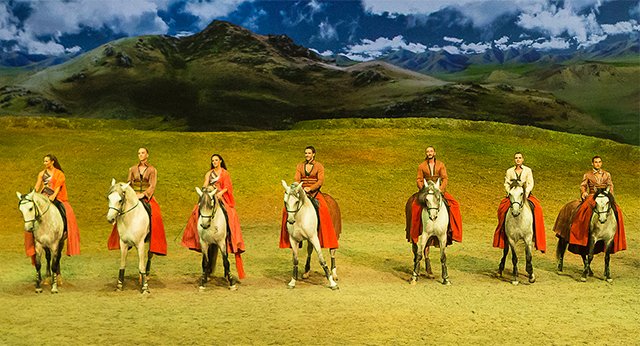 The show started off slowly with a pastoral scene showcasing that wonderful communication, then performers rode out standing on the backs of two horses trotting in tandem. The girls really perked up at the uptempo Fête du Village act (Village party) when horses, tumblers, and performers wearing huge spring shoes showed off their jumping prowess by leaping over handheld beams.

The Carosello (Carousel) was the only major set piece dropped down from the ceiling. This act featured acrobats performing feats of strength and balance on the vertical poles. 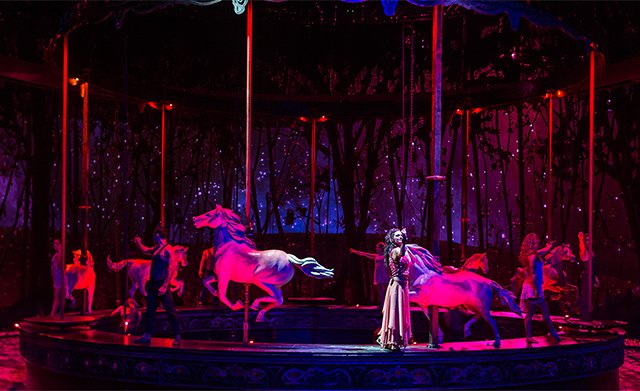 During the 30-minute intermission, we returned to the VIP area for a washroom break and to indulge in dessert. The tables were laden with fruit plates, mini cheesecake bites in an assortment of flavours, various cakes, lemon bars, and tiramisu. If you only have room for one dessert, definitely grab a slice of the tiramisu. Again there was a separate dessert table for kids with chocolate-drizzled fruit and giant cookies.

The acts only got bigger in the second half. All four of us were astonished by the acrobats who entered the arena to perform in the Appel d’Afrique (Call of Africa). We were dazzled by the African singing and drumming mixed with amazing tumbling and feats of strength. Judging by the gasps and murmurs in the audience around us, so was everyone else. The performers led an interactive call and response with the audience chanting, “O walu guere moufan,” a phrase from the Susu language, the national language of Guinea, which translates as, “No more war on Earth.”

Les Anges (The Angels) was my favourite act of the night. In a seamless integration between human and equine artistry, pale grey horses galloped around the ring towing the angels along a circular track and creating patterns with the hanging cloth “wings”, while the angels hung and performed acrobatic feats high up in the air. Truly stunning. 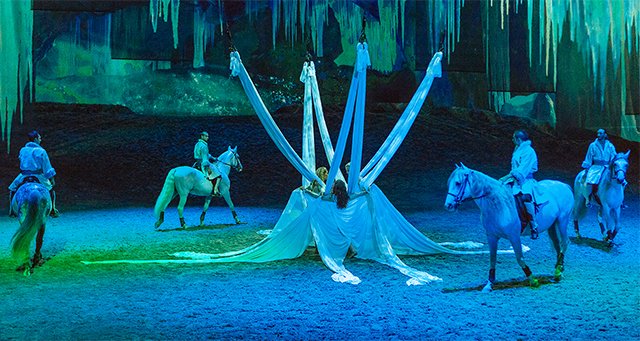 For the final act, the lower arena was flooded with water. The galloping horses combined with the rushing water projection reminded me of the unicorns trapped in the sea foam in the animated classic, The Last Unicorn, though hubby thought it was more remininscent of the Elven steeds racing down the raging river in Lord of the Rings. 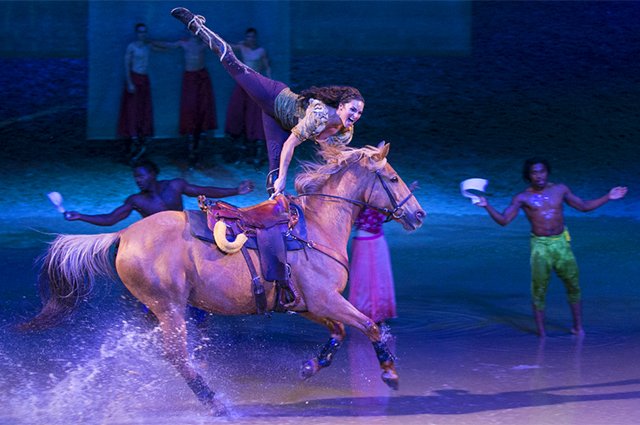 After the show, VIP ticket holders got to visit the stables and see for themselves how the horses are cared for. 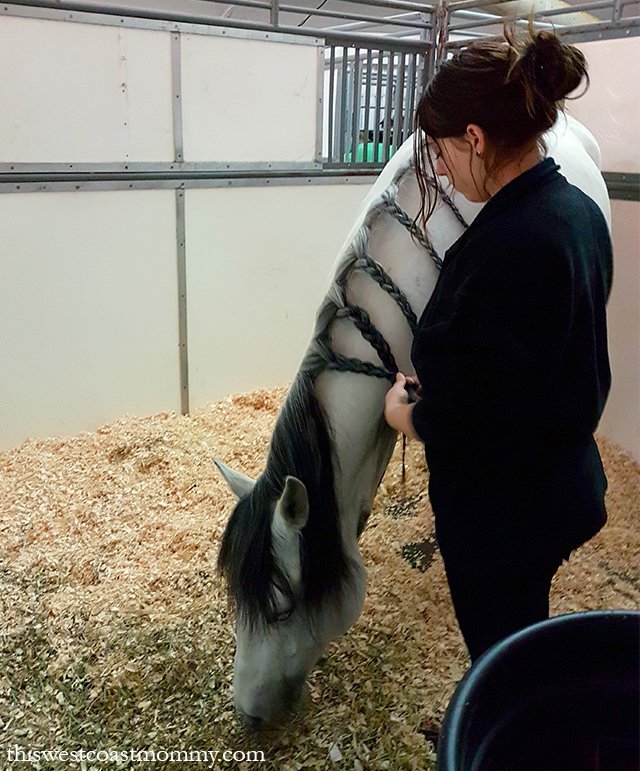 You aren’t permitted to touch the horses, but it was still a fun extra, especially for the kids. Of course, that doesn’t mean the horses can’t touch you! 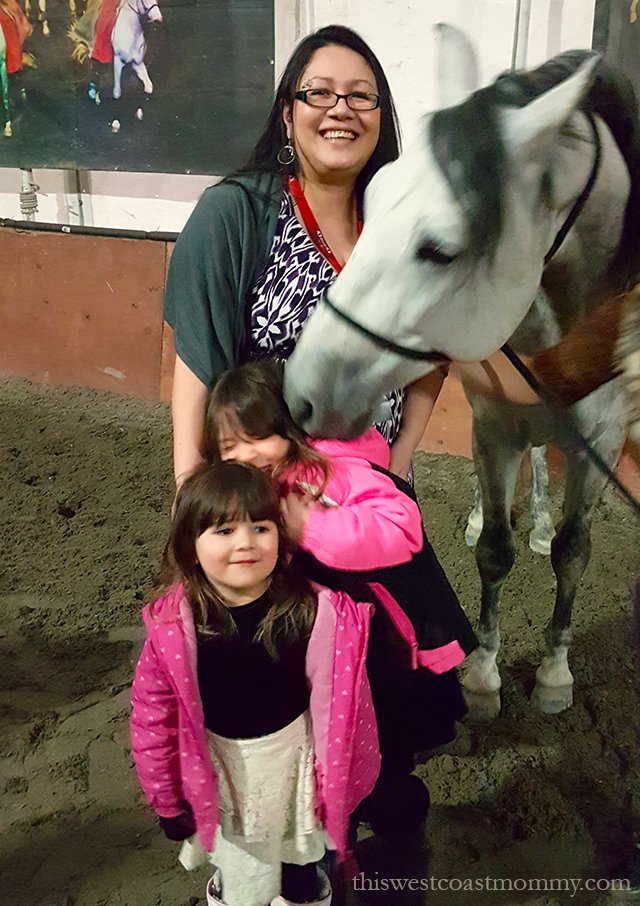 I’m not going to lie, Rendez-Vous VIP tickets are not cheap. I would be hard pressed to take the entire family on my own dime, but as a special couples night out with dinner, dessert, and an open bar, you won’t be disappointed! 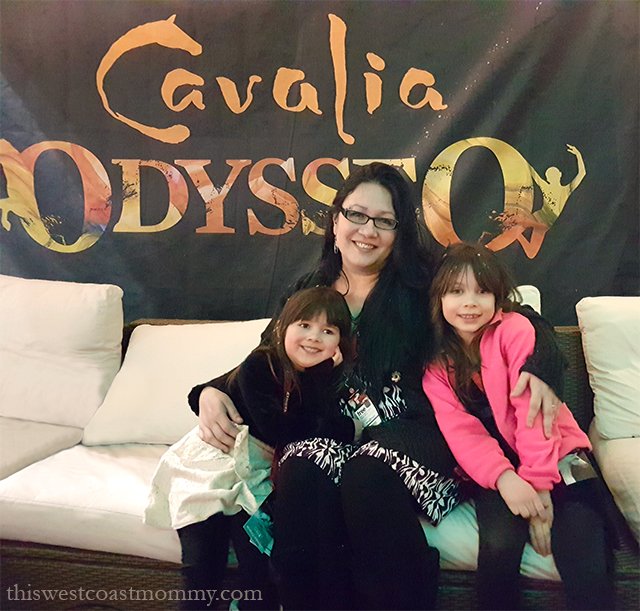 Visit the Cavalia website to learn more about Odysseo and see additional cities on the tour.

Disclosure: I received complimentary media tickets to facilitate this review. All opinions expressed are completely honest and my own, based on my own personal experience. Your experience may differ. This post contains affiliate links. This West Coast Mommy is a participant in the Amazon Services LLC Associates Program, an affiliate advertising program designed to provide a means for sites to earn advertising fees by advertising and linking to Amazon.com. I will receive a small commission if you purchase through my link, at no additional cost to you. This income helps pay for the operating costs of my website – thank you for your support!