Editor’s note: This is part eleven in an ongoing series of birth stories submitted by readers and fellow bloggers, featuring a wide range of women and their birth experiences. This week Camille shares her empowering experience of birthing without fear and her midwife-attended water birth at a birth centre. If you would like to share your own birth story, please visit this post to learn how. ~Olivia

My mother did not have anything good to say about labour. She recalls telling the doctor “Get this thing out of me!” while I, her first-born, was coming into the world. In my twenties, whenever the topic of having kids came up, I would joke that my hips were not childbearing hips. Of course, that statement wasn’t based in fact – I was just scared. But after finding out I was pregnant, I decided that I didn’t want to live in fear for the next 9 months of my life. When I found Hypnobirthing, it felt like the answer to my prayers. My husband and I dutifully attended our classes for weeks and I practised at home, preparing my mind and body for a feat that was unpracticeable.

My due date (a Friday) came and went without fanfare. As a first time mother, I was not at all surprised. The following Tuesday, after a middle-of-the-night pee, I saw the first sign of impending labour: my uterine seal (mucous plug) in the toilet. I crawled back into bed and tried to get some rest just in case it was D-day. It wasn’t. We had an appointment with our midwife scheduled so I was excited to have some news for her. She offered a stretch and sweep to help get things moving but it did not sound at all appealing and I was interested to see how things would unfold without too much intervention. We booked another appointment with a stretch and sweep for Thursday.

The next day, my mother’s birthday, began with irregular surges (contractions). I was in early labour. I continued to pass bits of the uterine seal and experience irregular surges. That evening, the surges began to intensify and I started trying out various positions to relieve the pressure. Over night, as my husband slept soundly, I would periodically climb of out bed, squat on the floor and lean over the edge of the bed to manage the surges. I didn’t get much rest. 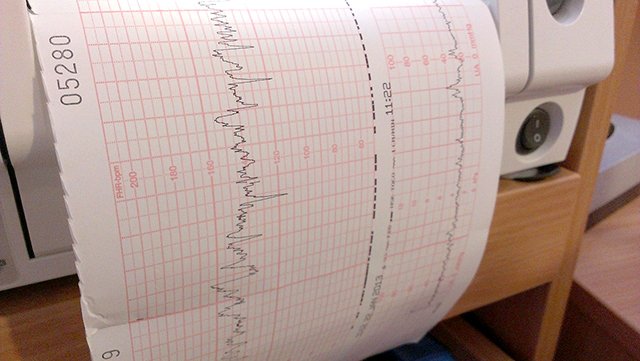 On Thursday morning I was tired. We had our appointment at 10am where we did a non-stress test and a cervical check. My surges were about 8 minutes apart at this point, I was 1cm dilated, 80% effaced, and the baby was doing well. My midwife started the scheduled stretch and sweep – ouch! I quickly changed my mind and decided to just let my body do its thing. With instructions to take some Gravol to help me rest, we headed back home. I spent most of the day in bed as I found that lying down was the easiest way to manage the surges.

If I thought I was tired on Thursday, Friday morning brought a level of fatigue that I could not have imagined. I was exhausted both from lack of sleep and focusing all my energy on dealing with the relentless and seemingly unproductive surges. Where was this baby?! At 9:30am I told my husband to call the midwife as I wasn’t sure how much longer I could do this. I had glorious plans of delivering in the beautiful and relaxing space of the new Toronto Birth Centre but I barely had the energy to speak let alone push a baby out of my body. I remember telling my husband that I wanted to go the hospital just so I could rest. The midwife arrived 20 minutes later and assessed me. I was only 2cm dilated and, by her estimation, the surges were only moderately strong – we were still in early labour. While checking me, she stretched my cervix to 3-4cm and then left with instructions to keep trying to rest, having deftly dodged my meek inquires about the hospital. In her absence, the surges intensified again. She returned at 2pm to check up on me. I was 5-6cm dilated and 100% effaced. The baby was very low and for the first time, she sounded hopeful that we would have a baby shortly. We were now in active labour.

With that, my husband called my sister to help us get ready to leave for the birth centre – he got the car while she helped me get dressed and supported me as I waddled down to the street level of our condo. The car ride over was uncomfortable but short. I stretched out as much as I could on the back seat and my sister and I sang to the Corrine Bailey Rae song that wafted soulfully from the radio. I was anxious but relaxed and the fresh air felt good after being in bed for so long.

We arrived at the Birth Centre at about 3:30pm and I climbed into the tub. It felt wonderful. The midwives dimmed the lights and my sister put on my carefully curated playlist of relaxing and encouraging R&B music. In between surges, I sipped coconut water and mumbled the words to songs I knew better than the little life working its way out of my body. My husband rubbed my back and whispered encouraging words. About an hour later, I felt the urge to push. My midwife did a quick check (9.5cm, membranes still intact), slipped the rest of my cervix out of the way and encouraged me to do what my body was asking of me. I started working with the surges and eventually ended up on my hands and knees. This is where things got fuzzy.

I remember that I looked up at my sister and said “I’m just so tired.” My husband tells me that he was literally holding my head above the water. I remember feeling only sensory overload during this time – there was a lot happening in a small region of my body. After 1.5 hrs of this intensely focused work, the baby’s head was born – with both an arm and the cord around the neck. One minute later, the midwife passed me a slippery little bundle through the water. It was a girl! 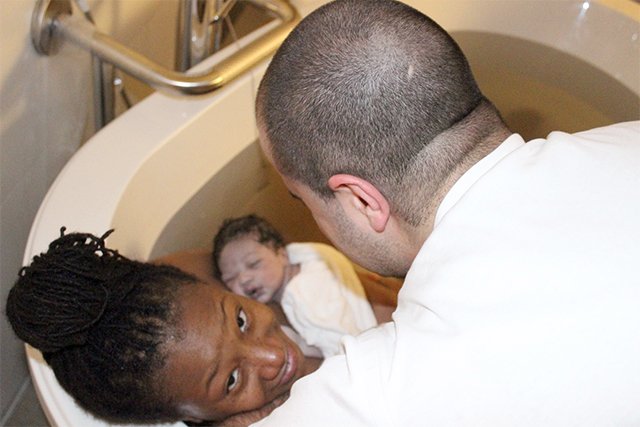 Despite having worked towards this very moment for over two days, it was still a shock. She was quiet and observant and perfect. I was so mesmerized that I did not hear the midwives’ frantic requests for me to allow them to slip the cord from around her neck. After they took care of that, we stared at each other for what felt like ages before taking pictures with Daddy and then carefully getting out of the tub. We had both made it through unscathed. After 15 minutes of the requisite postpartum activities, Baby Girl started rooting and all I wanted to do was feed her. I impatiently waited for the one of the midwives to guide me through the process. She nursed like a champ – it was completely bizarre and completely natural all at once. We snuggled and snacked until we were discharged at 8:30pm – just two and a half hours after she was born.

I was so proud of myself for deciding to not be afraid of this amazing process. I had brought a beautiful little girl into the world, in just the way I wanted, and I was filled with wonder and gratitude. Sometimes the cynical side of me wonders if my experience was a fluke and I get the urge to do it again just to find out. I don’t know what my next birth will be like, but this one was (mostly) fearless.