A couple of weeks ago, my family was invited to a media screening of Disney’s 55th animated movie, Zootopia (now playing everywhere). I wasn’t sure whether the girls would last through the whole thing, particularly my three-year-old, but it turns out I had nothing to worry about. The kids – and the adults too – thoroughly enjoyed this smart, funny, and timely movie! 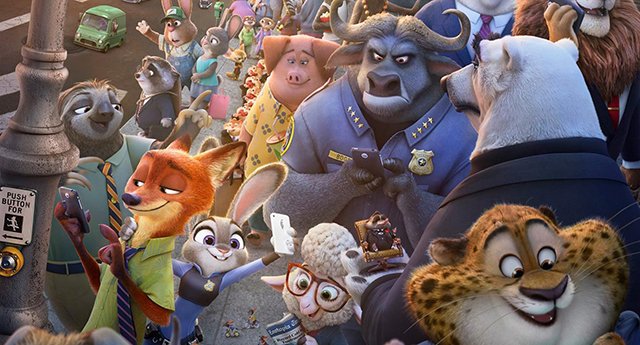 From Disney:
“The modern mammal metropolis of Zootopia is a city like no other. Comprised of habitat neighborhoods like ritzy Sahara Square and frigid Tundratown, it’s a melting pot where animals from every environment live together—a place where no matter what you are, from the biggest elephant to the smallest shrew, you can be anything. But when rookie Officer Judy Hopps (voice of Ginnifer Goodwin) arrives, she discovers that being the first bunny on a police force of big, tough animals isn’t so easy. Determined to prove herself, she jumps at the opportunity to crack a case, even if it means partnering with a fast-talking, scam-artist fox, Nick Wilde (voice of Jason Bateman), to solve the mystery.”

First of all, the City of Zootopia is just beautifully drawn and fun to look at. We loved seeing the ways the city was designed to accommodate all sorts of different animals from giraffes and rhinos to sheep and lemmings. Keep your eye out for those tiny details that make the world complete. For example, phones have a logo of a carrot with a bite taken out of it, instead of a certain well-known fruit.

Officer Judy Hopps, Zootopia’s first bunny cop, desperately wants to be taken seriously. But all the large (and male) officers see her as “cute” and only suitable as a meter maid. After a run-in with the water buffalo Police Chief, she somehow finds herself investigating the disappearance of Mr. Otterton, one of fourteen predator animals to turn up missing. She must find the otter or resign from her job. She meets small-time hustler Nick Wilde, a fox and the traditional adversary to rabbits, and strong arms him into helping her solve the case.

There were a couple of intense scenes of animals going savage that frightened the girls a bit. Kay hid her face in my shoulder, but she wasn’t deterred from enjoying the rest of the movie. It’s packed full of funny sight gags and spoofs of animal behaviour that both kids and adults will enjoy, as well as a few jokes intended for the grown-ups. We first saw the Zootopia trailer before Star Wars: The Force Awakens, and yes, the scene with the sloths running the DMV was just as funny the second time around!

While ostensibly aimed at children, this is one of the most grown-up Disney movies I’ve seen in a long time, up there with Inside Out. On the surface, it’s a classic buddy cop/detective movie full of enchanting characters and engaging plot twists, but its central message of tolerance and standing up to fearmongering, racism, and prejudice is a very modern and timely one.

My family found Zootopia to be clever, funny, hopeful, and simply a great story. Definitely worth seeing!

One last little note in case anyone else caught this: I thought for sure that Officer Judy Hopps was an homage to Officer Judy Hoffs from the late 80s TV series 21 Jump Street (which I watched every week, without fail!), but according to director Byron Howard, it really is just a coincidence. Too bad.

@stitchkingdom @_rich_moore @thejaredbush I just looked up Judy Hoffs. That is what we call a hilarious but amazing coincidence. :).