I’ve bought two new cars in the past few years. I wish I could say that I like bringing home a new car, but I don’t. It’s not the research, it’s not the pressure to find the perfect car for my family. It’s not even negotiating the price (though that part sucks too). The worst part is going to the dealership and talking with the salespeople. I know there are good ones out there, but it’s always a gamble whether I’ll be dealing with someone who treats me with respect, or someone who thinks my vagina makes me incapable of understanding the car-buying process.

I’ve run into multiple car salesmen (and yes, they were all men) who seemed to struggle with the idea that women buy cars too. I find this absolutely bizarre. Even if you happen to be a dyed-in-the-wool misogynistic asshole, wouldn’t simple self-interest lead you to treat women as valued customers instead of patronizing or ignoring them? I mean, car salespeople work on commission, and women actually buy more cars than men do. Women have just as much if not more influence over major household purchases like a car. “Don’t piss off your customer,” should be the number one mantra of any salesperson.

Thirteen years ago when we were shopping for our first family car, I dealt with several salesmen who needed this reminder. On one particular occasion, we actually walked off the lot mid-appointment after a salesperson, an older man, literally would not talk to me. Even after my husband explained that I was the one making the final decision, this salesman persisted in only talking to him and demonstrating the features of the car only to him. When I asked questions, he answered my husband as if I weren’t even there. I told him and his manager exactly why we were leaving. The manager was apologetic; the salesman shrugged his shoulders.

So when we found ourselves in the market for a new car again, I was really not looking forward to that part of it. 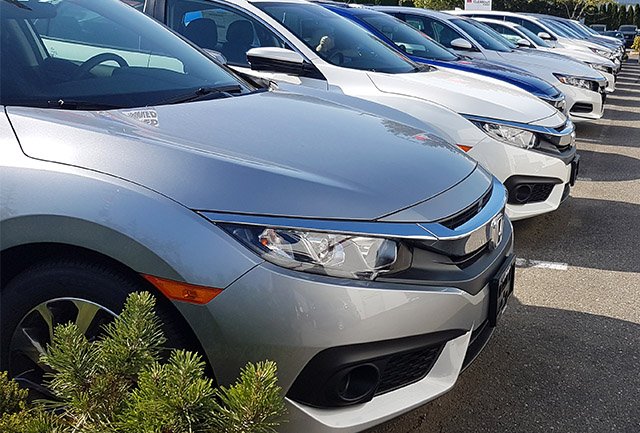 Hubby and I went to a nearby dealership to look at cars and take a test drive. As soon as we walked into the showroom, a salesman walked over and said, “Hello, sir. How can I help you?” Strike one. He introduced himself to my husband and shook his hand, neglecting to introduce himself or shake hands with me. Strike two. So Chris said, “This is my wife, Olivia. She’s the one buying the car.” The salesman nodded and showed us a couple of cars. Then he asked if my husband would like to take a test drive and took down his info only, despite Chris reminding him that I would be test driving the car too. Strike three.

So I was already annoyed when the salesman announced that he had to take a prior appointment, but he would be leaving Chris in good hands with another salesman. I was standing a few feet ahead of Chris, and the new salesman literally walked around me to introduce himself to my husband. “Hi, I’m Daniel. You’re Chris? Let’s take that test drive.”

At that point I’d had enough. Ignoring the fact that I’d already said, “This car is for me. I’m buying the car,” it’s basic courtesy to acknowledge somebody’s presence. When is it ever acceptable to greet one half of a couple and completely ignore the other person? I was already pissed at how the first salesman had largely ignored me, but when this second salesman treated me like I wasn’t even there, I blew my top.

I loudly told both salesmen, “Listen up. I’m the one buying the car. Not my husband. Not one person has asked me my name or shaken my hand. You keep talking to him, but he’s not the one buying the car. He. Is. Not. Buying. The. Car. Do you want my business or not?” A sudden silence fell. I noticed the female receptionist looking over at us and smiling a little. Not the first time?

Even then, the situation was theoretically salvageable. Either one of them could have genuinely apologized. That second salesman could have walked back over to me and said, “I’m sorry. Let’s start over. My name is Daniel. What’s yours?” Instead, the first salesman told the new guy, “Okay, okay, you must only talk to the lady and explain everything to her.” That was their idea of fixing the situation. Notice that they still didn’t know my name?

Despite all this, I decided to keep going as I just wanted the test drive. At the car, I held out my hand and introduced myself to the flustered salesman, noting he still hadn’t done the same. He shook my hand, mumbled something, and scurried away leaving me and my husband to take the test drive alone.

Two days later, we went to a different dealership and bought our new car there. The new salesman introduced himself to me and my husband. He shook both our hands. He spoke to both of us, made eye contact with both of us, answered all our questions, and pointed out a good spot on the test drive for us to switch seats. When we sat down to fill out the paperwork, he asked who would be buying the car and negotiated the price with me. None of these things should be out of the ordinary. That’s just how you treat a customer, and that’s why he got the sale.

In the immortal words of Julia Roberts: 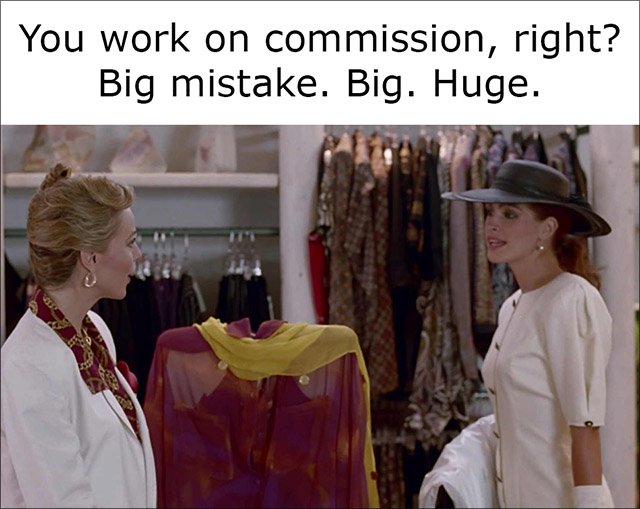