When Do the Potty Battles Stop? | This West Coast Mommy

On the whole, I think potty training has been going well. Teagan has been out of diapers during the day since March, and it’s been almost six weeks since the last time she wet her trainer at night. She’s now in underwear full-time, even overnight.

But I’m wondering when the potty battles stop. Every morning when she wakes up, I remind her to go to the potty. “No! I don’t have to pee! I’m never going to pee again!” This child has been in bed for over ten hours. I know she needs to pee! It’s a negotiation. Every. Single. Morning. I sit in the washroom with her and remind her that we can’t move on with the rest of our day – breakfast, playing, etc. – until she goes to the potty. And then I wait her out. 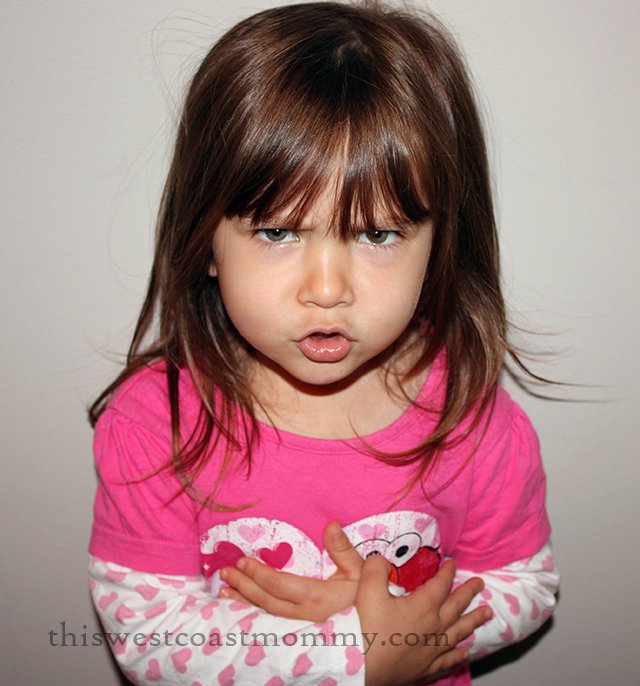 (Of course, I have adorable pics of Teagan on the potty, but I wouldn’t do that to her. So you’ll just have to make do with her “No!” face. I get this a lot lately. Either that or the back of her head when she turns her back and refuses to look at me. Aargh!)

Speaking of public toilets, you know those seats with the open front? What a nightmare they are for both of us! I don’t believe they’re intended for anyone under the age of 6. We spent the day at the Aquarium a few weeks ago, and they only had those open front seats. We stood in that stinky stall for at least 15 minutes negotiating a potty break. And then when she finally, tearfully, agreed, I basically had to hold her on the seat, trying to keep her bare legs and her pants from rubbing all over the rim of the toilet bowl through that gap. Yuck! I’m pretty sure she got at least as much pee on the floor as she did in the bowl.

Just about the only time she goes to the washroom willingly is when we’re sitting down to dinner. Four out of five times, that’s when she needs to go potty. Right now! Coincidentally, she never needs to pee when dessert is on the table. Hmm…

With preschool starting in a couple of weeks, I’ve been teaching her to take care of her potty routine on her own. I don’t actually think she’ll use the washroom at preschool, but on the off chance she does, I want her to be prepared. I’m pretty sure she’ll try to hold it the whole time she’s there though, so I guess we’ll be getting up a little earlier to leave plenty of time to battle over going pee before leaving for school. Sigh.

Do you have any potty battles of your own? When did your child stop battling potty time?