What Do I Tell My Children? | This West Coast Mommy

I haven’t shared this publicly until now, out of respect for my family’s privacy. But now that we know the worst, I needed to write something about why this Christmas doesn’t feel like much of a Christmas. So, with my mother-in-law’s permission, here’s what’s going on.

About two and a half months ago, we first heard that my father-in-law wasn’t feeling well. He went to the emergency room four weeks ago when he kept losing weight, and that’s when we got the news. Stage 4 colorectal cancer, metastasized to his liver, lungs, lymph nodes, and even into a rib bone. He was able to go home after a couple of weeks, but he ended up being readmitted to the hospital earlier this week with incipient pneumonia on top of all that. He’ll be there over Christmas.

He started palliative radiation therapy on Thursday, in an attempt to shrink his tumour to make him more comfortable. It’s shocking to me how this man who was so vital and vigorous only a few short months ago probably won’t see Keira’s second birthday. It breaks my heart knowing that she won’t have any memories of him, and it’s unlikely Teagan will remember much about him either.

Until now, we’ve only told Teagan that Papa is sick. Every day or two she asks us, “Why is Papa sick?” I have no answer for her other than to say, “Sometimes people just get sick.” And then she’ll ask when he’s going to get better. Honestly, I don’t know how to answer this. I don’t want to lie to her or build up false hope, but I also don’t want to give her more than she’s equipped to deal with. I have tried to gently prepare her by letting her know that sometimes people don’t get better. She’s only three, but the reality is that she will have to deal with her grandfather’s death sooner than later.

Yesterday was Teagan’s holiday concert, and afterward she asked us, “Why wasn’t Papa at my concert?” Hubs told her that Papa was very sick and in the hospital. Teagan asked to go see him so she could give him a big hug. She hasn’t seen him since before his diagnosis, and we’ve been struggling to find a good time for her to see him before it’s too late. We were hoping he’d rally a bit with treatment and put on some weight after the initial diagnosis, but his physical condition has continued to deteriorate instead. We’ve decided to bring her to see him this weekend, but he looks so sick, I’m afraid that she’ll be scared when she sees him. I’m worried she’ll refuse to hug or talk to him.

I worry about my husband too. He’s trying so hard to be strong for his daughters and for his mother, and I worry he’s postponing his own grief to deal with everything else. I worry about my mother-in-law who’s been trying to take care of her husband single-handedly and running herself into the ground.

And of course, it’s the Christmas season. People to visit, decorations to put up, crafts to make, presents to buy and wrap, carols to sing, lights to see… And really, none of the adults feel like doing any of it. If we didn’t have the girls, I don’t think there would be much of a Christmas this year. But for them we’re trying to keep things as normal as possible. Is that a good thing? I hope so. I know it’s only getting to get harder.

I need to be really present with my children and focus on spending time with my family over the holidays, so I’ll be taking some time off from the blog until the new year. In the meantime, I want to wish each and every one of you a wonderful holiday season filled with love and friendship and family.

And please, get screened if you’re over 50 (or younger if you’re high risk). Colorectal cancer is very treatable if detected early. 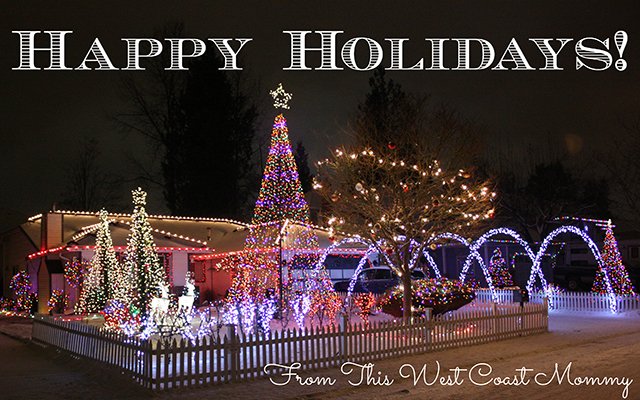