Dinosaurs have always fascinated us. Sure they come in all sizes and shapes, but when we think of dinosaurs, we immediately think of towering behemoths browsing the tops of tropical trees, or terrifying killers with massive teeth and claws. We’re captivated by the mystery and tragedy of their extinction 65 million years ago, leaving behind only a scattering of fossilized bones, teeth, footprints, nests, and coprolites (a fancy way of saying fossilized poop!). Check out some of the best places in Canada and the US to bring the family to see and touch dinosaur fossils, find out how they lived, and learn more about what paleontologists do. 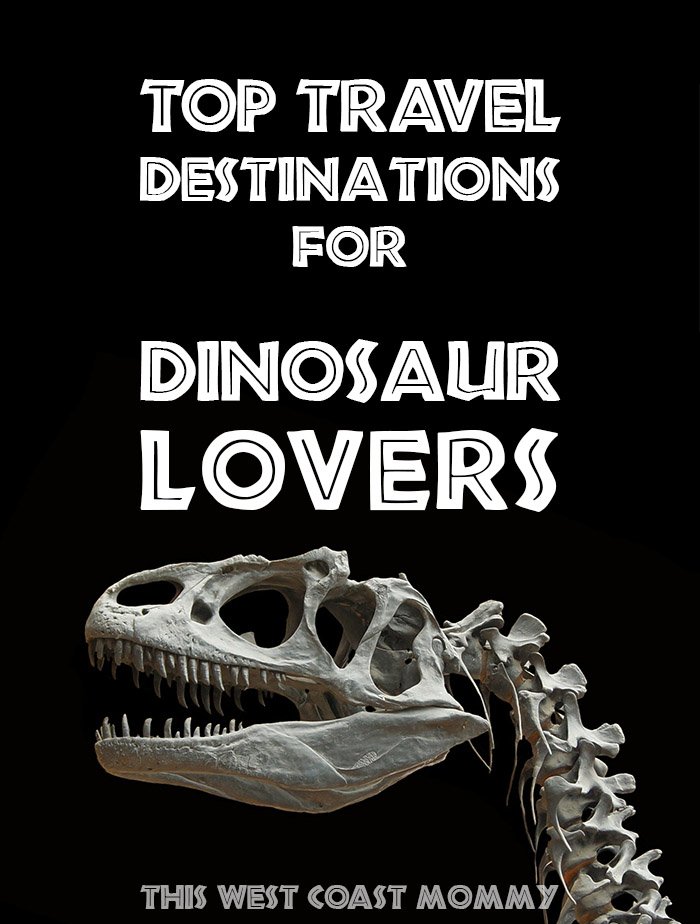 Alberta, Canada boasts the richest source of dinosaur fossils in the world. Located in the Badlands of Alberta and about an hour and a half drive northeast from Calgary, Drumheller is justifiably known as the Dinosaur Capital of the World. 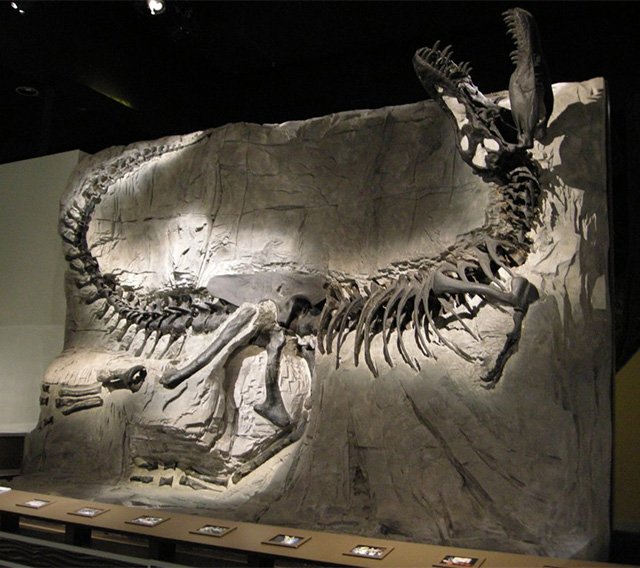 Image of “Black Beauty” by Madeline Deaton is licensed under CC BY 2.0

The Cretaceous Alberta and Cretaceous Garden exhibits offer a glimpse of what Alberta would have looked like in the time of the dinosaurs. Visitors can also watch technicians prepare fossils in the Preparation Lab or head out on a mini-dig with museum staff to a simulated dig site to uncover fossil replicas using real-life tools and paleontological techniques. 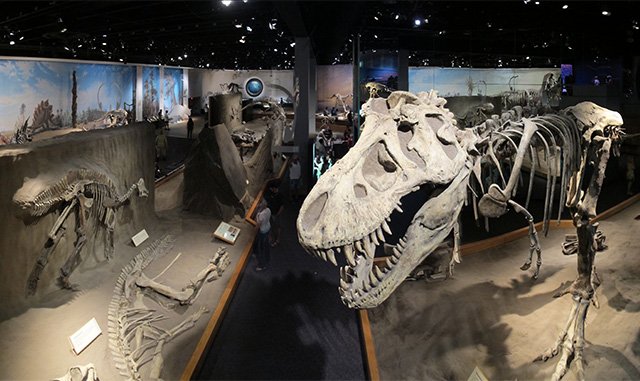 “Royal Tyrrell Museum of Palaeontology” by Steven Mackaay is licensed under CC BY-SA 3.0

But wait, there’s more! The Fossil World Dinosaur Discovery Centre (open March to October) is just a few minutes away, offering a “kid-friendly natural history museum edutainment experience” with animatronic dinosaurs, over 1000 real fossils, a play centre, fossil dig activity, and mineral mining activity. The town of Drumheller also boasts the World’s Largest Dinosaur, an 86-foot-tall kitschy fibreglass Tyrannosaurus rex that visitors can enter and climb all the way up to a viewing station in its jaws for a scenic view of the Badlands. 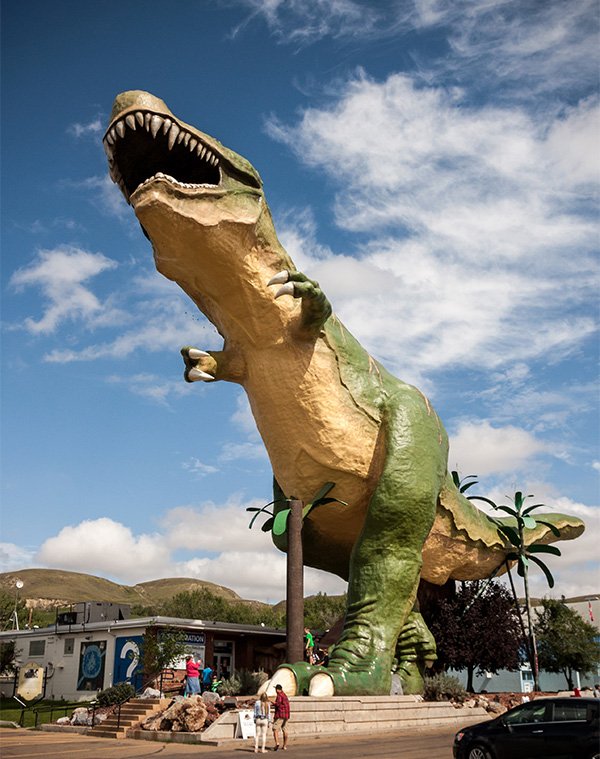 Image of Drumheller T-rex by Federico Moroni is licensed under CC BY-NC 2.0

From Drumheller, head southeast about two hours to Dinosaur Provincial Park, a UNESCO World Heritage Site and one of the richest sites of dinosaur fossils in the world with 58 different dinosaur species discovered and more than 500 specimens from the park exhibited in museums around the world. Keep going south to Devil’s Coulee Dinosaur Heritage Museum, Canada’s first known dinosaur nesting site.

Or drive north into central Alberta and hike through the Jurassic Forest‘s 40 acre prehistoric preserve and discover more than a dozen large animated dinosaurs hidden in the old growth forest, triggered by motion detectors as you approach.

The Carnegie Museum of Natural History in Pittsburgh is home to the first specimen of Tyrannosaurus rex ever discovered. The museum’s Dinosaurs in Their Time exhibit contains dozens of original fossils from the Mesozoic Era placed in scientifically accurate reconstructions of their prehistoric habitats. 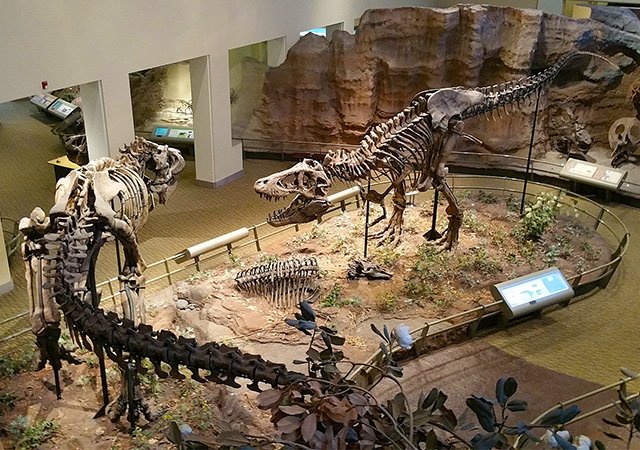 “Tyrannosaurus Rex at the Museum” by James Tiffin Jr. is licensed under CC BY-SA 2.0

While technically not dinosaurs, the adjoining Cretaceous Seaway exhibit takes visitors under the Western Interior Seaway to view prehistoric giants of the ocean including fossils of a hunting Plesiosaur and a 40-foot Mosasaur. Don’t forget to visit the Carnegie Paleolab, a working paleontology lab that offers visitors a window into scientific research at the museum, and make time for the kids to visit the Bone Hunter’s Quarry where kids can chip away at rock matrix to reveal fossil casts buried below, just like a real paleontologist!

On your way out, be sure to stop by the life-size statue of Dippy the Dinosaur for photos. This statue stands in front of the building and commemorates the museum’s first dinosaur find in 1899.

The Dinosaurs at the Zoo exhibit at the Pittburgh Zoo is full of moving, roaring, eating, water spitting dinosaurs lurking in a prehistoric jungle. Kids can also participate in a fossil dig and even control one of the animatronic dinosaurs.

The Dinosaur Hall at the Natural History Museum of Los Angeles County has hundreds of real fossils on display. Get up close and personal with the world’s only Tyrannosaurus rex growth series featuring a baby, juvenile, and sub-adult, as well as excellent specimens of Triceratops, Stegosaurus, and long-necked sauropod Mamenchisaurus. Visitors can go behind the scenes to observe the fossil preparation process and even touch some real fossils in the real working paleontology Dino Lab, and kids will love meeting Hunter the T. rex and Dakota the Triceratops, the roaring and roaming life-size dinosaur puppets in the Dinosaur Encounter show. 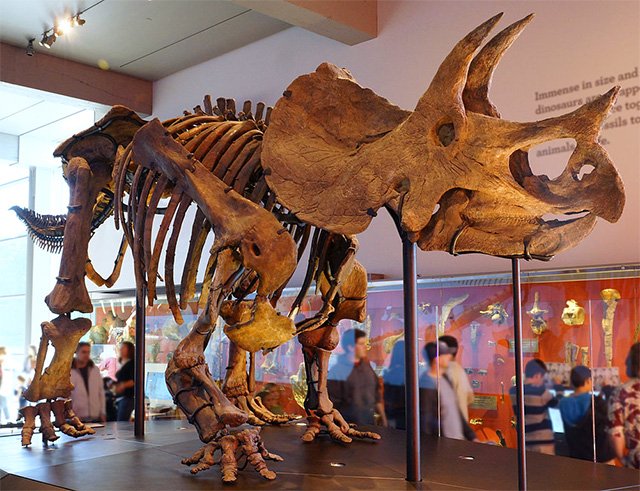 For more prehistoric science, visit the nearby La Brea Tar Pits where you can view Ice Age fossils and specimens like saber-toothed cats (smilodons), mammoths, and dire wolves pulled from the tar pits. It’s the only active urban paleontological excavation site in the USA.

Afterwards, take the kids to Wonder of Dinosaurs in Redondo Beach. Part museum and part indoor theme park, this place has over 100 dinosaurs models and two floors of dinosaur-themed activities like kiddie rides, miniature golf, electric stuffed dinosaurs, and a dino maze.

Visitors to the American Museum of Natural History in NYC are greeted by a Barosaurus mama rearing up 50 feet in the air as she defends her young from a predator Allosaurus in the Theodore Roosevelt Memorial Rotunda. The David H. Koch Dinosaur Wing has two separate halls featuring over 100 types of dinosaur fossils and models including Tyrannosaurus rex, Apatosaurus, Allosaurus, and a 122-foot-long cast of Patagotitan mayorum, a new species of dinosaur recently discovered in Patagonia. Bring the kids to the Discovery Room where they can assemble a life-sized Prestosuchus, dig up an Oviraptor nest, and handle real fossils. 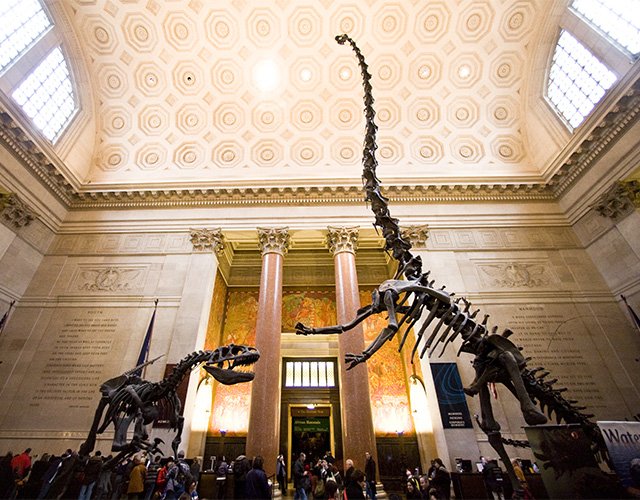 “You Can Change Your Mind” by Thomas Hawk is licensed under CC BY-NC 2.0

Just across the Hudson River in New Jersey, Field Station: Dinosaurs (open late June to early November) is an outdoor prehistoric theme park for kids aged 3-11 featuring 32 life-sized animatronic dinosaurs with built-in sensors and facial-recognition technology so they move when visitors approach. Visit the Paleontologists’ Laboratory to get the feel of a dig site or catch the black light puppet show.

Straddling the border of Utah and Colorado, the Dinosaur National Monument allows visitors to view and touch real 149 million-year-old dinosaur fossils still embedded in rock. The Quarry Exhibit Hall on the Utah side of the monument has 1,500 dinosaur bones on display in the Carnegie Dinosaur Quarry, including Allosaurus, Apatosaurus, Camarasaurus, Diplodocus, and Stegosaurus. 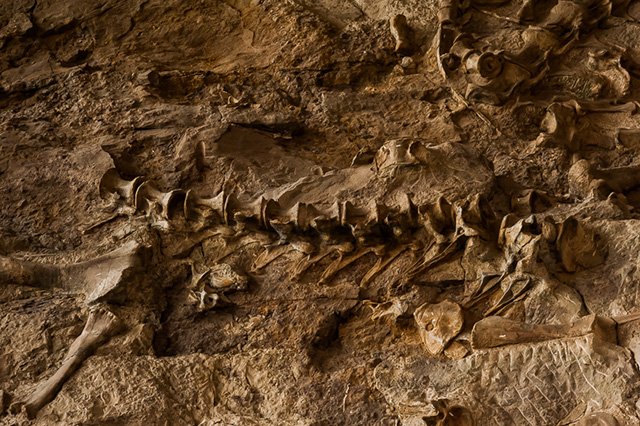 About three hours west, the Museum of Ancient Life at Thanksgiving Point holds one of the largest displays of mounted dinosaurs in the world with more than 50 hands-on exhibits and 60 complete dinosaur skeletons including two Tyrannosaurus rex, the world’s most complete Stegosaurus skeleton, a Quetzalcoatlus with a 40-foot wingspan, and a 120-foot-long Supersaurus. Dig for fossils, observe a working paleontology lab, and take the kids to the Junior Paleo Lab (open Saturdays and all summer) where they can cast their own fossil or learn how to prepare a fish fossil.

Just north of Salt Lake City, Ogden’s George S. Eccles Dinosaur Park has both a working fossil museum with a paleontology lab, and several acres outside displaying more than 125 realistic dinosaur statues with sound effects like crashing trees and earth-shaking footsteps. Kids can dig for fossils in the sand pit and play on the dino-themed playground.

The Wyoming Dinosaur Center in Thermopolis boasts more than 30 mounted skeletons including Triceratops, Stegosaurus, and Velociraptor, but the highlights here are Jimbo the Supersaurus and a rare Archaeopteryx fossil (the “Thermopolis specimen”), the only one in North America. The museum also runs the Dig for a Day Program at a working excavation site nearby. From late May through mid September, the whole family can hunt for real fossils in one of the world’s richest bone beds. If you find any fossils, your name, the bone, and its location will be publicly recorded in the Wyoming Dinosaur Center’s bone registry! 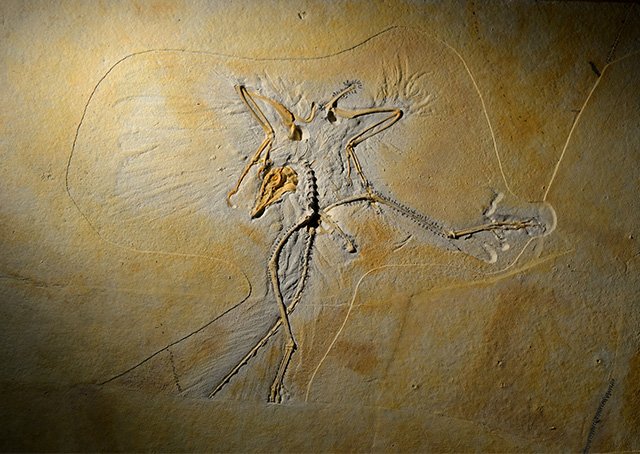 Image of Archaeopteryx fossil by Incidence Matrix is licensed under CC BY 2.0

Elsewhere in Wyoming, you can visit the Fossil Cabin near the town of Medicine Bow, about three hours southeast from the museum. Built from 5,796 real dinosaur fossils by Thomas Boylan in 1932, this roadside attraction was dubbed “the oldest cabin in the world” by Ripley’s Believe It or Not. Unfortunately, the fossil museum inside is currently closed to the public.

Chicago’s Field Museum‘s Elizabeth Morse Genius Hall of Dinosaurs houses a large collection of fossils and over a dozen mounted skeletons including Stegosaurus, Apatosaurus, and a scene with Daspletosaurus standing over its soon-to-be-lunch Lambeosaurus. Visit the Fossil Prep Lab to see how preparators get fossilized specimens ready for display or research at the museum. Until January 2019, you can also check out the Antarctic Dinosaurs exhibit featuring two new species of dinosaurs discovered in what used to be a lush, forested environment.

The most impressive displays are Máximo the Titanosaur (Patagotitan mayorum), the biggest dinosaur ever discovered measuring 28 feet tall and weighing in at 70 tons; and Sue, the largest and most complete Tyrannosaurus rex skeleton in the world. 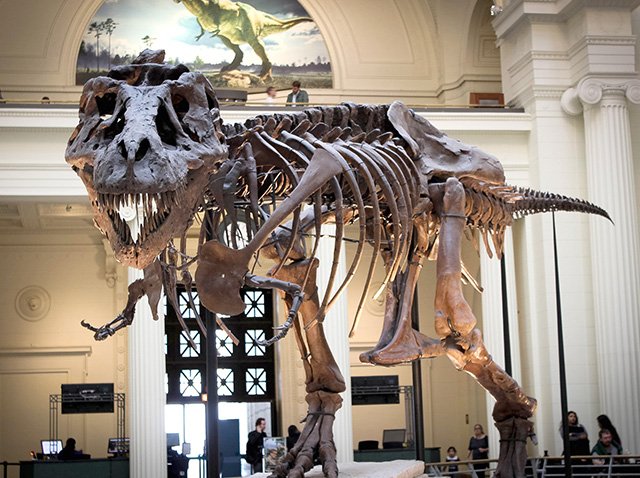 Sue the Tyrranosaurus rex in the Great Hall at the Field Museum. Sue is currently being moved into the Griffin Halls of Evolving Planet and will be ready for viewing again in 2019.

The Chicago Children’s Museum houses the Dinosaur Expedition, a re-creation of the expedition to the Sahara that discovered a brand new species of dinosaur, Suchomimus. Kids can see the mounted Suchomimus skeleton, dig for bones in the excavation pit, and learn what it’s like to be part of a dino expedition team.

Only an hour north in neighbouring Wisconsin, the Dinosaur Discovery Museum in Kenosha has more than 20 carnivorous dinosaurs on display and tells the story of how non-avian, theropod dinosaurs like Tyrannosaurus rex and Allosaurus gave rise to the avian dinosaurs, AKA the birds.

A family of bronze hadrosaurs in Dinosaur Plaza greets visitors to the Fernbank Museum in Atlanta. Enter the Great Hall and marvel at the Giants of the Mesozoic exhibit recreating an incredible scene in the prehistoric badlands of Patagonia, Argentina. One of the largest dinosaurs ever discovered, Argentinosaurus, defends itself from an attacking Giganotosaurus, while a flock of 21 Pterodaustro and three Anhanguera scatter overhead in reaction to the commotion. The Dinosaur Gallery also features murals, life-sized models, and other displays that show what life was like in Georgia during the Mesozoic Era. 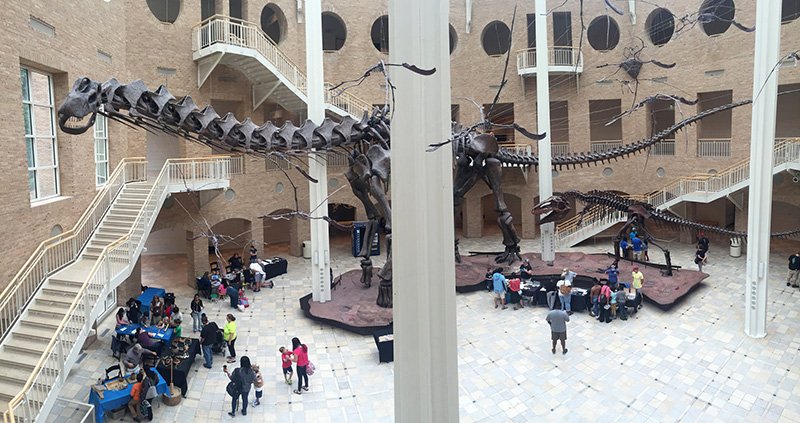 “Giants of the Mesozoic” by albedo20 is licensed under CC BY-NC-ND 2.0

Nearby Stone Mountain Park has a Dinosaur Explore attraction with 20 animatronic dinosaurs including favourites like Tyrannosaurus rex, Brachiosaurus, Triceratops, and Allosaurus. Meet a T. rex, play in the dino dig, visit the Dino Nursery in the Dinotorium, or become a Junior Dino Ranger!

Have you visited any of these dino-riffic locations?
Let us know what you thought!