As far as hubby and the kids are concerned, no holiday gift guide would ever be complete without a selection of Star Wars toys. Hubby still gets Star Wars figures for Christmas every year, and the kids have inherited his love for the 38-year-old franchise. This year in particular demands a Star Wars mini toy guide! We’re all excited for the release of Episode VII: The Force Awakens (some of us more than others), and hubby has our tickets ready for opening night. In celebration, here’s a look at the coolest Star Wars toys from Hasbro this holiday season, just in time for the event of the year! 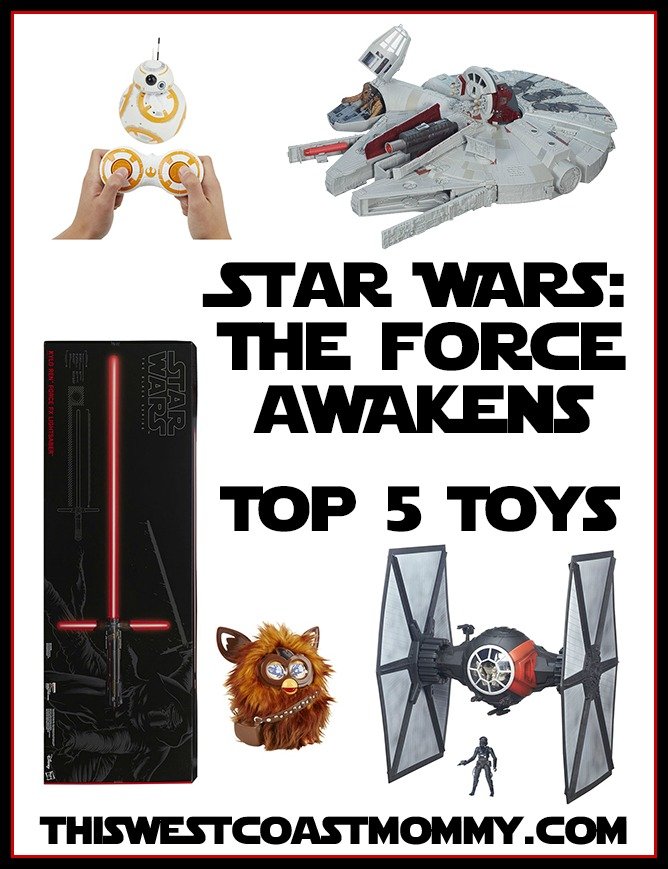 Imagine recreating epic battles from Star Wars: The Force Awakens with this Battle Action Millennium Falcon vehicle! Trust me, this is the ultimate toy for any young Star Wars fan. It’s an impressive size yet still light enough for the kids to fly around. It comes with lots of play features like a pop-up Nerf cannon, pop-up gun turrets, secret storage compartments, and cool light up and sound effects (requires 2 AA batteries). There’s even a switch on the bottom that automatically triggers take off sounds when you lift the ship off the ground. 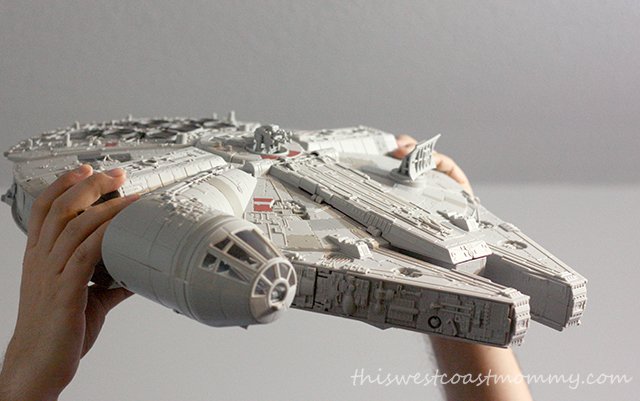 The top panel lifts off and transforms into a playset for your standard size 3.75″ Star Wars figures. The Millenium Falcon comes with Chewbacca, Finn, and BB-8, and the figures fit nicely into both the cockpit and the playset. 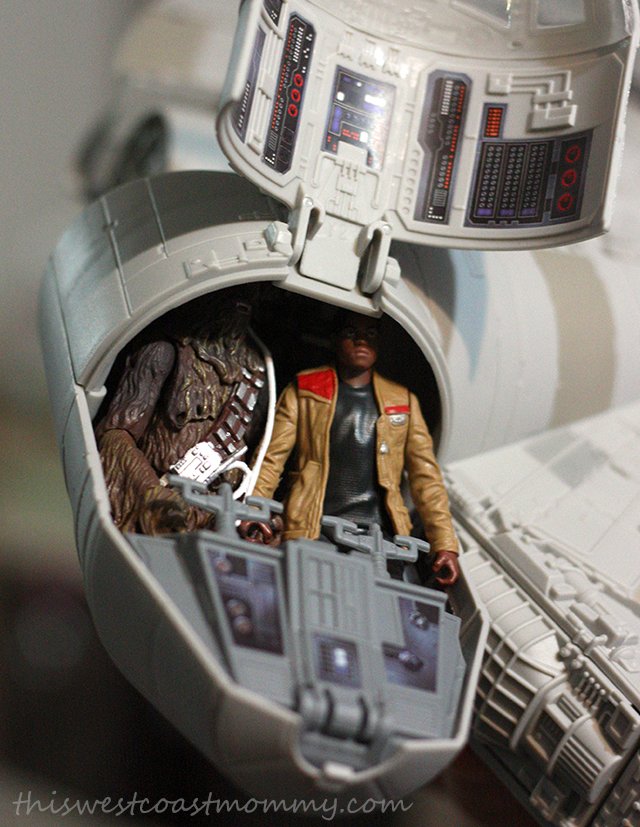 For those who are sticklers for these kinds of things, this version has a rectangular radar dish to make it accurate to The Force Awakens movie (the round radar dish having been broken off in Return of the Jedi).

BB-8 is the spherical, loyal Astromech Droid of the Resistance pilot Poe Dameron, and this season’s most popular toy! The Star Wars: The Force Awaken Remote Control BB-8 figure rolls in any direction and makes expressive droid sounds as you direct him to your next adventure with the remote.

Give him a shake to wake him up, and his ingratiating whistles and chirps invite everyone to play. BB-8 rolls in whatever direction he’s looking. One pad on the remote control moves him forwards and backwards, and the other turns his head. BB-8 himself takes 4 AA batteries, and the remote needs 2 AAA batteries (not included). 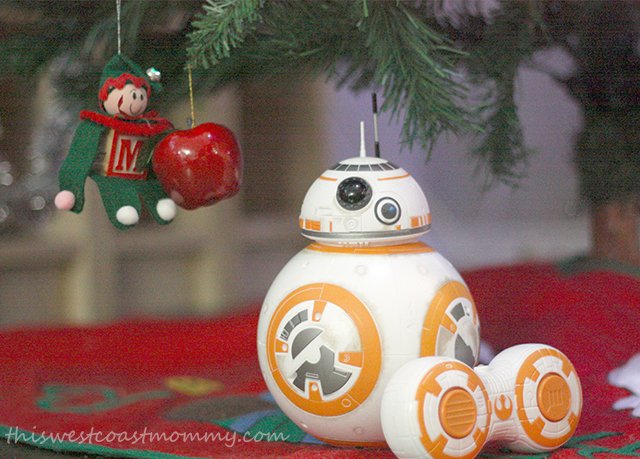 My girls, Tee in particular, have been enamoured with BB-8 (or Snowman Droid, as Tee has dubbed him) since their first glimpse of this cute robot. I know they will be over the moon to discover this little guy under the tree this year!

Re-create the biggest battles and missions in the Star Wars saga with Black Series Titanium vehicles. With exacting attention to detail, vehicles in this series set the standard for quality and realism that Star Wars fans expect. This First Order Special Forces TIE Fighter vehicle is crafted to show true-to-story detail, and it comes with a display stand that features a simulated hovering effect. The elite of the First Order starfighter pilots have access to specialized craft, including two-seater TIE craft outfitted with enhanced weapons and sensor systems. No collection — or adventure — is complete without this Black Series Titanium vehicle. 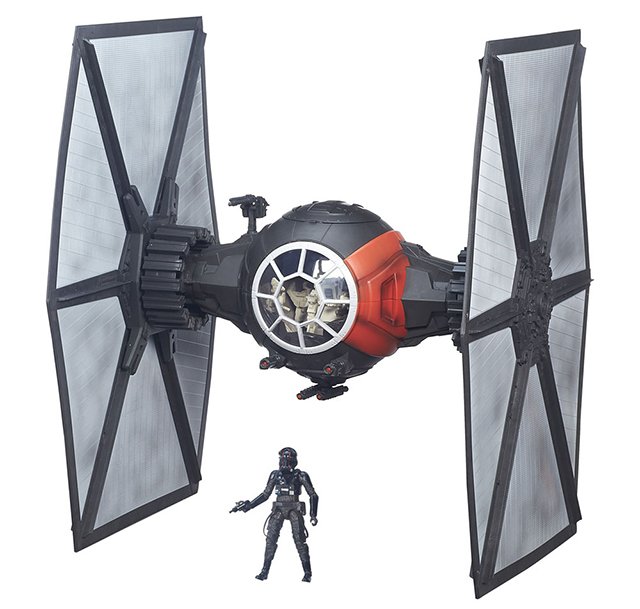 Recreate the biggest battles and missions in Star Wars with this role-play toy from The Black Series! This series brings exquisite features and decoration, providing the quality and realism needed by every true devotee of Star Wars. Feel like the real Kylo Ren with this Force FX Lightsaber, featuring classic light and sound effects, and real metal hilt. A dark warrior strong with the Force, Kylo Ren commands First Order missions with a temper as fiery as his unconventional lightsaber. Imagine the thrill of a heated battle with this lightsaber by your side. 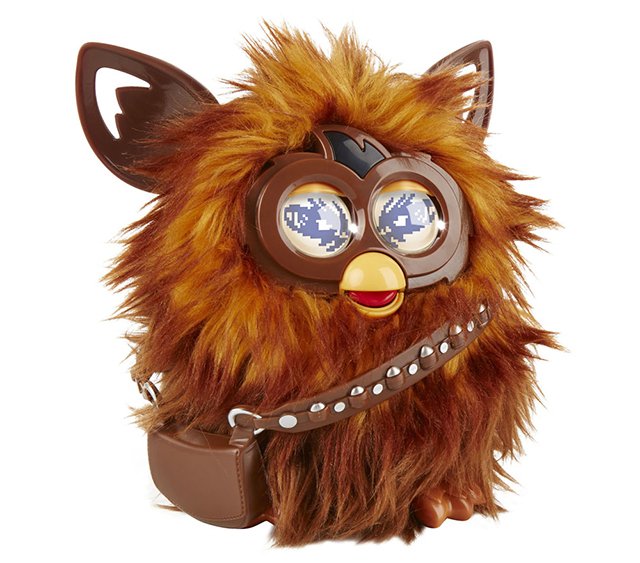 Do you have a Star Wars fan in the family too? Which toy would you love to surprise them with this Christmas?

Disclosure: I received sample items for review. All opinions expressed are completely honest and my own, based on my personal experience.Your experience may differ. This post contains affiliate links. This West Coast Mommy is a participant in the Amazon Services LLC Associates Program, an affiliate advertising program designed to provide a means for sites to earn advertising fees by advertising and linking to Amazon.com. I will receive a small commission if you purchase through my link, at no additional cost to you. This income helps pay for the operating costs of my website – thank you for your support!