This weekend was pretty windy around here! A major windstorm hit the south coast of BC and down into Washington state on Saturday, resulting in downed trees everywhere and almost half a million customers in BC without electricity at some point. Many people, us included, lost power for two days and some change. Even now as of early morning Tuesday, there are still some homes waiting for power.

But have you ever noticed that whenever something goes wrong, like the power outages during and after this storm, there are always people who take to social media to express their displeasure? Sometimes it’s warranted, and sometimes it just comes off as a little out of touch with the realities of the situation.

It’s all a conspiracy, man…

Lots of people want BC Hydro to reimburse them for spoiled food. Never mind that it was the storm that knocked down all the trees and power lines, and never mind about buying some ice, making an insurance claim, or renting a generator.

Some of those people didn’t realize that the E in ETA stands for estimated.

This poor woman had to leave her birthday cake at her friend’s house. I bet you her friend ate it all as soon as she walked out the door. (Also, candles. Buy some.) 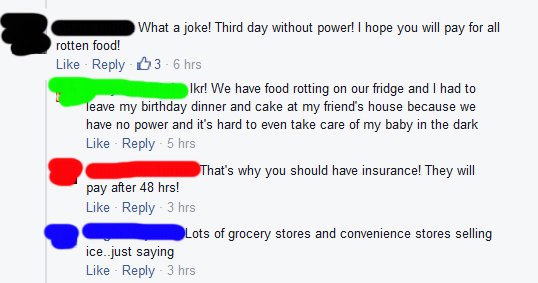 Some people have strange houses.

And this guy wanted BC Hydro to help him get his internet hooked up too. Maybe on a break between fixing power lines?

Some people are never satisfied. This guy was upset to discover that the store he wanted to shop at had power.

Somebody actually compared our windstorm to Hurricane Katrina! You know, the hurricane that killed over 1830 people, resulted in 108 billion dollars of damage, and displaced over one million people from their homes.