Every new Star Wars movie is an event in our house. We all go as a family to the theatre on opening night, and then when it comes out on Blu-ray we have another movie night at home with popcorn and watch all the bonus features. The kids (and us of course!) were super excited to get this on the Blu-ray player as soon as our copy of Solo: A Star Wars Story arrived. 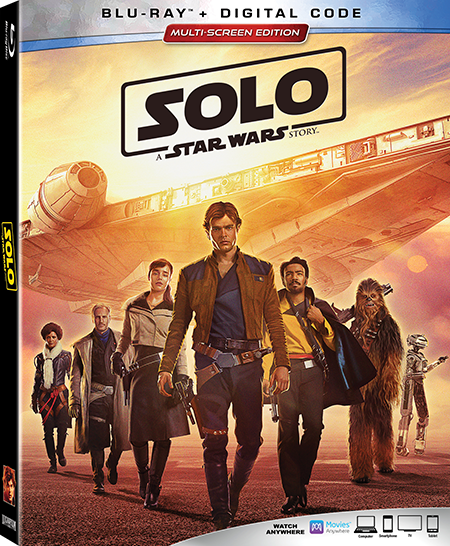 Solo: A Star Wars Story is available digitally in HD and 4K Ultra HD, Movies Anywhere; or bring the adventure home on Blu-ray 4k Ultra HD, Blu-ray, DVD, and On Demand on September 25.

Pick up your copy of Solo: A Star Wars Story on Amazon!

Ever wondered about Han’s back story? Where did he grow up? How did he and Chewie come to be friends and partners? How did Han win the Millennium Falcon?

Solo: A Star Wars Story introduces us to Han before Luke and Obi Wan meet him in the Cantina and hire him to take them to Alderaan. Follow Han Solo (Alden Ehrenreich) as he escapes from his home planet of Corellia, leaving behind his best friend and lover Q’ira (Emilia Clarke), then as he meets Chewbacca for the first time, joins up with a crew of outlaws led by pragmatic Beckett (Woody Harrelson), meets a younger Lando Calrissian (Donald Glover), makes that iconic Kessel run, and unintentionally helps start the Rebellion.

We all thoroughly enjoyed the movie, and I was impressed at how good Tee was at spotting the dozens of references to other Star Wars movies. The leader of Han’s new crew, Beckett, is wearing the same disguise that Lando Calrissian uses in Return of the Jedi to sneak into Jabba’s Palace. Beckett and Chewbacca play the same 3D holo-chess game aboard the Millennium Falcon that R2-D2 and Chewie play in A New Hope. And we finally have an explanation for Han making the Kessel run in less than twelve parsecs (this has been a longstanding nitpick for many fans who know that parsecs are a measure of distance not time).

Solo is an entertaining action adventure flick the whole family will enjoy. For me, Harrison Ford is the one and only Han, but Alden Ehrenreich does a credible job. There were definitely moments where I really believed Ehrenreich as a young Han Solo, but it was Donald Glover’s portrayal of Lando in all his charm and swagger that really convinced me. When it comes to droid characters, Lando’s acerbic co-pilot L3 (short for L3-37) is my new favourite (sorry BB-8). Watch for a cameo by Warwick Davis who also played Wicket in Return of the Jedi and multiple background characters in The Force Awakens and The Phantom Menace.

Solo: A Star Wars Story bonus content takes fans behind the scenes to experience compelling discussions with the star-studded cast and screenwriters Jonathan Kasdan & Lawrence Kasdan; a revealing feature on Chewie and his enduring friendship with Han; a close-up look at the original version of the Millennium Falcon and Han’s first time piloting the infamous ship; the creation of the film’s otherworldly settings and pulse-pounding action sequences; and eight never-before-seen deleted and extended scenes.

Hey Star Wars fans, we’ve got a couple of awesome print out and fold paper models for you! Click on the button below to download the printables and instructions to make your own Chewbacca and Millennium Falcon. All you’ll need is cardstock, a printer, scissors, and a glue stick. 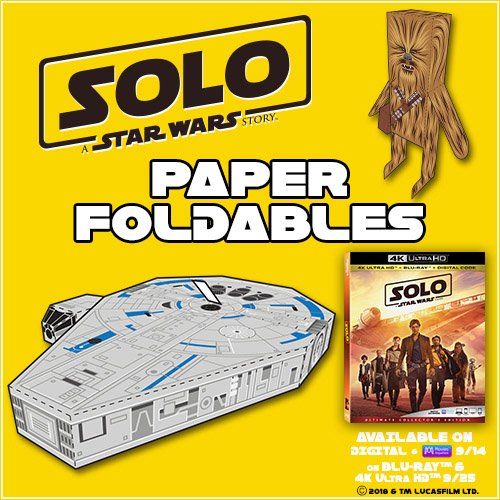 Print out the pages on cardstock using your colour printer, cut out the pieces along the solid lines, and follow the simple directions to fold and glue everything together.

I’ve got a copy of Solo: A Star Wars Story to give away to one lucky reader. Enter in the giveaway widget below. This giveaway is open to residents of Canada and the U.S., 18+. All the winner’s entries will be verified.