Like the box says, Shuriken School is where ninjas rule!

I sort of remember seeing bits and pieces of this cartoon when it aired on YTV a few years ago, but I never watched a whole episode. Luckily, for the first time ever in North America, all 26 episodes of Shuriken School are now available digitally and in a 4 disc DVD set. 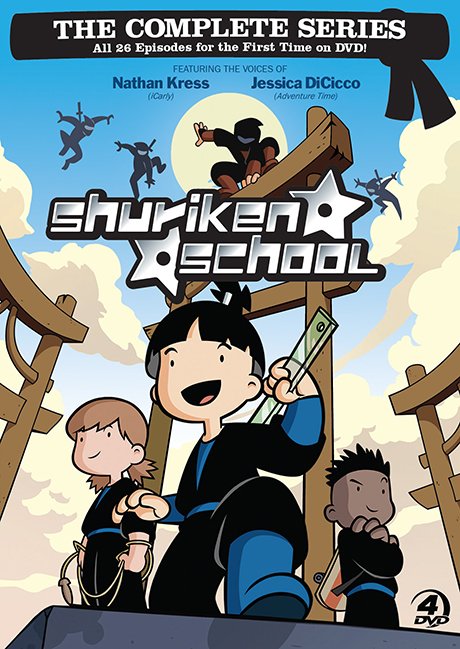 “SHURIKEN SCHOOL follows the extraordinary adventures of 10-year-old Eizan Kaburagi, the last descendent of the greatest ninja to ever exist, and his friends during their first year at a ninja school. Lessons take on a new dimension as the kids are shown how to melt in to the walls, disappear into a cloud of smoke and fly over rooftops! Teaching methods are unorthodox and anything can happen, as absurd as it might seem. Get caught up in the action as Eizan and his eccentric classmates perfect their ninja skills in all 26 adventurous episodes!”

Tee’s been really interested in ninjas lately, so I thought she’d find this show interesting. This anime style cartoon might be a little different from what we’re used to here in North America, but it will be familiar to viewers of Sailor Moon. Shuriken School was originally released in French, but the English dubbing is done quite well with some recognizable voices like Nathan Kress (iCarly), Jessica DiCicco (The Emperor’s New School, Adventure Time), and Kimberly Brooks (Doc McStuffins).

I was a little worried that there would be a lot of fighting which Tee would then try to imitate, but there’s less than I thought there would be. For a show ostensibly about martial arts, the principal themes running through each episode have more to do with friendship and teamwork. I would say that four years old seems to be on the low end of the age range appropriate for this show. There’s a lot of dialogue, and I think older kids would get more out of it.

Pick up your copy at Amazon.com