Editor’s note: We believe that all birth stories and all birth experiences matter. This post is part of our ongoing series of birth stories featuring a diverse range of women and their birth experiences. Today’s birth story contains twins, a foreign country, medical students, and prawns. Follow Shellie and her twins, Bessie and Griff, on Instagram as they live the Spanish life in Valencia!

Babies are treated like royalty in Spain. Everyone loves them. From the grandmas nattering on the corner to the cheese seller in the market. Everyone wants a look and a squeeze. And to offer advice. So when they told me at 8 weeks pregnant, I was carrying twins, I knew I would be giving birth in a country that would make such a fuss of them.

We were told very casually about the twin thing. I expected a Hollywood style, “Are you ready for some world changing news?” but no. “There’s two,” she said matter of factly as she looked for a heartbeat. Of course there are, I thought. Mine and the baby’s. 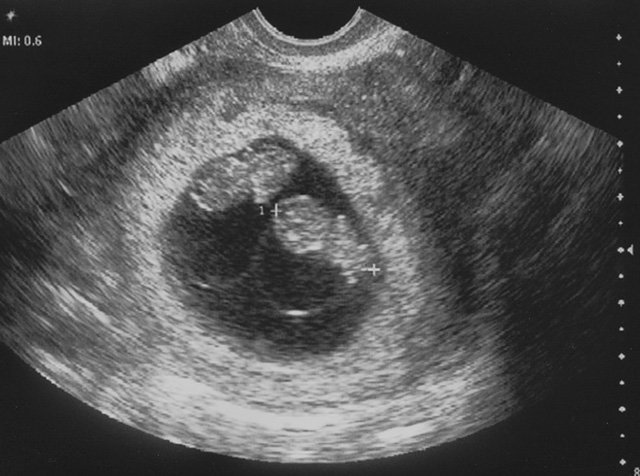 “Twins” by Matt Kowalczyk is licensed under CC BY-NC 2.0

Then the penny dropped. And it dropped very loudly. I laughed hysterically as my boyfriend’s face turned a funny colour. We left the appointment in a bit of a blur, slightly confuddled. We had thought the appointment was only for a blood test; it was only week 8. We sat having a coffee (in a car park, but that’s another story) and suddenly found the joke about the Mexican fireman hilarious.

What did the Mexican fireman call his twins?
Jose and Hose B.

Oh how we laughed. Plus it gave us a nickname for the bump. The firemen or los bomberos.

My pregnancy went really well. I loved it. The state health system here is phenomenal, and I felt supported throughout. I was scanned every three weeks by my specialist. They do a few things differently but as it was my first pregnancy, I had nothing to compare it to. There are a lot more scans, less ante-natal support and no home visits.

My specialist told me he wanted me to get to 36 weeks. I wanted to get to 36 weeks. He was the oldest man I’d ever met, and we could barely understand him. We have a good level of Spanish and even after self-teaching a lot of new pregnancy-related vocabulary you don’t learn in Spanish class, we still struggled. As did the native nurses. I think even if we’d been speaking the same language, we would have still left each appointment slightly puzzled as to what exactly was going on. They only confirmed at week 34 that the twins were sharing a placenta, they could never quite see clearly enough to know. I’m so glad I only discovered this towards the end as I would have been lost down a well of worry about twin-to-twin transfusion syndrome. In fact, I barely googled anything during my pregnancy. Anything to keep my usually worried mind calm.

So 36 weeks arrived, and the specialist booked me in for an induction. He told me I was big enough (and I was huge, as were my feet) and the twins were big enough, so I had to come in on Sunday morning. “No rush,” he told me. “Have a nice breakfast first.” They know their priorities here.

We got the bus to the hospital on a 40 Celsius August day. (My decision. I’m a socialist to the end.) We arrived with our suitcases and were given a room to ourselves. It contained two beds, but we were the only ones in there. After the confusion as to why we had brought so much stuff (¿Estás de vacaciones?) they induced me with a pill up inside me and told me to go and relax. So we did exactly that. We enjoyed the air conditioner in the room, had kebabs, watched an episode of RuPaul, had a nap. It was all a bit like being in a two-star hotel. We forgot why we were there if I’m honest. Until it all kicked in properly about midnight. and then it really did kick in.

I tried using the hypnobirthing techniques I’d learned, but Christ!, it went from nothing to everything. So when my lovely young team of midwives asked what they could do to manage my pain. I asked for an epidural, expecting to be told to wait. “No worries,” they told me, and the anaesthetist was there within 15 minutes. Spain has a very open attitude about drugs it transpired. So for the next 14 hours, I gave it my very best go.

I kept falling asleep with exhaustion. Apparently, I snored between each contraction, kept saying “please” and “thank you “to everyone, asked politely in the Spanish formal tense for the vomiting bowl when the gas and air made me feel sick, until gradually one part of me wasn’t numb like the rest. Waiting for the anaesthetist to return, which happened at the same time as the midwife team handover meeting, was the toughest hour. I was in agony. All while the drugs kept making me think I was fighting Germany. (The country as a concept, not the people.) By noon, I was 8 centimeters dilated, I’d had 2 epidurals and I was utterly shattered.

The OB-GYN came to talk me through my options. They were going to prep me for a c-section in the operating theatre but try everything they could before they got to that stage. I desperately didn’t want a c-section as your partner isn’t allowed with you in the room in Spain. It’s a bit of a sticking point for many as according to EU law, you are allowed your partner with you. But they just won’t budge on it here, which is surprising as they don’t tend to be rule followers.

I couldn’t bear the thought of my boyfriend pacing the corridor outside and me being alone for this momentous event. My midwife had my back and made it clear they would all do everything they could to help me have the twins vaginally. They then wheeled me into the operating theatre, my partner scrubbed up and about 15 medical students arrived to watch and learn about a twin birth. They looked so young I thought they’d gotten lost on their way to a post-GCSE holiday in Benidorm. I was surrounded by a sea of green-clothed people, and I felt like I was on the outside watching it all.

Luis my OB-GYN was incredible. With the help of a vacuum, he got both twins out vaginally. My midwife Paz was shouting, “¡Fuerte en el culo!” at me (Power in your arse!) and everyone else was using any old words of English they knew to help me along. The girl twin, Bessie, came out screaming her little head off, but my son, Griff, came out silent 7 minutes later which was petrifying. He was whisked away and after a few horrible minutes, a nurse shuffled in and spoke to Luis (who had his head between my legs trying to remove my frankly enormous placenta). Luis looked up at me, his face mask speckled with my blood, peered over the sheet, winked and said, “Your boy is doing just fine.” What an absolute legend. 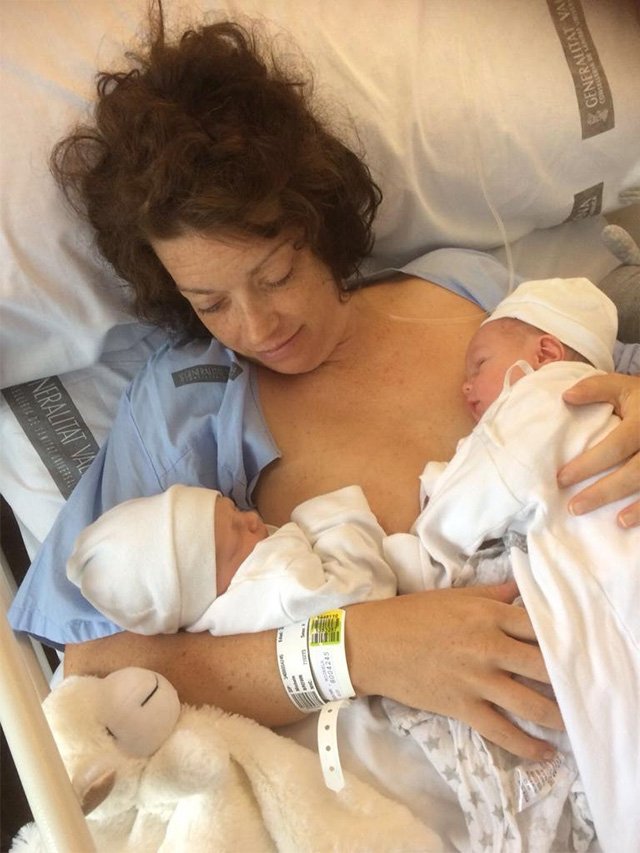 The only time I shouted (and I mean a teacher rollicking) was when they took my girl to be checked. The midwife pierces a girl’s ears here after the birth, but I didn’t want my 10-minute old baby to look like she’d popped into Claire’s Accessories. They cleaned me up, whacked the kids on my bare chest and took me back to my room. Now because this is Spain, the maternity ward is not near the labour ward. Consequently, I was wheeled over the road (through a tunnel thankfully) all the while everyone was having a good gawp at the top-naked gringo and her twins.

Finally, to seal the deal on a pretty memorable day, we arrived back to our room to see that a Chinese family have been moved in with their new baby. That’s fine, I’m more than happy to share. That is until a visitor arrived to see them with a wok, camping stove and Tupperware. I was trying to do my first post-birth wee into a commode as he began to stir fry giant prawns at the end of my bed.

It has put me off Kung Po prawns for life. 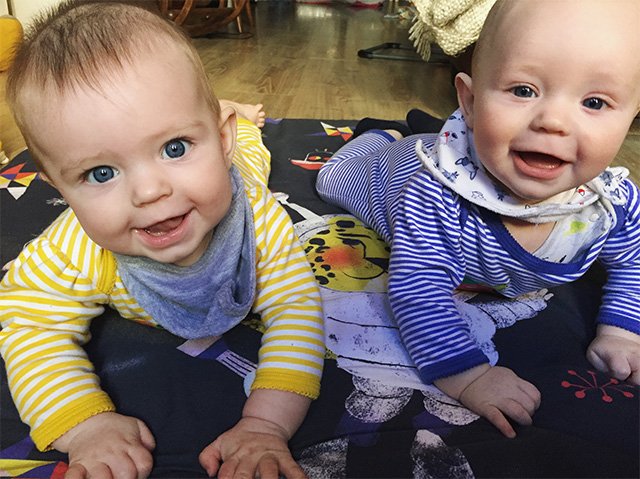