Editor’s note: We believe that all birth stories and all birth experiences matter. This post is part of our ongoing series of birth stories featuring a diverse range of women and their birth experiences. Shannon wanted a “gentle” c-section for her second baby, and she got it! Check out her story and the incredible photos her doula captured of Shannon’s c-section in progress.

On June 20, 2017, we welcomed our second and last daughter into the world. 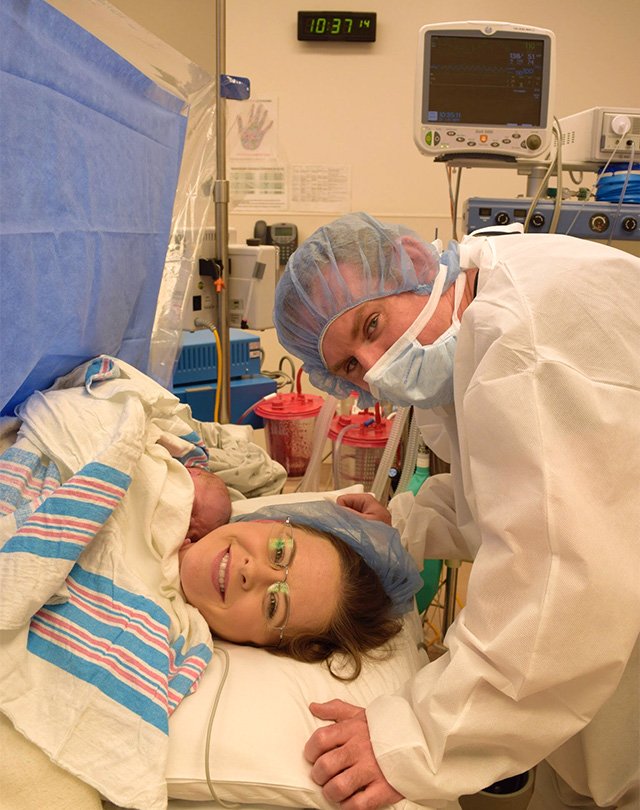 I did so with a little bit of fear and nervousness about my planned gentle c-section. This c-section was to be my second one due to having fibroid removal surgery prior to any pregnancy. The surgery significantly damaged the fundus of my uterus so having a vaginal birth was medically not an option.

I advocated for myself and made phone calls and demands to make sure I got the procedure I wanted. With much planning and determination, I was able to get the gentle c-section I wanted and missed out on with my first.

On Tuesday morning, we arrived at the hospital 2 hours before my scheduled 8:30 c-section. I had already called the nursing manager and let her know that my OB consented to having both my doula and my husband in the delivery room. There was some push back, but I was determined to have both. We waited for almost an hour in the waiting area before being brought back to the the triage area. I wore my Blessingway necklace and lit my battery operated candle for positive vibes during my surgery.

At first they were reluctant to let my doula back with us. My husband was there to support me, and they started all their standard tests. I was able to speak to the anesthesiologist about my previous c-section and the issues I had so we made a game plan for how to keep me alert and vomit-free.

Due to my previous history and known clotting disorders, additional tests were requested by the anesthesiologist so surgery was delayed by like 1.5 hours. The one nice thing about this was it let everyone on the surgical team have time to read over my birth plan and ask me any specific questions they had. It also gave me and my husband time to just enjoy ourselves and not feel rushed.

Game time! This time around, I was able to walk to the ER. I totally forgot to bring my music, but in the long run I actually preferred it since I got to hear my baby’s first noises very clearly. They did my local anesthesia and then put the catheter in. My doctor came in and started prepping the incision site. At this time my husband was standing by the door into the OR and the doctor yelled at him to sit down out of eye sight instead. This really bugged my husband, but the doctor told me later that it was because there were certain things my family members shouldn’t see.

After a few minutes of the doctor doing his thing, my husband and doula were allowed in. Since my arms weren’t tied down, my husband was able to freely hold my hand and sit right next to my head. My doula was able to take pictures. At this point I had to ask if they had already started since there wasn’t a lot of talk between the doctor and his assistant (which I appreciated).

And then the big moment. They dropped the blue drape, and my husband was able to hold up my head. At this point none of my daughter had been taken out of the womb. I was able to see her head taken out, and the doctor told his assistant that they would be doing it slowly just like I requested. She started crying while halfway still inside!! She was gently pulled out which was super important to me. Once completely out, the doctor placed her right up against the clear drape and even said, “Hi, Mommy!” 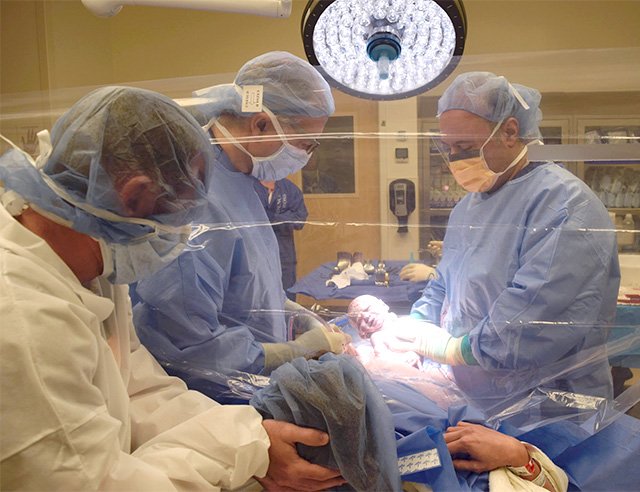 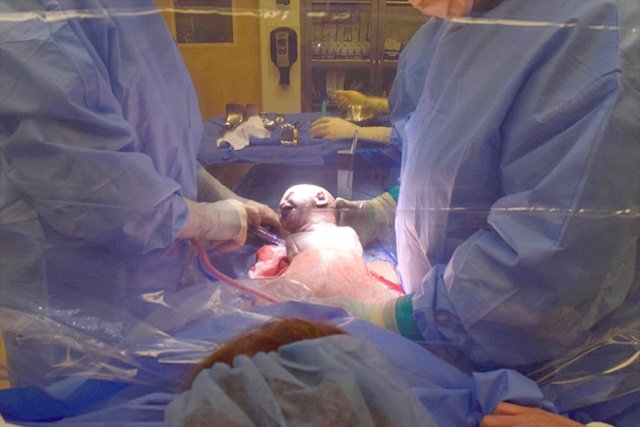 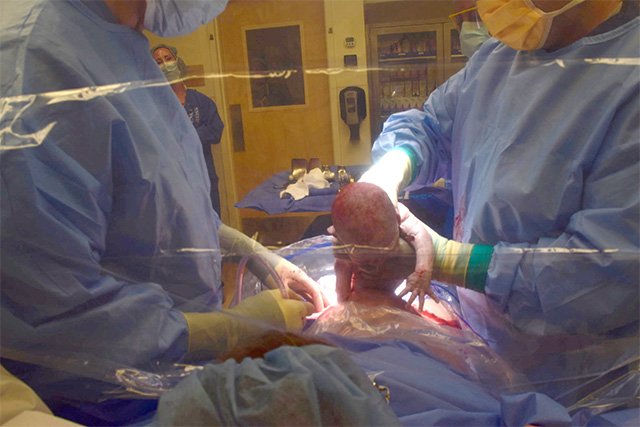 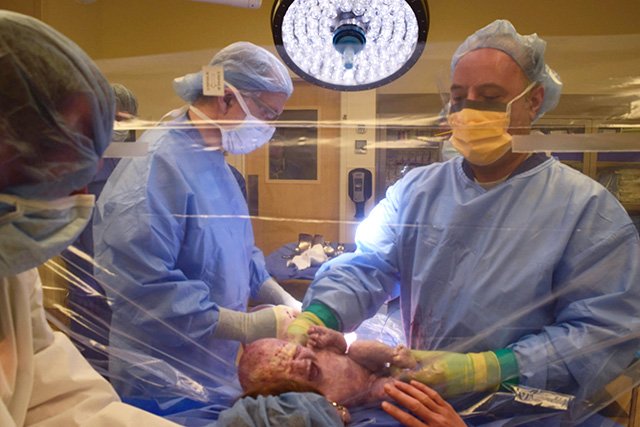 She was then placed in between my legs to have 60 seconds of delayed cord clamping. The doctor even explained to me that they couldn’t raise her up for me to see since they wanted as much blood from the cord to go to her. After 60 seconds, I got to watch them cut the cord! She was taken to the warmer to be assessed and have dad cut the cord.

They asked me if I wanted her in a diaper or if I wanted the vernix rubbed off, to both I said no. I wanted her naked and the vernix left on. I was able to do skin on skin for a few minutes which was amazing. Totally different from my first birth (at a different hospital) where I barely got to kiss my eldest daughter before they took her. 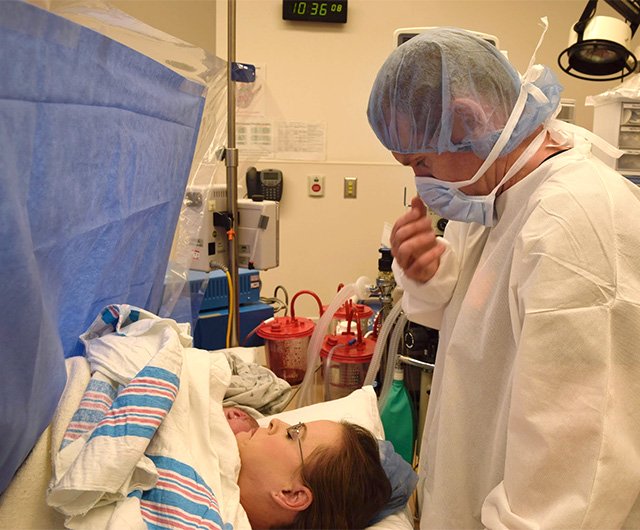 Luckily, up until this point of the surgery I had felt great. But due to the amount of fibroids I have plus scar tissue from my previous c-section and myomectomy (fibroid removal surgery), I started vomiting and moving too much which was becoming a safety issue. We all quickly agreed that putting me under was the best choice. I felt physically horrible, and baby was taken with dad and my doula (who by the way got amazing photos). Dad did skin on skin while I was in surgery, and my doula sent me text updates to my phone so I could have them post-op. Baby ended up going under the warmer since she couldn’t maintain her body temperature despite skin to skin.

When my surgery was finally over, I was taken into recovery to be with my baby! I was still vomiting and not doing great, and she had to be under the warmer for a little while longer while they attended to me. Once I was stable enough, they brought her over and we got to do skin on skin and she nursed for the first time!

All in all my “big” baby’s birth was so so so much more then my first regular c-section. It really taught me that if you advocate for yourself, it really can pay off in the end.