Public Shaming is Not a Parenting Tool | This West Coast Mommy 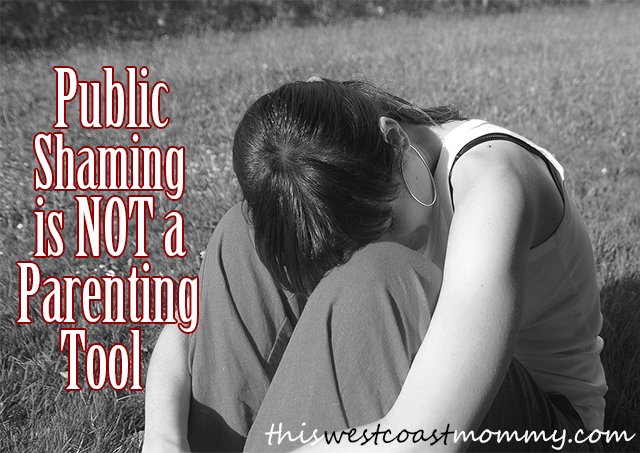 We’ve all seen the pictures, the videos, the Facebook posts where parents brag about publicly shaming their kids as a method of discipline. You know, stories about teenagers forced to stand on the side of a busy road wearing a sign proclaiming, “I’m a thief, ” or, “I lie to my parents.” Horrific enough I think, but then when these images are shared on social media, they grow beyond the small group of people driving by that young person. Now everybody knows, including neighbours, classmates (some of whom will be more than happy to keep up the torment once you’re done, possibly for years), and even future employers.

And then there are the YouTube videos. What is with this trend of shaving your child’s hair off as punishment and posting their humiliation on social media? Forced head shaving has been used for centuries as a way to demean, degrade, and punish convicts, prisoners of war, collaborators, and social outcasts, particularly women. That’s not how we should be treating our children.

This post has been on my mind for a long time. Two weeks ago, a 13-year-old girl jumped off an overpass after her father released a 15-second video of her standing next to a pile of her chopped off hair as punishment for getting “messed up”. The story went viral last weekend, and this is what prompted me to finally put my thoughts down on paper (or on the screen). I may be a little late to the party, but that’s okay. I need to take my time and consider the issues carefully before I write about them.

In this most recent situation, nobody can say whether her father’s video was the direct cause of this girl’s tragic decision to kill herself, but it would be very naive to imagine it wasn’t a part of it. Of course this father didn’t want her to end her life. I’m sure he never even considered that this could be the outcome. I’m sure he really thought that this might “shame her straight”. This father is suffering the worst pain a parent can feel, and I wouldn’t wish it on my worst enemy.

You might think that as a blogger I wouldn’t have a problem with sharing stories and pictures of my kids. But here’s the thing. I share their high points. I show off cute pics of my kids loving on each other or falling asleep in funny places. I share their achievements and successes. But I don’t share their disappointments, their problems, their embarrassing moments. Those are private, as they should be. As parents, our job is to protect our kids from humiliation, not dish it out.

All the “likes” and thumbs up and virtual high-fives on these public shaming posts help create the impression that this is just another way of disciplining your child, just another parenting tool. After all, it’s about teaching them right from wrong, at any cost, right? Not quite. When you do this to your child, you’re also teaching her that misusing your authority over those in your care to hurt and humiliate is not only okay but laudable. You’re teaching her that home is not a soft place to land. You’re teaching her that her mistakes will follow her throughout her life, because you documented and shared them.

Public shaming damages the relationship between parent and child. So many of our kids get bullied, shamed, and humiliated at school or in their peer groups. Why would we deliberately add to that burden? How long does it take a child to get over knowing (and seeing constant reminders on Facebook) that the person who is most supposed to love and protect her has deliberately humiliated her to cause her pain? Does that seem like a loving gesture?

Not to mention, posting something online is forever. Even if you delete it after the fact, people take screen shots and web crawlers archive it. Once you put it out there, you’ve lost control over it. Do we really want to saddle our children with their mistakes or youthful indiscretions forever?

Look, I’m a parent too. I understand feeling frustrated, lost, like I’m out of options. When we get to that point (and we all do at some time or another), ask for help. There is no evidence that humiliating punishments work in the long-term (and plenty of evidence that it doesn’t), but we do know that these types of punishment can lead to anxiety, depression, and aggression. The end doesn’t justify the means. Locking a child up in the basement for a few months would probably keep her in line too, but I hope nobody’s recommending that as a valid parenting tool. There are things that parents just should not do, regardless of what they think they can accomplish by doing it.

Some people might argue that by writing this I’m publicly shaming the parents who have posted these images and videos. If it’s not okay to shame a child, why is it okay to shame the parent? I would respond by saying that I have a duty of care and the obligation to protect my children, which is why I wouldn’t humiliate them in private or in public. I don’t owe that to an adult stranger who has deliberately made their actions public.  When someone publicizes their own behaviour on social media, I think it’s reasonable to assume that the floor is now open for discussion.

This is a conversation that needs to happen. When this type of shaming “discipline” starts to become an acceptable parenting tool, it’s a problem that needs to be talked about. Actions have consequences, and any parent who’s considering this needs to know the possible consequences of their actions. There are other ways, other strategies. Public shaming shouldn’t be an option.