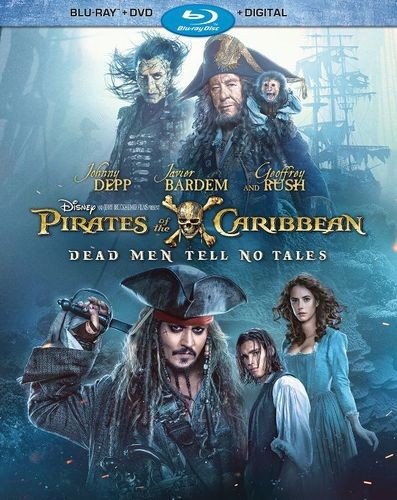 Ahoy, mateys! The fifth installment of the Pirates of the Caribbean series is now available to watch at home on Digital in HD, 4K Ultra HD, 4K Ultra HD/Blu-ray, Blu-ray/DVD/Digital, DVD, and On-Demand.

“Pirates of the Caribbean: Dead Men Tell No Tales is a rollicking new tale of the high seas, infused with all the elements of fantasy, humor and action that have resulted in an international phenomenon for the past 13 years. The rip-roaring adventure—packed with humor, suspense and jaw-dropping special effects—finds down-on-his-luck Captain Jack feeling the winds of ill fortune blowing strongly his way when deadly ghost sailors, led by the terrifying Captain Salazar, escape from the Devil’s Triangle bent on killing every pirate at sea—notably Jack.”

I enjoyed the first two swashbuckling movies, but I freely admit we never got around to seeing At World’s End (#3) or On Stranger Tides (#4). Fortunately, the newest film works just fine as a standalone movie. I’m sure there were some details I missed, but don’t feel like you must have watched the earlier installments to appreciate this one.

This was our Saturday night movie after the kids were tucked safely in bed. There’s a lot of violence and (non-gory) killing. Captain Salazar and his creepy pirate hunting crew of ghosts were too scary for my 5 and 7-year-olds – and as someone who grew up watching Jaws, those zombie sharks are pretty terrifying – but older kids 11+ should be okay.

I could say that the plot was convoluted and fantastically far-fetched, but isn’t that kind of what we expect from these movies? Captain Jack was, well, Captain Jack – campy, swaggering, and entertaining as always. The CGI effects were incredibly well-done and remarkably realistic: Captain Salazar (I read it took them close to a year to perfect the underwater movement of his hair), the ghost crew, the sharks. They did an especially spectacular job de-aging Johnny Depp as Young Jack Sparrow. Bottom line, Dead Men Tell No Tales was a thoroughly enjoyable watch.

Bonus material includes a collection of behind-the-scenes, making-of stories, including a conversation with directors Joachim Rønning and Espen Sandberg; a sit-down with the two young newcomers who play Henry and Carina; the secrets behind the menacing new villain, Salazar, and his ferocious ghost sharks; an on-set visit with Jack’s first mate from all five films; a chat with Sir Paul McCartney who appears as Uncle Jack; and a discussion about the franchise’s legacy; along with hilarious bloopers, deleted scenes and memories from producer Jerry Bruckheimer’s photo diary.

Pick up your copy of Pirates of the Caribbean: Dead Men Tell No Tales on Amazon.

I’ve got a copy of Pirates of the Caribbean: Dead Men Tell No Tales to give away to one lucky reader. Enter in the giveaway widget below. This giveaway is open to residents of Canada, 18+. All the winner’s entries will be verified.