It’s that time of year again! Canadian children’s book publisher Owlkids Books just released their 2017 spring catalogue, and our friends over at Owlkids kindly sent us some of their top new releases to review and share with you. Take a look at some of this season’s most engaging children’s books for kids aged 2-10, then scroll all the way down to enter to win this same collection for your own kiddos!

Bill Bowerbird and the Unbearable Beak-ache by Tyler Clark Burke 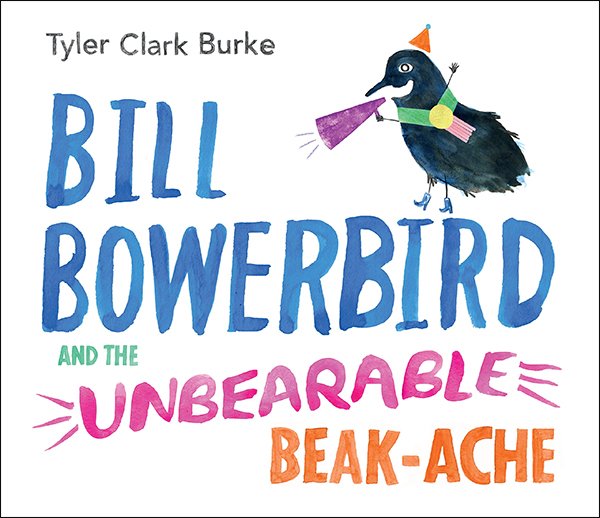 Bill Bowerbird wakes up one morning with a beak-ache. Desperate for relief, he visits all his animal friends hoping they can help. They give him all sorts of random items like a jar of honey, zebra’s stripes (?), a fly swatter, frozen carrot, keys, etc. – presumably a reference to bowerbirds’ habit of decorating their nests with shiny objects to attract a mate – but nothing seems to help. Dejected, poor Bill heads home in pain. Then all of a sudden he realizes his beak has stopped hurting. When he takes a look, he’s surprised to discover he has a new tooth!

The story is told in rhyming couplets and vibrant multimedia illustrations. The rhymes are fun to read out loud with the kids, but I had a hard time getting past the rather improbable depiction of a bowerbird with little stick arms and a tooth, both things that birds do not have. The other animals are recognizable, but even Kay was kind of skeptical when I explained the wingless black blob in blue cowboy boots was supposed to be a bird. (Suggested ages 4-7.)

Up! How Families Around the World Carry Their Little Ones by Susan Hughes 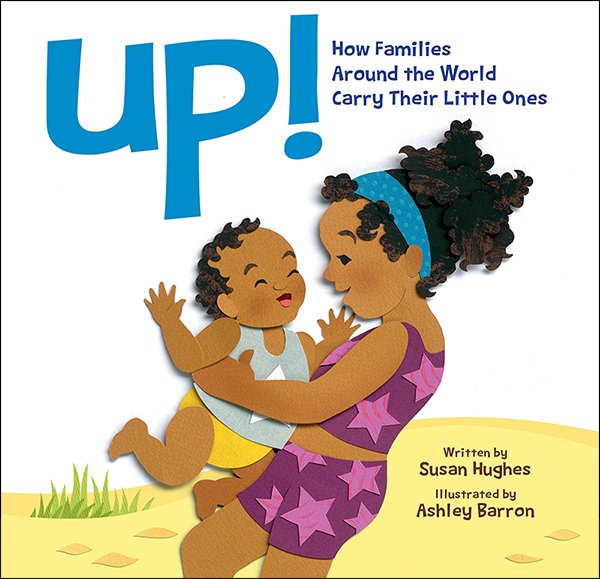 This picture book is aimed at toddlers, but as a babywearing, attachment-focused mom, I was also interested in its depiction of carrying and babywearing around the world.

Warm, colourful cut-paper illustrations show different ways of carrying babies and different family members, from Mother’s arms to Father’s baby carrier, and Auntie’s sling to Grandmother’s amauti (an Inuit parka with a built-in baby pouch just under the hood). There’s a small amount of descriptive text on each page along with the repetition of “upsy-daisy” that demands a little bump up when your toddler is sitting in your lap for story time. The overall message is one of inclusiveness and shows that caring for babies is not just a mother’s job, but one for the whole family. A great story for snuggling. (Suggested ages 2-6.) 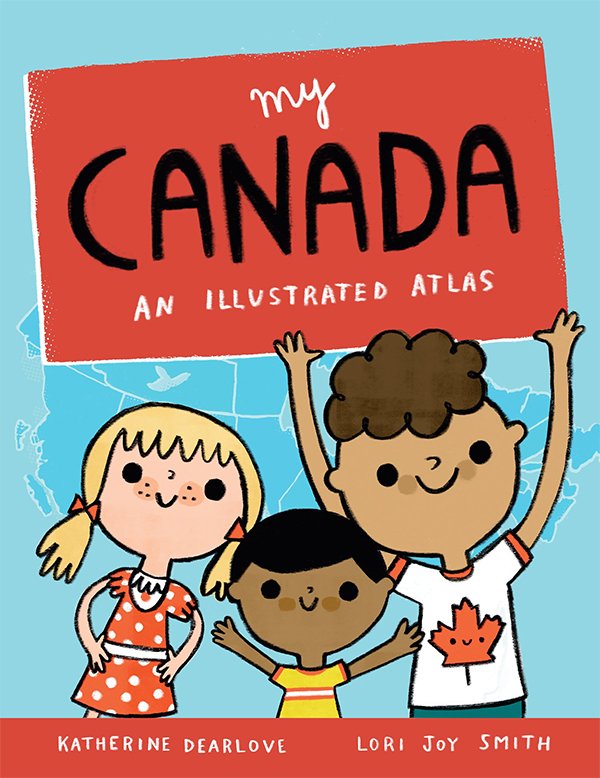 With Canada’s 150th birthday right around the corner, I was particularly looking forward to checking out this illustrated Canadian atlas. My kids have been making maps in school lately, and they’re fascinated with all the maps in this children’s reference book. Each province and territory has its own two page spread with hand drawn illustrations highlighting the capital city, other major cities, lakes and rivers, and landmarks.

It’s not just physical locations though. Each map also shows the provincial/territorial flag, bird, flower, and tree, as well as some of the wildlife native to that area of Canada (and at least one legendary creature – check out Ogopogo on the BC map below).

The illustrator, Lori Joy Smith, has created a free colouring page of Canada for kids to download! (Suggested ages 4-8.)

Phoebe Sounds It Out by Julie Zwillich 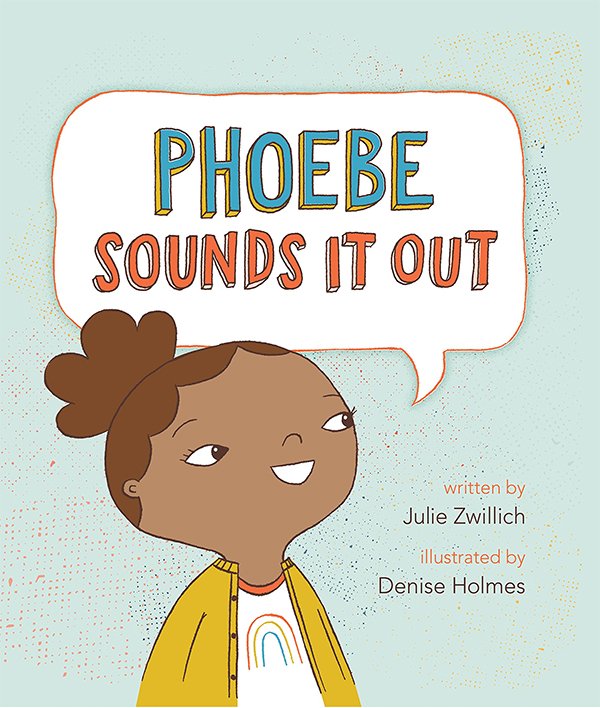 Phoebe and her classmates are learning how to write their names. When the teacher reminds them to “just sound it out,” Phoebe is understandably stumped. She studies the alphabet and attempts to write her name phonetically, ending up with slightly unusual results.

We’re currently in the middle of this right now with 4-year-old Kay. It’s fascinating seeing how she sounds words out and her funny spellings, so Tee finds Phoebe’s experience relatable. We like that this gentle story is accepting of mistakes and recognizes spelling and writing is a work in progress. It’s nice to see a diverse classroom as well, including children of different colours and another in a wheelchair. (Suggested ages 3-6.) 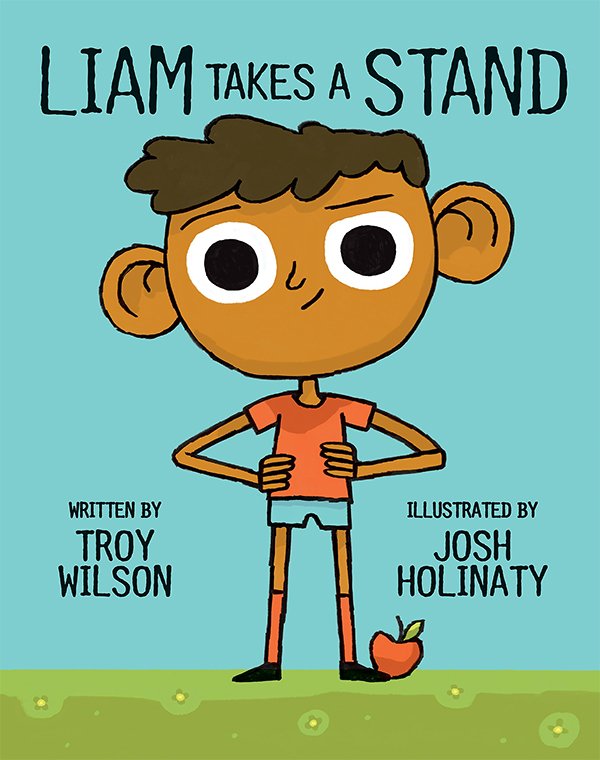 With two sisters in our house, we’re hardly strangers to sibling rivalry. Written from little brother Liam’s perspective, this picture book will appeal to all those younger sibs tired of being left out and ignored by their older brothers and sisters.

In Liam Takes a Stand (a cute play on words), Liam’s older brothers refuse to allow him to help with their lemonade stands. So Liam figures out how to beat his older brothers at their own game. Luckily for Lister and Lester, their little brother is more gracious in victory than they are. Like most little brothers, it turns out what Liam really wanted was just to spend time with them.

In addition to the sibling rivalry theme, this story also emphasizes the importance of hard work and entrepreneurship. Tee recently participated in an Entrepreneurial Fair at her school, so this story was a fun introduction to the idea of marketing and led to brainstorming ideas for Tee’s own business. (Suggested ages 4-7.)

Milo and Georgie by Bree Galbraith 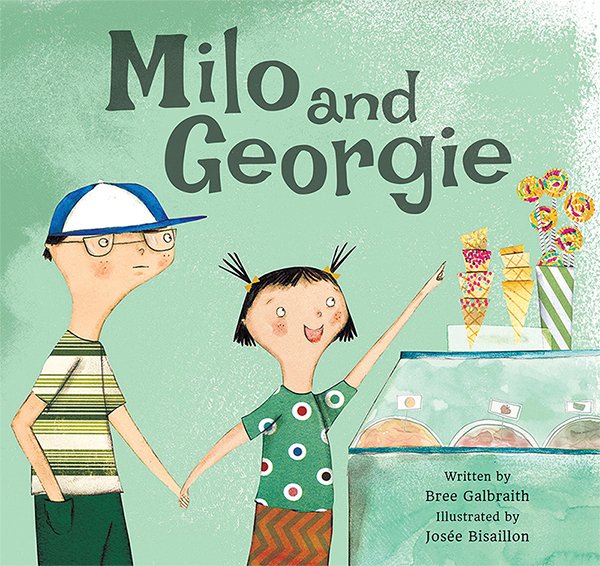 Milo and Georgie is about another sibling pair. When they have to move to a new city for mom’s new job, Milo declares he will never be happy again. Younger sister Georgie though, is looking forward to a new adventure.

Once they arrive in their new home, nothing is as Milo likes and he refuses to leave the house. I’m a little iffy on the babysitter who apparently sleeps the entire time she’s supposed to be caring for the kids, but while left to their own devices, Milo lets Georgie out to explore the neighbourhood tied to a piece of yarn. One day, she doesn’t come back and Milo is forced to leave the house to find her (the babysitter is still asleep!). He follows the string and along the way, he runs into all the new friends that Georgie has made. They all pitch in to help him find her, and when Milo is finally reunited with his wayward sister, he realizes that moving wasn’t so bad after all.

This would be a good story to read with children who are facing a move to a new house, school, or city, to encourage discussion around being open to new experiences. (Suggested ages 5-8.)

Moto and Me: My Year as a Wildcat’s Foster Mom by Suzi Eszterhas 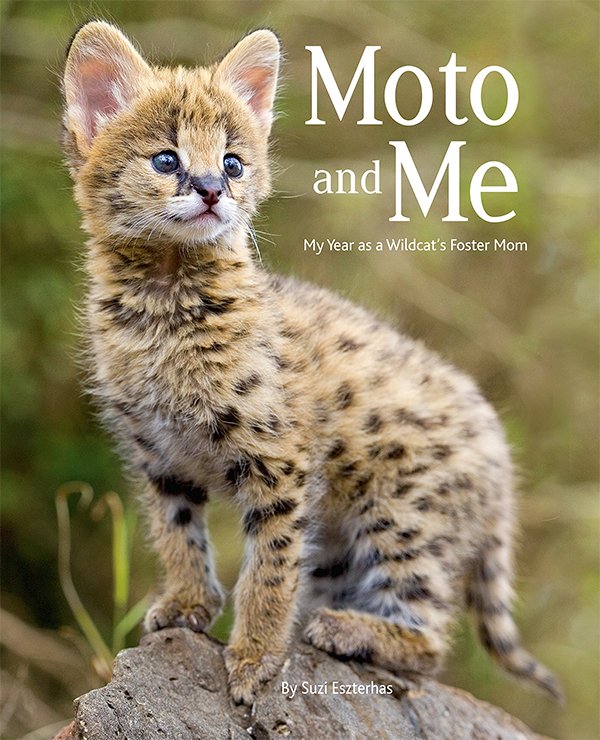 Moto and Me is a new nonfiction wildlife rescue feature from Suzi Eszterhas, nature photographer (see our review of Sea Otter Rescue here). Eszterhas shares her experience fostering a wild serval kitten separated from his mother during a savanna fire in Kenya. Heartwarming photos of Moto snuggling, eating, playing, and hunting accompany simple descriptions of how Eszterhas taught Moto the skills he needs to live successfully in the wild.

Chronicling his growth from a two-week-old kitten to an almost-grown eight-month-old, the appealing kitten pictures drew my girls in right away. Eszterhas explains how she fed and cleaned him, introduced a stuffed Mr. Ducky as a substitute sibling, and even wore him in a pouch! Then as Moto grows up, she documents the process of weaning, teaching hunting skills, and encouraging independance. The final pages includes general information about servals for children interested in learning more. (Suggested ages 6-9.)

How to Make a Universe with 92 Ingredients: An Electrifying Guide to the Elements by Adrian Dingle 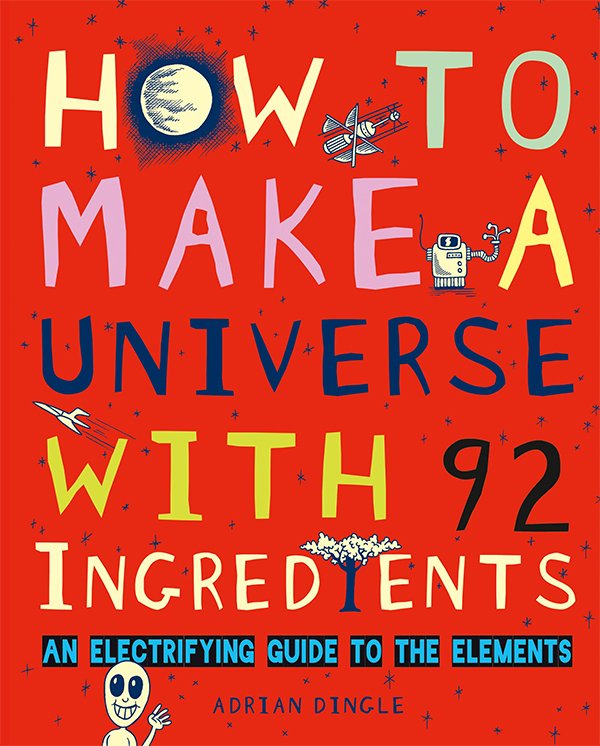 What’s inside a star? Why can’t you drink ocean water? How does soap know what’s dirt and what isn’t?

This one isn’t a new release, but Tee was desperate for more science-y stuff, and this reference book fit the bill nicely. Owlkids has always done educational books well, and this one is no exception. Some might think that this would be a dry subject, but Dingle keeps the material entertaining and accessible. We started with the periodic table of elements at the front of the book (plumbum is guaranteed to elicit laughter over and over again) and moved on to the idea that everything is made from atoms and molecules. With hands-on experiments and feature boxes in each section spotlighting interesting facts and important science figures in the field, there’s lots here to keep kids interested.

This volume is aimed at older children, but Tee is still fascinated by the material. We tend to read it together so I can help explain some of the more complicated terminology. This is a book she can grow with. (Suggested ages 10-13.)

One lucky This West Coast Mommy reader will win all eight of the children’s books reviewed in this post, courtesy of Owlkids Books! 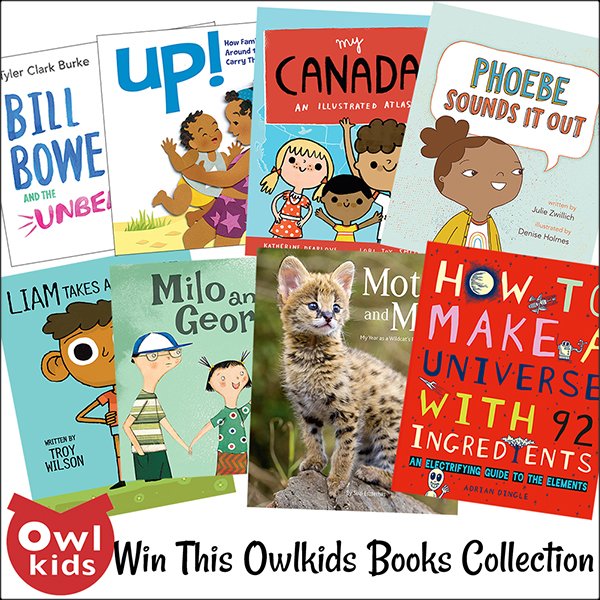 Enter to win in the giveaway widget below. This giveaway is open to residents of the US and Canada, 18+. All winner’s entries will be verified.

Disclosure: I received sample items for review. All opinions expressed are completely honest and my own, based on my personal experience. Your experience may differ. This post contains affiliate links. This West Coast Mommy is a participant in the Amazon Services LLC Associates Program, an affiliate advertising program designed to provide a means for sites to earn advertising fees by advertising and linking to Amazon.com.