Some of you may know Nic and Elli for their pocket diapers. I recently got to meet Yvonne, the mom behind Nic and Elli (named after her children, of course), at my local kids swap. My mother-in-law was looking for some basic pocket diapers to gift her daughter (cool grandma, hey?) when we saw their table and went over to shop.

I started chatting with Yvonne about fluff, as cloth diapering mamas tend to do, and she shared that she had recently started making a line of premium hybrid fitted diapers. Now, despite being what I consider a pretty experienced cloth diapering mama with two babies and close to four years of diapering under my belt, I had to admit I’d never tried a hybrid fitted. Before I left that day, we’d agreed that I could try out one of their Nic and Elli hybrid fitted diapers and write a review for you on my blog.

Anatomy of a Nic and Elli Hybrid Fitted Diaper

Nic and Elli hybrid fitted diapers are made with 3 layers. The outside is stretchy knit fabric and the inside is super soft  cotton velour. Sandwiched between these two is a layer of hidden Malden Mills fleece. The fleece helps keep the moisture in, but it isn’t waterproof. The wide elastic around the back and legs is nice and soft on chubby thighs, but still does the job well. This diaper has 2 rows of snaps across the front to adjust waist sizing. The longer row on the front has 12 snaps, and the shorter row on the reverse side has 10 snaps. These inside snaps are used when you fold down the rise. Each wing has 3 waist snaps and the left wing has 2 crossover snaps to snug the waist down for skinnier babies. 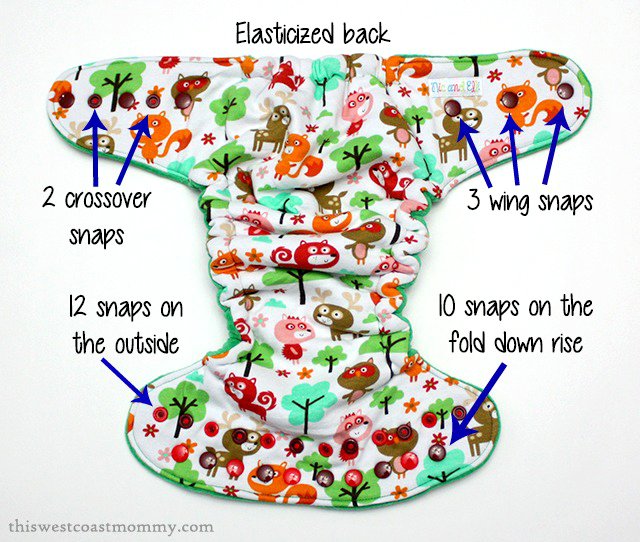 These hybrid fitteds come with a lay in trifold-style insert made from 2 layers of bamboo/hemp. When folded into thirds, you get 6 layers of absorbency. Nic and Elli also includes a bonus 3 layer hemp terry insert with their fitted diapers. That’s 9 layers!

This diaper is estimated to fit from 10-40 pounds. The size is adjustable using a fold down rise. To get the best fit, lay baby on the diaper with the back of the diaper at the natural waist. Pull the front of the diaper up through baby’s legs and fold the front down until the rise comes just below the bellybutton. Snap the wings around to fit comfortably. 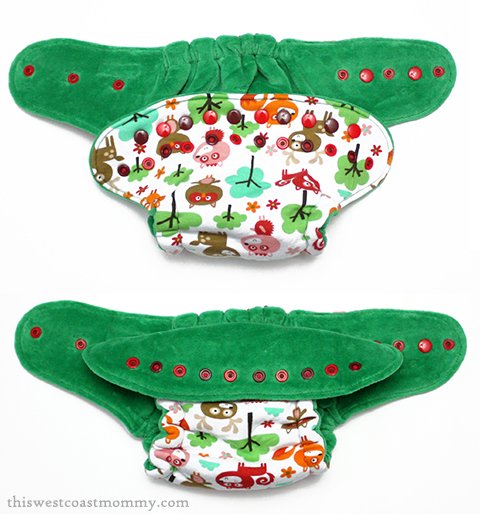 Here you can see the smallest size on the left with the rise folded down and the crossover snaps in use. On the right side, the rise is left up and the waist has plenty of room for even the chubbiest babies. 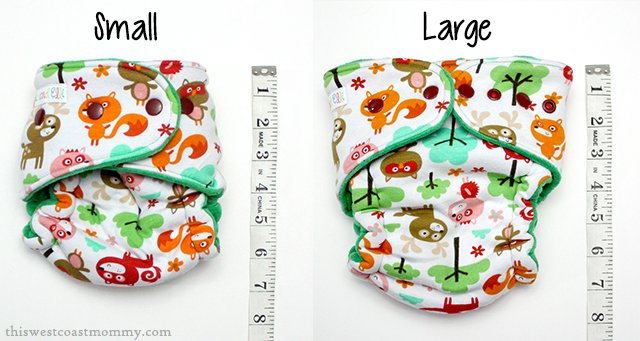 Just like regular fitted diapers, hybrid fitteds do not have a waterproof layer. To be absolutely safe, you can use a waterproof cover or wrap over this diaper, but the hidden fleece layer does give a measure of water resistance. According to Yvonne, lots of babies, including hers, can go 6-9 hours overnight before the outside gets damp. I know that Kay can be a heavy wetter so I used a cover over this diaper when I tested overnight. It was wet through by morning, but during the day I am able to go 3 hours easily without a cover. 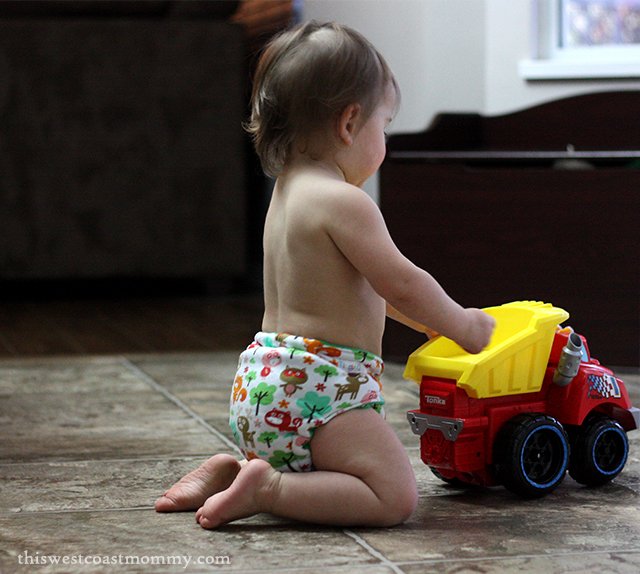 Yvonne washes the fabrics five times before she sews the diaper up and sends it to its new home, so there’s no need to prep it. This is a huge deal! I get so bummed out (LOL – see what I did there?) when I receive a super cute diaper and I can’t put it on my baby until I’ve done all the prepping. This diaper is wonderfully squishy, if you like that sort of thing. But if you’re looking for a trim diaper you can fit skinny jeans over, this one (and pretty much any fitted diaper for that matter) isn’t it.

I very rarely use diapers with a fold down rise, so it took me a couple minutes of adjusting to figure out whether I should fold the rise down or leave it up. At 17 months and 24 pounds, Kay seemed to be in the transition zone between folding the rise down and leaving it up. After trying both ways, I decided it fit better with the front up. 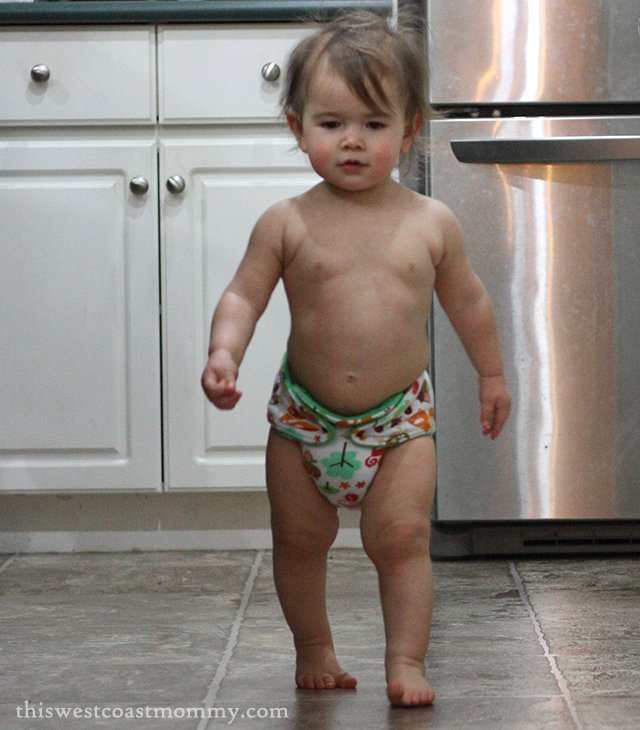 The inserts are all natural fibers so I don’t have to worry about what’s touching Kay’s skin. I also like that this is a trifold insert. It does take an extra couple of seconds (if that) to fold it into thirds, but the advantage to this type of insert is that it’s easier to wash clean and quicker to dry in comparison to other inserts. 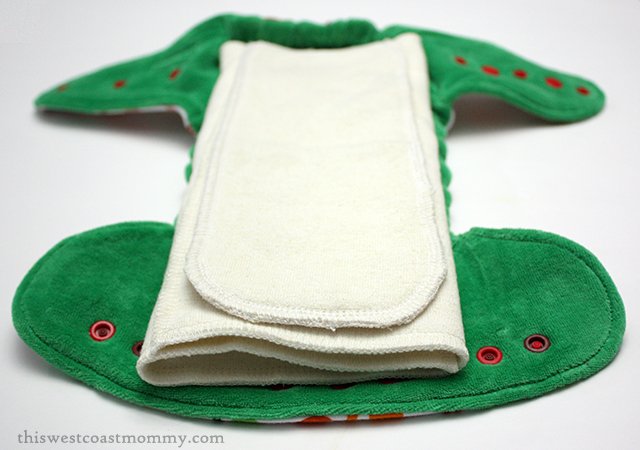 For the first time, I put this diaper on Kay just before her nap. When she woke up two hours later, the diaper had leaked through the fleece around one of the leg holes. The inserts were by no means saturated, so I think what happened is she was sleeping on her side and had such a big pee that there wasn’t time for it to be absorbed. It must have run off the side of the insert, making a little puddle sitting against the velour which eventually leaked through. Since then, I’ve been a bit more careful about laying the inserts in right across the whole width of the diaper and we haven’t had any more leaks like that.

The other day, Kay put this diaper to the full test. And I mean full. I’m happy to report the thick cushioned elastic at the back and legs kept all the mess in and the velour washed up nicely with no staining whatsoever. There was a slight stain on the insert, but given that Kay had been eating handfuls of blueberries, I’m not surprised. I’ll sun it out next time we get some nice weather.

Nic and Elli has made an adorably squishy diaper that fits nicely without red marks and does not gap around the legs. The price is comparable to other fitted diapers and fair for the quality of the materials and workmanship. I will say I still prefer to adjust the rise with snaps rather than folding, but it’s a small thing I can live with.

In my admittedly limited experience, I like the hybrid fitted style for allowing more airflow to baby’s bum while around the house. I don’t think I’d take a chance without a cover for overnights or going out of the house, but naps have not been a problem for us after the first time. The nice thing about this diaper is that you can choose to use a cover or not. I like it for days, but this fitted diaper is so absorbent that it’s also entered my regular rotation of overnight diapers, with a cover on.

But wait, there’s more! Nic and Elli is sponsoring a fantastic giveaway in next week’s Natural in the New Year Giveaway Hop. Come back then to enter to win a hybrid fitted diaper of your very own. Sign up for This West Coast Mommy emails (over in the right sidebar) to make sure you don’t miss it.

Check out all the adorable diapers at Nic and Elli. Hybrid fitteds start at $25. Yvonne is offering 10% off to This West Coast Mommy readers until February 28, 2014. Just enter code WESTCOAST at the Etsy checkout.

Disclosure: I received a sample item for review.  All opinions expressed are completely honest and my own, based on my personal experience. Your experience may differ.