I never had much of a relationship with any of my grandparents. My mother’s parents lived halfway across the world and didn’t speak English. My father’s father died before I was born, and his mother had a series of strokes when I was maybe five or six. After that she didn’t know who we were anymore. She moved to a nursing home where she stayed until she passed away when I was eleven. I have a few vague memories of Scotch mints and one glorious memory of rolling down a grassy hill in our backyard with her the summer I was four years old, but that’s it.

In contrast, my husband has told me about the close relationship he enjoyed with his maternal grandparents right up until they passed away when he was in his late twenties. I never knew them, but I’ve heard so many wonderful stories about them, his grandfather in particular. He remembers fondly his grandfather getting down on the floor and playing Star Wars with him, and sitting patiently on a bench for hours at the fair while Chris and his sister went on all the rides. He often says he learned a lot about being the loving and compassionate man he is today from his grandfather. I can hear the warmth and love that suffuse his stories, and that’s when I know I missed out. 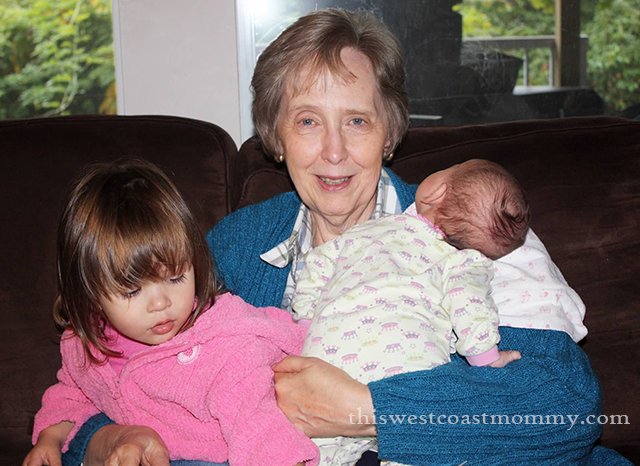 In our family, my husband’s mother is the one who is most involved with the kids. My mother passed away eight years ago so she never got to meet our girls. And of course their grandfathers love them very much, but they’re just not involved to anywhere near the same degree. My mother-in-law has four grandchildren whom she dotes on: Chris and I have our two girls, and my sister-in-law has an eight year old girl and a brand new baby boy born just three days ago. Welcome to the world, Trippton!

We’re lucky enough to live just a few minutes from hubby’s parents, and Grandma Sherilyn comes over every week to play with the girls and give me a chance to catch up on housework or just to take a break. I love that my kids have such a close relationship with their grandma. I know she cares for them in an entirely different way than their father and I do, and in fact she’s supposed to.

Grandma always thinks of her grandkids. She remembers every special occasion. She’s willing to play the same pretend game for hours on end. She’s always up-to-date on what thing each grandchild is currently into. She’s the one who always has a granola bar in her purse. She’s the one who regularly surprises them with little presents or a new shirt. She’s the one who makes the Easter treat baskets. She’s the one who spends hours searching store after store for the perfect toy to put in their Santa stockings. I swear she’s almost as excited to see her grandchildren’s faces light up when they see their presents, as they are excited to open them.

So here’s to all the grandparents, but most especially you, Grandma Sherilyn. You do so much for your family. We’re incredibly lucky to have you in our lives, and we love you very much.

What do you think is the best thing about grandparents? What role do they play in your life?