This Thanksgiving weekend we attended the Dora the Explorer Live! Search for the City of Lost Toys stage show at the Bell Performing Arts Centre in Surrey, BC. Koba Entertainment was kind enough to provide me with tickets to review the show for you. Here we all are before the show. Yes, that is her favourite Dora shirt Tee has on. 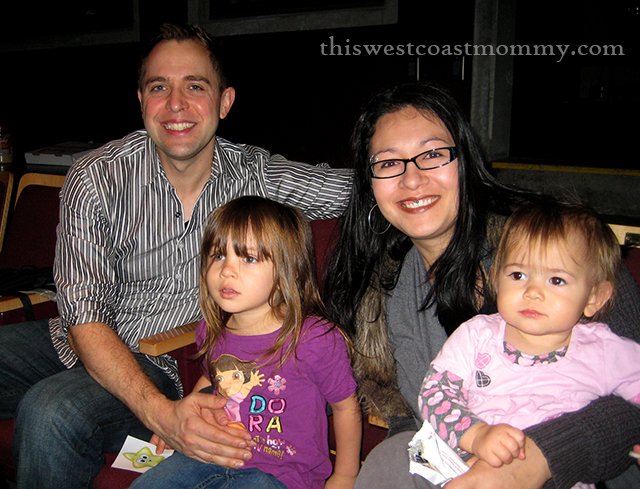 Dora is embarking on her most important mission yet in Nickelodeon’s Dora the Explorer Live! Search for the City of Lost Toys. Dora has lost her teddy bear and the search is on to find him. With help from the audience, Boots, Map, Backpack, Diego and more, Dora uses her directional, counting, musical and language skills to successfully pass through the Number Pyramid and the Mixed-up Jungle to reach the City of Lost Toys. But watch out! You never know what that sneaky fox Swiper might be up to along the way!

Dora the Explorer Live! is a two act live action musical with a 15 minute intermission in the middle. All the characters are dressed in full body costumes, and the audio is prerecorded by the actors from the TV show (or very convincing impersonators). The stage show is adapted from “The Lost City” episode, and overall the show stays true to the feel and look of the TV show. Kids will have no trouble recognizing the characters or the story. 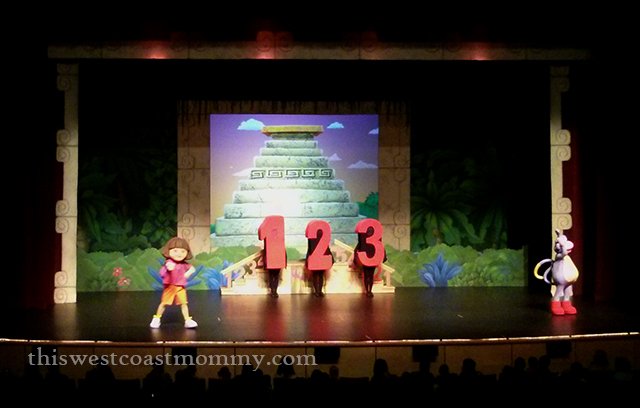 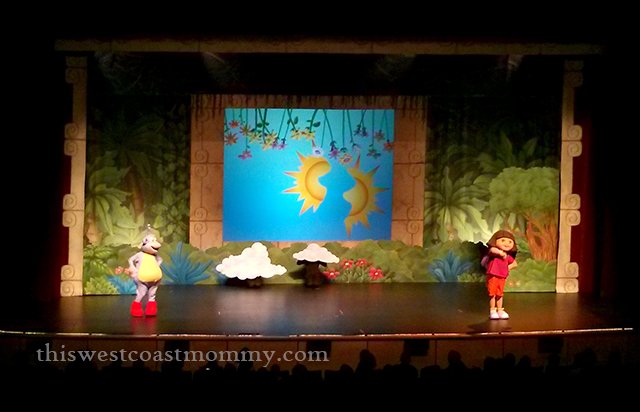 The Mixed Up Jungle 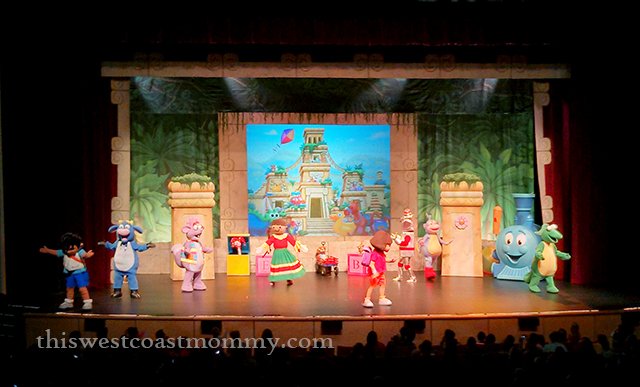 In the City of Lost Toys 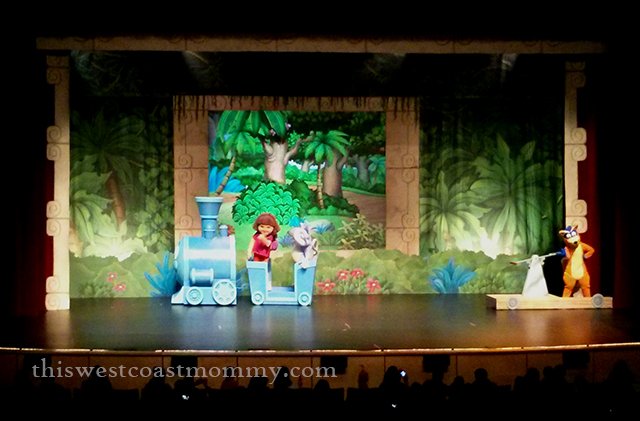 We all had a great time, even the adults. The show was professionally produced and the songs were catchy. The actors did a good job miming their parts and the dance numbers were well choreographed, especially when you consider every single actor was stuffed into a full-body suit with limited visibility.

Tee’s favourite part was Swiper, but mine was seeing the smiles on both my daughters’ faces throughout the show. I wish I could show you a picture of her face when she first saw Swiper sneak across the stage, but it was too dark to get a photo. Her eyes were huge, and she wore the broadest grin I’ve ever seen! She couldn’t contain her  wonder and sheer glee when Dora and Diego made their appearances. The whole gang was there, and Tee was sure to tell me everybody’s names: Swiper, Boots, Benny, Isa, Tico, Dora, Backpack, Map, Diego, Baby Jaguar, and Azul. Even the Fiesta Trio and the Explorer Stars made an appearance.

I wasn’t sure how Kay would do at the theatre, being only 14 months old, but she loved it. In fact, I’m not sure who had a better time. She danced her little heart out almost the entire time! She got a bit fussy during the intermission, but a quick nursing session and the start of the second act fixed that. 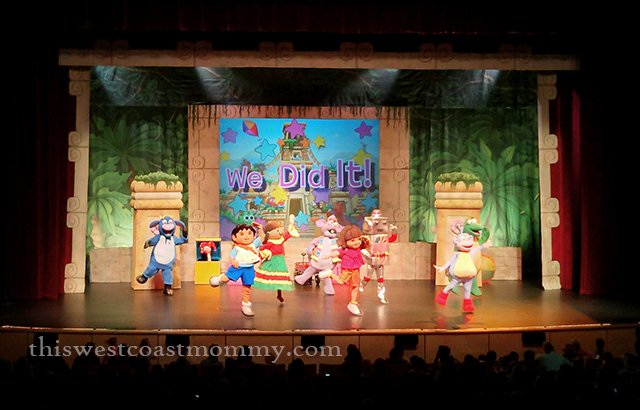 When the lights came on, Tee announced, “I love it! Let’s do it again tomorrow!” She still hasn’t stopped talking about it. We’re all thankful we got the chance to attend the Dora the Explorer Live! show. This was a magical experience for both my girls, and I wholeheartedly recommend taking your little Dora fan if you have the opportunity.

The cross-Canada tour runs until mid-December, so check out the tour dates and find a show near you. If your kids are any kind of Dora fans, you’ll be their hero for at least a week!

Disclosure: I received media tickets for the purpose of writing this review.  All opinions expressed are completely honest and my own, based on my personal experience. Your experience may differ.