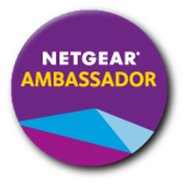 I’m so pleased to share with you that Netgear recently invited me to be a part of their NETGEAR Ambassador Program. That means that over the next little while, I’ll get the chance to test out the latest Netgear tech and share my honest opinions and experiences with you. There’s plenty of info out there on technical specs and numbers and processor speeds and whatnot, but that’s not my area. Instead I’ll be talking about how each device works in real life for me and for my family. How hard is it to set up? Does it do what it says it will? Is it worth the price?

. With its six antennae, three WiFi bands, a combined wireless speed of up to 3.2 Gbps, and Smart Connect intelligence, this device is their top of the line router.

Let’s start with a little background info. We’re a connected family. Hubs and I both have laptops. We have four tablets in circulation right now, plus two smart phones, an Apple TV, a Roku streaming device, two game systems, and two handheld game systems. And it all runs on wireless. Streaming, gaming, blogging, surfing – if your family is like ours in this respect, an older router can get overloaded and sluggish.

This router is designed for families like mine – constantly online and with multiple devices. Tri-Band refers to the three WiFi bands or wireless networks it offers: one 2.4 GHz band for older devices, and two 5GHz bands for newer, faster devices. The router also has two USB ports so you can share a USB printer on the network or plug in a USB drive to back up your data. (Always back up your data!)

The Nighthawk was easy to install. The setup wizard was user-friendly and guided us step by step through the basic setup. If you’re more tech-savvy you can fiddle with the settings and fully customize it, but the router is totally usable right out of the box on the default settings.

Unfortunately, the hardware from our internet provider has the modem and router integrated into one device, and it locks out the ability to substitute your own router. So instead we piggybacked the Nighthawk router as a wireless access point, and that allowed us to access the 5 GHz bands which our old router did not have.

One thing I did not expect was the size of the router. It’s twice the size of our old router, but with its sleek black case and six adjustable space age antennae that fold flat, it’s not an eyesore that needs to be tucked away out of sight. 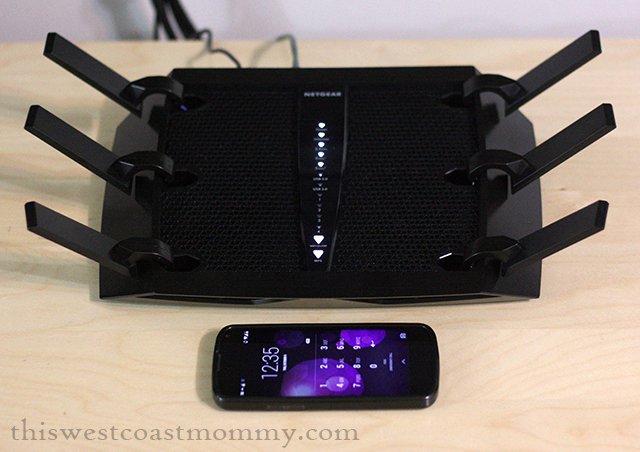 I’m loving the new 5 GHz bands. Older devices, baby monitors, many cordless phones, microwaves, and the majority of the other networks in our neighbourhood run on the older 2.4 GHz band which can lead to interference. In fact, I’m used to my wireless connection failing when someone turns on the microwave. It’s pretty annoying having to time your internet use around defrosting  ground beef for dinner.

But now we had TWO 5 GHz bands to play with. These are configurable as separate networks, but we used the Nighthawk’s Smart Connect feature which automatically detects and assigns devices to optimize the band resources. So for example, if you’re streaming high definition Netflix on one band, the router will automatically assign other devices on both bands to balance the load. You can also manually assign devices to a particular band if you prefer. 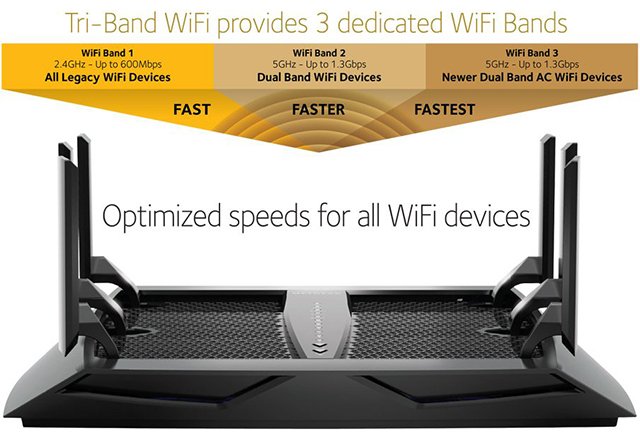 Both the 2.4 and 5GHz bands clocked faster download speeds than the old router (65 Mbps on the Nighthawk’s 2.4 GHz band vs. 50 Mbps on the old router; and 250 Mbps for the Nighthawk’s 5 GHz band). But what does that mean in practical terms? That means file downloads are faster and streaming is less likely to pause or stutter. I downloaded a large file via both routers and saw a noticeable difference in the transfer speed. Faster is better!

I’ve also noticed that the Nighthawk’s 2.4 GHz has a stronger signal and greater range than our old router. Now we still get a signal two houses over when before we would lose it at the end of the driveway.  And no more lost connections when the microwave is on – I can defrost and surf the web at the same time!

I can stream high def TV shows on my iPad while hubs games on his laptop without a hiccup, but to really test it out I got our two laptops, the iPad, iPad Mini, smart phone, and an older Android tablet streaming high definition video all at the same time. I felt kind of ridiculous sitting on my couch surrounded by 6 devices all playing Star Wars in HD, but it was all for your benefit, dear reader! When we tried the same thing on the old network, I saw occasional hiccups and pauses in the streaming as the router tried to keep up. 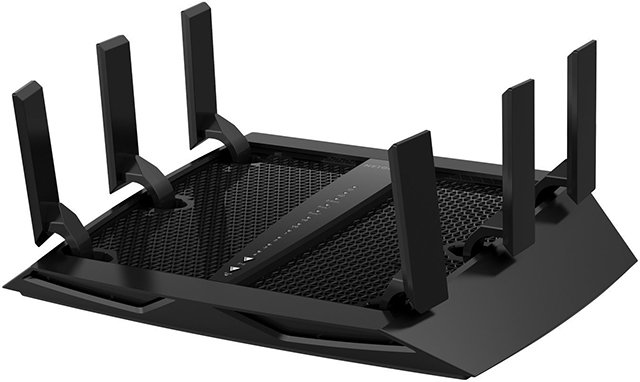 Overall, the Nighthawk X6 does what it says. The 5 GHz bands mean less interference and fewer dropped connections. We saw a slight but noticeable improvement in performance particularly when streaming multiple devices. The future is wireless, and as we collect more wireless tech (e.g., wireless thermostats, smart TVs, alarm systems, etc.), the Nighthawk’s speed and capacity for multiple 5 GHz devices make it less likely to become obsolete anytime soon.

At just under $300, if it’s just you and the dog in your home, you probably don’t need this. But if you have a large family, especially with teenagers who live online, this is an investment to consider. The Nighthawk X6 Tri-Band WiFi Router

is available from Amazon.com