This is part 2 in my series of long-term reviews about diapers in my stash. I’ve been reviewing these older diapers to see how they’ve held up over time, both in terms of appearance and in performance.

Today I’ll be talking about the Mother-ease One Size fitted diaper. These diapers have been around, essentially unchanged, for almost 20 years. When my sister-in-law had a baby in 2005, my mother-in-law bought eight Mother-ease One Size diapers for her. I inherited these diapers when my first baby was born in 2010. In the last eight years, they’ve been worn by three babies and gone through several years in storage as well. How do they perform today?

Anatomy of a Mother-ease One Size Fitted Diaper 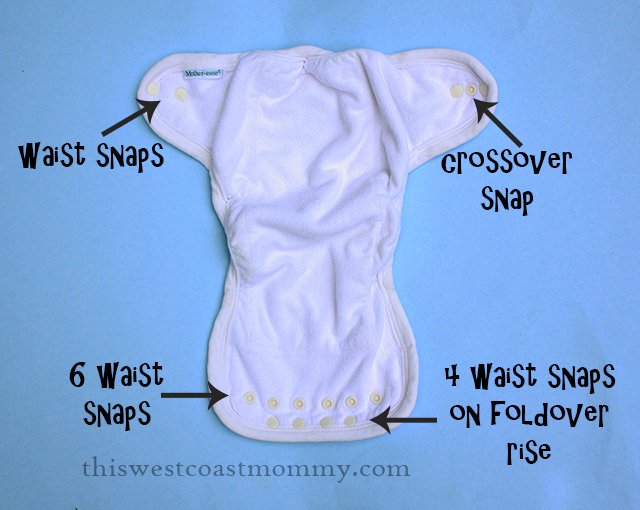 There is an extra layer of fabric sandwiched down the middle of the diaper, and Mother-ease sells inserts that snap onto the inside snaps for added absorbency. As these snaps are on the outside when the rise is folded down, you can’t use the snap-in inserts until baby is bigger and doesn’t need the lower rise. 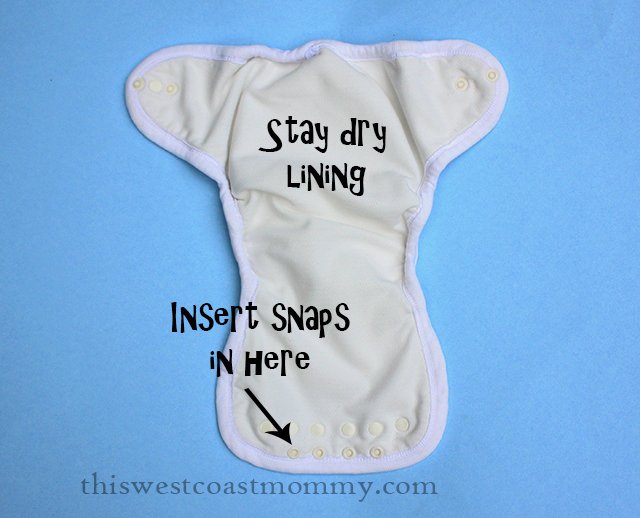 Nobody remembers how much my mother-in-law paid for them back in 2005, but Mother-ease One Size Fitted Diapers with the stay dry lining are currently listed at $15.75 on the Mother-ease website. Basic white and unbleached cotton terry fitteds are $12.95, and colours are a little more at $13.45. Keep in mind that these do require a cover to make them waterproof and you’ll need to factor that into your start-up cost. You can reuse covers until they get too stinky or get poop on them, so think roughly one cover for every 4 diapers.

My sister-in-law used her Mother-ease One Size fitteds on her daughter from about six months through to potty training at age three. I used these for overnights on my oldest for about the same age range, and I’m currently using these on my youngest, again for overnights. Kay is currently one year old and 21 pounds. Personally, I don’t find these diapers that adjustable, and I wouldn’t use them on newborns or babies under three or four months old. The fold down rise gets quite bulky, and I found it difficult to get a proper fit around Kay’s thighs until she was a bit bigger. Because of its bulk, you need a generously-cut wrap to cover this diaper. I use Mother-ease Air Flow covers because they’re designed to fit these diapers. 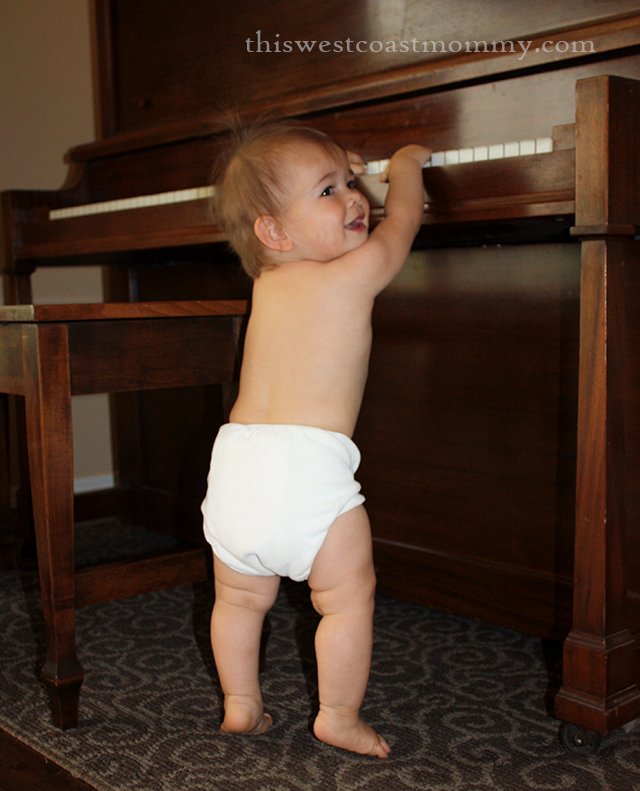 However, where these diapers really shine is at nighttime. On their own, they aren’t absorbent enough to last through the night, but they’re generously cut enough to provide lots of room for one, two, and even three inserts for added absorbency. When paired with a matching Mother-ease Air Flow cover, I honestly can’t remember the last time I had a leak with one of these.

Because there’s no PUL, these can be washed in hot water and put in the dryer as needed. They are sturdy enough to survive repeated washings and even occasional bleaching, a blessing with overnight diapers which can develop ammonia problems over time. The elastics around the waist and legs are encased in rib-knit binding and are very gentle on chubby baby thighs – no red marks here! 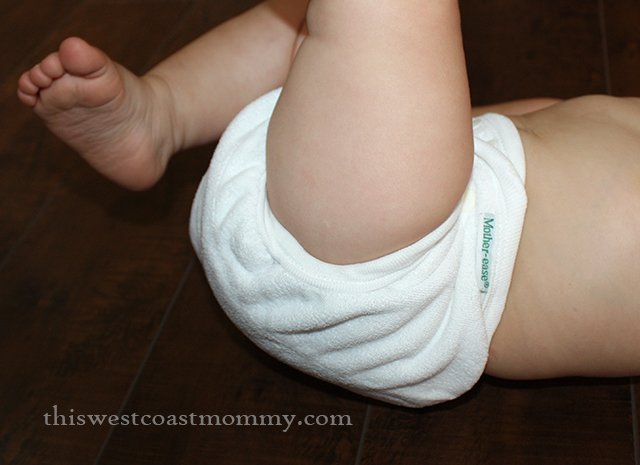 
I’ll be honest. These are not particularly cute diapers. They’re bulky, especially on smaller babies, and don’t fit under the vast majority of my kids’ pants or jeans. I don’t usually use these during the day for that reason. Their full cut makes them kind of the granny panties of diapers, and they really do need to be paired with Mother-ease Air Flow covers. In a pinch, I can use Bummis Whisper Wraps a size up, but I have to be very careful to make sure all of the diaper is tucked in or it’ll leak. It would be nice if I could use some of my other covers or wraps with these diapers, but they just can’t cover all that diaper.

As I mentioned before, these diapers don’t seem to fit smaller babies all that well, though they fit my niece and oldest daughter comfortably until age three. To be fair, very few one size diapers actually fit from newborn to potty training. These are simply on the larger side.

Yes! My Mother-ease One Size fitteds are in great shape! They certainly don’t look like they’ve been peed and pooped in by three different babies over the course of eight years. The stitching is all intact, and all the snaps remain securely attached. The stay dry material on the inside doesn’t pill, and I didn’t notice staining on any of the eight diapers. It’s possible they may have yellowed, but I can’t tell because they’re all the same off white colour.

The only sign of wear I can see is the terry material has worn bare on a few small areas that get rubbed against the most. The edges around the leg holes and the corners of the sewn in soaker region show the most wear. Keep in mind I had to examine the diaper carefully to find this. It’s not obvious to the casual eye. I think that’s pretty good for how much use they’ve been put through! 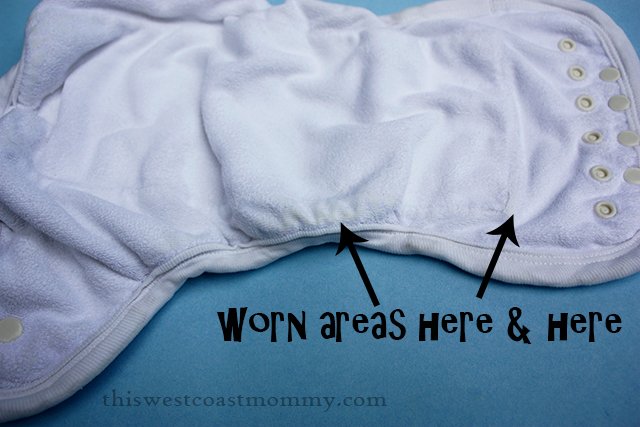 Mother-ease One Size fitted diapers are definitely a workhorse diaper. They’re not pretty and they’re too bulky to wear under jeans, but they are perfect for overnight use and will keep your baby’s sheets dry. And at the end of the day (like at bedtime – LOL), isn’t that the most important thing? Keep in mind I found it difficult to fit these diapers properly on my babies when they were smaller, so I wouldn’t recommend these for the first few months. On the plus side, these will most likely last you right through to potty training, unlike some other one size diapers. Bottom line, if you’re having trouble with leaks at night, these are definitely worth a try.

Disclosure: This is not a sponsored post. I have no relationship with Mother-ease or its retailers, and I did not receive any compensation financially or in kind. I inherited these diapers from my sister-in-law. All opinions expressed are completely honest and my own, based on my personal experience. Your experience may differ.