Editor’s note: We believe that all birth stories and all birth experiences matter. This post is part of an ongoing series of birth stories submitted by readers and fellow bloggers, featuring a diverse range of women and their experiences. Morgan’s high blood pressure during pregnancy led to an induction, vacuum extraction, and NICU stay. If you would like to share your own birth story, please visit this post to learn how. ~Olivia 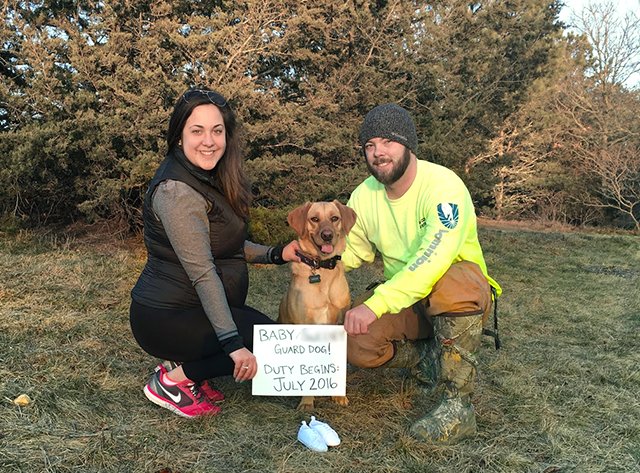 Then more exciting news. We were going to have a DAUGHTER! 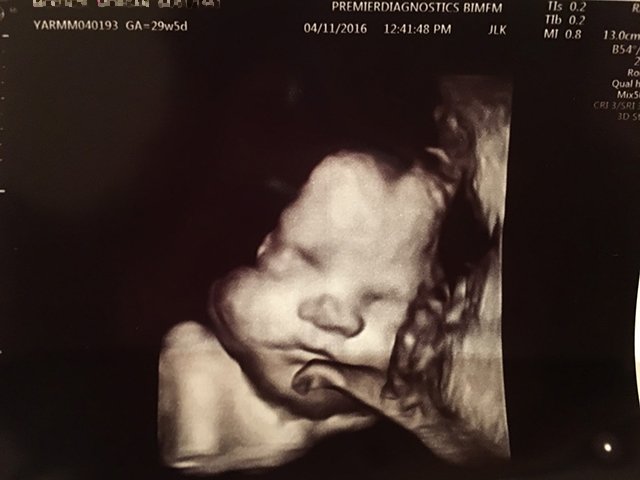 The first four months flew by with hardly any pregnancy symptoms. Things were a little more challenging in my third trimester though. In April, I was put on Labetalol for gestational hypertension (high blood pressure) and required to go to the hospital once a week for non-stress tests. I was in my last year of college, and I was not going to have this baby until I had my diploma in hand! That required a lot of bathroom breaks at Exit 2 on the commute up to Bridgewater twice a week. When I graduated with my bachelor’s degree on May 11th from Bridgewater State University, I was a SUPER pregnant bear.

On May 27th, I had a scheduled non-stress test, and my blood pressure was really high. My blood work and urine both came back normal, but the midwife and doctor on call were concerned and asked me to come back on Memorial Day for another non-stress test. By Memorial Day weekend, I felt queasy and anxious. I couldn’t explain it, but I just couldn’t relax, and I spent the majority of the weekend on the couch with my bump. 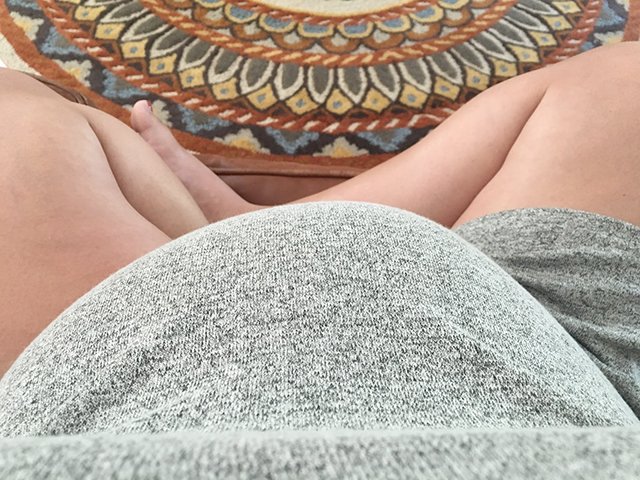 The night of May 29th, I felt super anxious. I had been cramping all weekend, and I was nervous about my non-stress test the following day. Why would they have me come in on Memorial Day? Something must be wrong. Before I went to sleep I packed our hospital bag just in case. Of course, I got no sleep, and the next morning I told Bryan I had this strange feeling we should bring our bags.

We arrived at Cape Cod Hospital and went up to maternity on the fourth floor. I waited on the monitors for hours, and my blood pressure was through the roof. The midwife came in told me that the doctor wanted me to stay for a 24 hour urine collection and then see where things went from there. She said, “I can almost promise you won’t be leaving this hospital without a baby.” The minute she finished that sentence I instantly burst into tears. I was happy. I was petrified. I was anxious. I think I felt every single emotion all at once, right at that moment.

They got me settled into bed and hooked me up to a fetal monitor. Not long after that, a handsome doctor came in. He told me that I needed to be induced as soon as possible because my high blood pressure was very dangerous for both me and my baby. He told me I needed a magnesium drip.

I was so scared. I looked at Bryan, and he grabbed my hand when he saw the look on my face. He told me, “You are going to do so good.” That’s all I needed to hear. I agreed to the induction, and before the doctor could even leave the room, the nurse was coming in to hook me up to fluids. The magnesium drip was awful. I felt rotten. I was instantly weak, queasy, and hot. Hot as hell. But I remained positive. That’s when I began saying to myself, “My strength will conquer all pain.” I knew it was going to be worth it, because this all meant I was closer and closer to holding this baby in my arms. 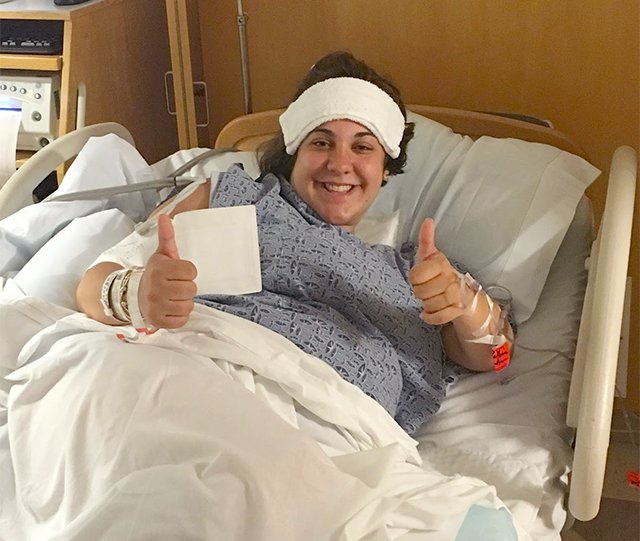 The nurse broke my water around midnight. It was just a little bit, but a few hours later, there was a HUGE gush of liquid. I frantically called down to the nurses station, and when the nurse came in she let me know that there are two bags of fluid and I had just lost my second one.

Over the next few hours, things got rough. My contractions came closer and closer together, and the pain gradually increased. I was determined to avoid an epidural. Not because I wanted an all-natural birth, but more because of my fear of needles. I’d seen that needle, and I didn’t want it anywhere near me. I stayed strong during each contraction, focusing on the misspelled word on my chalkboard to the right of my bed. I wanted so badly to be able to walk through my contractions and stretch on the medicine ball, but due to the Pitocin and magnesium drip, I was stuck in bed.

By 4:30 in the morning, the pain was unbearable. It felt like I was being stabbed in my back, lower stomach, and pelvis. At the same time, I was nauseous and vomiting with every contraction. It was exhausting. The nurse came in and gave me the discouraging news that I was only 4 cm dilated. Both the nurse and Bryan mentioned the epidural to me. I was in so much pain that I gave in. I just couldn’t go without pain medicine any longer. I was scared, but the pain filled my mind so I didn’t have much time to think about it. Waiting for the anesthesiologist felt like forever. I was so sick, and I wanted relief so badly. Finally, after twenty minutes, the anesthesiologist arrived.

They sat me up and moved me to the side of the bed. I continued to vomit, and then I peed on the nurses foot. I was the definition of a hot mess. They gave me a pillow to hold, and Bryan held my shoulders. Before I realized what was happening, I was screaming in agony from the epidural. I don’t know what happened. I just knew it didn’t feel right. I felt the pain all the way down my left side, and I felt the wire go all down my spine.

I laid back and had another contraction right away. One side felt somewhat numb, but I could still feel the other side. All of a sudden I felt super dizzy. I looked at the nurses and their expressions were not good. Apparently one of the reactions to an epidural while on magnesium is a dangerous drop in blood pressure. Before I knew it, they tipped me nearly upside down. My blood pressure kept dropping to the point where I heard someone request a crash cart just in case. If I hadn’t been so out of it, I would have been panicking. My blood pressure was 60/30.

After shots and shots of a fancy medicine that I couldn’t pronounce, my blood pressure finally rose to a safe number… Slowly the pain left just long enough for me to get a couple hours of sleep. I woke up after a few solid few hours of sleep and the pain was back, just as intense as before the epidural.

I was 6 cm dilated, and the contractions were horrible. I felt like I had been in labor forever. Half an hour after waking up, I began to feel a strong urge to push. I called frantically for the nurse who checked me again. I was 8 cm now, but they did not want me to push until I was 10 cm. I couldn’t stop though. With every contraction, I had an urge to push that felt like I was having a bowel movement. I screamed and pushed, pushed, pushed. There was no stopping me. My midwife was down by my legs, and I had a nurse on each side. Where was my doctor?

On each contraction, they had me switch from my hands and knees, to my back. They were having trouble finding the baby’s heart rate, so they inserted an internal heart monitor. During one of my contractions, the baby’s heart rate plummeted. They were panicking yet again, but I was in too much pain to join them. A NICU team came in just in case. Then the doctor came running in. She introduced herself and told me they might have to use vacuum extraction. I didn’t care. I just wanted my baby out and healthy.

Once the baby started to crown, the doctor attached the vacuum and pulled her entire body was out in one push. OUCH. It was the strangest feeling as her entire body was pulled out of my body. I was dizzy, but elated. I looked at Bryan. He was beaming. He kissed my forehead and told me how proud of me he was. I’ll never forget it.

But… the baby wasn’t crying. They swept her up and rushed her down the hall to the nursery. I was so scared. I cried as I said over and over, “Where’s my baby? Is she okay?” They kept telling me she just needed some extra help. I was so scared. I told Bryan to run down and be with her. That sweet girl needed her daddy more than I did. Right after he left, they massaged my stomach, and I delivered the placenta.

The doctor told me that I had a second degree tear, as well as a tear in my labia. She gave me some numbing medicine and 19 stitches. Finally, as the janitors were cleaning the room, Bryan came back in. With tears in his eyes, he passed me his phone. He had taken a picture of our little fighter and brought it to me so I could see her. 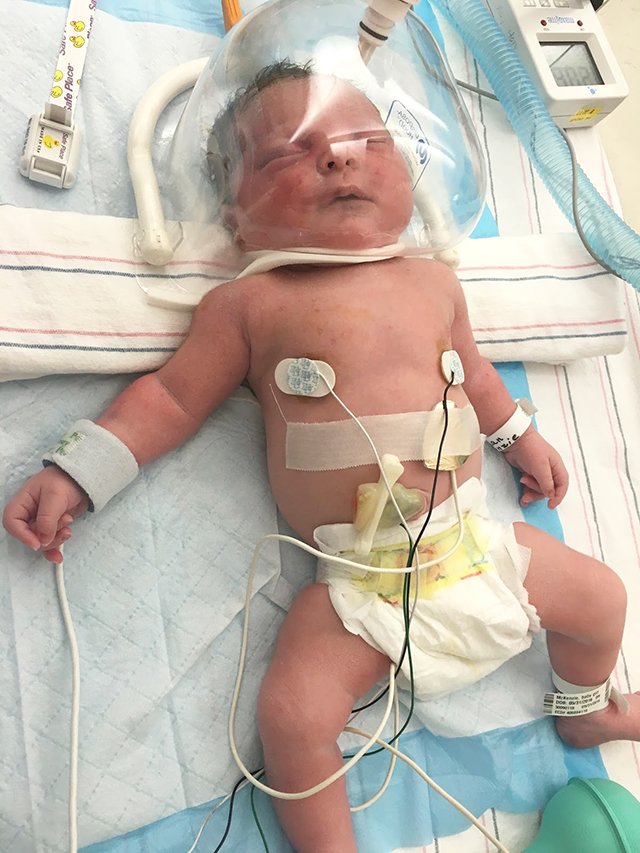 I cried. And cried. And cried. I was so happy to finally see my daughter. Sad that I didn’t get the immediate skin to skin that I dreamed of. Proud to be her mama. Excited to hold her for the first time. Scared that she was struggling. So many feelings all at once.

The doctor told me if Kenzley didn’t turn a corner by 3:00 pm, they were going to have to transport her up to the NICU at Tufts. But she fought long and hard to meet her mama because at 3:03 pm, after the longest four hours of my entire life, I heard wheels coming towards our room. In walked a nurse with my bundle of the sweetest joy all swaddled up in a hospital blanket with her little hat. She said, “Here is your daughter. Are you ready to meet her?” I instantly welled up with tears as she placed my baby on my chest. Never in my life had I felt such a feeling. It’s not a feeling that words can begin to describe. The best feeling in this whole world. I was a mama. Holding my sweet baby girl. 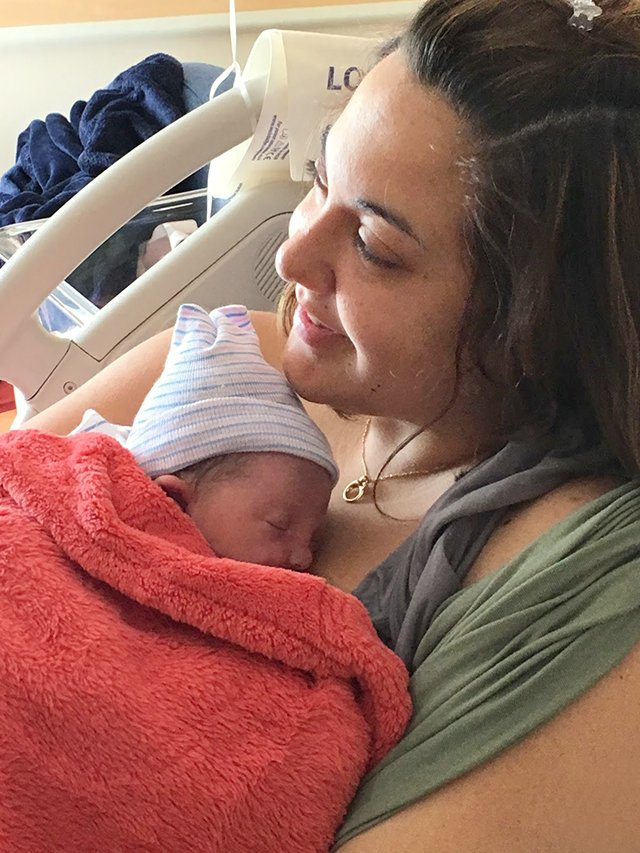 We were a family. Life is so good. 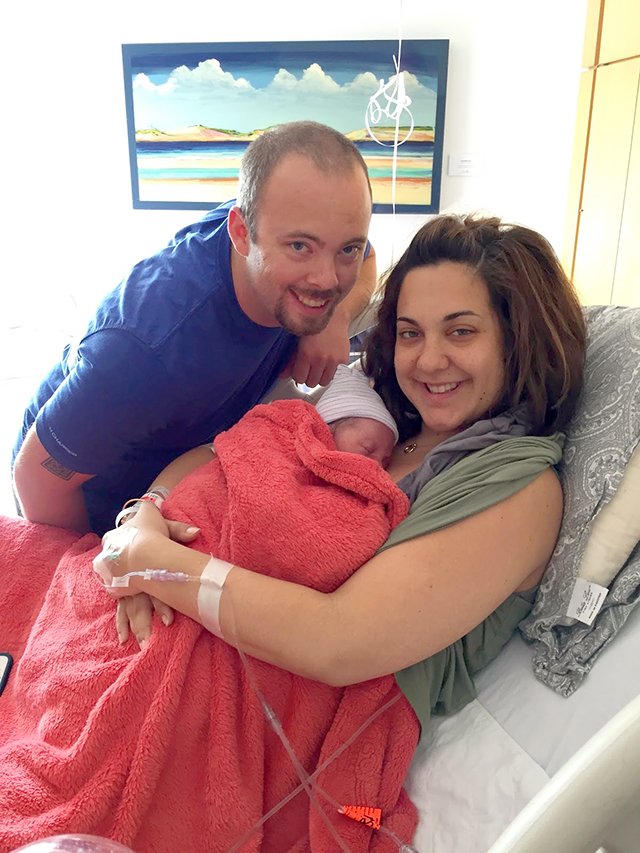