Knights and castles, dragons and trolls! Do you have a Mike the Knight fan at home? Then you need to know that Mike is on his way to the Lower Mainland! Cheeky yet bountiful, Mike the Knight and the rest of the gang are on their first ever North American theatrical tour: Mike the Knight in the Great Scavenger Hunt!

“The Glendragon Scavenger Hunt is on and the stakes are high; Mike is determined to discover the most knightly way to tackle this chivalrous quest. With a little help for the would-be-hero from his closest friends: Sparkie and Squirt, a pair of quirky dragons and his steadfast friend Trollee, as well as his wizard-in-training sister Evie, Mike leads the charge to unravel clues that require keen observation and perception as well as bravery.

Set in an enchanting world filled with medieval castles, plucky trolls and flying dragons, Mike the Knight in the Great Scavenger Hunt unfolds through a mix of adventure, comedy, music, song and dance, and of course a little bit of magic!

Driven by his resolve to be the best knight he can be, Mike the Knight embarks on a playful and interactive adventure of ultimate detection and discovery that’s perfect for the whole family.” 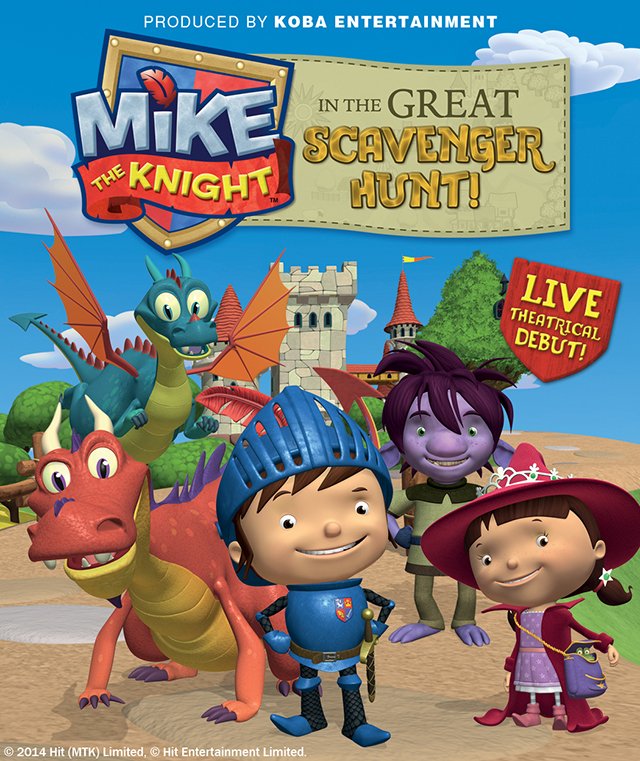 Mike, Evie, Sparkie, Squirt, and Trollee are hitting the Lower Mainland this month with shows in:

Visit Mike the Knight in the Great Scavenger Hunt for more information and to get your tickets. Not local? Mike the Knight is playing right across Canada, so check out the tour schedule to find a show near you.