Editor’s note: We believe that all birth stories and all birth experiences matter. This post is part of our ongoing series of birth stories featuring a diverse range of women and their birth experiences. Mary’s baby girl was born in water at home with the assistance of her doula and midwife. Her candid photos provide an honest and intimate glimpse into home birth.

It was Friday night around 11:00 pm when my water broke. Ren and I were lying on a mattress on the floor in the living room watching the end of Guardians of the Galaxy: Volume 2. Both of us associate the song for the final credits, “Dirty Work”, with going into labour for real. We wanted as little medical intervention as possible and were hoping for a home birth.

I thought my water had broken the night before but a swab at the hospital the next day couldn’t find any amniotic fluid so we were sent home to wait. When my water broke “again”, I remember feeling a wee bit pissed off. I knew that if I wasn’t in labour by morning I’d likely be sent to the hospital the next day with less of a chance of being sent home again. I immediately went to bed wanting to rest up for whatever was ahead, and Ren followed closely behind, turning the dishwasher on before coming to bed.

I slept until 12:45 am when I couldn’t ignore the contractions anymore. I woke Ren up who called their cousin to come help set up the birth pool. It was late on a Friday night so Jennettia had been partying, but that didn’t stop her from showing up ready for whatever we needed. I had wanted to take a bath while in early labour, but because we turned the dishwasher on before bed there was no hot water to do that or to fill the birth pool. I had been out of bed with Jennettia and Ren wanting to help but there wasn’t much I could do or focus on so I went back to bed.

The next person we called was the doula because I didn’t want to be alone while folks were getting the birth pool set up and filled, ready for River to appear. I really wanted whoever was with me to have seen before what I was experiencing for the first. I needed someone to tell me what was happening was normal, and that everything was progressing okay. 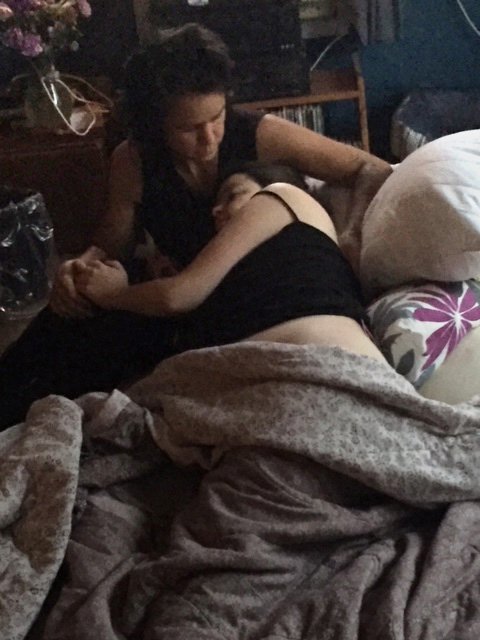 When the doula, Nicole, arrived I was still labouring in our bedroom in bed. Jennettia kept checking on me asking if I felt like I needed to poo, because that meant the baby was coming, she said. I didn’t feel like I needed to poo, but I did feel like my legs were going to break off with every contraction. It was manageable, but certainly not pleasant. Jennettia left to get some rest shortly after Nicole arrived. Nicole suggested some alternative ways to labour that would move things along faster, so we went to the bathroom and I sat backwards on the toilet for the next while, still wrapped in the blanket I had been clinging to for comfort and resting my head on two pillows perched on the toilet tank.

When Ren came to check on me in between getting the birth pool set up, I asked them to light some candles all over the house. After this I became very quiet, so Nicole thought my labour my slowing. She suggested I move to a standing position to labour for a while which would put more pressure on my cervix. I stood in the kitchen for about half an hour while Ren and Nicole continued boiling water on the stove and pouring it into the birth pool.

After half an hour standing in the kitchen, I needed to rest so I went to the mattress where my water broke. I lay on two pillows in a modified child’s pose for the next while. After some time, Nicole noticed two tiny pieces of poop and asked if I was pushing. I wasn’t sure myself, but she was pretty sure so I got into the birth pool and we called the midwife, Sylvia. I remember not being sure how I would muster the energy and strength to walk across the room to the birth pool. Nicole explained to me it didn’t matter if it took me multiple contractions to get there. The idea of trying to get anywhere while my legs felt like they wanted to fly off my body seemed so awful that after the next contraction I shot up and “ran” over to the pool. 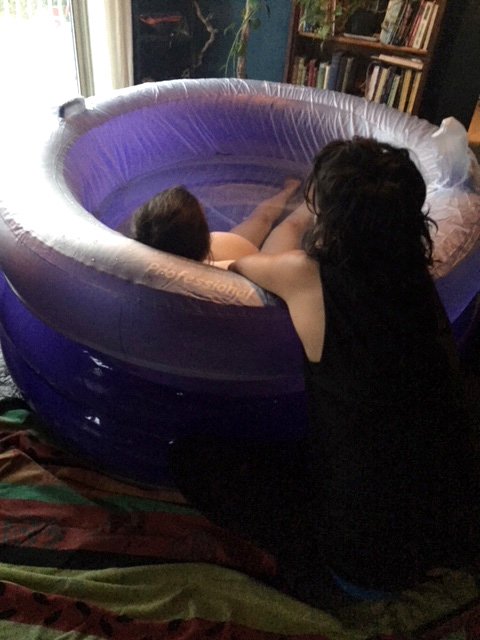 Once in the birth pool, Ren came and held me from behind. Nicole told me not the push until Sylvia arrived so I crossed my legs at the ankles and did my best to breathe through the contractions that came. As Sylvia was pulling up, one contraction felt especially “sharp” and I looked at Nicole quite panicked knowing I couldn’t hold the baby in much longer.

Once Sylvia arrived, Nicole told me I could do what my body needed to do so with the next contraction I didn’t hold back. Sylvia was in the driveway when that contraction came and Nicole saw the baby’s head. She opened the patio door behind her and called Sylvia to hurry inside where she promptly whipped off her shirt to catch the baby. 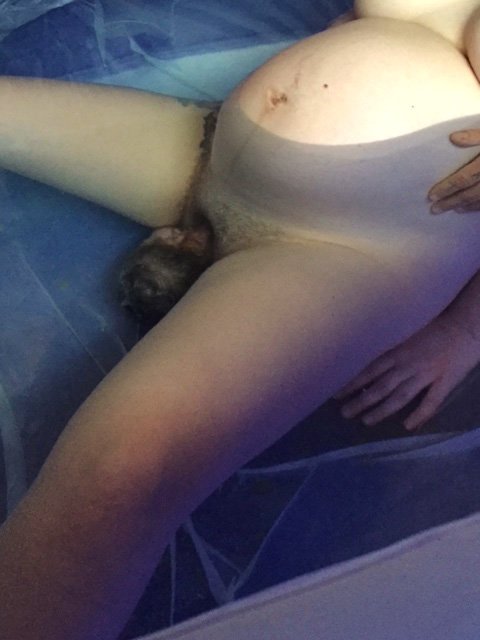 With the next contraction River’s head started crowning, and I held my pelvic floor muscles tightly not wanting to lose any ground. Later on, Nicole told me how impressed she was with my ability to do that. With the next push, River’s head was out and while we waited for the next contraction Sylvia said, “Your baby doesn’t know it’s been born,” which rang in my ears for some time after. I confirmed that it was possible to get the baby out with one final push as I felt the contraction coming. Sylvia grabbed River and pulled her out of me as I pushed. She laid her on my chest as Ren cried and River looked up at me while I said her name and held her as we started our journey together as a family. 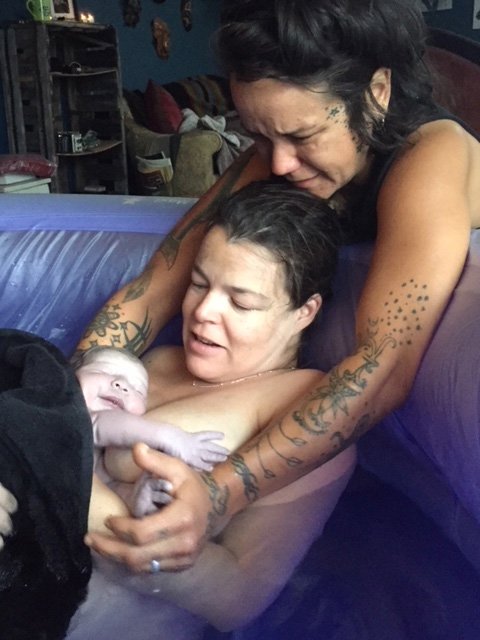