Editor’s note: We believe that all birth stories and all birth experiences matter. This post is part of an ongoing series of birth stories submitted by readers and fellow bloggers, featuring a diverse range of women and their birth experiences. Today’s story is from Mallory of One Nerdy Momma who has generously shared the scheduled repeat C-section birth of her second son. If you would like to share your own birth story, please visit this post to learn how. ~Olivia

I have been married to a wonderful man for nearly 7 years, and am now the proud SAHM of 2 gorgeous, brilliant little boys. With my first delivery, things got complicated rather quickly and I ended up having an “emergency c-section”. I put it in quotes because the staff and my OB were all very calm and made it seem like no big deal. I found out later that it was actually a lot scarier than they let me believe, but I’m very grateful for their casual behavior. That was 2 years ago. This is the story of how we brought our second son into the world.

I spent the early part of my last full week of pregnancy stocking up on groceries and easy meals for the next couple weeks, and trying to get as much laundry done as possible. The day before our scheduled c-section, Connor (our firstborn) and I had an adventure day, because it was our last time to be just the two of us. We went out to breakfast and had a donut date, played at the Children’s Museum with Mema, and went to lunch with Dad before coming home for a good, long nap. Hubby’s sister stayed the night with us on Tuesday and at 8:30 am on Wednesday morning, we checked into the hospital. I really thought I’d be anxious; I thought I wouldn’t get any sleep and have at least one (probably 2) panic attacks before his birth. Instead, I went to bed like normal, slept like normal, and was completely calm all morning. I was a little anxious when we got to the hospital because we were running late and I hate to be late places, but other than that I was good. I shocked myself. No panic attacks, no massive fear or anxiety.

It was a really smooth process; much easier than I expected or experienced with Connor. We were put in the same room that we had for Connor’s delivery, which just made me smile. It almost felt like home, as goofy as that sounds. They placed the IV without any trouble. I did start to blackout a bit when they took a bunch of blood, and then again when they took my blood pressure (lack of food, per their instructions), but I was always alert enough to answer their questions and stay awake. I wasn’t allowed any water, but she gave me a cool, damp wash cloth and kept me talking so I was alright. Hubby was with me the whole time, but watching me almost pass out makes him a little nauseous, so he spent a good chunk of this time seated.

I met several nurses, all of whom were very nice, friendly and made me feel very comfortable. The anesthesiologist came in and walked me through exactly what he was going to do, which I assume was meant to be comforting, but honestly just made me a little nauseous. Then my OB came in. She’s always so happy and peppy when she comes in. It’s very comforting. I love her. They got the OR ready for us and I walked (new and excited since last time I was already drugged up and got wheeled into the OR in my bed) with Hubby a good bit of the way. We had to drop him off in a waiting room, and then the nurse (Heather) took me to the OR. They would bring him back once they got me numbed up because husbands aren’t allowed to be present for the numbing (too many have passed out seeing it).

The OR was incredibly cold; the nurses ended up wrapping me in a couple of freshly warmed towels to keep me from shivering. It took longer than they’d planned to get the anesthesiologist back to me because he got pulled in to do an epidural for another woman in labor. I totally get that. I didn’t get an epidural. What I got was called a spinal. I drastically prefer it. He did a little shot to numb my back, and then he did an injection between 2 of my vertebrae. The numbing started almost immediately. The best part about it was that I didn’t have any permanent or long-term needles in my spine.

Once the injection was done, I started feeling warm and tingly, they laid me down and things got moving! The nurses brought Hubby back, my doc came in, the curtain was up and they started. I was really happy with how alert I was, considering how out of it I was with Connor, I had no idea what to expect. I was chatting it up with everyone, including my doctor while she was working on me.

This surgery took longer than the one with Connor, but I think that’s just because they weren’t in a rush; Kylar wasn’t in distress. It took nearly an hour from the time they brought me back to the OR until they wheeled me out. Hubby was with me, looking the opposite direction, trying with all his might not to see over the curtain. When they pulled Kylar out, the first thing my doctor said was “Whoa, he’s a big one! How did you fit him in there?” My first thought: THANK YOU!! I’ve been complaining for months that this one was harder than Connor. Turns out, Kylar was 1.25 pounds heavier than Connor and a full inch longer. Big baby, tiny living space.

I didn’t cry. I was really impressed by that; I expected to cry a lot. Hubby went with him to watch him get weighed and take a couple pictures, then they bundled him up and I got to have him, skin-to-skin, for the first time. I didn’t have that opportunity with Connor, but I was all over it with Kylar. The nurse even took Hubby’s camera and snapped a couple shots of the three of us. I really appreciate her doing that. Unfortunately, I started to feel nauseous and weak about 5 minutes into my skin-to-skin time, so I asked the nurse to take him back because I was afraid I’d drop him. He spent the rest of the surgery by my head, in my husband’s arms while we stared in wonder.

We made him. The combination of our genes turned into this gorgeous, giant little man with near-black hair and the cutest cry you’ve ever heard. We spent the next 3 hours alone in our room, learning to breastfeed and trying to find the balance in the meds that kept me comfortable, but not nauseous. I ended up being on a clear liquids diet for the first day and wasn’t allowed to eat real food until lunch on the second day.

Connor loves his brother. I’ll end up writing more specifically about that later, so I won’t go into too much detail now, but he loves the baby and he’s an amazing big brother. I honestly couldn’t have imagined this going any better. We are so lucky to have these two wonderful little boys. I feel like we are whole now. Our little family is perfect and complete. 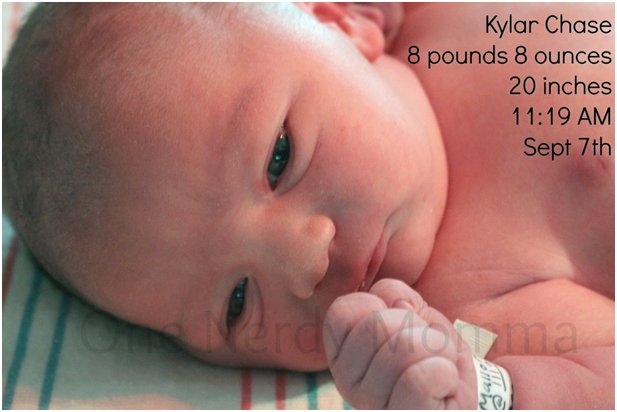