“Johnny Depp and Armie Hammer star in The Lone Ranger, from Jerry Bruckheimer Films and Director Gore Verbinski. It’s a wild ride of high velocity action, explosions and gunfights that brings the famed masked legend to life through brand-new eyes. The Lone Ranger (Hammer), the last of his kind, teams with Tonto (Depp), a dark and mysterious vigilante, to seek vengeance after justice has failed them. It’s a runaway train of epic surprises, as these two unlikely heroes must learn to work together before the ultimate showdown between good and evil explodes.” 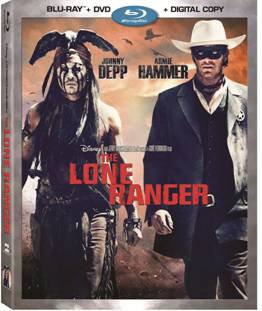 Hubs and I watched this over the course of two nights after putting the kids to bed. Right off the bat, this was not The Lone Ranger I remember watching in weekend reruns when I was a kid. You know how some movies are rated PG and you wonder why? No confusion about that here. This movie is definitely not for the under 13 crowd. There is a lot of gunplay (obviously), plenty of random killing, a massacre, and somebody gets their heart cut out and eaten. Yerk.

To be honest, at times I wasn’t completely sure what the movie was trying to be. The Lone Ranger is part drama, part action movie, part buddy comedy, and there’s this mystical scene in the desert with cannibalistic rabbits that I didn’t actually get the point of. I’ve been a Johnny Depp fan since they used to film 21 Jump Street at my high school, but I can’t help but wonder if they couldn’t have found a Native American actor to play Tonto. That said, I think he definitely stole the show.

We waited two hours to get to the William Tell Overture (Where does the Lone Ranger take his garbage? To the dump, to the dump, to the dump, dump, dump!), and it was so much fun when we finally got there. Right away I started humming the classic theme under my breath, and I thoroughly enjoyed the incredibly fun and over-the-top stunts throughout the whole finale sequence. Surprisingly, galloping Silver along the top of a moving train was not the most unlikely part.

Overall, I enjoyed this movie more than hubs, but he’s never seen the original TV series (gasp!) and I don’t think he has the same appreciation for Johnny Depp as I do, if you know what I mean.

Disclosure: I received a sample item for review. All opinions are completely honest and my own, based on my personal experience. Your experience may differ.