Have you met Elmo? He’s a good friend of ours. My girls and him go way back. He came to Tee’s second birthday party and helped decorate her cake. He plays with my kids and keeps them amused while I’m making dinner or doing the dishes. My girls visit him on Sesame Street, and they make music and dance together.

So we were all really excited to find out that Elmo was coming to stay with us, along with his three friends Prince Elmo, Cowboy Elmo, and Captain Elmo. When he finally arrived, my kids impatiently circled me like hungry lions around an antelope as I worked to get Elmo out of his box. 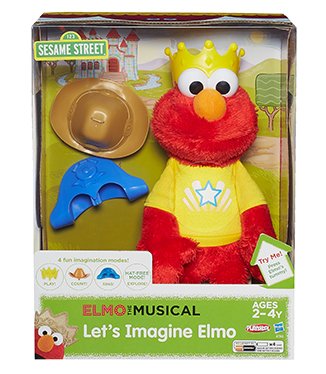 Depending on which hat he’s wearing, Let’s Imagine Elmo has four interactive play modes – a playful prince, a counting cowboy, a singing sea captain, and just himself.

When we put his cowboy hat on, Cowboy Elmo invites Kay to squeeze his nose and count along with him. She’s pretty good up to about 14, but he’s helping her learn all the way up to 20. 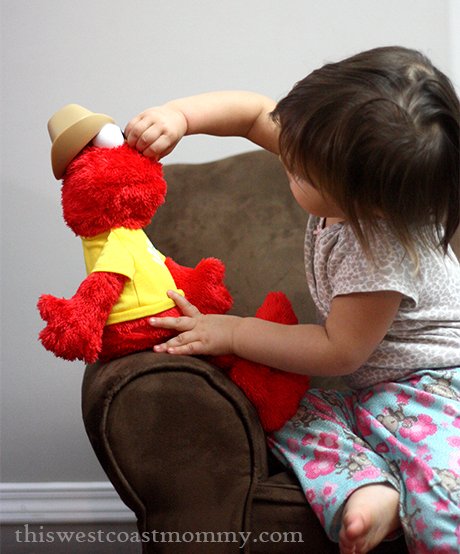 With his sea captain hat on, Captain Elmo sings and plays a sounds-of-the-sea identification game. After introducing one of four ocean sounds (seagull, dolphin, horn, or bell), he plays music with the sounds embedded and the kids squeeze his tummy when they hear the sound he’s looking for. And when Elmo doesn’t have a hat on, the girls can bounce him, tickle his tummy, and squeeze his nose to hear him talk and laugh.

Of course kids aren’t limited by the built-in functions. Pirate Tee and Captain Elmo went on a treasure hunting adventure the other day. 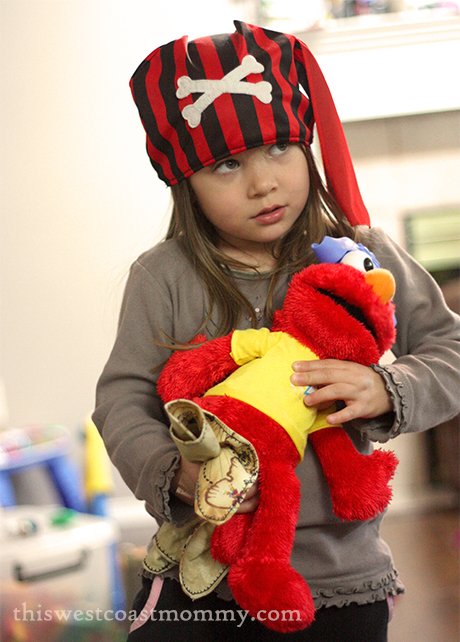 And Kay took Prince Elmo for a piggy back ride around the house. 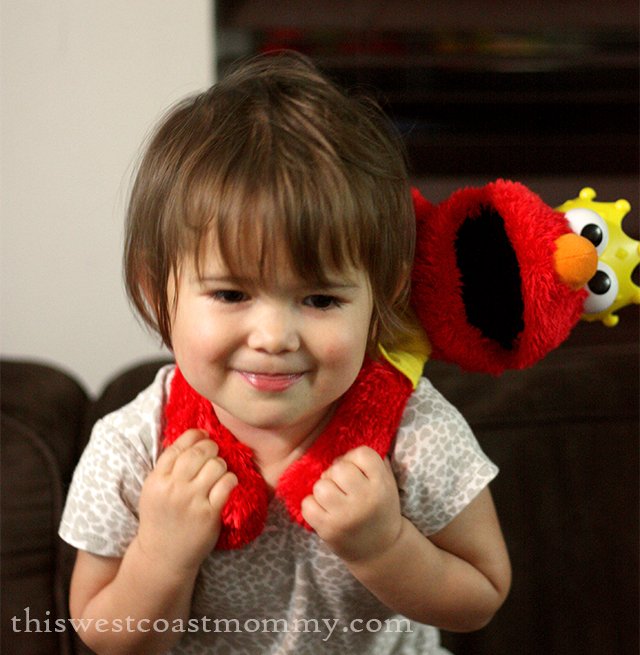 A couple of thoughts about these hats. I wish there were some kind of built in storage or system for keeping them together. We’ve already been on several “hat hunts” in our house, and I know there’ll be more. Two-year-old Kay gets frustrated sometimes that she isn’t able to put the hats on by herself, but four-year-old Tee doesn’t have any trouble.

My one peeve? There’s no volume control. I firmly believe that any talking or noise-making toy should have some kind of volume control, or at least a “Mommy has a headache” setting. Despite this, Elmo has been a welcome friend in our home, and the girls love his company. I suspect Let’s Imagine Elmo will be a hot toy this Christmas! 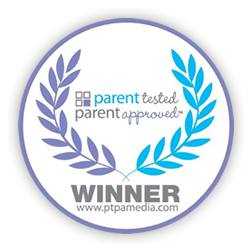 Enter below for your chance to win one of five Let’s Imagine Elmo toys! This giveaway is open to residents of Canada aged 18+, excluding Quebec.

Check out my other open giveaways listed in the right sidebar!

Let’s Imagine Elmo
Disclosure: I am a part of the PTPA Brand Ambassador Program with Hasbro, and I received compensation as part of my affiliation with this group. The opinions on this blog are my own.