I never put much thought into a birth plan. I had hoped for an all natural unmedicated dream birth with my first pregnancy, but I was just excited to have a healthy baby in my arms.

I had heard from a friend that I would know when I was in labour because there is something called a “bloody show.” A “bloody show” is what I saw when I woke up at 10:30pm the night of January 12th, 2014, at 38+2 weeks. I coughed and felt a gush of what I thought was my water breaking. It was actually more like a murder scene according to my husband. A little worried, I asked him to call the maternity ward to ask if it was normal and what we should do.

Following the nurse’s instructions, we headed to the hospital which was only a couple minutes away to get checked. After arriving, the nurse asked me to give a urine sample which she quickly saw was mostly blood. Even though she stayed calm, I could tell something was not right.

I got hooked up to the non-stress test, and they assured me my baby girl was fine at this point so not to worry and wait for the doctor to arrive. The panic started to set in once the doctor arrived. She was doing an internal exam but had to keep asking the nurse to hand her cotton to soak up the blood. She said, “Ok, yep… Ok, that’s a lot of blood. I can’t see anything,” and left the room.

The nurse came back in and told us they had called the specialist in who does c-sections and we were going to have our baby tonight. After the doctor arrived everything happened very fast! She told me I was having a placental abruption and the best thing was to do a c-section right away. I was given a form to sign as I was getting on a gurney and rolled down to the operating room.

Placental abruption is a serious condition in which the placenta partially or completely separates from a woman’s uterus before the baby is born. A placental abruption can deprive the baby of oxygen and nutrients, as well as cause severe bleeding that can be dangerous to both mother and child.

While lying in the OR, the anesthesiologist was asking me questions and explaining the epidural when I felt another big gush of blood. I told the doctor, and she looked and said, “Ok, how long will this take?” The anesthesiologist responded, “Five minutes.” There was some talking between them and I heard, “Ok, we are putting you out.” They laid me back, strapped my arms down and put a mask over my face. I panicked and and tried to move around and yelled, “I can’t breathe!” I felt a weird lump in my throat and thought I was dying. The next thing I knew I was waking up to the feeling of a tube being pulled out of my throat and I was crying.

Paisley was born just after midnight on January 13th, healthy as can be, with strawberry blonde hair. 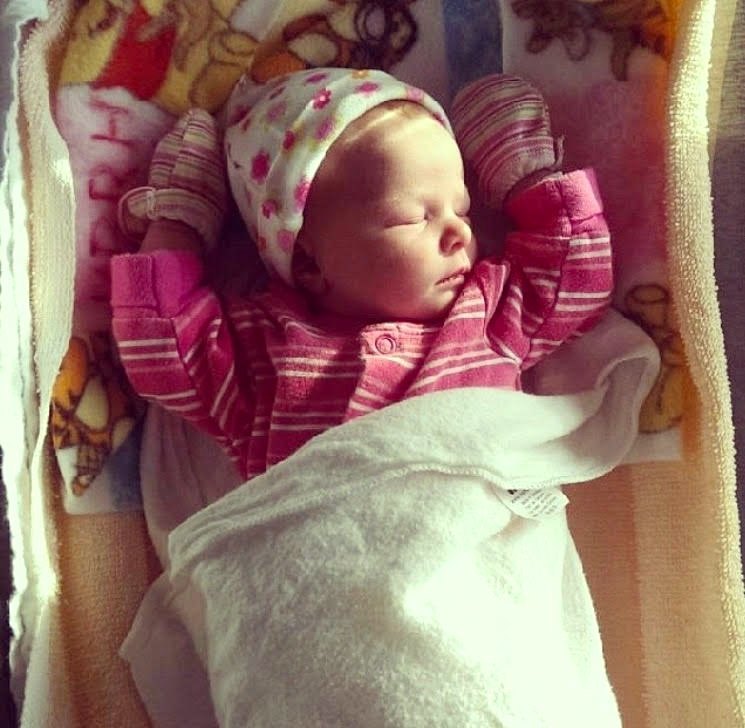 The next couple days were a blur of IVs to get my uterus to contract to stop the bleeding, and trying to breastfeed, and getting a blood transfusion because I had lost around two litres of blood. I just remember being exhausted and out of it. I didn’t get to change my baby’s first diaper, and she was given formula right away before I was out of recovery. She still didn’t have a proper latch before we left the hospital, but we were able to wean her off formula and exclusively breastfeed until 17 months. The most important thing for me was that I had a healthy baby even after her crazy arrival!