In November of 2014, my husband, Matt, and I decided we were ready to have a baby. We stopped using protection, and were surprised to find we got pregnant right away. I found out on December 15th, and we had such a fun time telling our families at Christmas. My due date was August 22nd.

Matt’s sister, Nikki, also found out she was pregnant in December, and was planning her third home birth for her fourth child. I met with a midwife in January and told her I wanted a natural birth in the hospital. When she asked if I wanted a home birth, I thought, “No way!” But as the weeks went by, and I spoke to Nikki more about her home birth experiences, I began to come around to the idea, and by May, I was determined to birth my baby at home. I had read hypnobirthing books, I had researched birthing positions and practised relaxation techniques. I had joined home birth groups on Facebook and talked with other home birthers, but mostly Nikki, who was so excited for my decision. I felt confident. 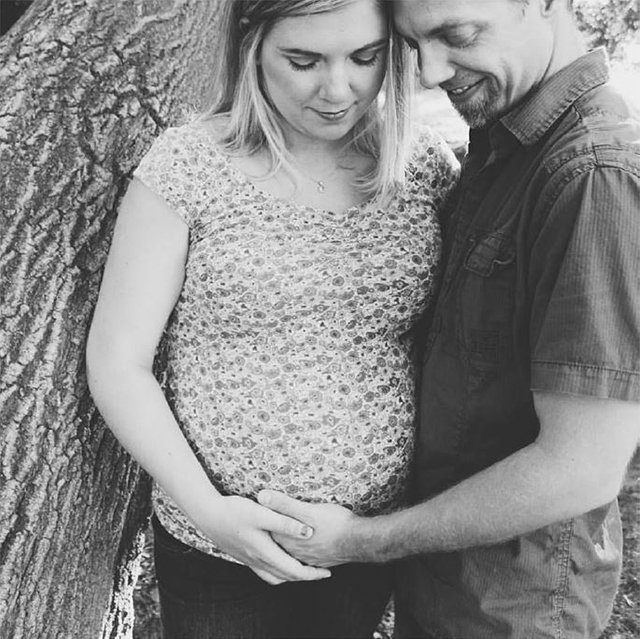 On September 1st, around 3:00am, I woke up and realized my water was breaking. We called my midwife who said I should go back to sleep and get some rest. Boy, do I wish I had. I couldn’t sleep and was awake until about 6:00am. I woke up at 10:00am to contractions. That day was spent walking, bouncing on an exercise ball, watching Friends, talking with Mom and Matt, and staying as relaxed as possible.

My sister-in-law, Amanda, came in the evening and we went for another walk. I had a few contractions on the walk, and when I got back, things started to ramp up a bit more. I went downstairs to labour in the room I wanted to give birth in. I tried to get some sleep between contractions, but didn’t get much. I called my doula around 3:00am and she came to help. At around 6:00am, I was told it was time to call the midwife. She arrived around 7:00am, and decided not to check me yet.

When she did decide to check me, I wasn’t as dilated as I had hoped, but I tried not to let it faze me. By the afternoon, I was 5cm, and my midwife suggested I get in the birthing tub to help me through my contractions for a while. After an hour, I got out and was checked again. I hadn’t progressed, and my midwife thought that it would be best at that point to transfer into the hospital for oxytocin, as my water had been broken for 36 hours, I had had multiple checks and spent time in the birthing pool, so they were worried about infection.

Matt drove me over to meet the midwife at the hospital and everyone else stayed behind to clean up before coming to the hospital too. The OB came in briefly and asked if I needed anything for pain, but I declined so he left.

A student nurse came in and did my IV and checked me (which in retrospect I realized I could have declined… She was terrible and the IV hurt so bad!). The nurses had a shift change at 7:00 and the nurse that came in was really great. At about that time, my midwife was sent home and a second midwife, whom I had never met took over. Not long after that, I suddenly felt like I had too large an audience and asked everyone to leave. My mom, Amanda, my doula, and the midwife all left, and my nurse asked if she could stay.

I started pushing at about 9:00 when my body wanted to push on its own. At some point the midwife made her way back in, and suggested we try alternate birthing positions, but I was so tired, I had no interest in moving. My nurse told me I had a cervical lip, and every push, she reached in and tried to push the lip over the baby’s head. In retrospect, I also regret that. Her constantly reaching in there caused swelling and by the time the OB was able to come in at midnight, he told me I was very swollen and beginning to tear in a bad direction. He suggested I have an episiotomy. At that point, I was so exhausted and I knew the episiotomy would help the baby come out a little sooner, so I agreed. I was told later that I was snoring between contractions, which explains why they felt endless.

Several minutes later, I was told the baby’s heart rate was dropping and if I didn’t get her out the next push or before it dropped under 100, he would use the vacuum. So the next contraction came and I gave it everything I had. The OB told me to slow down! At 12:15am on September 3rd, our beautiful baby was born. The doctor’s assistant said “She’s out!” and that’s how we found out she was a girl. I was so thrilled.

The OB asked for a clamp for the cord right away, and I yelled, “No!” but it was too late, and they put her on my chest. The nurse said something about how it was necessary, but I was disappointed because I wanted delayed cord clamping and for my mom to cut the cord. But for the time being, I didn’t let it bother me. I was too busy meeting my daughter. She was beautiful. Perfect in every way. I couldn’t believe we had a girl. I remember when they took her to check her over, I had to close one eye to focus on her because I was so tired. 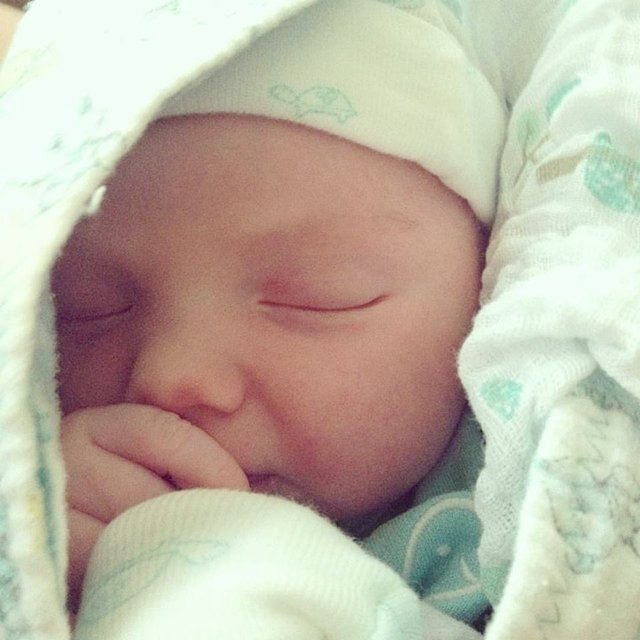 I couldn’t fight sleep any longer, so my midwife and my mom made sure the baby nursed as I slept. I’m very thankful they were there to do that for me, but it also makes me sad that I wasn’t awake to experience the first time she breastfed. My husband held her for the first four hours of her life, which he cherishes, but I grieve. I wish I had had more skin to skin time, been awake for her to breastfeed and bond with her.

For a few days after her birth, I didn’t think about all the things that hadn’t gone to plan, but after a while, negative thoughts crept into my mind, and I began grieving for the experience I didn’t have. I had a really hard time any time anyone posted about their perfect home birth on the groups I was in and eventually stopped following them so I wouldn’t be reminded any more. I kept second-guessing all the decisions I had made during my birth, and wondering, “What if…” I felt guilty that I had negative feelings about her birth, because she was such a perfectly healthy baby, and that should matter more than anything else, right?

I was very thankful that she was happy and healthy, and deep down I did know my feelings were valid and that I was allowed to be disappointed I didn’t get my quiet, calm home birth with no interventions. I hated my episiotomy, I hated that I birthed on my back, legs in stirrups like I had wanted to avoid. I hated the doctor’s assistant for her careless way of revealing the gender. I hated all the checks I had from all the various staff. I hated that my midwife had left. I hated that Eden didn’t get her delayed cord clamping and my mom was robbed of the experience she had so looked forward to – cutting the cord. I hated that I slept through her first few hours of life, and her first nursing session.

Only now, 8 months later, can I look back on it and not break down into tears. I think of her birth as a learning experience. I know what I will do differently next time. I think of the relaxing time I did have at home, labouring at home, listening to my music and looking at my birth affirmations, rocking on my exercise ball, relaxing in my birthing tub. I think of those first few moments on my chest, crying and saying “Matt, we had a girl! It’s a girl!” and her first cry which I reacted to by saying “Don’t cry, baby,” and the nurses reminded me it was a good thing she was crying.

I have learned to dwell on the positive, to appreciate the experience for what it was, and to look forward to my next birth, which is so open to possibilities. I feel empowered that I did get through the 45 hour ordeal with no pain medicine. I feel thrilled that I now have a beautiful little girl who lights up our lives, and has brought more joy than I could have imagined. I realize that the birth was one day (well two, really) and that it isn’t the end of the world that it didn’t go how I wanted. I understand that plans change, and I did make the best choices I could at the time.

I am finally ready to tell my story without bitterness, anger, or hurt. I still have some regret, but I’m letting go of most of my negative feelings about the experience and looking forward to my next birth with hope and excitement. Eden’s may not have been a perfect birth, but I got a perfect baby. And for that, I thank God! I am so thankful for answered prayer (Matt and I both secretly prayed for a girl the whole pregnancy and never told each other until after she was born) and for keeping us both safe throughout her birth. I praise him for knitting together such a wonderful miracle in my womb and for gifting her to us. We have done nothing to deserve such a gift, which is what makes His grace so amazing. We pray He gives us strength and wisdom to raise her to be a strong, faith-filled woman and that she uses her life to bring Him glory. Amen. 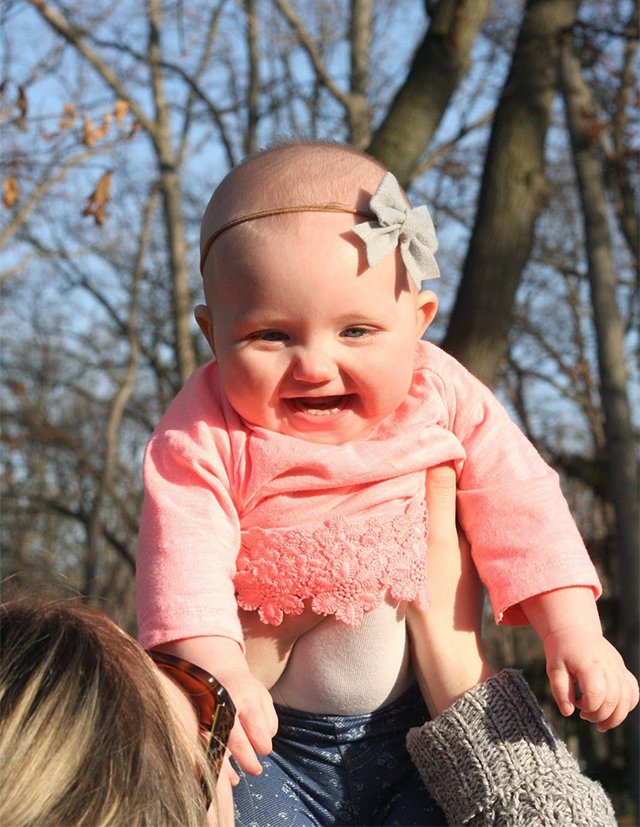