Blast off into a galaxy of adventure, and may the Force be with you!

Star Wars Mission Fleet is a brand new line of vehicles and 2.5-inch-scale figures from Hasbro based on beloved characters from favourite Stars Wars properties like The Skywalker Saga films, The Clone Wars animated series, and The Mandalorian live-action series. 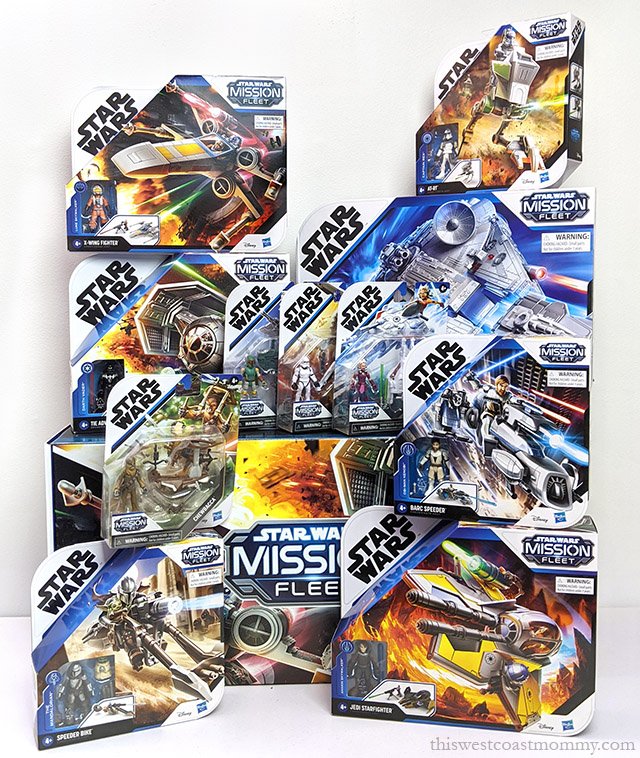 Inspired by iconic moments and powerful characters from the Star Wars galaxy, these fun figures and vehicles allow kids to reenact action-packed battles between the dark side and the light side of the Force. These kid-friendly Star Wars Mission Fleet toys are a wonderful introduction to Star Wars for boys and girls ages 4 and up.

Hasbro recently sent us the new Mission Fleet line to check out just in time for the holiday season. Keep reading for a sneak peak and a giveaway at the end of this post with your chance to win a selection of these for the Star Wars fan in your life!

Imagine all the exciting Star Wars adventures, daring smuggling missions, space chases, and bold escapes that kids can create with Han Solo and the Millennium Falcon! 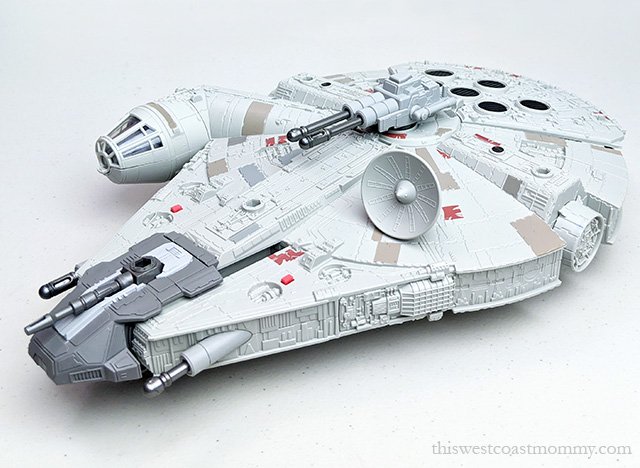 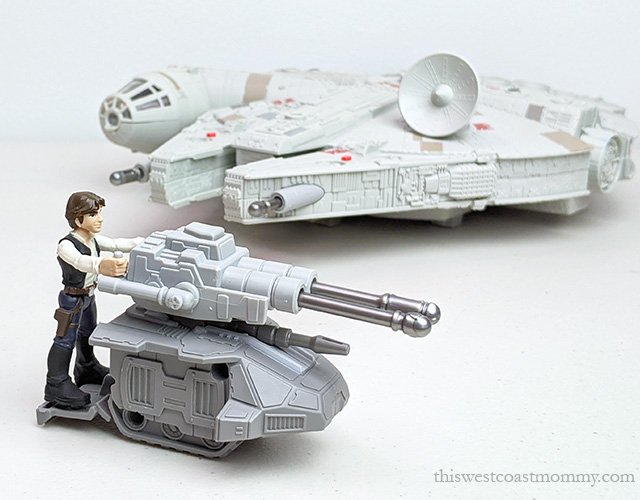 Launch missiles from the movable projectile launcher and from two guns in the front of the ship. The detachable and repositionable projectile launcher can be attached to multiple locations on the ship or placed on top of the mini tank accessory that lets Han Solo take battles to the ground. Remove the detachable cover plate for access inside the ship which also doubles as storage for accessories.

The 2.5-inch-scale Han Solo figure has 7 points of articulation (head, shoulders, wrists, and legs) and details inspired by Star Wars: A New Hope. Han just fits in the cockpit, and he can also sit in the gunner compartment with flip-top access. 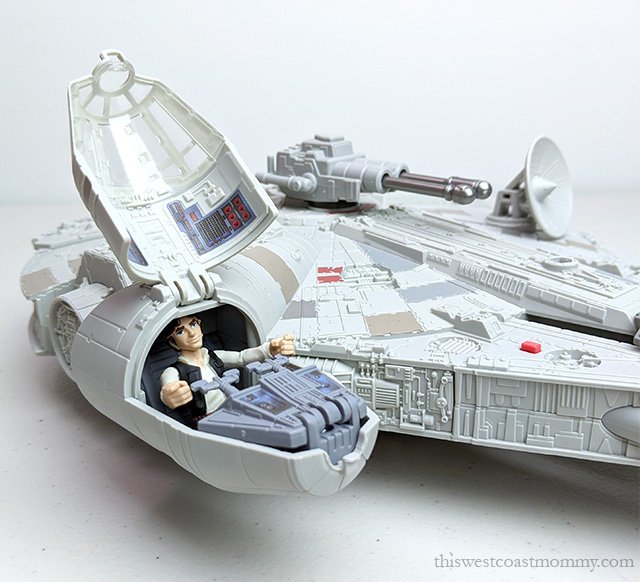 These affordable Stellar Class sets retail for $29.99 CAD/$19.99 USD and feature fan favourite characters and key vehicles from the Star Wars universe. All figures have 7 points of articulation (head, arms, wrists, and legs), and the projectile launchers are all repositionable and interchangeable between vehicles for extra play value. Accessories are also interchangeable between figures and sets.

Darth Vader’s experimental TIE fighter from Star Wars: A New Hope comes to life in the perfect size for little hands to fly around the living room and battle the Rebel Army. 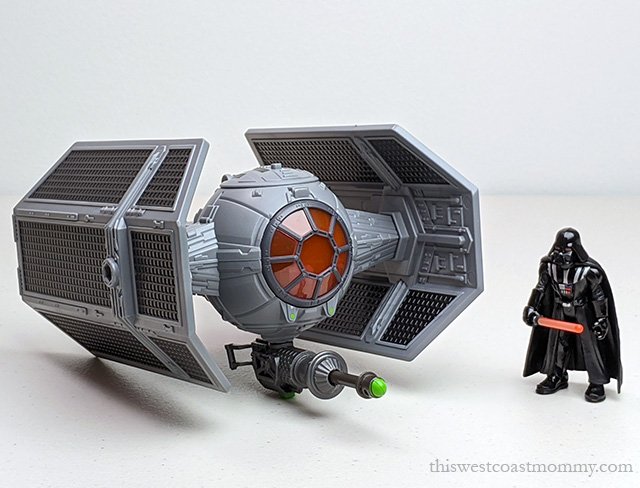 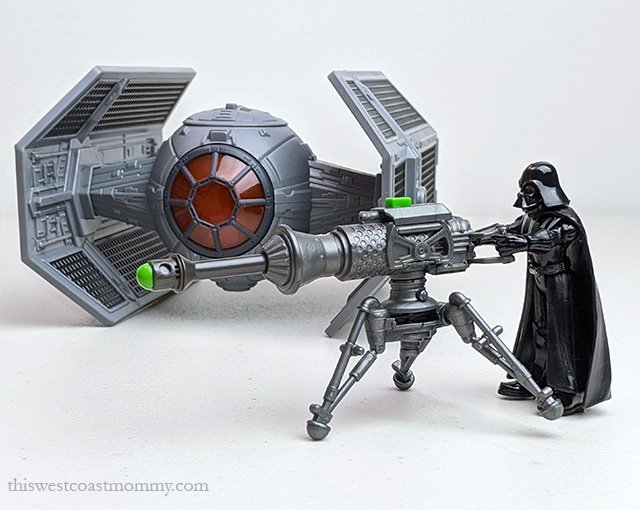 The TIE fighter requires very minimal assembly. Just attach the wings and you’re ready to battle some rebel scum! The detachable and repositionable projectile launcher can be attached to multiple locations on Vader’s ship or mounted on the tripod. The 2.5-inch-scale Darth Vader figure has 7 points of articulation, a red lightsaber, and a vinyl cape which comes off so he can sit inside the TIE fighter cockpit.

Fight back with Luke Skywalker and R2-D2 in the X-Wing fighter he flies to blow up the Death Star in Star Wars: A New Hope. Attach the projectile launcher at multiple points on Luke’s X-Wing or mount it on the included tripod. This set includes the vehicle, 2.5-inch-scale figure, handheld blaster, lightsaber, projectile launcher, tripod mount, and one plasma bolt. 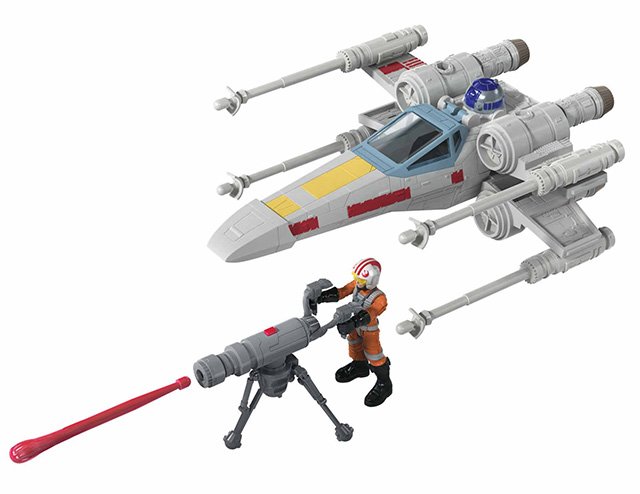 This Jedi Starfighter vehicle and figure set are inspired by Anakin’s mission to the lava planet Mustafar in Star Wars: Revenge of the Sith. R2-D2 comes along for the ride, but he doesn’t separate from the ship. Like the other Mission Fleet sets, the projectile launcher can be attached at multiple points to his fighter or mounted on the tripod accessory. This set includes the vehicle, 2.5-inch-scale figure, lightsaber, projectile launcher, tripod mount, and one plasma bolt. 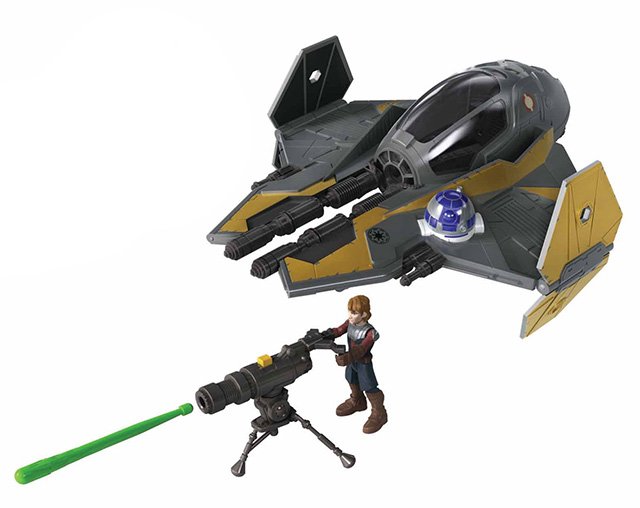 Expedition Class sets retail for $19.99 CAD/$14.99 USD and bring home favourite characters, vehicles, and accessories, all in one small package of fun and adventure.

The Mandalorian Battle for the Bounty Vehicle and Figure

Disney Plus’ live-action series The Mandalorian introduced us to the battle-worn and tight-lipped Mandalorian, a formidable bounty hunter protecting a mysterious alien pursued by bounty hunters on behalf of Imperial interests. 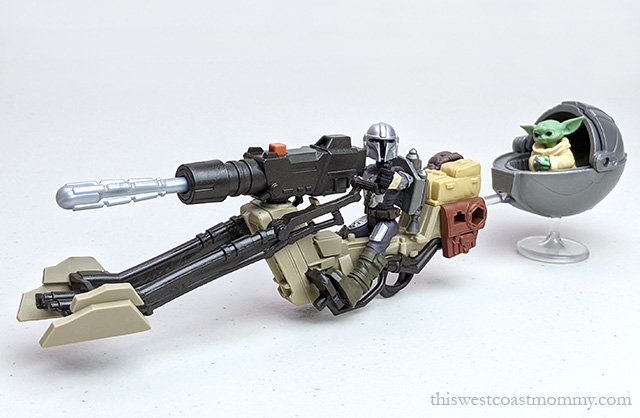 This sure-to-sell-out set lets kids race through the desert with the Mandalorian and Baby Yoda on his speeder bike with repositionable projectile launcher. The 2.5-inch-scale Mandalorian has 7 points of articulation and can wear either a cape or jetpack (both included). The 1-inch-tall Child figure has a ball-jointed head and fits inside the hover-pram which attaches to the back of the speeder bike. 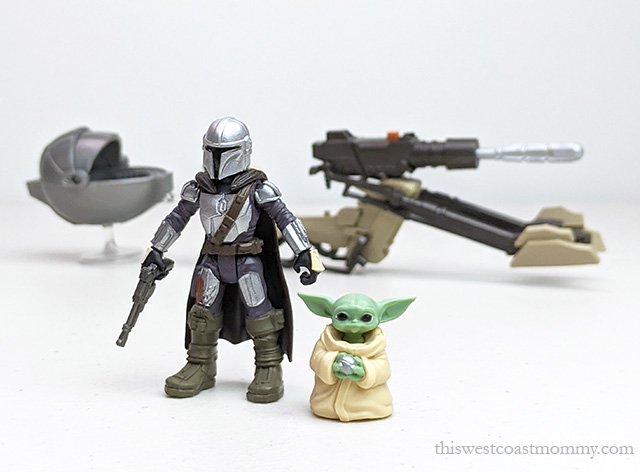 Captain Rex Clone leads the 501st Legion against the Battle Droids in his AT-RT combat vehicle with repositionable projectile launcher. This set is inspired by the Star Wars: The Clone Wars animated series and includes the vehicle, 2.5-inch-scale figure, 2 handheld blasters, projectile launcher, and plasma bolt. 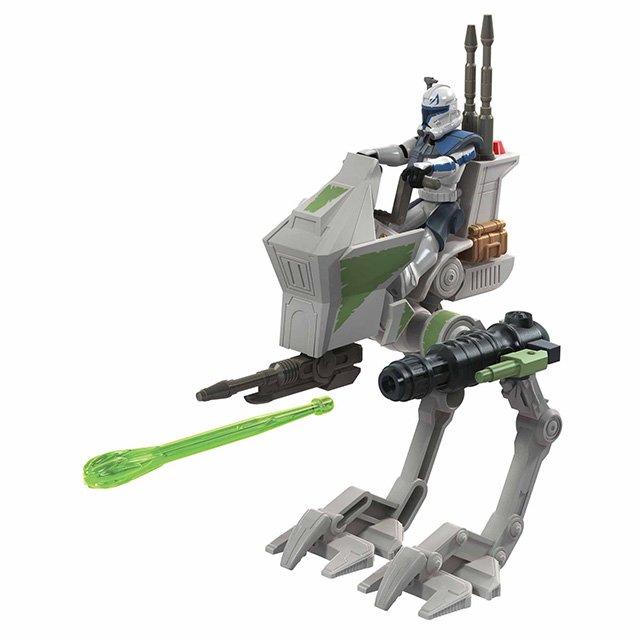 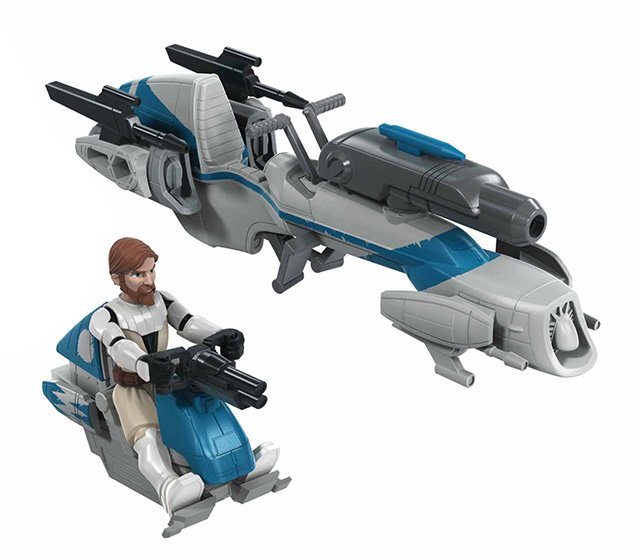 These smaller Gear Class sets are a great way to collect lots of figures and vehicles for hours and hours of play. Each figure comes with its own micro vehicle and extra accessories for a very reasonable price tag of $12.99 CAD/$7.99 USD.

In Star Wars: Revenge of the Sith, Chewbacca and his Wookiee compatriots confront the Separatist Battle Droids on the Wookiee home planet of Kashyyyk. His fluttercraft requires minimal assembly – just put the rotor and clear wings on. This set includes the micro vehicle, 2.5-inch-scale figure, and crossbow. 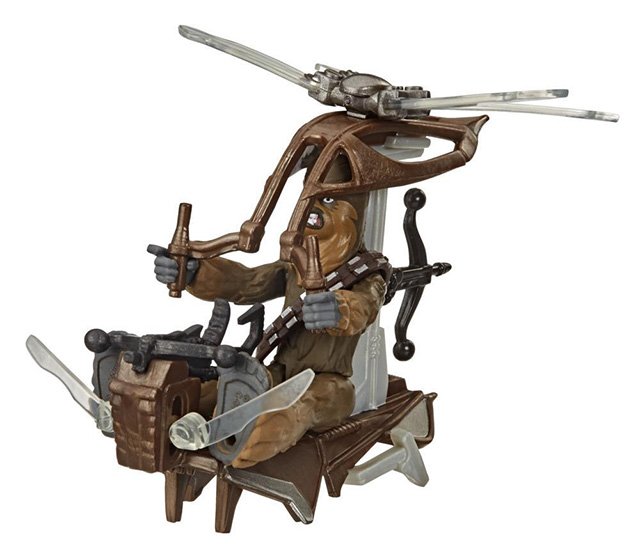 Recreate the daring rescue and battle in the Geonosis Arena from Star Wars: Attack of the Clones. The Clone Trooper’s jetpack wings fold out for flying and down for ground battles. Includes jetpack, 2.5-inch-scale figure, and blaster. 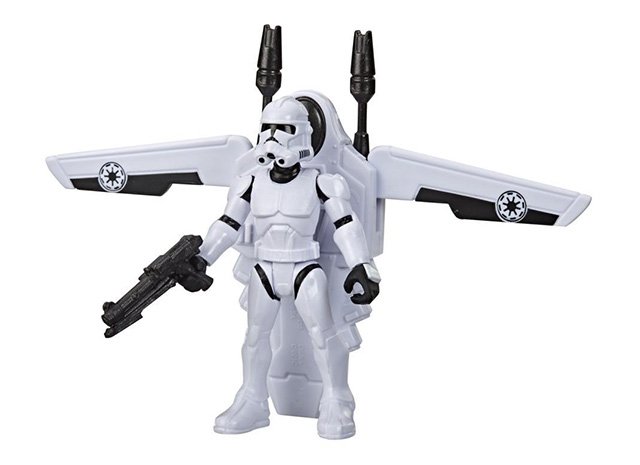 This set is inspired by the scenes with Boba Fett in Cloud City from Star Wars: The Empire Strikes Back. Boba Fett’s jetpack is modeled after the notorious Slave I – the infamous bounty hunter’s fearsome ship – and includes storage for the included blaster accessory. Includes jetpack, 2.5-inch-scale figure, removable mini jetpack, and blaster rifle. 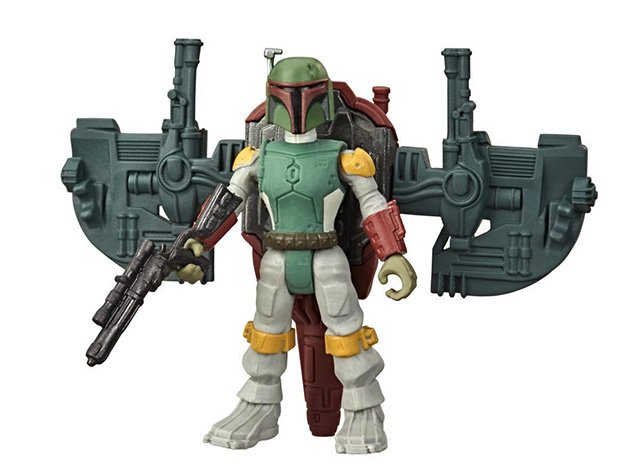 Ahsoka Tano’s aquatic attack vehicle is inspired by the OMS Devilfish Sub from the Star Wars: The Clone Wars animated series and has 2 modes of play. The top flips up to allow Ahsoka to hold onto the handles and ride standing up. This set includes micro vehicle, 2.5-inch-scale figure, and 2 lightsabers. 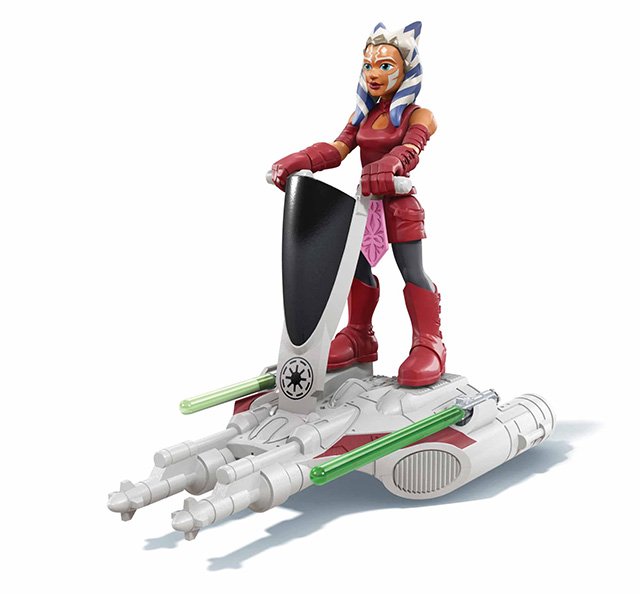 We’re celebrating the release of the newest Star Wars line of toys with a giveaway! Win a Millennium Falcon and Han Solo, along with one vehicle and figure set from each Stellar Class, Expedition Class, and Gear Class.

Enter in the giveaway widget below. This giveaway is open to residents of Canada, 18+. All the winner’s entries will be verified.