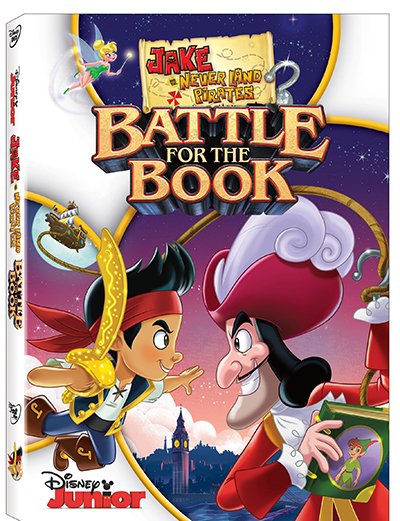 “Set sail for an epic saga stretching from London, all the way to Never Land and back. Before you can say, “Pixie dust, away!” – Wendy, John and Michael Darling join Jake And The Never Land Pirates for a soaring, swashbuckling, full-length adventure.

Captain Hook – fed up with being portrayed as a bumbling fool in Wendy’s magical storybook – flies the Jolly Roger to London and snatches the book away, so Peter Pan calls on Jake and his crew to help save the day. But there’s no time to lose, because the longer Hook has the book, the faster everyone’s memories of Pan and Never Land will fade away… forever! Overflowing with action-packed fun, beloved Peter Pan characters and four additional episodes, Battle For The Book is an unforgettable celebration of teamwork and the magical power of storytelling.”

Let me start by saying the girls had never watched Jake and the Never Land Pirates before seeing this DVD, and I had no idea whether they’d like it or not. But they love dressing up and playing pirates, so I figured they’d enjoy it. And I was right!

Battle for the Book is the two-part Season Three finale aired earlier this year. It’s kind of a crossover movie with Jake and the crew joining forces with Wendy, John, and Michael Darling from the original Peter Pan story to foil Hook’s dastardly plan. Tee does know the Peter Pan story, so those characters were familiar to her.

Of course the kids win in the end, and the movie focuses on the values of friendship, cooperation, and teamwork. As you would expect from a Disney Junior show, the content is appropriate for even toddlers. Captain Hook wasn’t too scary for my two-year-old, and both my kids liked the music and songs. Tee said her favourite part was when (spoiler alert, but not really) Captain Hook turned nice at the end.

The DVD includes four other regular TV episodes. My kids enjoyed watching them, but they definitely liked the main Battle for the Book the most. I think it’s a little more story-based and less questy than the standard episodes.

Tucked inside the DVD was a bonus checkerboard bandana and cardboard “coins” to punch out and play checkers with. She doesn’t actually know how to play checkers yet, but Tee still had a lot of fun pretending to play and carrying her gold doubloons around with her.

You can pick up your copy at Amazon.com or Amazon.ca. 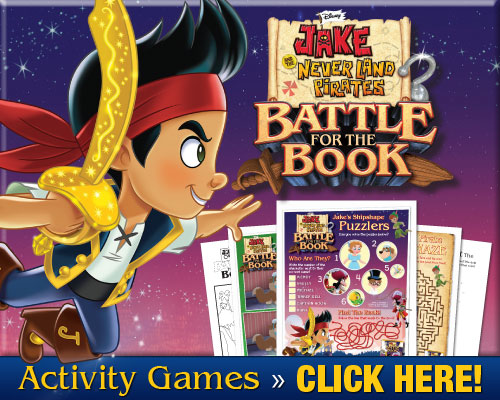