I watched The Incredibles for the first time 14 long years ago. Hubby and I had just begun dating. The Red Sox had just won the World Series for the first time in 86 years, and the European Union welcomed 10 new member states, its largest expansion to date. Britney got married – for the second time that same year. Mark Zuckerberg had just launched TheFacebook, a small start-up whose membership was limited to students from a few select universities. YouTube and Twitter didn’t even exist yet.

So to say we’d been waiting a looong time for this sequel is an understatement. Our family saw Incredibles 2 on opening night, and again when it hit our local drive-in theatre. It’s not often that sequels capture the same magic as the original, but Disney-Pixar has pulled it off. We weren’t the only ones to think that though. Critics and audiences everywhere loved Incredibles 2 just as much as we did, earning the movie a 94% rating on Rotten Tomatoes and surpassing $1 billion at the global box office. Of course we had to add this to our home movie collection. 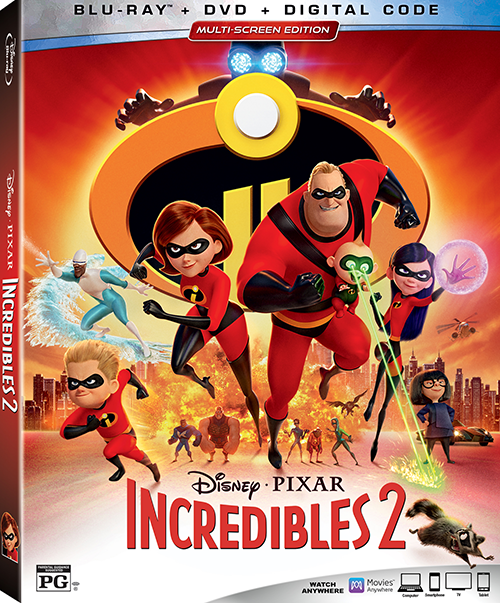 Incredibles 2 is available digitally in HD and 4K Ultra HD, Movies Anywhere on October 23; or bring the adventure home on Blu-ray 4k Ultra HD, Blu-ray, DVD, and On Demand on November 6.

Pick up your copy of Incredibles 2 on Amazon!

I also want to mention the Pixar short “Bao” included with Incredibles 2. Of all the shorts that Pixar has created, this is one of my all-time favourites. Sure, part of that is seeing Chinese characters like my family on the screen, but “Bao” speaks to me as a mother as well. We’re all familiar with that disorienting mix of emotions that only our children can evoke in us – fear, anger, sorrow, but always tempered with overwhelming love. I must admit that even after watching this three times now, I still tear up.

Incredibles 2 begins immediately where The Incredibles left off, with the Parr superhero family trying to stop the Underminer from robbing a bank. They manage to stop him, but do a whole lot of damage in the meantime, leading the government to shut down the Superhero Relocation Program and leaving the Parrs out in the cold.

Fortunately, siblings Winston and Evelyn Deavor offer Helen a new job as Elastigirl, to help the public regain their trust in superheroes. While Helen is away being super, it’s Bob’s turn to stay home and watch the kids, navigate Violet’s teen angst, and try to keep baby Jack-Jack from setting the house on fire with his newfound powers. 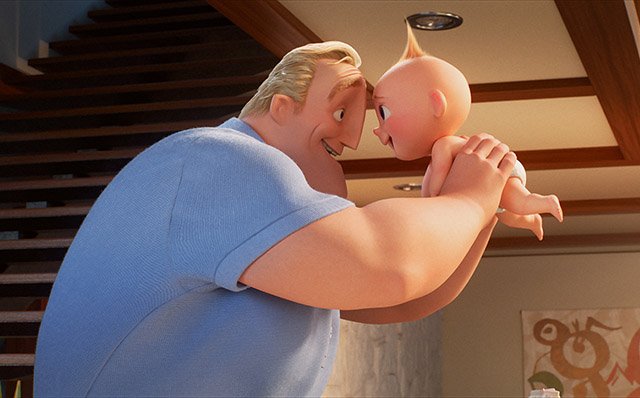 Meanwhile, a new super villain, the Screenslaver, is terrorizing the public with hypnotic images projected through television screens. After a couple of close calls and a dramatic fight scene, Elastigirl captures the Screenslaver, showing the world how valuable superheroes are.

Winston Deavor invites an elite group of world leaders and superheroes from all over the globe to attend a summit on his luxury yacht to proclaim the legalization of superheroes again. With everyone on board, Evelyn is revealed as the actual mastermind behind the Screenslaver and the vindictive architect of a plot to permanently outlaw superheroes when she hypnotizes the supers into aiming Winston’s high-powered ship directly at the city. Violet, Dash, and Jack-Jack save the day by saving Elastigirl from mind-control goggles and helping the superheroes stop the ship and capture Evelyn. 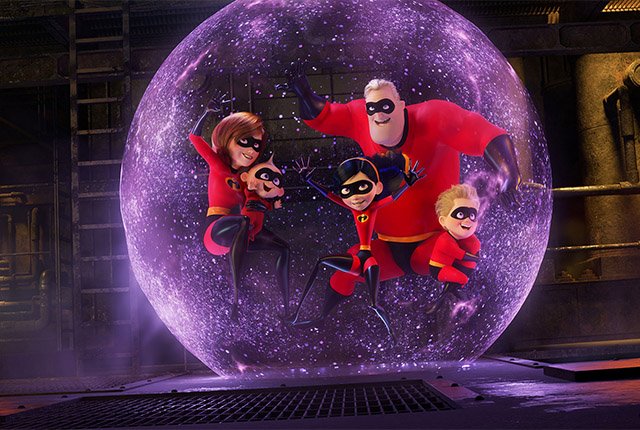 The Blu-ray and digital releases include a brand new short, “Auntie Edna.” In the movie, Bob is exhausted trying to contain Jack-Jack’s new powers and keep him safe. When he visits Edna, she offers to watch him for the night while Bob gets some sleep. But what happens when he stays with Edna?

My daughters often help out on the blog, usually with play testing and modeling duties, but today they’re giving their review of “Auntie Edna”.

Tee: “I thought this was a funny show! I liked seeing all of Jack-Jack’s powers. I also liked the part when Jack-Jack did the fashion show and at the end when he transported himself out of his dad’s car and was waving goodbye.” 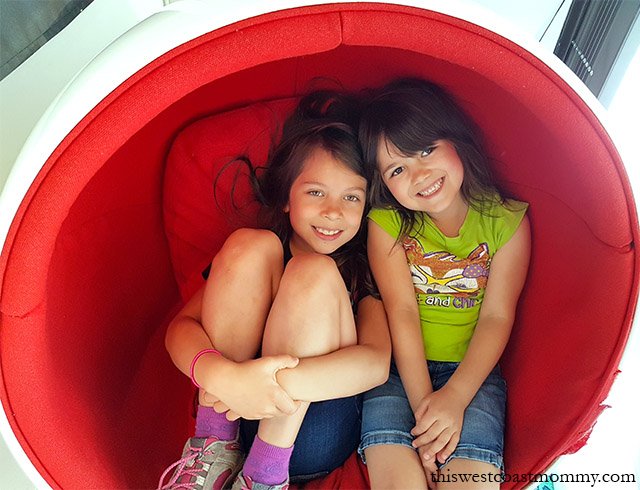 Never-before-seen Incredibles 2 bonus material highlights the beloved characters in the film and the filmmakers who bring them to life, including an all-new mini-movie “Auntie Edna” which gives a glimpse of fashion visionary Edna Mode’s all-night endeavor to design a suit to best harness baby Jack-Jack’s expanding super powers.

Digital Exclusives
• The Coolest Guy in Show Business – In this partially illustrated documentary, Samuel L. Jackson reflects how his childhood and love of comics shaped his passion for film and imaginative storytelling.
• 2 SuperScene Breakdowns – Casual commentary-style pieces looking at specific scenes in the film (The Racoon Fight and Mrs. Incredible) through a particular creative focus like action choreography, set design or story.
Blu-ray & Digital
• All-New “Auntie Edna” Mini-Movie – When Bob Parr visits super-suit designer Edna Mode looking for help with his high-energy toddler Jack-Jack, Edna pulls an all-nighter designing a suit to harness the baby’s seemingly limitless powers.
• 10 Deleted Scenes With Introductions – Suburban Escape, Kari Revisited, Return of the Supers, Chewed Out, Late Audition, Slow Day, Frozone and Honey, Restaurant Robbery, Fashion Show and Security Breakdown.
• Super Stuff – From buildings and vehicles to costumes and props, every action movie requires a lot of really cool stuff. Meet the makers and learn what it takes to design and build such a uniquely incredible world.
• Heroes & Villains – A collection of mini-docs about the backstory and major design ideas behind the Incredibles 2 characters — featuring voice actors, director Brad Bird, and Pixar artists talking about the many elements that make these characters feel real.
• Ralph Eggleston: Production Designer – This short piece explores the many ways a single production designer has influenced the look, feel and character of the Pixar universe, culminating in Incredibles 2.
• Strong Coffee: A Lesson in Animation with Brad Bird – Brad Bird’s passion for animation dates back to his childhood and mentorship under Disney’s Milt Kahl, and that enthusiasm and powerful insight emanates from every film he’s made. Take a deep dive into Brad’s early years at Disney Animation Studios and his time at Pixar.
• Paths to Pixar: Everyday Heroes – At its heart, Incredibles 2 is about family dynamics and the challenges of being a working parent. Meet the parents of Pixar as they discuss their personal connections to the film and their experience with stretching to balance work and family.
• SuperBaby – A documentary/hip hop music video hybrid hosted by Frankie and Paige from Disney Channel’s Bizaardvark. This piece explores how Jack-Jack came to life onscreen — from design to special effects to animation — all set to a hot beat.
• Commentary – Get inside commentary from animators Alan Barillaro (supervising animator), Tony Fucile (supervising animator, story artist and character designer), Dave Mullins (supervising animator) and Bret Parker (animation second unit and crowds supervisor).
• Theatrical Short: “Bao” – An aging Chinese mom suffering from empty nest syndrome gets another chance at motherhood when one of her dumplings springs to life as a lively, giggly dumpling boy.
• Making “Bao” – Director Domee Shi shares her secret recipe for making an animated short — discussing how her rich cultural heritage, unique relationship with her mom, and her love of food all informed the making of the food-fantasy “Bao.”
• Outtakes & Stories – Raccoon Fight Story, Evelyn Animation Outtakes, Puppet Animator Interview, Outtakes Goofy Arms Story and SuperBaby Music Video.
• Character Theme Songs, Vintage Toy Commercial TV Spots , Toolkit Montage and Global Incredibles 2 Trailers

Do you and the kiddos want to get a little more incredible this Halloween or any time? Well, we’ve got you covered! Check out this awesome DIY “Everyday Hero” Incredibles 2 mask and emblem costume! Download these free printables, print them out, cut them out, and go be incredible!

I’ve got a copy of Incredibles 2 to give away to one lucky reader. Enter in the giveaway widget below. This giveaway is open to residents of Canada and the U.S., 18+. All the winner’s entries will be verified.