How Smart is a "Smart Diaper"? | This West Coast Mommy

Let me start by saying I love technology and gadgets. New and improved ways of getting things done? Yes, please! Cool tech that does cool stuff? Why the heck not?

So when I saw the buzz about a “smart diaper” at the Consumer Electronics Show in Las Vegas, I was totally curious.

What makes it smart?

South Korean company Monit has created a cookie-sized device with Bluetooth technology that attaches to the outside of a disposable diaper. The sensor detects whether your baby has done a #1 or #2 based on temperature, humidity, and gas emissions (I shit you not), then sends you a notification on your phone to change your bundle of joy. You can also track data like number of diapers used, pees and poops, and baby’s sleep schedule. 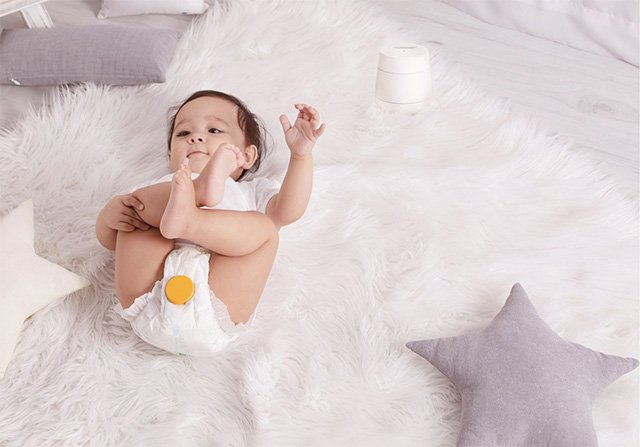 But wait, there’s more! This little doohickey also does double-duty as an air quality monitor (it senses gas emissions, remember?) when plugged into the night light charger.

But is it a smart idea?

I mean, of course you don’t want your baby sitting in a wet diaper or even worse, a poopy one. (Hello, diaper rash!) But is this the answer?

Response to the device has been pretty dismissive, at least among moms I’ve talked to and on my social media. I’ve heard a lot of variations on, “That’s what I have a nose for!”

Or just check the diaper periodically for pee and poo like a regular person lol!

But that takes the fun out of accidentally sticking your fingers in it as you pull the diaper open. ?

Lift baby’s bum to your face and smell. It’s free ?

Not everything needs to have technology, and for your average parent, this definitely seems unnecessary. If you can’t handle the idea of sniffing your baby’s bum, you might not be ready for this whole baby thing. Hold on to your nose, I guarantee you’re in for way worse than a stinky butt!

At first blush, I thought this could be useful at nighttime. With my own kids, it happened more than once that somebody pooped in the middle of the night and I didn’t notice until the next feeding. Or all those occasions I accidentally woke up the baby while checking her diaper.

But the more I thought about having this device attached to a baby, the less it seemed like a good idea. Remember all those stories about wireless headphones, Samsung phones, laptops, and other lithium-ion battery devices catching on fire or exploding? Yeah, that.

Somehow, the idea of attaching a potentially flammable object to my baby, especially while unsupervised, seems…unwise?

Also, while Bluetooth signals use nonionizing radiation which isn’t known to break or alter DNA, there is some research showing it does have a measurable effect on living organisms. There is no substantial body of evidence confirming negative effects on humans, but since developing bodies are more vulnerable to all forms of radiation, limiting that exposure, particularly in very close proximity to your baby’s reproductive organs, just seems like a smarter idea.

In short, this just doesn’t seem like a winner in the cost-benefit equation in my head.

Don’t throw out the baby with the bath water.

Having said all that, I can see situations where that equation might shift though. If your baby has extraordinarily sensitive skin or a medical issue where you need to know right away if they’ve peed or pooped, then perhaps this might make sense at night or when you’re not present.

I can also see a use for these in day cares, hospitals, or nursing homes where diapers tend to be changed on a schedule instead of as needed. Or with the elderly, patients in vegetative states, with dementia, or who might not for whatever reason be able to notify caregivers they need to be cleaned.

Currently the Monit sensor is only available in South Korea and Japan, so we don’t know what the price tag will be in North America. But I can tell you it’s currently selling for 299,000 South Korean won, the equivalent to $267 USD or $350 CAD. Wowzers! That would buy a whole lot of diapers.

Oh, and if you were wondering? No word yet on whether they’ll be coming out with a cloth diaper version.