How Not to Support Breastfeeding in Public | This West Coast Mommy

August 1-7 is World Breastfeeding Week, and this year’s theme is BREASTFEEDING SUPPORT: CLOSE TO MOTHERS. What better time to write about the time I tried to support a mom breastfeeding in public (and failed miserably)?

I was out shopping a few weeks ago when I saw a young mom sitting on a mall bench with her new baby in a wrap. Her baby was crying, obviously hungry, and mom was trying to comfort him. I had my two girls with me, and I looked over at the mama in sympathy. She said, “He’s hungry,” and I smiled and said, “So feed that baby!” She looked flustered and told me she was trying to, but she had a lot of buttons to undo and was trying to figure out how to rearrange her shirt to nurse her little guy so nobody would notice.

Ack! That came out so wrong! I hadn’t meant to be critical of her in any way. What I’d meant to say was that she should just go ahead and feed her baby and not bother worrying about what other people might think. I rushed to explain myself, and I think she understood, but I was mortified that I had probably made her feel more self-conscious. That was the exact opposite of what I had intended.

You see, I think it’s crucial for moms who breastfeed to feel supported to nurse in public. If a mom feels uncomfortable breastfeeding in public, then she either rearranges her life so she’s never out of the house when her baby has to eat (good luck with that one – both my babies ate around the clock their first few months), or (the more likely scenario) she starts bottle feeding and/or formula feeding. Either of those outcomes are likely to interfere with successful breastfeeding, at least to some extent.

New moms have a hard enough time adjusting to motherhood as it is without having to worry that somebody might call them out or criticize them for feeding their baby the way nature intended. We shouldn’t feel like we need to hide. Babies need to and deserve to eat when they’re hungry, and mothers need to and deserve to feed their babies normally. That means in the mall, at a restaurant, in the park, at the doctor’s office, and wherever else mom and baby are. 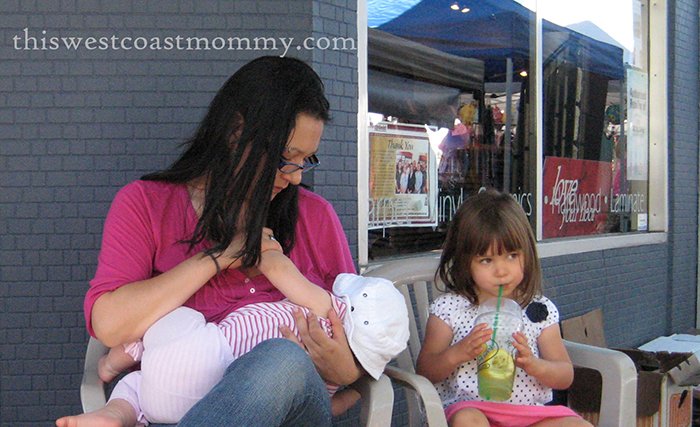 I remember how nervous I felt in the early months with my first baby whenever I was breastfeeding in public. Nobody ever did, but I was so anxious that somebody would give me a dirty look, or say something rude, or ask me to leave. What would I say? What would I do? Here in British Columbia, a mother’s right to breastfeed in any location open to the public is protected under BC’s Human Rights Code. But being aware of your rights is entirely different from actually finding yourself in that kind of a hostile situation with the embarrassment of somebody making rude comments or even telling you to leave, your baby crying, passers by staring at you… While I pride myself on being educated and assertive about my baby’s right to eat, I don’t know if I would be willing to make a scene in that moment. I’d probably leave and then spend the next week beating myself up for not standing my ground.

All of these thoughts are why I’ve been trying to figure out some small friendly thing I could say to support moms I see breastfeeding in public and to acknowledge what a wonderful thing they’re doing. Obviously I need some help with this. I don’t want to come across as condescending or patronizing. What I want to communicate is that I’m just another mom who agrees that feeding your baby when he or she is hungry is normal and so much more important than shielding others from the fact that this is how babies eat. And oh yeah, I think you’re fabulous.

Have you ever said or done something to support a mother breastfeeding in public? If you’re a breastfeeding mom, what might you find supportive?