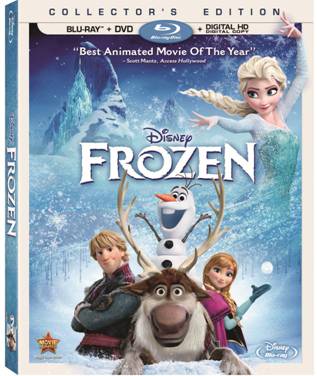 Walt Disney Animation Studios presents a chilly twist on one of the most humorous and heartwarming stories ever told. “Disney Animation’s best since The Lion King” (William Bibbiani, CraveOnline) will melt your heart.

Fearless optimist Anna sets off on an epic journey — teaming up with rugged mountain man Kristoff and his loyal reindeer Sven — to find her sister Elsa, whose icy powers have trapped the kingdom of Arendelle in eternal winter. Encountering Everest-like conditions, mystical trolls and a hilarious snowman named Olaf, Anna and Kristoff battle the elements in a race to save the kingdom.

We’ve been waiting for Frozen to come out on Blu-ray since we were lucky enough to attend a prescreening last November. Tee talks about it all the time, and she’s always asking to watch “Let It Go” on YouTube. I predict we’ll have watched this at least half a dozen times by the end of March break. We’ve already watched it twice, and Tee’s learning the choreography and words to “Let It Go”. The story, the songs (Idina Menzel is my hero!), the trolls, and Olaf all make this our favourite family movie of 2013.

I caught this picture of Tee in her jammies singing along and copying Elsa’s hand motions in “Let It Go.” She really wanted a long purple cloak like Elsa’s, but this pink one was the best we could do in a pinch. 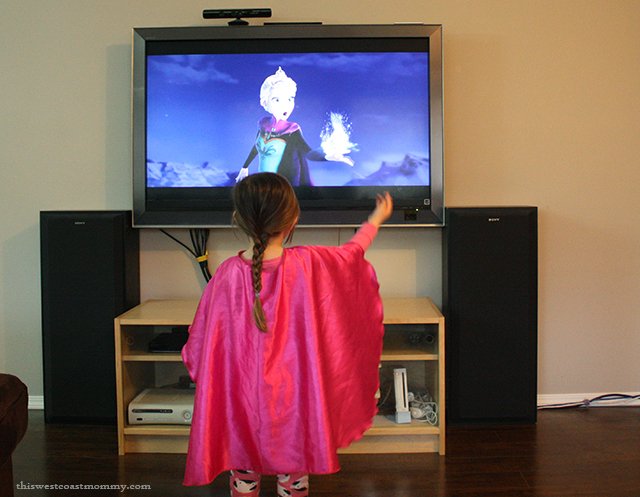 I have a little bonus for you too! Print out these Frozen activity and colouring pages courtesy of Disney for some fun in between repeat viewings. 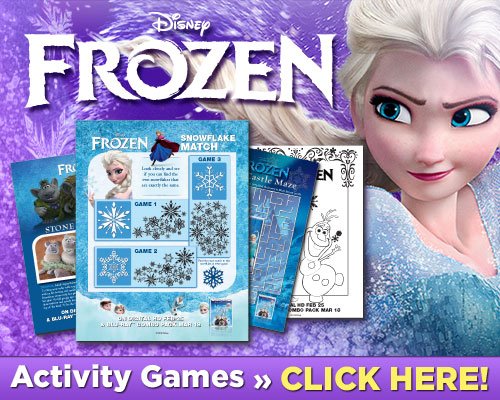 Disclosure: I received a sample item for review. All opinions expressed are completely honest and my own, based on my personal experience. Your experience may differ.