Finding Dory is a Worthy Sequel | This West Coast Mommy

The wait is over! Finding Dory opens today at a theatre near you.

Since Finding Nemo was released 13 years ago, eager fans have been clamouring for a sequel. Sequels are always kind of chancy though. Sometimes they’re really good, but most of the time they kind of aren’t. We had the chance to attend an advance screening of Finding Dory this week, and I can tell you that in this case, the sequel is a worthy successor to the original. 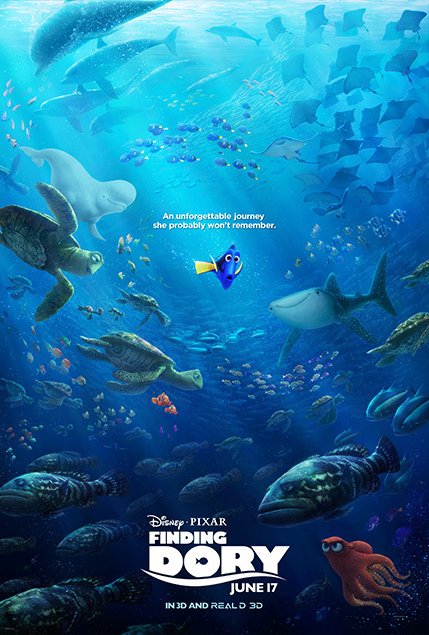 Dory, the lovable blue tang with short-term memory loss, is obviously the star of the movie. Nemo and his dad Marlin are back as supporting characters, along with Destiny the near-sighted nurse shark, Bailey the beluga whale whose echolocation is on the fritz, and Hank the seven-legged octopus. Do you sense a theme here?

The message behind this charming and entertaining movie is that of using the skills you have to overcome disability and limitations. I think that’s a good message for all of us. You don’t have to be missing a limb to feel helpless sometimes, but over the course of the film Dory learns that she is more capable than she knows. As happy-go-lucky Dory likes to say, “Just keep swimming.”

In Finding Dory, our favourite forgetful fish starts to remember glimpses of her parents, and she realizes she has forgotten to keep looking for them. She begs Nemo and Marlin to help her find her family. All they have to go on is the phrase, “Jewel of Morro Bay, California” so they hitch a ride with Crush the sea turtle across the Pacific Ocean to Morro Bay where the mood shifts with a dark, empty ocean floor covered in trash and detritus.

When two researchers find Dory tangled in a six-pack ring, they transport her to the Monterey Marine Life Institute, a rehab center and aquarium. While there, Dory comes to remember more about her parents and realizes that she was born at the Institute (though in reality blue tangs have never been successfully bred in captivity).

Grumpy, antisocial curmudgeon Hank the seven-armed octopus (or septopus) kind of steals the show. He reluctantly agrees to help bubbly, optimistic Dory navigate the aquarium and find her parents, and over the course of the movie, we see him become a real friend. I love the interplay between Hank and Dory, two opposites who nevertheless have wonderful chemistry together.

The movie itself is absolutely stunning. The animated underwater scenes on the reef are gorgeous and filled with shimmering light and colour. The water effects above and below sea level are flawless. One of my favourite scenes came early in, when we witness a majestic stingray migration. In fact it’s this scene of the stingrays going home that sparks the first memories for Dory.

Finding Dory has a more comedic and at times slapstick feel than Finding Nemo did. One of the final scenes where Hank is driving a truck down the highway against traffic before pulling a Thelma and Louise felt a bit over the top to me, but I suppose in a world where fish talk and read English, anything is possible.

There are a few scenes that might be too frightening for younger children. I’m thinking of one particular scene when Dory, Nemo, and Marlin are fleeing from a giant killer squid. I looked over at my three-year-old to see if she was scared. She wasn’t, but I could see other children being frightened. More difficult for some kids might be the topic of losing parents. My kids certainly talked about how sad it was that Dory had lost her parents, and they had questions about what I would do if they were lost. Would I forget them? How would I find them?

Finding Dory is a charming and heartwarming family film in the best tradition of Disney Pixar excellence. Swim, don’t splash, to your nearest theatre to see this soon-to-be classic.

Every Pixar movie starts with a short film, and these are almost as eagerly awaited as the main event. I want to take a minute to mention the Finding Dory‘s short film, Piper. I hadn’t read or heard anything before going to the screening, so I had no idea what we were in for.

As is usual for Pixar shorts, this film has no dialogue. This charming little short follows a frightened baby sandpiper as he ventures onto the beach for the first time and learns to overcome his fear of the water from a tiny hermit crab. The macro-level animation is as gorgeously done as you’d expect, with an amazing level of detail, and the baby sandpiper’s adorable antics had all of us giggling.