On Tuesday night I had the privilege of attending the opening night performance of Beauty and the Beast at the Queen Elizabeth Theatre in Vancouver. Fair warning, I was all of fourteen when the Disney movie version first entered theatres, and it’s impossible for me not to have a soft spot in my heart for Belle and Beast, Mrs. Potts and Chip, Lumiere, Cogsworth, and even Gaston.

In case you’ve been living under a rock for the past 23 years, here’s the story. In the prologue, we learn that the Beast was once a shallow and selfish prince punished for his lack of compassion towards an enchantress in disguise. It always seemed unfair to me why the castle servitors are cursed along with him, but that’s just how the story goes. 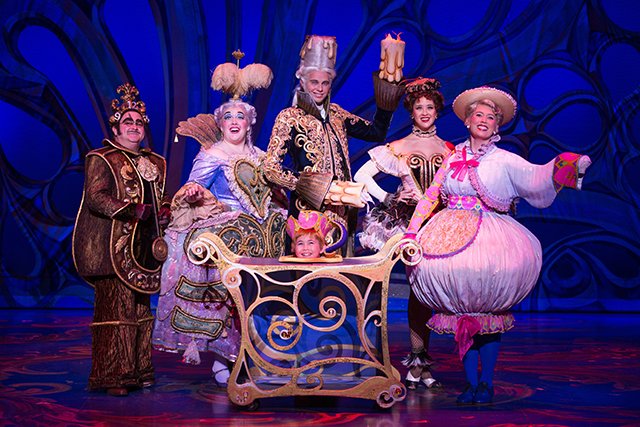 And then we meet Belle, a bookish young woman living with her inventor father in a small village. One day her father becomes lost in the woods, and while being chased by wolves, he takes refuge in the Beast’s castle. The Beast is angry at the intrusion and imprisons him. Belle enters the woods searching for her father and finds her own way to the castle. When she discovers him there she trades herself for her father’s freedom. Belle’s father attempts to get help but none of the villagers believe his tale of the frightening Beast who has stolen his daughter.

Meanwhile, Belle and the Beast clash over his demand that she have dinner with him. Later that evening, she ventures out to explore the castle and finds the magic rose that counts down how much time the Beast has left until the curse is permanent. The Beast becomes angry that she has entered his private space, and frightens her into running away from the castle.

Once in the woods, Belle is set upon by wolves, but the Beast arrives and rescues her. His act of bravery impresses her enough that she stays to care for his injuries, and that begins a new phase in their relationship. They read together, have dinner together, dance together. The Beast realizes that he loves her, and so he frees her to leave and rescue her father who is lost and sick in the woods still searching for her. She finds her father and takes him home to mend. When the villagers realize there really is a Beast living nearby, they form a mob intent on killing him. Gaston makes his way into the castle and stabs the Beast in front of Belle. Now that she is faced with losing him, Belle realizes that she loves the Beast, and the magic of her love transforms him back into a handsome prince. 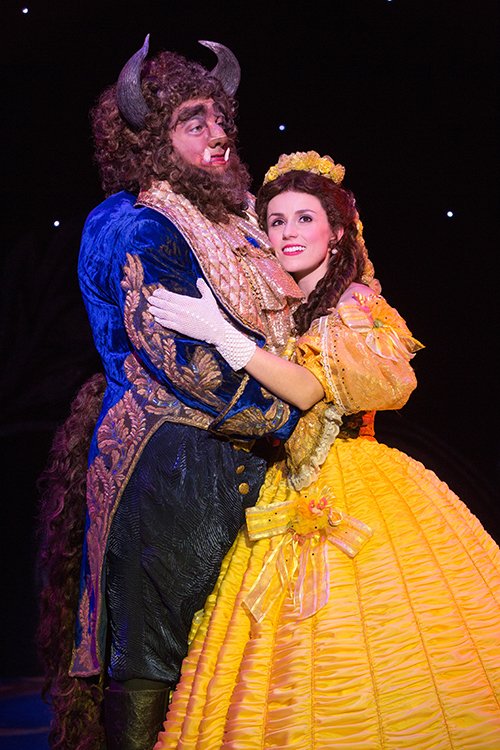 Watching scenes that I remember from the movie being played out live in front of me was tons of fun and an exercise in memory: Was that line in the movie? Was Lumiere quite that raunchy when I was a kid? Why don’t I remember that song? (Turns out the stage musical has seven additional songs composed by Alan Menken and lyrics by Tim Rice.)

The first few minutes seemed to stumble a little with some minor audio issues and the occasional off note, but the cast quickly came together and the rest of the show went ahead smoothly. Of course it is a musical , and the best parts for me were the musical numbers. I couldn’t help but hum along and tap my toes to “Gaston”, and I really enjoyed the fast-paced, intricate clinking beer stein dance that followed. 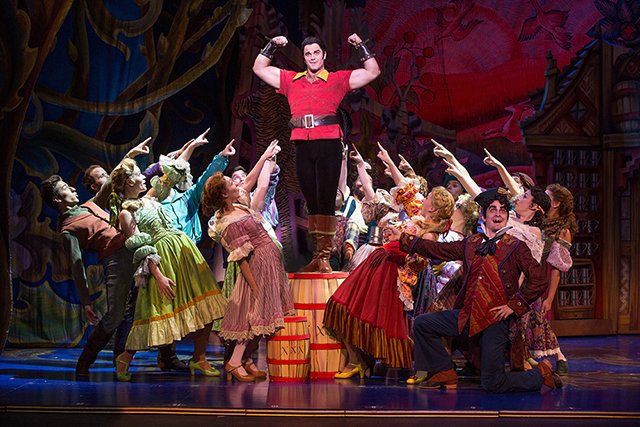 Fan favourite “Be Our Guest” blew my socks off with its lavish costumes and choreography. When the plates transform into top hats, you know somebody’s paying attention to the details! 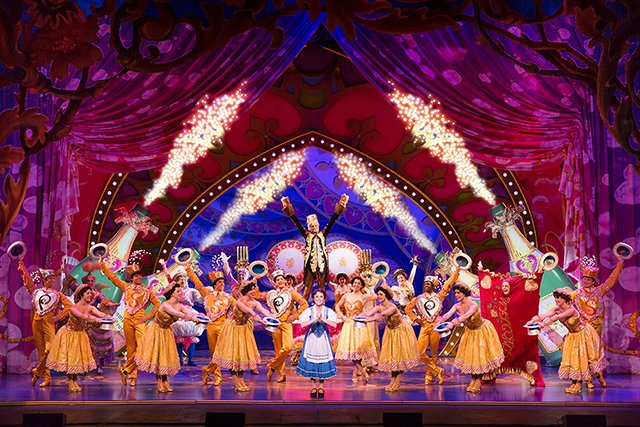 Cameron Bond as the brawny, arrogant Gaston, and Patrick Pevehouse as Lumiere the ladies’ candlestick were standouts to me and got the most laughs from the audience. Jillian Butterfield was strong as Belle, but Ryan Everett Wood’s petulant, short-tempered, but secretly brokenhearted Beast with the surprisingly good tenor was most memorable for me, particularly in his moving rendition of “If I Can’t Love Her” that closed the first act.

“No pain could be deeper,
No life could be cheaper,
No point anymore, if I can’t love her.”

I’m always impressed by how a well-designed set can create so much in such a small space. The night scenes in the woods take place behind a translucent screen, projecting a shadowy, nightmarish feel that works well in the scenes with the wolves (played by life-size puppets). The Beast’s castle set in particular was well done, with a few ornate pieces successfully suggesting a spacious castle with grand staircases and a ballroom.

Overall, this is a fun and entertaining event to bring the whole family. The show runs two hours and 15 minutes with a 20 minute intermission. Be aware that younger children may become restless or frightened by some scenes. You know your child best, but I suggest six years and up.

(Images courtesy of Broadway Across Canada.)

Beauty and the Beast is now playing at the Queen Elizabeth Theatre through Sunday, February 8, 2015. Matinee performances on Saturday and Sunday. Tickets start at $51. Tickets are on sale now at all Ticketmaster outlets, online at www.ticketmaster.ca, or call toll-free 1-855-985-5000.