Win a Copy of Disneynature's Monkey Kingdom Out on Blu-ray September 15 {and Free Printables!} | This West Coast Mommy

Back in April, I was invited to an advance movie screening of Disneynature’s Monkey Kingdom, but I regretfully declined as I wasn’t sure if it would hold my kids’ interest. I thought they might get bored a few minutes in, and I didn’t want to disrupt other movie goers.

Boy, was I wrong. We just received an advance Blu-ray copy of Monkey Kingdom for review and my kids loved it! 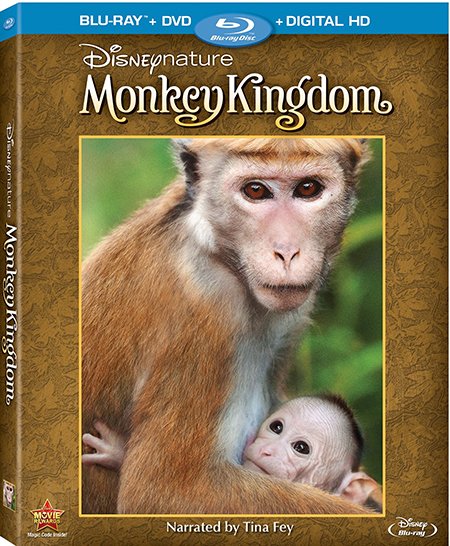 From Disneynature, the studio that brought you Chimpanzee and Bears, comes Monkey Kingdom, a spectacular tale set among ancient ruins in the storied jungles of South Asia. Maya, a clever and resourceful monkey, finds her world forever changed when she welcomes her son Kip into her colorful extended family. As Maya strives to keep Kip safe through unexpected and sometimes perilous adventures, amazing footage captures all the magic and surprises of their magnificent world. Maya and her family will make you laugh and warm your heart as she realizes her dreams for her son’s future. 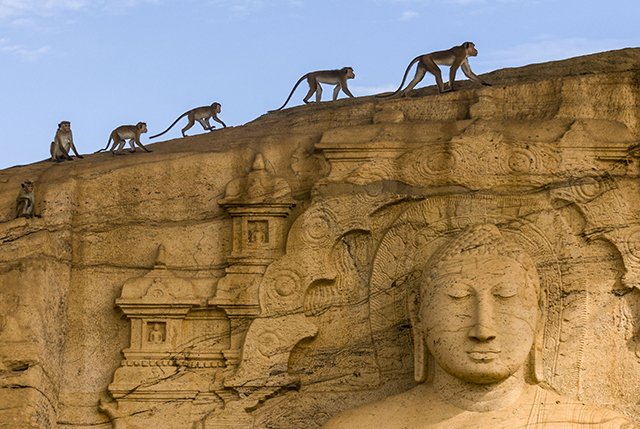 Come on, who doesn’t love monkeys? This spectacular footage was filmed over the course of three years in Sri Lanka and follows a troop of clever toque macaque monkeys. The images are absolutely stunning, and the use of pop music (“Hey, Hey, We’re the Monkees” and “Whatta Man”) keeps it light and entertaining though most of the film. My favourite part is where the monkeys sneak into the village and hang upside down from the roofs snatching food, all to a spy music soundtrack (think Mission: Impossible).

Monkey Kingdom is rated G, but there are a few scenes to be aware of if watching with very young ones. At one point, the monkeys are stalked by a Komodo lizard and one monkey gets pulled under the water. Later on, another group of monkeys attacks our monkeys. There is some teeth baring, and Maya and her troop are driven from their home base at Castle Rock. My three-year-old ran to snuggle up next to me but my five-year-old was unfazed. After the battle, one member of the monkey troop is dead and the other monkeys approach the body, seemingly to say goodbye. We see the obscured shape from farther away and his arm closer up with no other details, but sensitive children may be upset by this.

We all really enjoyed Monkey Kingdom, and I love that it helped start a conversation with my girls about endangered animals, humans’ impact on habitats, and conservation efforts. The toque macaque is on the endangered list, and this movie helps raise awareness. In addition, Disneynature has committed to donating a portion of first-week sales to Conservation International to help protect endangered species in their natural habitats. 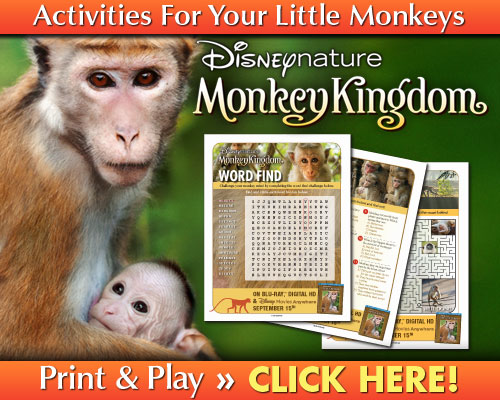 Win Your Own Copy of Monkey Kingdom!

One reader will win their own copy of Disneynature’s Monkey Kingdom on Blu-ray. Enter for your chance to win in the giveaway widget below. This giveaway is open to residents of Canada and the US, 18+. All entries will be verified.